The best business documentaries, movies, and TV shows to stream during your time off 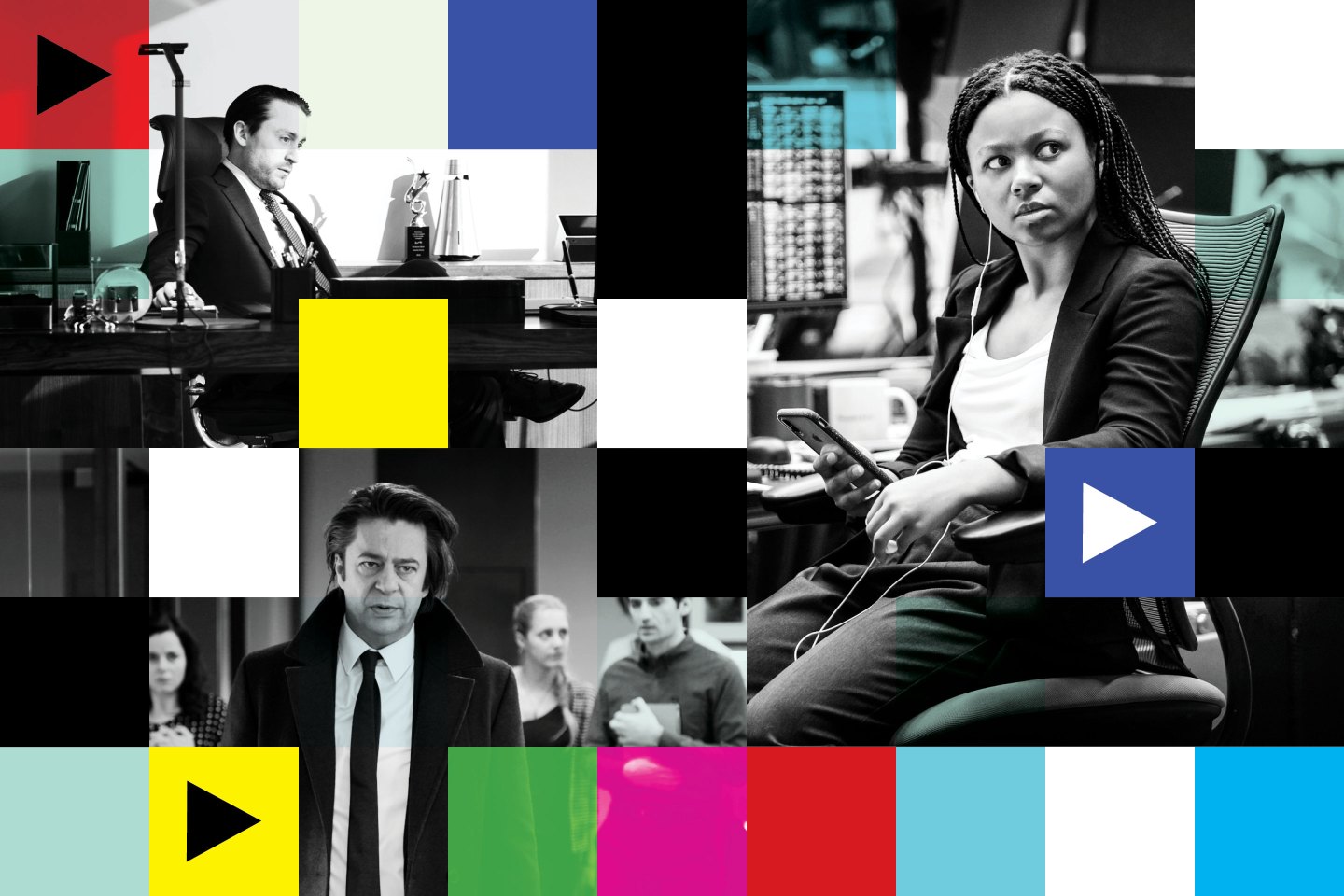 With winter fully underway and stay-at-home orders back in place in many regions, you might be looking for some new (or at least, new to you) content to stream.

Maybe you have some vacation days to kill, or just want something to put on in the background while working from home. Either way, these documentaries, movies, and TV shows will simultaneously entertain and enlighten you for hours upon hours.

Roughly a year after they left the White House, the Obamas inked a multiyear deal with Netflix to produce a number of original documentaries, series, and movies for the streaming service. The first project to debut was American Factory, a documentary about Chinese company Fuyao’s factory in rural Ohio, built on what was once the site of a General Motors plant. Depicting the cultural and economic clashes of high-tech China with working-class America, the 2019 film won the Academy Award for Best Documentary Feature in February 2020.

Photographer Lauren Greenfield attends a press viewing of her exhibition “Generation Wealth.” Her film of the same title, on Amazon, tracks our growing obsession with affluence.
GEORG WENDT—dpa/AFP via Getty Images

While many of the subjects in Generation Wealth might seem concerned only with what is flashy and new at the present moment, American artist and filmmaker Lauren Greenfield put in the long-haul work for this in-depth examination of our growing obsession with wealth in the post–Great Recession era. Production lasted from 2008 to the film’s release in 2017, tracing Greenfield’s journey across the world—with notable stops in Los Angeles, Moscow, and Dubai—as she interviewed not only the international elite (or at least those who consider themselves as such) but also students, single parents, and others suffering under crushing debt, whether from tuition or credit cards or health care bills. Her film makes it impossible for the viewer to look away from the stark economic gap that has only grown wider in the past decade.

Rare is the investigative feature (published online only, not in print) that monopolizes the Internet’s attention so quickly and immensely—on a weekend, no less. By the week after its July 2018 debut, there was already an extra-hot bidding war for the adaptation rights to The Daily Beast’s engrossing exposé about the FBI’s investigation into a complex web of characters who rigged McDonalds’s popular Monopoly game at the turn of the millennium. There is a Hollywood film now in development—with the working title McScam, and Matt Damon and Ben Affleck attached to the project—but HBO’s documentary McMillions looks at the debacle from the FBI’s perspective, featuring numerous interviews with players on both sides of the investigation.

Elizabeth Holmes and her Theranos debacle are parsed in HBO’s “The Inventor: Out for Blood in Silicon Valley.”
Courtesy of HBO

The Inventor: Out for Blood in Silicon Valley

Speaking of notorious scam artists, there might be none more fascinating, peculiar, or infuriating than Theranos founder and CEO Elizabeth Holmes. (Seriously, can you imagine if Theranos was still around in its prime form and trying to peddle COVID tests?) Building off the momentum from Wall Street Journal reporter John Carreyrou’s monumental investigative reporting and subsequent bestseller Bad Blood, which revealed Theranos’s blood tests to be a complete sham, The Inventor adds faces to many of the voices who spoke out and blew the whistle on Theranos—not only to the detriment of their careers but at risk to their personal safety. The Inventor also includes interviews with analysts and journalists who followed Theranos during its rise and fall—among them Fortune’s Roger Parloff, who speaks candidly about his own reporting on the once-wunderkind, now-disgraced Silicon Valley unicorn.

There was a brief period in 2018 when you couldn’t go to a café or bar (indoors even!) in any major city without overhearing a variation on the question, “So, have you watched the Hulu documentary or the Netflix one yet?” This would undoubtedly have been a reference to the almost simultaneously released documentaries about the infamous Fyre Festival in the Bahamas in 2017. No need to go into what happened (in case you missed it) as both documentaries will break it down, but what’s remarkable is that each production comes at the story from different angles with different voices. Quite possibly the only success story to emerge from the mess was the production of these companion documentaries themselves.

Where to watch: Fyre Fraud on Hulu; FYRE on Netflix

Somewhere between 2009 and 2015, food trucks ate the planet. Of course, someone made a movie about one. Written, coproduced, directed by, and starring Jon Favreau, Chef follows a head chef in Los Angeles who up and quits his job amid frustration with a domineering restaurateur and after an altercation with a food critic. Favreau’s character decides to head back to his roots, trying to find his flavor again by launching a food truck in Miami. Word to the wise: Either eat a big meal before watching or plan to eat while streaming. Food is the true star of this film.

Let me get this out of the way right now: This movie is ridiculous. More important: It’s so much fun. Starring Salma Hayek, Tiffany Haddish, and Rose Byrne, the plot follows a pair of childhood friends turned business partners (Haddish and Byrne) who have their own private beauty brand that’s growing a loyal customer base. One of their products happens to catch the eye of a beauty conglomerate bigwig (Hayek), who proposes to buy their business and seemingly promises them creative and financial autonomy. (And, of course, that doesn’t go to plan.)

In what could be the most perfect sports-meets-business movie, 2011’s Moneyball stars Brad Pitt as Oakland Athletics general manager Billy Beane, whose stroke of genius in just trying to balance a budget results in the complete overhaul of Major League Baseball.

Up in the Air

Certainly, there are more soul-killing jobs than being assigned to conduct layoffs at local offices across the country. And yet 2009’s Up in the Air really sits with you long after viewing. George Clooney’s corporate “downsizer,” Ryan Bingham, soon finds himself fighting for his own job amid company budget cuts. (The irony is palpable.) Anna Kendrick’s Natalie Keener brings a bit of levity and humanity to the narrative as a young professional learning the ropes while on tour with a reluctant Bingham. For frequent fliers, the B-plot is most certainly Bingham’s quest to surpass 10 million frequent-flier miles and have his name embossed on a jumbo jet. (Some of us are satisfied with just being bumped up to business class.)

Naive but charming in a way that only a 1980s rom-com could be, Working Girl follows Melanie Griffith’s Tess from Staten Island to Wall Street, and from secretary to businesswoman. Griffith is delightful and bubbly, quick with savvy ideas that often go overlooked owing to her professional station and gender. However, to be perfectly honest, not everything in this movie has aged well. (Sorry to say, but Harrison Ford’s character and dialogue frequently come off as creepy, if not downright sleazy.) Also, Sigourney Weaver’s character is often regarded as the “villain” of this movie. (Okay, she might have stolen a few ideas from Tess.) But looking at it through a 2020 lens, she’s not all that bad. She’s depicted as “unlikable” (that hideous term), but frankly, no one has the right to live in her apartment or use her clothes without permission! Nevertheless, the ending, the soundtrack, and Joan Cusack make this film worth watching over and over and over again.

Where to watch: Hulu

Staff meeting at the talent agency ASK in Netflix’s “Call My Agent!”
Courtesy of Netflix

Step away from Emily in Paris. This is the Paris-set comedy you should be streaming this winter. Originally titled Dix Pour Cent (Ten Percent), Call My Agent! is a satire about cutthroat entertainment agents dealing with all the grunt work for their vain actor clients (played by real French stars).

On the surface, House of Ho might seem as if it’s trying to mooch off the success and popularity of 2018’s Crazy Rich Asians. But this is not your average reality show, and even with all the excessive displays of wealth, this is not anything like Keeping Up With the Kardashians. The HBO series chronicles the lives of a wealthy Vietnamese-American family in Houston. Binh and Hue Ho came to the U.S. during the mass exodus of immigrants from South Vietnam in 1975, and both worked in lower-income jobs for years before launching businesses (a bank and real estate development company) that produced millions, enabling their lavish lifestyle. But their children have only known lives of luxury, and this series homes in on that generational divide between immigrant parents and first-generation American children—to an extreme degree, to be sure, but one that might not seem so foreign to many viewers.

For some of us, it’s hard to imagine or even watch new shows set in office environments, given how many people are working from home indefinitely right now. But HBO’s latest drama series offers a complete escape (at least for most of us normals) from reality in any time period. Industry follows a group of Gen Z professionals competing for jobs at a top investment bank in London. And given that this is HBO, there is a lot of backstabbing and workplace “romances” (if you will).

Siblings (played by Jeremy Strong and Sarah Snook) vie for control of a family media empire in the HBO drama “Succession.”
Courtesy of Peter Kramer—HBO

Where does one even begin with one of HBO’s best shows ever, if not one of the best shows on television ever? Loosely based on the Murdoch family, Succession follows the Roy family after the patriarch suffers a major medical emergency, calling into question—you guessed it—who among his children will control the company’s major assets. This show gets better and better with each episode, and while it’s easy to binge both seasons available so far, season three is a long way off, given production was delayed because of the pandemic. (The COVID crisis has also inspired fans to imagine how each Roy reacted to the lockdowns and where they quarantined. You just know that Roman held a secret party on that yacht, which turned into a superspreader event.)

You don’t need to go to law school to figure out that most of the plotlines in USA Network’s Suits are simply not possible in the real world. But this show is just so much fun to watch that it doesn’t matter. The dialogue is snappy, the pop culture references would be overwhelming if that weren’t the point, and yes, the suits (in terms of the wardrobe) are pure eye candy. If you’re looking for a show to binge-watch for a long period of time, Suits has nine seasons of material, and quite a few of the series cast members stick it out until the end. (I would have walked if Rick Hoffman left early. Louis Litt is this show.)

The premise of this series, from Sex and the City producer Darren Star, is that a woman reentering the working world at age 40 pretends to be much…younger to get her dream job (or at least a stepping-stone to a dream job). Now, to some, that may seem preposterous. To the rest of us, that actually sounds plausible. Since its release in 2015, the dramedy, starring Sutton Foster and Hilary Duff, has sustained positive reviews and a loyal following, and there is still time to catch up as the seventh season, scheduled to resume filming next year, is expected to be the show’s last.

Where to watch: Hulu