The Supreme Court will decide: Can Big Chocolate be blamed for child slavery? 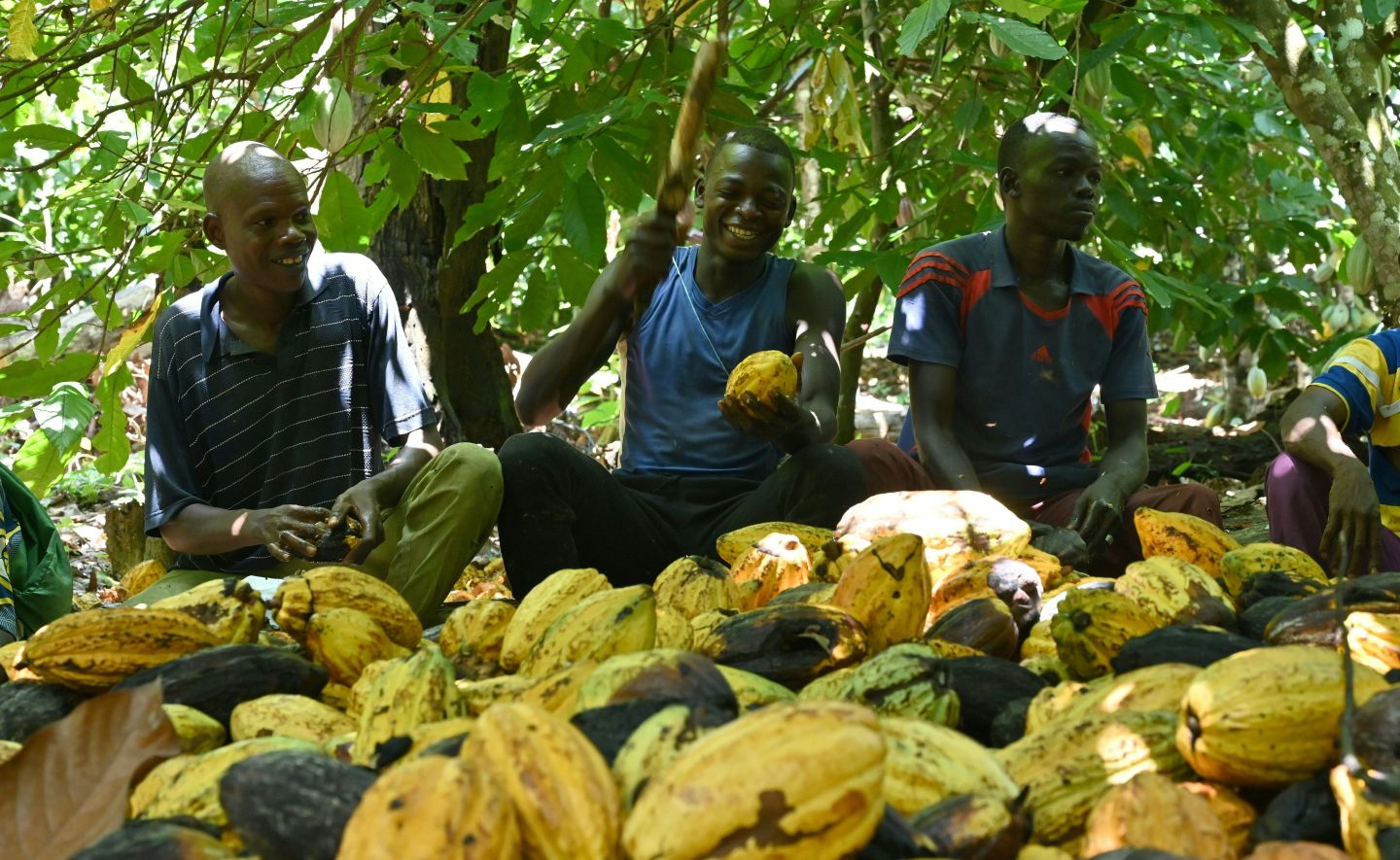 The rocky and tense transition of presidential power isn’t the only Washington drama with global implications these days. On Tuesday, another years-in-the-making conflict will play out at the Supreme Court, when the nine justices finally consider whether Nestlé and Cargill are responsible for the use of child slavery on cocoa farms in West Africa.

The case could potentially deliver a huge blow to the companies’ public images, in the face of mounting concerns over how chocolate is produced.

No one disputes how bad conditions are on those farms, and the Supreme Court briefs filed by the cocoa workers’ lawyers make for chilling reading—a tale about horrific abuse of children, for the benefit of global commerce. But the question before the Supreme Court is: Are chocolate companies to blame for that?

The case against Nestlé—the world’s biggest food producer—and Cargill, one of the biggest privately traded U.S. companies by revenue, has wound its way through the justice system for 15 years. It involves an 18th century law called the Alien Tort Claims Act—also referred to as the Alien Tort Statute—which allows foreigners to seek damages in U.S. courts for alleged violations of international law.

At stake for the companies is whether the original plaintiffs have a case against them at all, for allegedly aiding and abetting human rights abuses. If the Supreme Court decides that the Alien Tort Statute can be used to hold Nestlé and Cargill accountable, the six plaintiffs will be able to seek damages against them in lower courts. The companies are asking the Supreme Court to overturn a ruling in a San Francisco court allowing the plaintiffs to pursue their case.

The $100 billion chocolate industry has vowed for decades to eradicate child labor from its supply chain. Nestlé, Cargill, Mars, Hershey, and others all signed a 2001 U.S. agreement, promising to stop sourcing cocoa beans from farms in Ivory Coast and Mali that use child workers, within a decade; those two countries supply about 70% of the world’s cocoa. The companies failed to meet their deadline, and then blew through two others.

Instead, as production has soared over the past decade, so too has the number of children picking cocoa. Today, about 1.56 million children, some as young as five, toil on the cocoa farms, under arduous conditions, and for pennies, according to a report commissioned by the U.S. Department of Labor. As Fortune reported last month, NGOs and human-rights lawyers claim that rampant child labor is one factor in the chocolate industry’s outsized profits.

Attorneys for the original plaintiffs say their clients—six Malian boys who were then between the ages of 12 and 14— were trafficked to farms in the Ivory Coast, which supplies the key ingredient for chocolate made by, among others, Nestlé and Cargill.

There the boys were used as slaves, according to their brief. They picked cocoa for up to 14 hours a day, six days a week, in exchange for “scraps of food,” the brief says. When the farmers decided the boys were not working hard enough, they “were beaten with whips and tree branches.” At night, they slept on the ground under armed guard, ensuring they could not escape.

Those details collide sharply with the marketing presentations on Nestlé and Cargill’s websites, which highlight how they invest heavily in Ivory Coast and Mali, training farmers and building schools in the cocoa region. The chocolate-makers outline plans to ramp up and monitor all farms for child labor by 2025—something they originally promised to have accomplished a decade ago.

Nestlé and Cargill could risk sounding baldly callous in the Supreme Court next week. One of their main arguments, laid out in briefs they have filed through this year, is that while child labor is awful, they are not responsible.

Nestlé USA, the subsidiary of the parent company in Switzerland, says in its brief to the Supreme Court that it has “tremendous sympathy” for the children’s suffering, but that it does not own cocoa farms in West Africa—and in fact might not have sourced any of its beans from the farms where abuses occurred. Cocoa farmers often sell their beans to local middlemen, who then sell it on, several steps down the chain. It is all a long way from the company’s headquarters in the U.S., Nestlé says. “The only allegations about Nestlé USA are that it does business in the United States and therefore makes some corporate decisions here,” the company argues.

Nestlé and Cargill have gathered powerful support, with amici briefs, or legal arguments to the court, including from heavyweights like Chevron and Coca-Cola, which are not involved in the chocolate industry, but whose operations span the globe. They argue that if Nestlé and Cargill are eventually found guilty of having helped perpetrate child slavery, it could put a chill on other major U.S. companies investing in poor countries—perhaps leading to even worse conditions there. “It takes a proverbial—sometimes literal—village to address the scourge of human rights violations, and The Coca-Cola Company is proud to do its part,” the beverage giant tells the court.

In separate briefs, the U.S. Chamber of Commerce and the World Cocoa Foundation (which comprises about 80% of the global industry) argue that U.S. companies should not have to account for human-rights abuses across the world, in parts of the supply chain with which they have only a tenuous connection. If the Alien Tort Statute applied to those cases, they argue, it could lead to other countries launching retaliatory legal action against companies that do business in the U.S.

The lawyers representing the child cocoa pickers—now in their late 20s—say the companies are simply trying to dodge accountability. Nestlé and Cargill, they say, publicly portray themselves as being deeply engaged with African cocoa farmers, and yet in court, distance themselves from them.

“Virtually all of the business community is asking to be rescued from a law that applies only to the most extreme human-rights violations,” says Terry Collingsworth, executive director of International Rights Advocates in Washington, which brought the case against Nestlé and Cargill on behalf of the six boys. “That is a shocking development.”

With most of the business community ranged against the human-rights lawyers, Collingsworth believes the Supreme Court will likely rule in favor of the companies, and find that the Alien Tort Statute cannot be used to hold U.S. corporations to account for their actions across the world. The probability of that outcome, they say, only increased with the death in September of Justice Ruth Bader Ginsburg, who championed child-labor cases, and the addition to the court of Amy Coney Barrett, President Trump’s nominee to replace her. “We did the best we could, but we have a very conservative court,” Collingsworth says.

Even so, the lawyers believe that mounting concern over human-rights violations could steadily lead to legal changes—perhaps beginning outside the U.S.

On Sunday, Switzerland will hold a national referendum that, if passed, could force companies headquartered there to be held accountable for risks to people and the environment in their supply chain, even among its suppliers abroad, and allow foreigners to sue companies in Swiss courts.

If it passes, that law could have major implications for several companies whose supply chains have drawn criticism for potential human-rights violations. Nestlé and commodities giant Glencore are just two of many such companies headquartered in Switzerland—a country that for decades has prided itself on protecting business interests.

The Supreme Court decision could also impact how business is done far beyond the chocolate industry. Nestlé, for one, has faced similar scrutiny over child labor on coffee plantations in Brazil where it sources some of its beans. And global seafood companies have been accused for years of using forced labor in Southeast Asia. “We are doing this as a test,” Collingsworth says of the case against Nestlé and Cargill. “If it ends up being the case that allows these conditions to continue, it will be shame.”