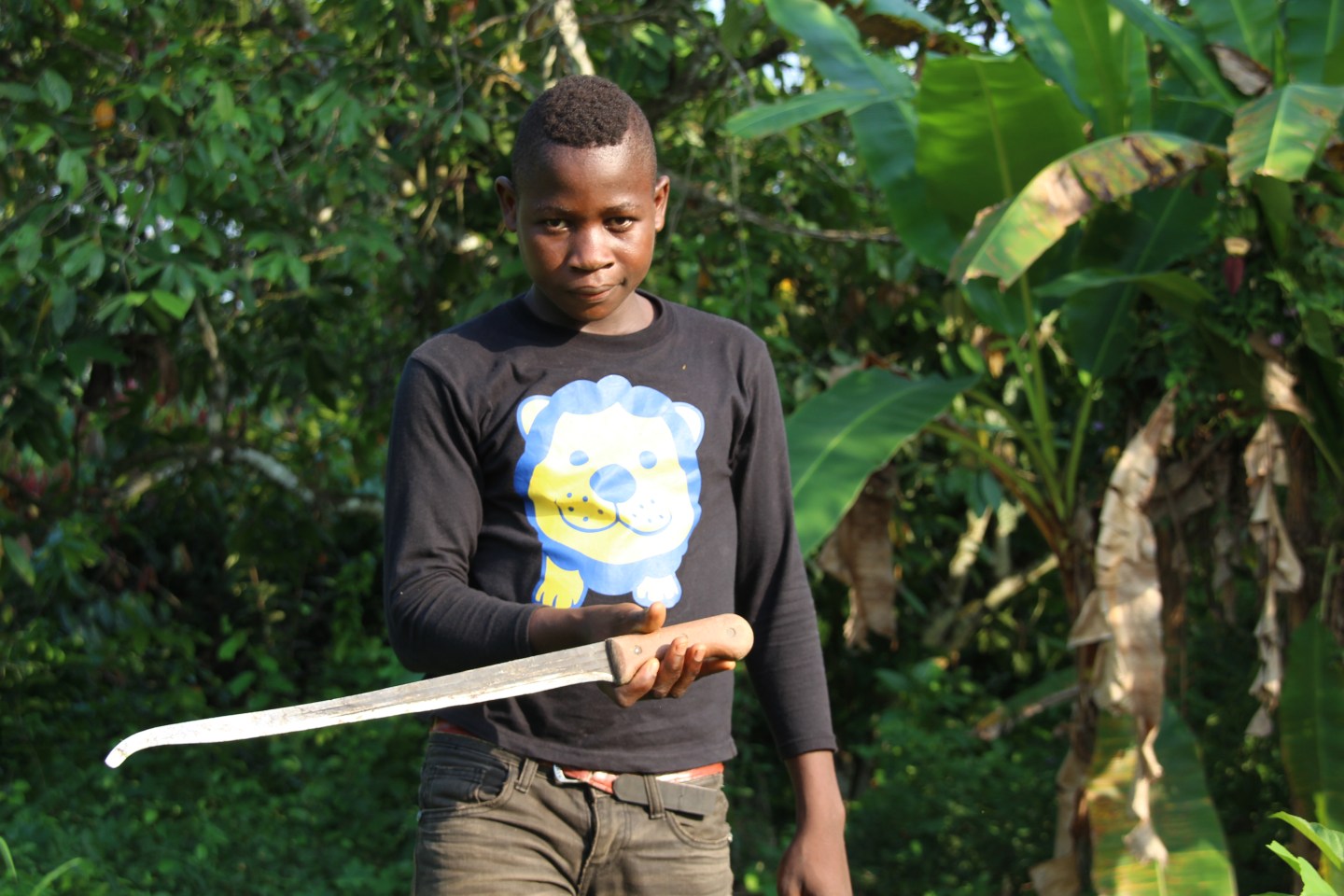 A former child plantation laborer in Ivory Coast shows the machete he used for the cocoa harvest. The use of child labor remains widespread on West African cocoa farms, according to a new report from the U.S. Department of Labor.
Jürgen Bätz—picture alliance/Getty Images

As Americans stock up on chocolates for Halloween this month, they might want to consider this grim statistic: About 1.56 million children—many as young as five—are engaged in the back-breaking work of harvesting cocoa for that chocolate in Ivory Coast and Ghana. Those two West African countries together supply about 70% of the world’s cocoa beans, the raw ingredient for the bars and treats made by the likes of Hershey, Mars, and Nestlé.

That estimate appears in a major report out on Monday, commissioned by the U.S. Department of Labor and written by the research institute NORC at the University of Chicago, at a cost of nearly $3.5 million. The 300-page document says the proportion of children in Ghana and Ivory Coast between the ages of five and 17 who work on cocoa farms has increased by a staggering 14 percentage points in the past decade, up from 31% to 45% of children living in the two countries.

While the report does not fully explain the increase, it suggests that some of it might be due to the fact that cocoa production has risen about 60% over the past decade, drawing in ever-growing numbers of children as farmers race to harvest their beans.

What’s more, about 95% of those kids face one or more significant safety hazards on cocoa farms, including using sharp machetes to hack away at pods the size of footballs, or working on land sprayed with pesticides. The use of pesticides on the farms has surged 20% in five years, according to NORC, which surveyed thousands of cocoa holdings during last year’s harvest season. “A large proportion of children in cocoa agriculture carry heavy loads, undertake land clearing, and are exposed to agrochemical products,” the report says. “The injuries reported by children seem to be reflecting the consequences of these hazards related to cocoa agriculture.”

The report makes for troubling reading. Yet just as worrying—and infuriating to child-labor campaigners—is that companies and cocoa traders have failed to resolve an issue that they committed to tackling nearly 20 years ago. Under a 2001 protocol approved by Congress, eight of the industry’s biggest players agreed to eradicate 70% of the worst forms of child labor by 2020—a deadline it has missed. It also missed interim targets in 2005, 2010 and 2015.

On Monday, the World Cocoa Foundation, whose 100 member companies comprise about 80% of the industry, said it aimed to have its anti-child-labor programs reach all cocoa farmers by 2025, and that it would invest about $1.2 billion in paying farmers above the market rate for their beans. “As this report shows, there are today still too many children in cocoa farming doing work for which they are too young, or work that endangers them,” foundation president Richard Scobey said in a statement as the report was released. “Child labor has no place in the cocoa supply chain,” he said.

Yet in the minds of many, the chocolate companies’ efforts have come very late, and with reluctance.

“The industry and others want to do the minimum amount they can get away with, because it is a pain in the neck to them,” says Rep. Eliot Engel, a Democrat from New York who cosponsored the 2000 deal, known as the Harkin-Engel Protocol. Now chair of the House Foreign Affairs Committee, he said in a briefing last week with the International Labor Organization, the U.S. Department of Labor, and Unicef, that much more needs to be done. “We need industry to work with us, and not fight us on it,” he said.

Campaigners working on abuses in cocoa farming put it even more bluntly than that.

They describe a $100 billion industry whose lucrative sales are a jarring contrast with the extreme poverty of African cocoa farmers. By some estimates, many farmers earn about $1 a day—not enough to enjoy a bar of chocolate. “It is so scandalous to me,” says Etelle Higonnet, senior campaign director of Mighty Earth, an environmental organization in Washington, D.C., after studying the new report. Mighty Earth has spent years pushing for better cocoa-farming practices. “If these kids were white, you can bet we would not allow this to happen,” Higonnet says.

Monday’s report is not entirely bad news, and it includes signs of progress. For example, the estimate of 1.56 million child cocoa workers is lower than the previous figure of about 2 million, the estimate in a report five years ago, which is now thought to have been a miscalculation.

Faced with rising consumer concern over child labor, chocolate giants like Cargill, based in Wayzata, Minn., and the Switzerland-based Nestlé have begun ramping up programs to build schools, monitor cocoa farms, and implement awareness programs among farmers. “Over the past five years there has been an increasing call for due diligence, and companies have begun to identify risks and do something about it,” says Nick Weatherill, executive director of the International Cocoa Initiative in Geneva, an independent organization funded in part by the chocolate industry. “They are starting to scale up now.” He calls the NORC report “a mixed bag of sobering reminders, lower estimates and some signs of progress.”

A draft of the NORC report was shared with chocolate companies and cocoa traders several weeks ago, and includes a response from the industry, featured in a small box on the pages of the report, saying that it has financed new schools across the cocoa region, collected data on child labor, and expanded training programs.

Those programs are also splashed across the companies’ websites, as they increasingly work to stave off bad P.R. around child cocoa workers—a disturbing contrast to the feel-good products the companies sell.

Cargill, for example, says on its website that “it is our duty to make sure that children who work on farms outside school hours are not financially exploited, physically endangered or discouraged from studying or playing;” it illustrates its statement about child labor with a photo of kids playing with a soccer ball. On Nestlé’s website, next to a photo of an African child writing in class, the company states that “access to quality education is an essential tool to promote children’s rights and fighting child labor,” and says the company has joined an industry effort to invest in 10,000 primary schools in the cocoa region by 2030. Both Nestlé and Cargill are prominent members of the World Cocoa Foundation.

Yet the industry’s critics point to one major problem: Under the Harkin-Engel Protocol crafted in 2000, it agreed to regulate itself. That has shielded companies from any legal action relating to child labor.

“There is no mechanism that has consequences,” says Terry Collingsworth, executive director of International Rights Advocates in Washington, which has sued Cargill and Nestlé on behalf of a group of children who claim they were trafficked to cocoa farms to work there. That case goes to the U.S. Supreme Court in December. Since chocolate companies have now promised to eradicate child labor by 2025, “what they are saying is, ‘we can use child labor while we are trying to stop it,’” Collingsworth says. “It is so cynical.”

Despite the claims by Big Chocolate that they have invested heavily in child-labor programs, in several interviews over the past week, campaigners say they fear those programs have made little impact.

The NORC report estimates the programs reach only 20% of farmers, but NGOs believe even that estimate is too high. “We say to farmers, ‘You are producing for Cargill, so what is the impact of their program?’” says Charity Ryerson, legal director for the Corporate Accountability Lab in Chicago, who visited cocoa farms late last year. “They say, ‘We do not know we are producing for Cargill, and we have never seen the program.’”

Indeed, the fragmented structure of the cocoa industry, as well as the remote, rural poverty in which the farmers operate, all make tackling child labor intensely difficult. Unlike in coffee or cobalt—two industries that have used children for decades—there are no sizable cocoa producers.

Instead, the vast majority of cocoa farms are tiny family enterprises of just a few acres. The farmers sell their beans to local cooperatives, or often to traders who pass by on motorbikes, buy their product and then resell them up the chain. Reaching tens of thousands of those farmers is not easy. “It goes all the way to the root causes: The poverty of farmers and the lack of alternatives,” Weatherill says. “There is a lot that companies can do to solve this, but they are not solely responsible.”

Still, two decades after the child cocoa workers became a global issue—and more than 20 years after Big Chocolate promised to rid their supply chain of child labor—the issue still seems far from being solved. And child-labor NGOs caution that COVID-19 has likely sent child labor soaring again—in all industries—as schools have closed and poverty has deepened.

Fair Trade certification has proliferated in recent years, giving some consumers the impression that companies are now producing chocolate in an ethical way. In reality, organizations say, the Fair Trade label refers to the premium price paid to farmers or cooperatives—little of which makes a dent in farmers’ dire poverty. “Consumers think, ‘This is an empowered farmer,” Ryerson says. “It is completely off from reality.”

CORRECTION: An earlier version of this story incorrectly said that the chocolate industry planned to eradicate child labor by 2025.