To take control of your career, ask for what you want—directly and explicitly 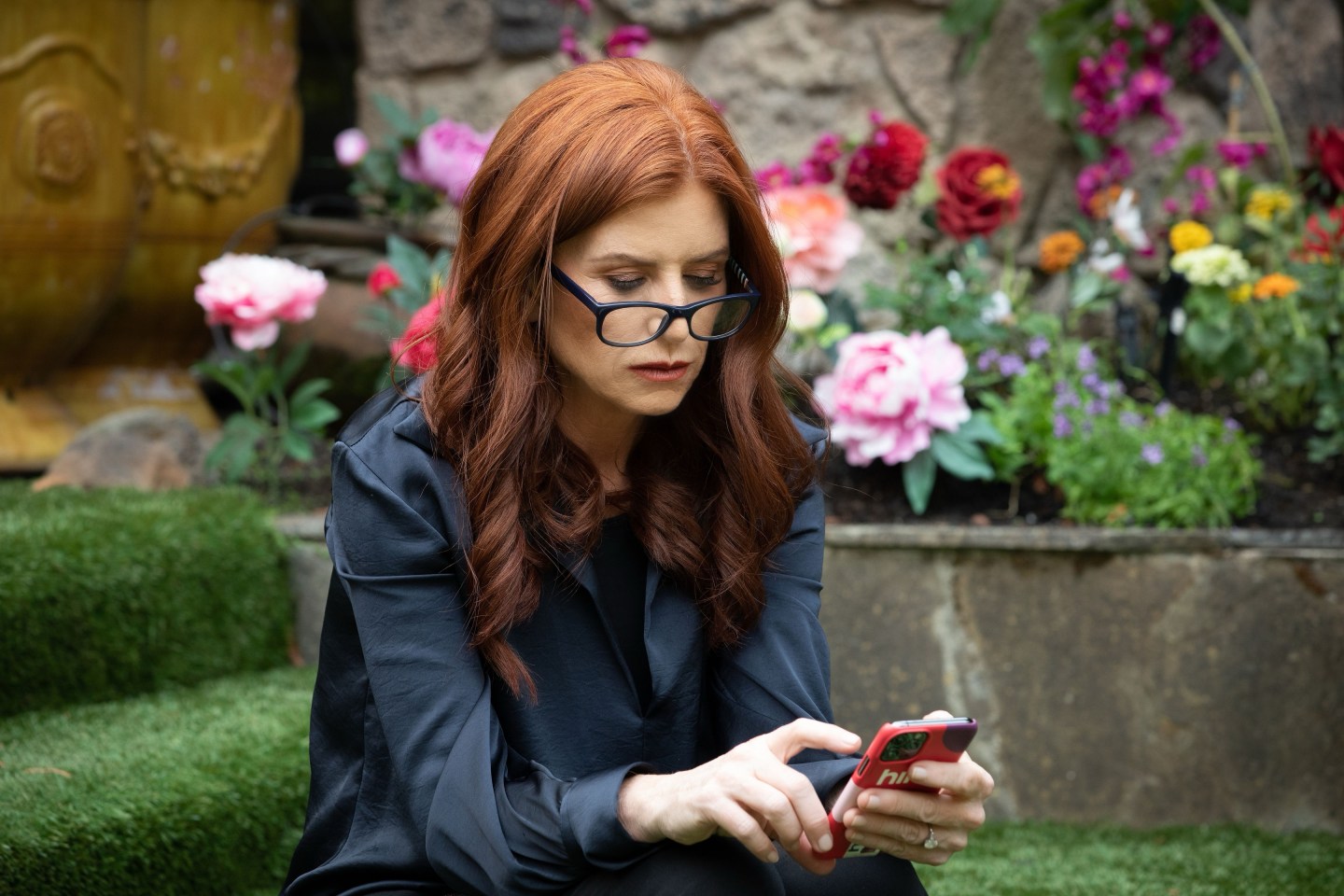 Kara Goldin is the founder and CEO of Hint Inc., whose flavored, unsweetened Hint Water has seen its sales soar during the current pandemic. But becoming a beverage entrepreneur was perhaps the furthest thing from her mind in the late 1980s, when she set out to establish herself in media—an effort that led her, almost literally, to Fortune‘s doorstep. In this excerpt from her new memoir, Undaunted, Goldin talks about how being unafraid to show up uninvited helped her launch a stellar career.

The economy was not in good shape my senior year, and many of my classmates just wanted to get a foot in the door somewhere, anywhere. Many were settling for unpaid internships.

I didn’t want to do that, but I also didn’t know enough about the job market to chart my own path. So I did what I would do over and over again in my life to make an informed decision: I asked questions. Of anybody and everybody.

If the opportunities I want are not coming to me, I thought, I’ll have to create them for myself.

Photograph by Platon for HarperCollins Leadership.

Instead of meeting with the on-campus interviewers, I went out in search of interviews of my own. After several weeks of asking anyone and everyone for contacts in my job search, I put together a list of all the leads I got and started sending out letters and making phone calls. I pitched myself hard. I said I was excited about the company, whatever it was, that I was a hard worker, that I’d consider any kind of job, and that I’d gladly fly at my own expense for an in-person interview.

Before I knew it, I had seventy potential interviews lined up. They were all entry-level positions in all kinds of companies, from consultancies to financial service providers.

But there was one place I wanted to work at above all the rest. It was a publishing company, based in New York, whose product I really admired.

Unlike most of the other companies I sent letters to, I didn’t have a contact name at Fortune, but I didn’t let that stop me.

I figured it couldn’t hurt to ask.

In fact, I’ve found that the most certain way to get what you want is to ask, directly and explicitly.

In all the letters I sent to prospective employers as a job-seeking college grad, I asked for an interview and a job, but I added a more personal touch to my Fortune letter. I wrote directly to Marshall Loeb, the managing editor of the magazine and a major figure on the New York and national publishing scene. I knew he was the person responsible for making Fortune the magazine I liked so much.

When he came on board as editor just a few years earlier, the magazine had been pretty stodgy, focused on finance and economics. Loeb livened it up with stories about business people and their companies and introduced more photos and graphics. Those were the stories that had turned me on to business and the people who drove it.

In my letter to Mr. Loeb, I explained how much I liked the magazine and said that he had taught me more about business than my finance professors had. Even though I secretly imagined myself as a reporter or an editor, with my feature stories and byline on the Fortune cover, I made it clear that I would love to work for him in any position he had available.

I got a nice letter back., thanking me for writing and proposing that if I was ever in New York, I should get in touch and they would see about arranging an interview. Signed, Marshall Loeb.

That added New York City to my list of places to visit.

I hadn’t actually arranged for an interview, as Mr. Loeb had suggested. I thought about calling ahead, but decided to just show up instead. My plan was to walk into the human resources office, show them the letter from Marshall Loeb, and ask for a job. That’s how I had gotten jobs in high school. I had learned it’s tough to ignore somebody who’s standing right in front of you. So that was my plan: show up, do whatever it took to land an interview, get a job.

Pushing through the door

It was a cold January day in New York, 1989. I walked along Sixth Avenue to the famous Time & Life Building. I pushed through the revolving door into an almost overwhelmingly awesome lobby of glass, marble, and stainless steel, hung with enormous works of art.

For the first time, I got a sense of the magnificence and prestige of the company. Fortune was part of the Time Inc. empire, which published more than a hundred magazines, including Life, Time, Money, Sports Illustrated, and People. In those days, it was the print media, not the Internet, that shaped how people got their information and how they viewed the world.

I hesitated. Could I really go through with this? Suddenly, it felt like an impossible long shot. I took a deep breath. I got in the elevator, rode up several floors, found the human resources department, and went up to the receptionist.

She looked at me skeptically.

“Do you have an appointment?”

“No. I have a letter from Marshall Loeb.”

I showed her the letter. She studied it briefly then looked at me as if uncertain what to do next. A woman standing nearby had heard our exchange. She came over and introduced herself as the head of human resources. She glanced at the letter. Obviously she had seen hundreds like it. The standard college student brush-off form letter. I had imagined Marshall Loeb read it and personally signed it. Now I realized he had probably never even seen it.

The head of HR looked at me with a mix of amusement and curiosity.

“What Mr. Loeb meant was that you should get in touch and make an appointment for an interview if you were planning to be in New York.”

Although she was saying “No,” what I heard was “Maybe.”

She again tried saying no. “I’m sorry, but there really aren’t any openings at Fortune right now.”

I didn’t turn to go. I just stood there. Right in front of her. Hard to ignore. There was a pause. Then she remembered something.

“You know, I think there is a job available at Time. It’s in the circulation department. Would you be interested in that?”

Now she was saying “maybe,” but I was hearing “yes.” I had only a vague idea of what circulation was. It wasn’t Fortune. It wasn’t Marshall Loeb. And it probably wouldn’t involve reporting that resulted in cover stories. But if I could work in the building, I could meet the Fortune people and eventually get hired as a writer.

I am forever grateful to that kind woman. “Okay. Let me see if Brooke is available to see you now.”

She disappeared for a minute, then came back and escorted me to an office on a different floor. There she introduced me to Brooke McMurray, who was head of third-party circulation and was looking for an executive assistant. I sat down and told Brooke my whole story—about how much I liked reading Fortune, my communications studies at ASU, my letter to Marshall Loeb, my seventy interviews, and my multiple job offers.

Brooke listened patiently. I can only imagine how I came across. I was twenty-one. My main work experience had been as a waitress at the Tee Pee restaurant in Tempe, Arizona. I had never lived in New York, had never even been to New York before this trip. Everything I knew about the publishing industry I had learned in class, and I knew absolutely nothing about circulation.

It must have been an okay story because Brooke didn’t kick me out. She described the kind of assistant she was looking for. I had to be committed to supporting her. I had to be the kind of person who could help her get things done.

“Do you think you are that kind of person?”

I thought for a moment. Executive assistant wasn’t exactly what I had in mind, but I would learn a lot about publishing, the corporate world, and about living in New York. I was in the right building, in the right city, with a person who looked like she could be the right boss. I could learn.

“Yes. Absolutely. I am that kind of person.”

I flew back to Arizona. When I got home, I had a voicemail waiting. Time wanted to hire me as Brooke’s assistant. I had landed a job.

While I never wrote a story for Fortune (back then, at least), I got to work with people who were thinking creatively about how to build their business during a time of change. I discovered that I loved selling and business development. I learned that hard work and a commitment to solving problems are still the most important values in business. Sometimes, though, you need to take control of your own career, and you find that you need to move on to move up.

Kara Goldin is the founder and CEO of Hint Inc. and the author of Undaunted: Overcoming Doubts & Doubters. She also hosts the podcast The Kara Goldin Show, where she interviews founders, entrepreneurs, and other disrupters across various industries.