The parallels between 1948’s ‘Dewey defeats Truman’ election and today 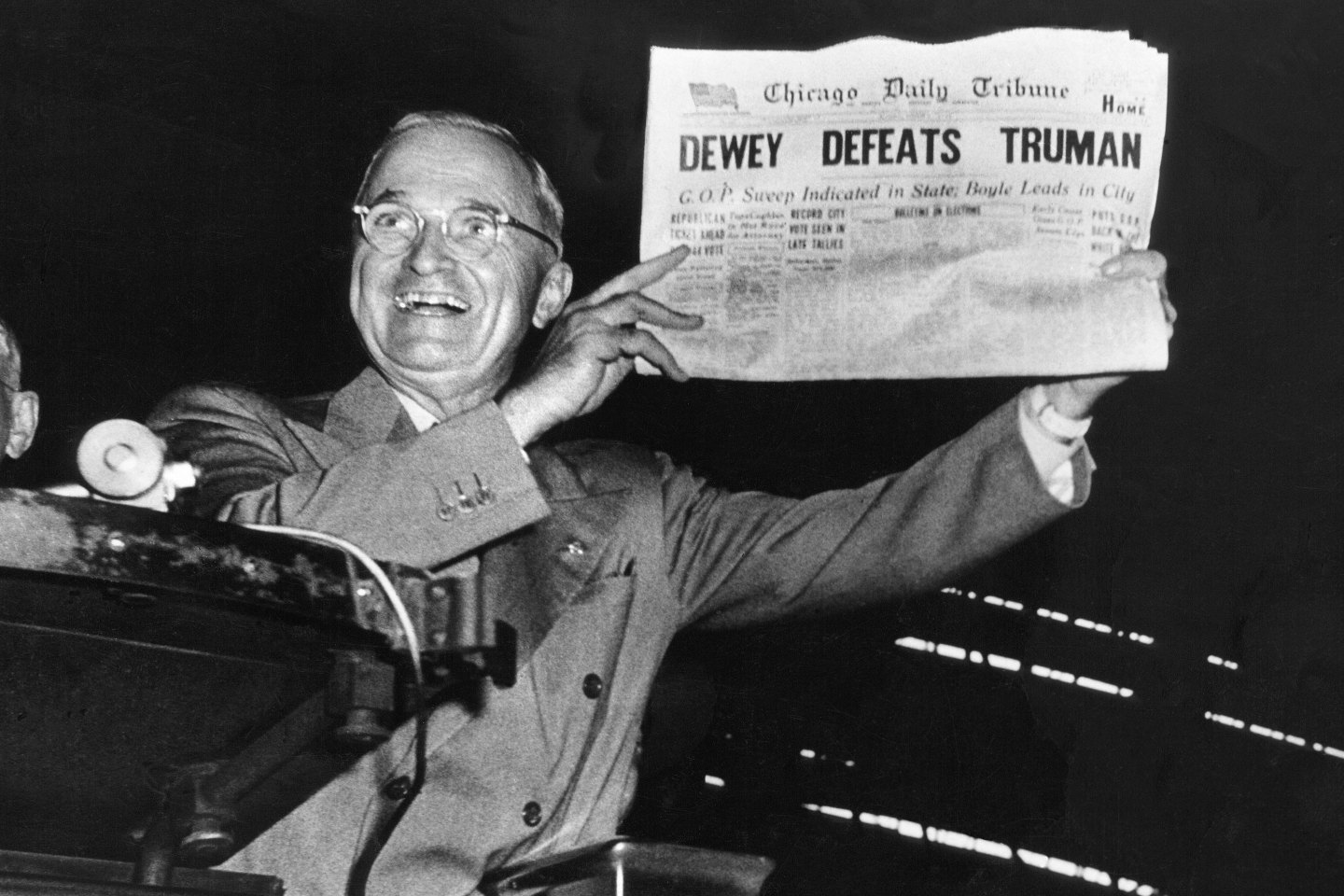 The famous “Dewey defeats Truman” presidential election was 72 years ago and reminders of what was an epic polling failure echo to this day. For pollsters, pundits, and the press, Democrat Harry Truman’s surprise victory over Republican Thomas E. Dewey in 1948 is, or ought to be, an enduring reminder about the perils of extreme overconfidence.

The 1948 election also may offer a lens by which to understand the outcome of the Trump-Biden race. Here’s how:

If Joe Biden blows what has been a solid lead in pre-election polls, his loss may be attributable to having pursued something akin to Dewey’s glide-path campaign that avoided controversy while trying to nurse a clear lead in the polls.

But if this year’s pre-election polling is accurate and Trump is repudiated, his defeat may be attributed to a failure to adapt Truman’s blueprint for winning in spectacular, against-the-odds fashion.

This is not to say election history will repeat itself. It almost never does. The parallels between 1948 and 2020 are not exact, but they are redolent enough to be intriguing and worth examining.

Dewey, who was New York governor in 1948, seemed bound for an easy victory. Truman’s Democratic Party had splintered into three factions and pre-election polls signaled Dewey was comfortably ahead. He seemed so far ahead in early September 1948 that Elmo Roper, one of the three national pollsters at the time, announced that he would release no further survey results unless a political miracle intervened.

Dewey was determined to avoid risk-taking. He spoke soothingly while trading in platitudes. “America’s future … is still ahead of us,” he said on one occasion.

According to his biographer, Richard Norton Smith, Dewey said to a supporter who suggested he inject specifics into speeches: “… always remember, when you’re leading, don’t talk.” He sought to strike a dignified aura but came across as distant and lackluster, not unlike Biden in 2020.

Dewey did not seclude himself as Biden has often done. He campaigned confidently, if rather leisurely, abroad a private train called the “Dewey Victory Special.” Laundry service and other amenities were offered to the dozens of reporters who traveled aboard. Few “inconveniences trouble the life of anyone on the governor’s train,” journalist Richard Rovere wrote in a campaign dispatch for the New Yorker.

His smooth, above-the-fray approach probably cost Dewey the presidency. If a similar fate awaits Biden, his low-visibility, socially distanced bunker strategy may well be regarded as a decisive factor.

Might Biden really be the Dewey of 2020? Nearly all the national polls say no. But as the 1948 election memorably affirmed, polls are not always prophetic. And Biden’s aggregate polling lead in battleground states is slimmer than his advantage nationally. A Biden loss surely will conjure Dewey’s ghost.

Trump’s campaign, meanwhile, has at times resembled Truman’s aggressive tactics of 1948. According to his biographer, David McCullough, Truman “had just one strategy—attack, attack, attack, carry the fight to the enemy’s camp.”

Even after a bout with COVID-19, Trump has stumped with energy and stamina, much as Truman did. The President’s campaign rallies and roadshows have attracted large, enthusiastic crowds, as Truman’s did in his grueling, cross-country campaign swings by train. Trump has been harsh and persistent in his attacks on his foe, as Truman often was. (Unlike Trump, who routinely questions Biden’s mental acuity and disparages him as “Sleepy Joe,” Truman rarely mentioned Dewey by name. He did, however, liken Republicans to fascists late in the campaign.)

Trump on the campaign trail has scarcely encouraged an impression of discipline and order. Unlike Truman, he has had difficulty remaining on message, and invariably has indulged in meandering narcissism. He has drifted from attacks on Biden to gloating about his surprise election four years ago. Such self-congratulatory detours have been distracting and have blurred his case against an opponent who is vulnerable and mostly sequestered.

A campaign focus à la Truman is what Trump has needed to overcome a persistent polling deficit. But Trump this year has been no Harry Truman. Should he lose, indiscipline will loom among the reasons why.

W. Joseph Campbell is a former journalist and a professor of communication at American University in Washington. He is the author of seven books including, most recently, Lost in a Gallup: Polling Failure in Presidential Elections. Follow him on Twitter.