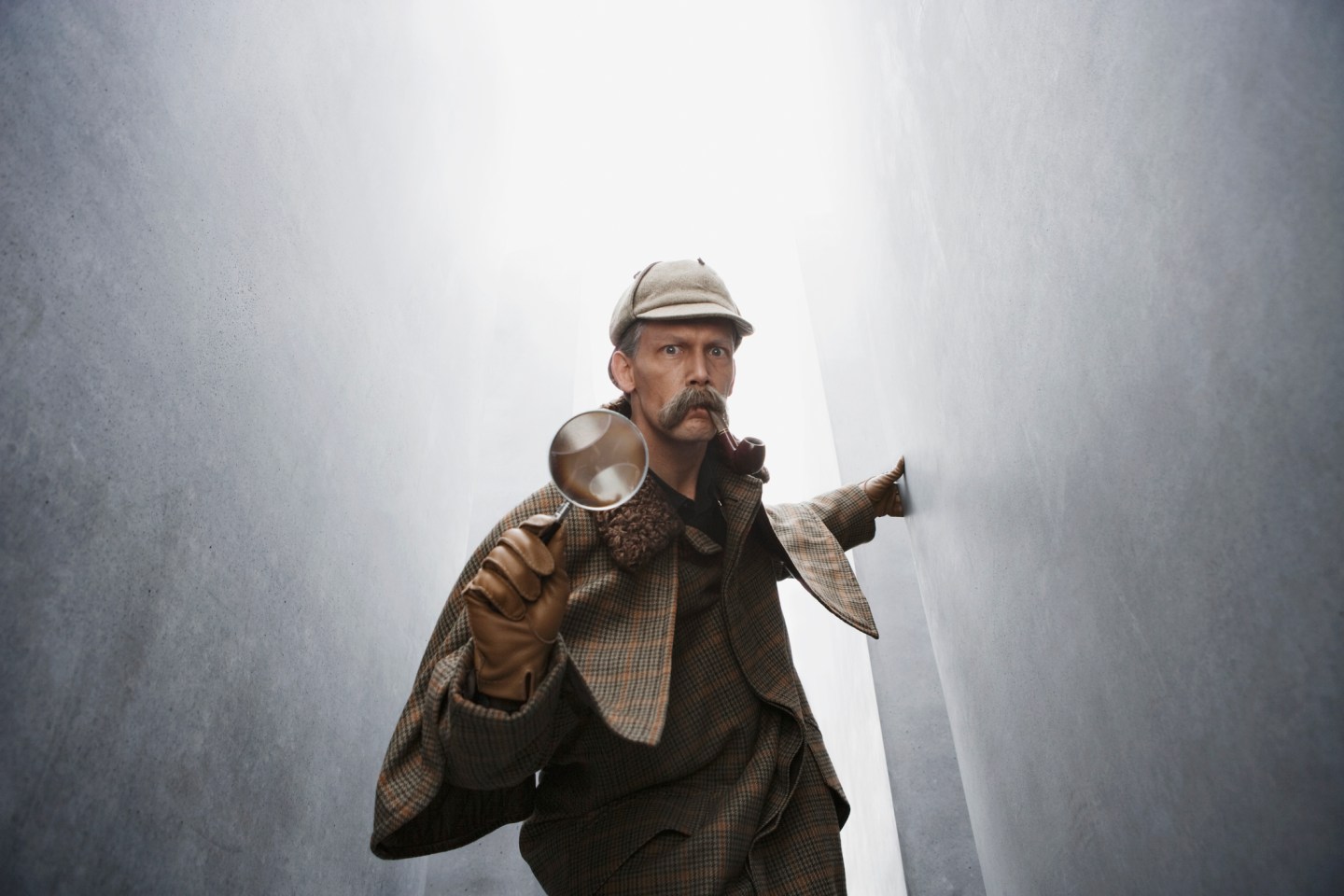 In the late 1990s, Tyler Maroney worked as a reporter for Fortune. But a chance encounter with an employee of Kroll, the large corporate detective agency, set him off on a new career as a private investigator. After working for Kroll and later another investigations firm, The Mintz Group, he went on to found his own detective agency, Quest Research and Investigations (QRI), based in New York.

Now, Maroney has written The Modern Detective (Riverhead Books, an imprint of Penguin Random House), in which he reflects on his career as a PI, detailing his pursuit of corporate fraudsters, missions to conduct due diligence for blockbuster mergers and acquisitions, and even how he helped free an innocent man from prison.

Maroney seeks to demystify the job of private investigators and debunk myths ingrained from television and pulp fiction. He argues that the modern detective is a vital cog in corporate life and can be a force for good in society.

Fortune spoke to Maroney via Zoom to ask him about his new book and his career. (The questions and his answers have been edited for length and clarity.)

One of the arguments you make in the book is that private detectives have become  indispensable to the functioning of large corporations and to corporate America. Why do you think that’s true?

Private detectives are brought into projects throughout the entire life cycle of a company’s existence. Before a company is even formed, often investors will hire private detectives to conduct due diligence on the executives who are going to run that company, so that they understand who they’re going into business with. Then, down the line, when companies are up and running, they may get involved in legal disputes—whether it’s alleged vendor fraud, or a lawsuit with a competitor over a contract or trade secrets, for instance—and private detectives are brought in with outside counsel in that case, to help collect facts to resolve those disputes. Later on, when companies identify issues internally, such as a situation where they may have an employee they suspect is involved in, say, expense account fraud—so private detectives are brought in to investigate that. If it turns out that there is some material, criminal behavior going on, then there’s a referral made to law enforcement, often in conjunction with outside counsel. So my point is, whether it’s a kind of plain-vanilla due diligence or a bet-the-company controversial dispute, there’s a role for private detectives to play that is not “espionage” but simply gathering facts to help the business become more profitable and run effectively.

You say you wrote the book as a kind of corrective to the popular view of the private investigator as, at best, amoral, or, at worst, a sort of immoral force in the world. But so often we hear about private investigators who have run amok, or have been used to silence the critics of some powerful person or corporation. In light of that, how can you justify your view that that’s not really what private investigation is all about?

I acknowledge that there are people in my field who engage in that kind of behavior. There are countless stories in the media, yes. But the word corrective is a good one, because I very much set out to write a book that laid out 10 narratives, 10 chapters that describe the work of private investigators that is moral, effective, and useful on behalf of a whole range of clients. I try to make the argument that the worst among us are not representative of who we are, even if they get the most attention in the media. One of the points I try to make in the book is that in the United States, the industry is regulated. So each state has its own licensing regime. And there are very explicit rules against tactics like pretexting, which is essentially using deception, to get someone to speak to you.

In your experience, how do most corporations manage their relationship with private investigators? What kind of oversight do they exercise?

It depends on the company and the assignment. We are hired by outside counsel, the general counsel’s office, the head of security, audit committees, and so forth, depending on the assignment. I’m glad you asked about oversight, because I often feel that our clients who hire private investigators could do a better job of investigating their own investigators, so to speak. By which I mean, knowing who you are hiring and why you are hiring them. And not only that, but asking what they plan to do: Who do they plan to interview? What documents do they plan to collect and how will they digest that information and present it? It’s not uncommon for private detectives to tell their clients that they are going to disappear for a few weeks and come back with a report describing what they’ve done. I feel that that’s a mistake. I think there should be more transparency that’s built into the relationship between companies and private detectives, because if that happens, there’s no danger of clients being caught off guard by a detective who’s done something immoral or even illegal.

But isn’t it the case that many times these companies don’t want to actually know what it is the private detective is up to? Don’t they use private investigators in part to have plausible deniability about whatever tactics that the investigator might use?

Yeah, I don’t deny that at all. In fact, going through outside counsel is a very standard way of engaging private detectives. I often recommend it, because we then become agents of the outside counsel, and our communications and information become legally privileged. If it’s in anticipation of litigation, for instance, or in the course of litigation, then that can be important. Sometimes there are even more elaborate work-arounds. I mean, private detectives are sometimes hired by a family member of an executive at a corporation, for instance, or by, you know, some other LLC, that is not traceable back to the company. I completely concede that that happens. Having said that, our firm works hard, and many of the men and women I’ve worked with over the years do everything they can to avoid those dynamics.

How has technology changed your job? You have this great chapter in the book where you talk about working with a digital forensics expert to find information hidden on the work computer of an employee suspected of illicit activity. How much of the work of a private investigator these days is Columbo versus sort of Mr. Robot?

I try to combine Columbo and Mr. Robot every day. And it’s not an easy melding. There’s so much technological innovation these days, whether it’s on the dark web, or cryptocurrencies, for example, or the explosion of social media and disinformation campaigns. If we are not keeping up with technological innovation, we cannot serve our clients properly. For example, we are often hired by companies who have been victimized by what appear to be short-sellers and tweets online that are posted anonymously that essentially seem to be bad-mouthing a company. And the assignment is to unmask who’s behind that Twitter account and see if it can be connected to, say, a short-seller. And to be able to understand where information lives online, where information that is deleted may still live online, and to follow digital footprints is an incredibly valuable skill.

How has the coronavirus pandemic affected your work?

In the United States, private investigators have actually adapted pretty well. The reason is that so much information lives online. And not just social media, but I’m referring to the kinds of documentation that we seek out every day, whether it be a court record or a property deed or a filing with the [U.S. Patent and Trademark Office] or a news report or regulatory filings. So the ability to access information online has not changed. We often do what we call “doorstepping” in the industry— showing up at someone’s house [unannounced]. But we found that, kind of ironically, since everyone is at home these days, they actually welcome the opportunity to talk to people, and we have found that they will pick up the phone and or agree to use technology like Zoom and WhatsApp or some other video platforms. People are kind of getting bored from being home, and I find that people are actually willing to talk to us just as much as they ever have.

What is the line between due diligence and corporate espionage?

I would push back a little bit on the use of the term corporate espionage as opposed to competitive intelligence. Espionage often means using some kind of deception or stealing information, whereas competitive intelligence is often gathering information about a competitor. That job is less about hacking into your competitor’s email system than it is about tracking down and interviewing a few dozen former employees of the company, or former vendors of the company, or legal adversaries of the company, or obtaining documentation about the financing of the company that might be publicly available but hard to find. I would even say this is a necessary component of business dealings, because as we all know, many companies don’t want to do very much to disclose their own vulnerabilities. Oftentimes, private detectives are brought in to figure out if a company is being forthcoming and honest in its public filings.

This story has been updated to clarify that Maroney worked for The Mintz Group prior to founding QRI and to correct the length of time he has spent as an investigator. It is just over 15 years, not two decades.