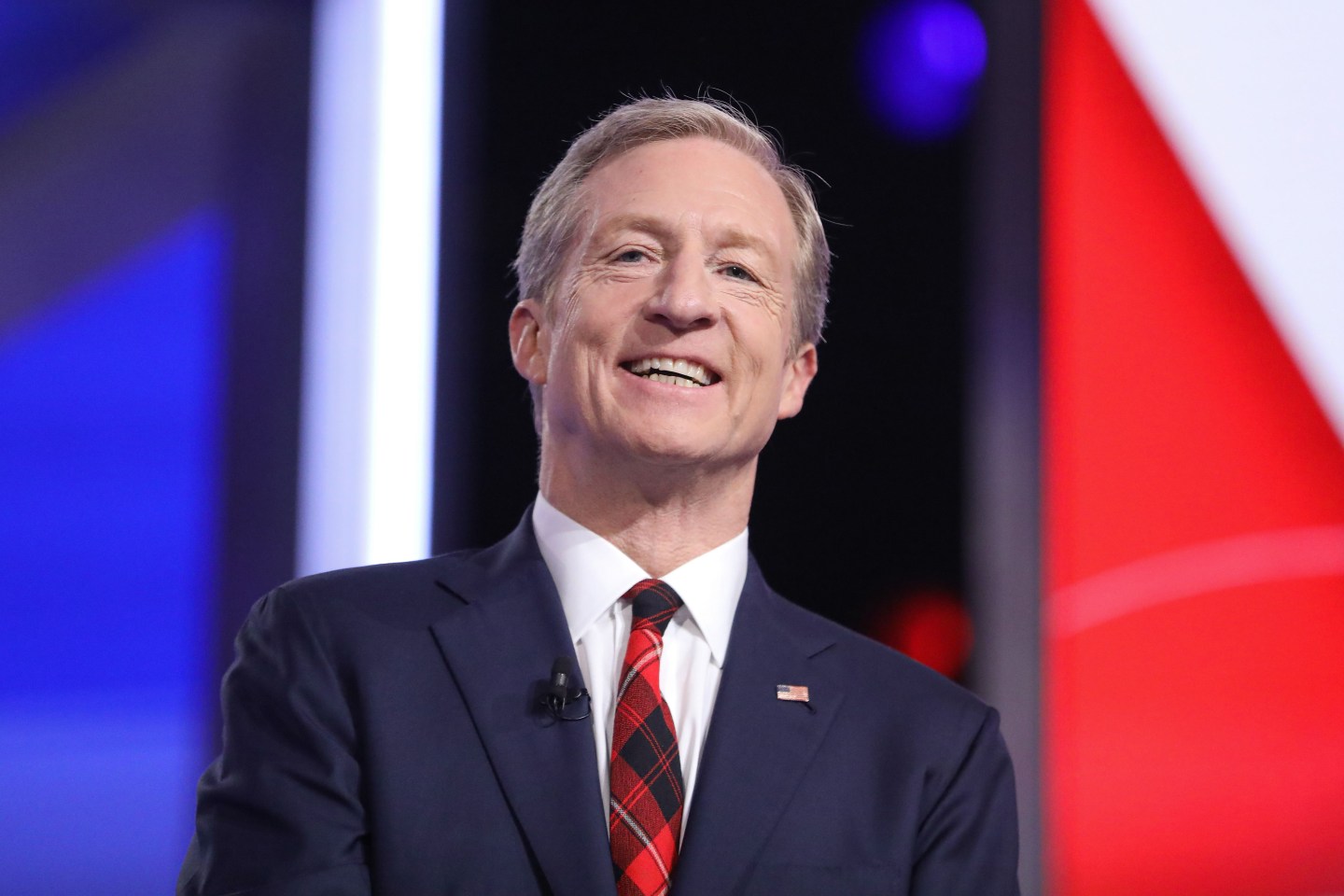 Since Tom Steyer dropped out of the presidential race in February, he has been busy proselytizing about his favorite topic: climate. Both the political and the earthly, that is.

An advisor to Democratic candidate and former Vice President Joe Biden, Steyer is warning that the planet faces imminent calamity if bold and urgent action isn’t taken. But it’s not all doom and gloom, says Steyer, a billionaire and former hedge fund manager. Humanity may yet snatch prosperity from the jaws of eco-devastation.

Fortune caught up with Steyer, whose name has been floated for a possible Biden cabinet placement. He explained the Democratic ticket’s economic recovery plans, which tie together financial stimulus and environmental policy. The discussion ranged from how Steyer is reading the markets to what technological breakthroughs he’s most excited about (see: electric vehicles, offshore windfarms, and more).

Here is that conversation, edited and condensed for clarity.

Fortune: Which is the bigger crisis facing this country, COVID or climate?

Tom Steyer: I don’t separate those. It is our ability to handle the natural world. It’s about dealing with the facts, dealing with the science, and taking into account what you need to do to avoid disaster. Joe Biden intends to deal with them in a way that also addresses our high unemployment rates and the need to create good paying middle-class jobs. Mr. Trump has done nothing but whiff.

What would a Biden presidency entail?

The biggest thing the Biden campaign has proposed is the $2 trillion “build back better” plan to rebuild the infrastructure of America over four years with an eye toward climate and clean energy—but it’s not limited to that. It includes building affordable housing and charging stations for electric vehicles. It includes weatherizing millions of houses, redoing HVACs in commercial buildings, and rebuilding the grid so it can take in renewables. It’s a huge infrastructure deal. This is critical.

The president says the plan costs too much and will destroy the economy.

The exact opposite is true. Did you read Mr. Trump’s taxes? Are you going to listen to this guy on business or economics? I did two studies five or six years ago with Hank Paulson and Mike Bloomberg with the support of American CEOs and policy leaders called “risky business” to show that moving to clean energy creates faster growth, more and better paying jobs, and better health, while avoiding the climate disaster. It is a win, win, win. Clean energy is cheaper than fossil fuel energy. Trump either doesn’t know what he’s talking about, or he’s lying. Those are the only possibilities.

What is the cost to the country—or the planet—of delaying action?

Incalculable. Your generation is going to have to deal with this every single day for the rest of your lives.

I live in California. We’ve had over 4 million acres burned so far this year. The record before this was two years ago, 1.9 million acres. The Gulf has a record number of hurricanes. If you have a strong stomach, read about how the now-considered-unstoppable melting of the Greenland and Antarctic glaciers will affect sea level. This is not a problem you can wait four years to deal with. No, this problem will just keep escalating until we get on top of it.

China is making bold commitments. It aims to be “carbon neutral” by 2060. Do you believe, or trust, China’s leadership when it makes such pronouncements? Is there any hope of the U.S. and China working together?

Where should the U.S. focus its attention?

All I can say is the market is speaking really loudly here—really, really loudly in terms of where we’re going. The Republican Party isn’t listening. Just take a look at where people think the future is—whether that’s the balance sheets of our biggest banks, or the valuations of companies on freely traded exchanges. We say we want America to be energy independent. Let’s talk about how we’re going to do that.

Which technologies excite you most right now?

As a former hedge fund manager, what advice might you have for people looking to get through this time of economic uncertainty?

I don’t really give investment advice anymore. I always say to people, if you want to do it, do it full time—be completely committed. But I will say this. It has never worked to invest in the past. We literally need to rebuild this country. Drive around and take a look. We need to rebuild the infrastructure and we have to do it on accelerated basis. This is a huge business opportunity.