A Q&A with the provocative mind behind watchmaker H. Moser 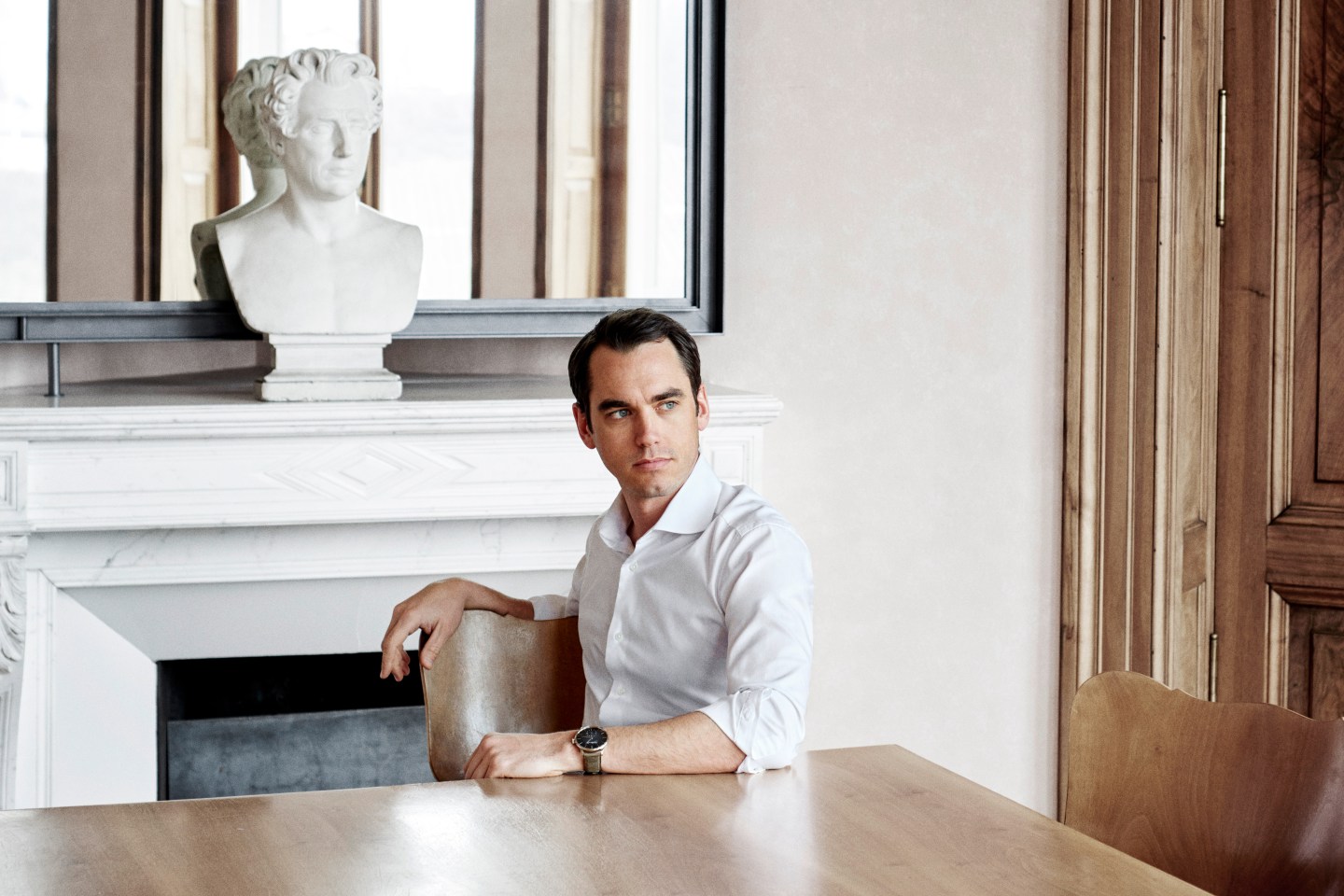 Watchmaking is an industry steeped in history and tradition, with names like Vacheron Constantin, Breguet, and Blancpain all predating the American Revolution, yet still producing fine timepieces today. (The market leader, Rolex, is a relative baby at just 115 years old.)

Flying under the radar—if a company can do such a thing for 192 years—is H. Moser & Cie., founded by Swiss watchmaker Heinrich Moser in St. Petersburg, Russia, in 1828. Moser produced pocket watches for the Russian aristocracy at the same time Gustav Fabergé was dressing them in jewelry; even Vladimir Lenin owned a Moser pocket watch. But the fame of the brand faded with the fortunes of the Imperial Court and barely survived the 20th century.

In 2012 the brand was acquired by the Meylan family, whose history in the watch industry goes back several generations. Patriarch Georges-Henri Meylan, who was CEO of Audemars Piguet for 21 years, entrusted the running of Moser to his then 35-year-old son Edouard Meylan, an engineer and Wharton MBA who was lured back to his ancestral industry. The Meylan family had identified a distressed asset but one with clear potential, a talented team of watchmakers, and a genuine history; now that asset is paying dividends. Fortune spoke with Edouard about what it takes to run an independent watch brand, how to stand out in the marketplace, and how the company is navigating a global pandemic. This interview has been edited for clarity and length.

Fortune: Is the Moser that exists today 192 years old or eight years old?

EM: Like everything, it’s an evolution, right? This brand, except for a period of 15 years during the quartz crisis [in the 1970s and ’80s], has always been in production. There has always been a continuation of philosophy and approach from the founder and the people that followed him. When I look at our products today I see many links [to the past]. But we are not stuck in history. It’s important to be inspired but not get stuck.

What were the things that attracted you to the brand?

What made me fully fall in love with Moser was its approach to engineering. It’s probably the most Germanic brand in Switzerland. And I studied engineering in Germany, my wife is German, and I have always been attracted to the philosophy of German engineers and designers like the Bauhaus. My predecessor [former Moser CEO] Jürgen Lange was East German, and I think he brought a lot of that, and I wanted to keep that. Also I fell in love with our perpetual calendar movement. I think it’s still one of the most amazing movements out there. A watch is there to give you the time and date, so it’s one of the most practical movements there is. And fumé dials, Moser was doing them in limited editions, and we thought, “Wow, this is so cool, nobody is doing that.” And now I think everybody is!

So where was the brand going wrong?

There were many things. Some quality issues. But the main thing was efficiency. When you develop products like these, if you have a pure engineering approach then you create your dream watch, which is great but also very dangerous because you’re not considering the cost of production and how much you can sell it for. So we really worked on efficiency in production. We reduced the time it took to assemble a perpetual calendar from 90 hours—that’s two weeks—to 30 hours. It took time and investment, but it’s one thing that transformed the brand from bleeding money to becoming profitable.

Another thing was brand identity. Even though the watches were costing a lot to produce, they were being sold rather cheap, and people were saying, “Oh, Moser is great value for money.” And for me that’s shocking, because value for money has nothing to do with luxury. It’s the opposite of that. So I’m trying to make an emotional link with the brand and customers. We do that through transparency and honesty, but also by being provocative and making sure nobody is indifferent about Moser—whether that opinion is good or bad.

I’m trying to make an emotional link with customers. We do that through transparency and honesty, but also by being provocative.

Speaking of being provocative, Moser makes these very elegant, classical-looking watches, but you’ve also stirred up plenty of controversy with some of your concept designs. How are these products part of the same brand?

I mean, if you look at an artist, we say in French that you cannot look at one specific painting: You need to look at a body of work to understand them. The commonality with all the concept watches is really the message behind them, rather than the product itself. It’s really that they were symbols of an idea or philosophy or values that we wanted to fight for. For example, people were asking us, “Are you going to make a connected watch? Is the connected watch going to destroy the watch industry?” And then boom, we launched the Swiss Alp watch [which bears an uncanny resemblance to the Apple Watch]. It was very classic and elegant but a modern watch. And it answered those questions.

Your latest release, the Streamliner, is a stainless steel sport watch that hits on a wider trend started by the Audemars Piguet Royal Oak. How do you stand out in what is now a very crowded segment?

I said, “Okay, how do I grow my brand? I want part of this cake.” You know it’s very opportunistic how I’m saying it, but all these brands saw the same thing and came to the same conclusion. But when you’re a smaller brand you need to be able to have your product on a tray next to something from a bigger brand, and it has to stand out. So our interpretation, the Streamliner, has a very singular case that stands out and adds something to this industry, rather than being a copycat of something that has been done for 45 years. And already it has been a huge success.

As a whole, Swiss watch exports were down 35% in the first half of 2020 as a result of the pandemic. How has it affected you?

I was listening to an interview with [industry veteran] Jean-Claude Biver, who said, “Crises are opportunities for independents.” And he’s right. I have to be honest, we’ve had an amazing year. We launched the Streamliner Chronograph in January, just before the lockdown, and we had orders before we even launched it. We launched a collaboration with [fellow watch brand] MB&F, which got a lot of attention. We implemented an online platform within two weeks of Switzerland going into lockdown, and that’s now anywhere between 20% and 25% of our revenue each month, and we sell directly around the world. So if you’re a brand like ours and you have the right products and you can react, then you can still have a very successful year.

“Look Ma, no hands!” This version of Moser’s square dress watch (which bears an uncanny resemblance to the Apple Watch) takes the form to its logical conclusion by getting rid of the hands. Instead the time is told through the striking of internal gongs, which ring out the hour, quarter hour, and minute.

Moser’s Swiss Mad Watch was made to protest a change in Swiss government policy regarding the term “Swiss Made”. Previous rules meant that 50% of a watch had to be made in Switzerland to be called a Swiss Made watch. That changed to 60% but included research and design costs, so that theoretically a watch could be made nearly entirely outside of Switzerland, as long as its domestic R&D was high enough. To thumb their nose at the authorities, Moser made the most Swiss watch imaginable by setting real Swiss cheese in a resin for the case, adding a red dial with white markers to evoke the Swiss flag, and making a strap from domestic cowhide. The price, 1,081,291 francs, was meant to be “disconnected from reality” and alludes to the founding of Switzerland on August 1, 1291. Moser donated the watch, which was auctioned at Christie’s to raise money for the Foundation for Swiss Watchmaking Culture.

Made from natural mineral stone and lichen from the Swiss Alps, the Nature Watch concept was introduced by Moser along with the announcement that the watchmaker would be committing to zero carbon footprint and the use of Fair Trade materials in its manufacturing.

Most watches need their date adjusted five times a year to account for leap years and months with fewer than 31 days. A perpetual calendar is a complex mechanism that will show the right date every day from now until March 1, 2100, without needing adjustment.

From the French word for “smoke,” fumé refers to dials that gradate from a single color in the center to a dark outer ring, as shown on the H. Moser Streamliner Centre Seconds.

Designed to counteract the effect of gravity on a pocket watch’s accuracy, the tourbillon mounts the watch’s critical timekeeping components in a rotating cage.

A version of this article appears in the October 2020 issue of Fortune with the headline “The provocateur.”