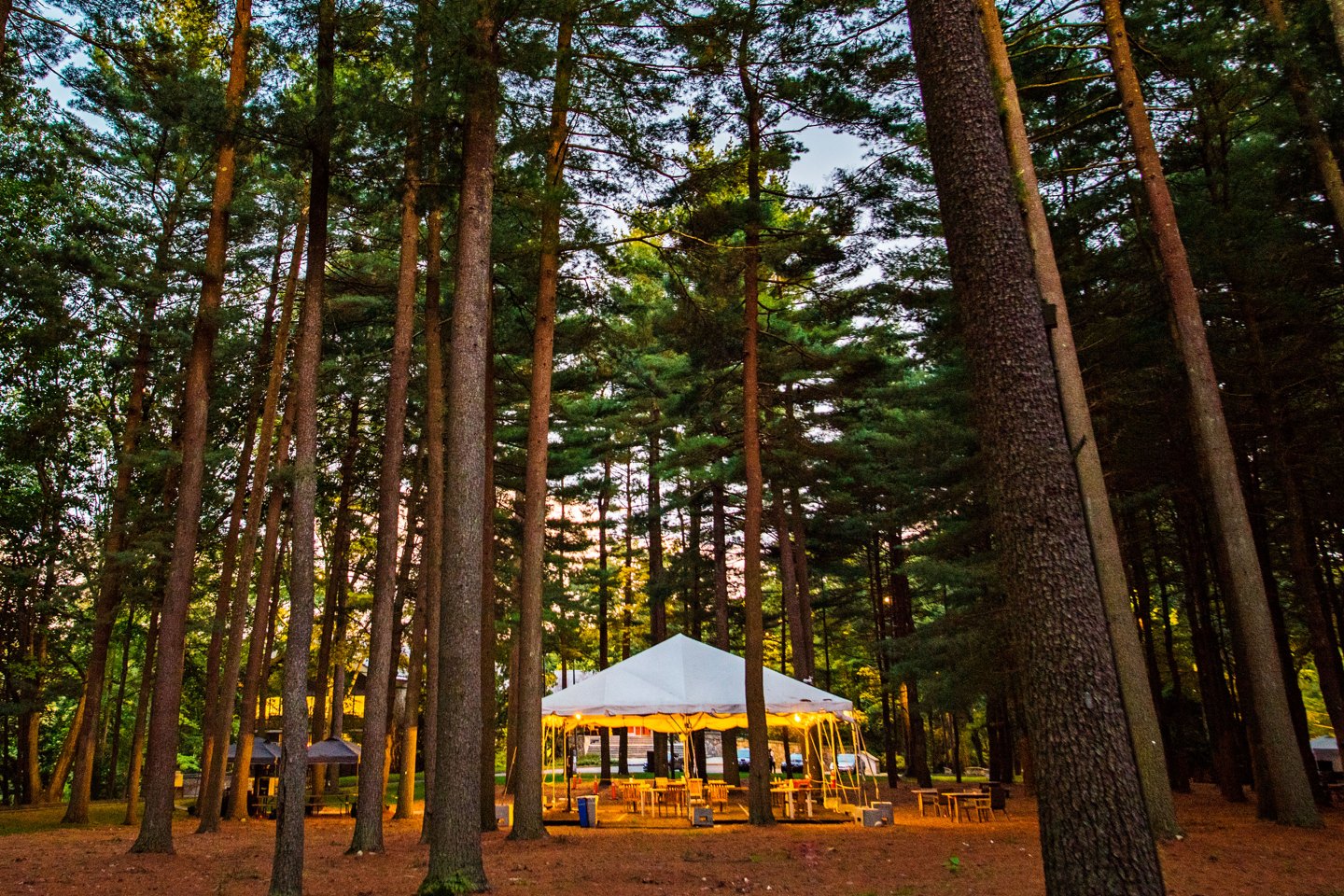 Ray Dalio founded his hedge fund Bridgewater Associates upon the principle he calls “radical transparency.” Yet the firm had perhaps never practiced the concept quite so literally until this spring, when they applied it to their very own walls: Indeed, for more than four months, Bridgewater has operated an office outdoors.

Out among the pine trees across from Bridgewater Associates’ headquarters in Westport, Conn., sit as many as 50 employees who help manage the $140 billion in assets of the world’s largest hedge fund. They moved out there in May, lugging monitors and other equipment into the woods as the coronavirus made traditional trading floors hazardous.

Bridgewater has plans for catastrophes—it prohibits its senior executives from taking the same plane or bus and even from mingling all together during bad flu seasons—and readies at least four locations, including a remote emergency site, so that it could still execute trades in the event of a natural disaster or cyberattack. But those backup offices had their own problem during the pandemic: They were all indoors. “We’re sitting outside—that’s never been a part of our plans,” says Nir Bar Dea, cohead of Bridgewater’s investment engine.

Tracking the coronavirus, Bridgewater had shut its offices to all but essential staff at the end of February. But a couple of months later, missing in-person teamwork, it sought to reopen them. Staffers immediately realized they could not collaborate inside. “I was like, we got to take the masks off,” recalls Bar Dea. The multitude of requisite safety protocols were “more stressful than calming,” he adds. “The move outside just flipped that completely.”

Bridgewater’s famous Monday morning meetings now include 25 people congregated under the main tent, plus more than 100 others on Zoom; here, founder Ray Dalio can be seen joining the call, in the upper right corner.
Courtesy of Bridgewater Associate

While everyone on campus takes COVID-19 tests twice a week, masks are not required out in the woods, where furniture is spaced well apart and a safe distance can be maintained. The firm’s team quickly assembled open-sided tents as shelter from the elements, upgraded the Wi-Fi, and procured additional kayaks for socially-distanced recreation. Bridgewater’s famous three-hour Monday morning “What’s Going On In the World” meeting now includes 25 people congregated under the main meeting tent, plus more than 100 others Zooming in on the large screen mounted to its side. In the background is a thicket of tall pines, their needles forming a reddish carpet beneath.

If the bucolic scene has some of the look of a campground, it also has much of the feel. Bridgewater staff have learned to protect their chairs from falling tree sap, and replaced their screens and webcams with weather-resistant versions after the original ones failed within a couple of weeks of outdoor exposure. The firm even solved for its new feathered neighbors’ chirping on video calls, deploying noise-canceling software Krisp—which also helps those with kids and barking dogs at home. (“I hear a lot of birds; you don’t hear any of them,” Bar Dea explains via Zoom, in a t-shirt and bare feet, having kicked off his flip flops.)

And Bridgewater strategically located its tented workstations to avoid hikers on nearby trails accidentally stumbling upon them. “We’re also a hedge fund where people are trying to find out what we’re doing,” says Hadley Haslegrave, Bridgewater’s real estate manager. “You have to think about security too, which is much easier when you’re in a building than when you’re outside of the building.”

Another pro tip for woodland working she recommends: “Wear sunscreen every day, no matter what.”

New England climes are fickle—Bridgewater temporarily closed the site during an August hurricane—but the team plan to work out there as long as they can, whether in parkas and hats—until the end of October, they estimate. “Comfort doesn’t have to be it feels like indoors; you could have other positive aspects to being outside,” Bar Dea adds. (They draw the line at snow, and are already planning to take the setup inside for the winter—though it may necessitate overnight stretches: “Think the NBA bubble in Disney,” he says.)

Bridgewater employees working out of its Westport, Conn. offices have fallen into an unofficial routine: Conversations go outside, Excel work inside. New challenges include “tree problems.”
Courtesy of Bridgewater Associate

After all, productivity metrics for the investment engine have improved since the move al fresco; the group intends to use the woodsy workspace next summer too, regardless of whether COVID still lingers.

They just may have to put up with an occasional interruption: Soon after market close one day in early September, an old oak tree crashed down steps from the big tent. “We’ve had a lot of tree problems lately,” adds Haslegrave. Luckily, it only hit the parking lot.

A version of this article appears in the October 2020 issue of Fortune with the headline “A hedge (fund) in the forest.”