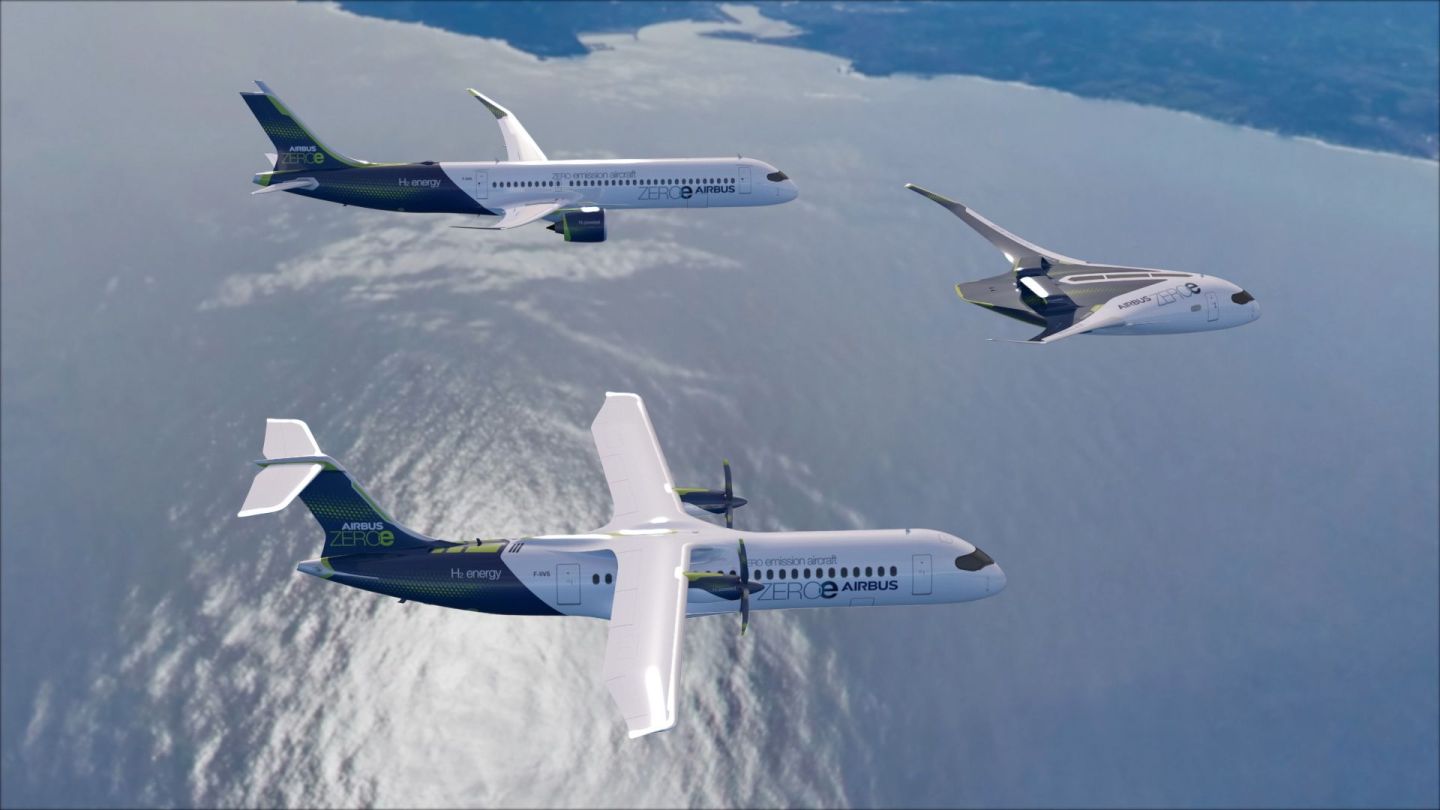 A few months ago, the French government gave the country’s aerospace sector a $16.8 billion bailout, with one notable condition: Around a tenth of the sum would need to be spent speeding up the development of a new, carbon-neutral airplane.

Airbus, the Toulouse-based European plane-building consortium, had already been working on a hybrid-electric prototype, but that project died in April, thanks to the coronavirus pandemic hitting both Airbus and engine partner Rolls-Royce hard. What the French government was proposing was not electric power but hydrogen—and it wanted a plane ready by 2035.

On Monday, Airbus showed off its first concepts for the “ZEROe” aircraft. There are three of them, and while all rely on hydrogen power—a fact Airbus claims could lead to a halving of aviation’s CO2 emissions—they are otherwise quite different.

All three concepts look at least a little different from today’s aircraft, owing to the requirements of storing and using hydrogen for power. The most radical design is for a “blended-wing body” that resembles a cross between a stealth bomber and a space shuttle. This one can carry up to 200 passengers.

Airbus’s “turbofan” design looks more traditional and, as the name suggests, uses a hydrogen-fueled gas-turbine engine. It can carry 120 to 200 passengers and has a range of more than 2,000 nautical miles, making it viable for transcontinental flights.

The third design uses a turboprop engine, has half the range of the turbofan concept, and can carry up to 100 passengers.

“These concepts will help us explore and mature the design and layout of the world’s first climate-neutral, zero-emission commercial aircraft, which we aim to put into service by 2035,” said Airbus CEO Guillaume Faury in a statement.

However, as Faury also noted, the transition from emissions-tastic jet fuel to hydrogen won’t just require new planes and engine designs; it means the retooling of an entire ecosystem, from hydrogen transport to refueling facilities to, of course, airports.

“Together with the support from government and industrial partners we can rise up to this challenge to scale up renewable energy and hydrogen for the sustainable future of the aviation industry,” Faury said.

If development of the concepts goes to plan, Airbus will officially kick off its ZEROe aircraft program by 2025, with a full-scale prototype arriving in the latter half of this decade.

However, the news did not do much for Airbus’s share price (down 3.5% at the time of writing) on a day when it, like many other travel-connected stocks, was feeling the pain of rising coronavirus case numbers and the likely impact this will have on the sector.

Despite the largesse of Emmanuel Macron’s government, Airbus was at the end of June forced to announce 15,000 job cuts. The crystallization of aviation’s potentially hydrogen-hued future does nothing to change the fact that, in 2020, airlines are far more preoccupied with staying alive than they are with taking on new aircraft. Though the pandemic is at least encouraging carriers to retire their older gas-guzzlers more rapidly than might otherwise have been the case.