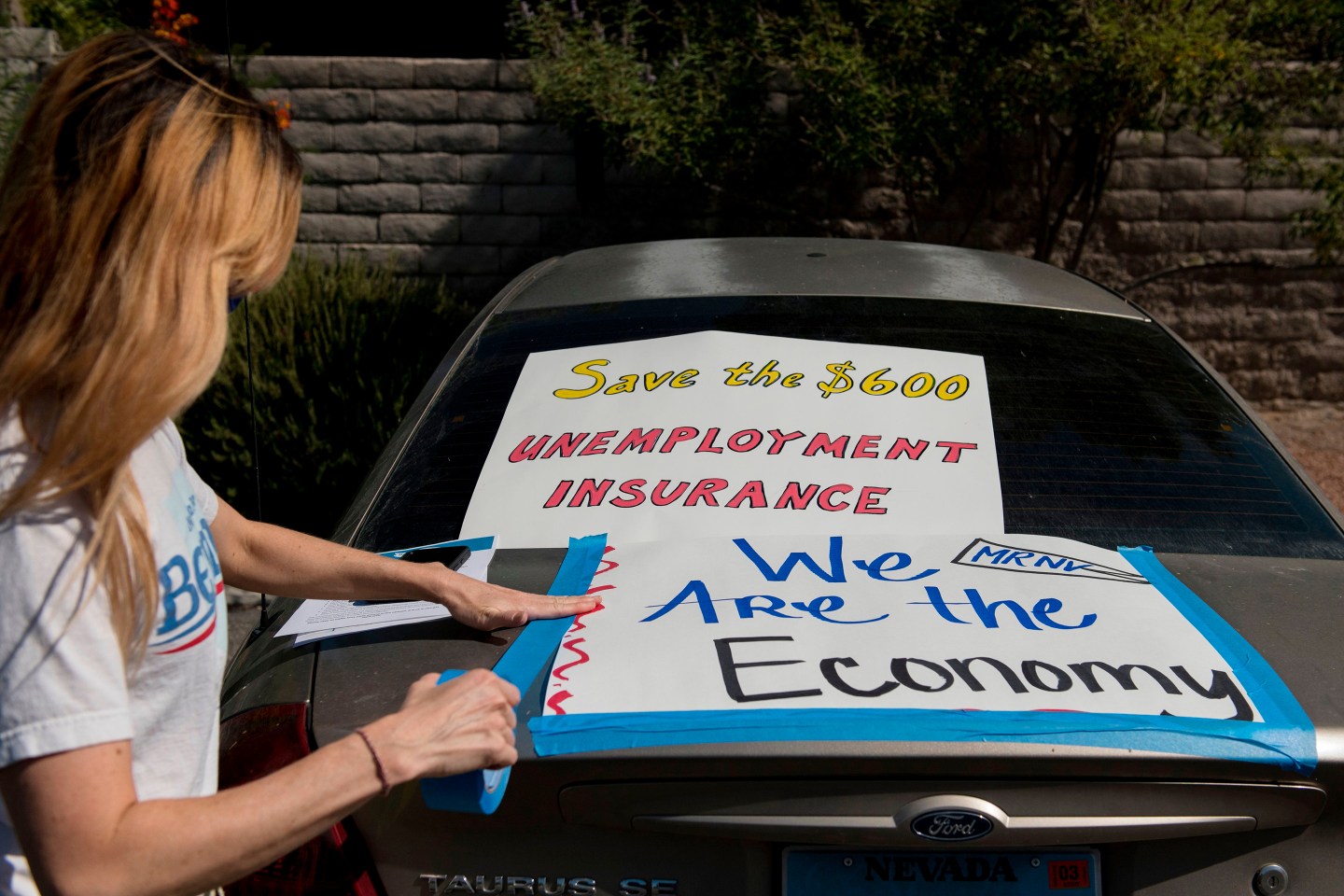 Francis Stallings tapes signs to her car before participating in a caravan rally down the Las Vegas Strip in support of extending the $600 unemployment benefit, August 6, 2020 in Las Vegas, Nevada. (Photo by Bridget BENNETT / AFP) (Photo by BRIDGET BENNETT/AFP via Getty Images)
Bridget Bennett—AFP/Getty Images

Congress must act now, or millions more workers will lose their jobs without a safety net to catch them. Every job we lost has a ripple effect, and all the warning signs for our economy are flashing red.

Since the pandemic began, 55 million Americans have filed for unemployment. That’s not even counting the undocumented workers who are ineligible for benefits or parents—mainly women—who left the workforce to care for their kids.

Without a real relief package, millions more will soon join them, including hundreds of thousands of flight attendants, pilots, baggage handlers, gate agents, and other aviation workers.

So far, almost no aviation workers are out of work, thanks to the Payroll Support Program our unions fought for in the CARES Act. The program stabilized 2.1 million jobs so efficiently that overwhelming bipartisan majorities in both chambers support a clean extension.

But if there’s no relief package, aviation will join the long unemployment lines and our country will lose more of the jobs we support—in manufacturing, hospitality, transportation, and beyond. And the crisis for workers will be even more disastrous.

Many of the 55 million who filed for unemployment have stayed afloat because of the $600 enhanced unemployment benefit Congress included in the CARES Act. But that program ended on July 31, and economists from across the spectrum are warning that we’re headed for disaster unless Congress acts.

Last week, JPMorgan Chase released a study showing the extra $600 propped up and spurred consumer spending, while warning that delays in processing benefits could cause a drop in spending bigger than the 2008 Great Recession and significantly shrink our economy. After talks broke down and the White House issued empty executive orders, JPMorgan followed up its study with another dire warning to Congress that it must act soon.

The National Bureau of Economic Research agrees, saying failure to reach a deal will lead to a 44% drop in local spending. Even if the benefit is reduced to $400, we’d see a steep drop we can’t afford (and for most, Trump’s executive orders will never deliver a single dollar).

And these awful projections might be best-case assessments. The Economic Policy Institute (EPI) shows the spending generated by that extra $600 is supporting 5 million jobs. If the dollars disappear, so will the jobs they support.

Millions of workers can’t make ends meet even with the $600. One in three Americans is behind on housing payments, and 30 million to 40 million people face eviction in the coming months. Without a deal in Congress, those numbers will skyrocket.

It is utter nonsense that enhanced benefits are keeping people out of the workforce. Tens of millions of workers are competing for far fewer jobs than were available just six months ago. For every job available, there are five people looking for work—and those few jobs are now in jeopardy too.

Letting the enhanced benefits lapse is far from the only thing that will cause massive job loss. State and local governments are facing huge shortfalls, and begging Congress for help. Without it, there’s another huge unemployment wave coming.

How big a wave? EPI’s research estimates 5.3 million critical public workers will lose their jobs over the next 18 months without a major federal investment in our state and local governments to keep public transportation going, rural hospitals open, teachers educating, and sanitation workers doing their jobs.

It takes a pretty big crisis to see unions, economists, and corporations calling for the same outcomes. Now add in Federal Reserve Chair Jay Powell, who practically begged Congress to extend the $600 benefit and fill the gaps in state and local budgets.

All of these numbers are predicated on the economy staying about where it is, but that’s no guarantee. As coronavirus case numbers remain staggeringly high, consumer spending is dropping again and businesses that reopened may be forced to close again. Much of the money Congress allotted for the Payroll Protection Program (PPP) is spent and gone, even as millions of small businesses struggle to stay afloat.

If Congress acts to maintain the $600 benefit, provide aid to state and local governments, revamp the PPP, and extend the Payroll Support Program, we can save more than 10 million jobs, while preventing millions of unemployed people from falling into total crisis.

Throw out everything you’ve learned about how the economy works. We’ve never faced a situation like this. The cost of letting our economy go into a free fall is far greater than the cost of protecting jobs and keeping people safe while we fight the COVID-19 pandemic.

As we stand on the precipice of a second Great Depression, we can’t afford to go small. When the virus surges again, more jobs will disappear. Without real relief, there will be nothing to slow our descent this time.

From U.S. Postal Service workers to educators to sanitation workers to bartenders to flight attendants, working people are looking to Congress to take action for our jobs.

I know there’s broad support across parties for reaching a deal today. If Senate Majority Leader Mitch McConnell can agree with Speaker Nancy Pelosi on a relief bill, we can save millions of jobs, fight the coronavirus, and prevent years of suffering. But the time to act is running out.

Sara Nelson is president of the Association of Flight Attendants-CWA and cochair of the Biden-Sanders unity task force on the economy.