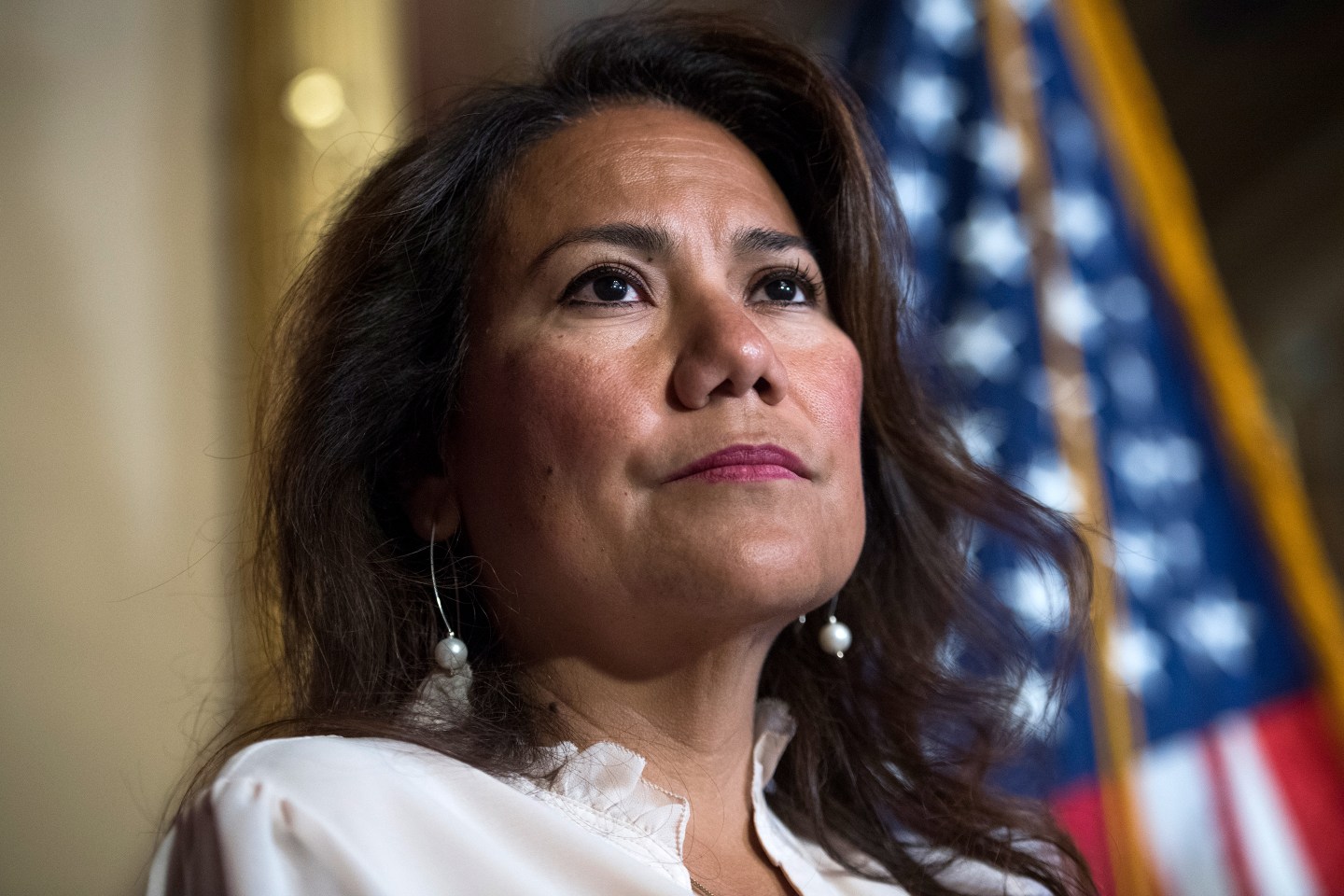 More women than ever before are running for Congress in 2020, beating a record set in 2018, the cycle that was dubbed the second “Year of the Woman” as a wave of female candidates entered the political fray in reaction to the 2016 election of President Trump.

Those 2018 candidates—many of them now officeholders—offer lessons for this year’s crop of contenders, who set the new record in large part thanks to an increase in Republican women joining their Democratic peers in seeking Congressional seats. The women of color who broke barriers running in 2018 are featured in a new PBS documentary And She Could Be Next. The documentary aired last month and is available to stream on the PBS website through August 29.

The two-episode series features Rep. Veronica Escobar, a congresswoman who now represents El Paso, Texas, campaigning in 2018. Her story is accompanied by the successful campaigns of Rep. Lucy McBath and Rep. Rashida Tlaib—as well as Stacey Abrams’s hard-fought, but ultimately unsuccessful bid to become governor of Georgia. “I’ve never served in the military, but what I felt was something I can imagine is akin to those patriots who feel the need to enlist in a time of war,” Escobar says of running for office two years ago.

Escobar is shown knocking on doors and fighting for El Paso’s Latino community. A former county judge, the congresswoman is a longtime advocate for U.S.-Mexico border communities—and she says the past two tumultuous years have made her relationship with the border “stronger and deeper” than ever before. She spoke with Fortune about immigration policy, her new goals now that she’s seeking reelection, and the kinship between women who ran in 2018. This interview has been edited for length and clarity.

Rep. Veronica Escobar: It’s important not just to recognize the presence of women of color in political movements but also the challenges breaking into political power that women of color face. How difficult it is to go without an income when you run for office, how difficult it is to tap into folks with the financial means to support your campaign. Those women who have been able to break through, those women who have made a difference historically have played such a critical role in paving the way for many of us. I’m a big believer in if you can see it, you can be it.

What are the biggest challenges you faced in your race for Congress?

The biggest challenge for me was figuring out how the sacrifice would impact my family. The things we would have to give up in order for me just to be able to be a candidate. It’s an enormous challenge for a middle-class woman like me. I’m not connected to wealth. I remember early on sitting with a group of folks from Washington, I was asking for help and trying to rally people around my campaign. One of the first questions you get asked when you’re running for Congress is, What’s your budget and how are you going to fundraise that money? They said, You’re going to have to call everyone in your circle and ask them to max out to you. That means $2,700 for the primary and $2,700 for the general. I remember telling my husband that night—I don’t even know if I can ask family and friends for ask for 100 bucks! Who has that kind of money?

There are a lot of folks who have that capacity, but candidates like me are not directly connected to those folks. They’re not in my circle of friends, they’re not my siblings, they’re certainly not my mom. I cannot tell you how many other women candidates of color have said, That’s exactly how it felt for me. We just face these additional obstacles.

What do all the stories in this documentary of the women of color who ran for office in 2018, including yours, told together in this way say to you?

What we all have in common is that what we saw unfolding across the country, the rhetoric we heard from the White House, motivated us into action. I’ve never served in the military, but what I felt was something I can imagine is akin to those patriots who feel the need to enlist in a time of war. I felt like the White House was at war against my community, against immigrants, against people of color, against brown and Black families, and I could not sit on the sidelines and watch. I felt this urgent sense of defending a community I love, and nothing was going to stop me. That’s what many of the women inside the documentary and outside it have all felt. It’s something that definitely binds us together.

What is different for you about running for reelection this time around compared to your 2018 race?

There are practical differences—I can’t go out and knock on doors. Running a campaign in the age of COVID makes getting your message out and talking to people very, very difficult. And I now have a record to talk about and defend at the federal level. It’s very different to run for Congress when you don’t have a Congressional record—you’re talking about your values, your plans, the issues. Now you’re talking about how you voted and why.

This time around, I did not have a primary challenge, and El Paso is a blue seat. While it was a complete blessing and relief not to have a primary opponent, I never take a race for granted. I’ve got a different goal than I did two years ago. Two years ago it was: win the primary. This election cycle, it’s to break records. To help turn Texas blue, to send a message about who the leader in the White House should be with a record-breaking number of votes.

The last two years have been incredibly intense for El Paso. All of us in the community have become much closer because our values have been tested. I’ve seen incredible beauty emerge from this community during times of incredible crisis. In 2019, we saw significant numbers of Central American families arriving at our front door in El Paso. While there was ugly demonizing of these families and abhorrent, cruel public policy coming from the White House—like family separation and long-term detention in conditions so inhumane it shocked the conscience—in El Paso we were rallying together. We were helping support many of the immigrants being released from ICE, providing hospitality, meals, clothes, food, providing the kind of help and support we should be offering the stranger. When El Paso was most tested in 2019, I feel as though we all came together in a way that strengthened the bond between all of us who have similar values.

Another example is the horrific Aug. 3 shooting, where El Paso was victim to the deadliest targeted attack against Latinos in American history. We lived through that horror together, we survived it together, we are recovering together, we are resilient together. I have felt the community wrap her arms around me even more than ever, and I have wrapped my arms around her even more than ever. The last year-and-a-half has been extraordinary for a number of reasons, and painful, difficult, and challenging, but also very inspiring and uplifting and hopeful.

Is my relationship with El Paso and the border today different than it was two years ago? It is. It’s much stronger and deeper, and I never imagined it could be.

What are your biggest concerns right now related to immigration policy, especially as related to policies we’ve seen implemented during the pandemic?

Because the world is rightfully focused on the pandemic and the terrifying nature of the increasing numbers of deaths and lack of national strategy to keep us safe, stories about what’s happening on the border and to immigrants have dropped in terms of priority for the American public and in the world of journalism. What we have been seeing here on the border is the President of the United States and his administration using the pandemic as an excuse to further their anti-immigrant agenda—from the announcement of the policy to limit student visas for those whose schools are offering online classes to horrifying continuations of attacks against the most vulnerable and poor immigrants.

Expulsions are happening under the guise of public health. Migrants are arriving on the border, being quote-unquote processed in about 90 minutes and returned to Mexico, even if Mexico is not their home country. Folks are so desperate they try again at some other location on the border–that’s created a new avenue for the cartels to exploit the vulnerability of these immigrants. The U.S. continues to fuel illegal activity just outside our doorstep. And it puts everybody at further risk of COVID. Agents are coming into migrants over and over again, creating higher risk for the migrant and the agent.

I’m not necessarily concerned about it in my district, but I’m concerned about it in my state. I live in a state with a governor and a lieutenant governor intent on suppressing voter turnout. Leadership in Texas has absolutely no problem making people choose between their safety and participating in an election. We have a governor saying, you can’t go to a bar, but I’m not going to let you vote from home, and when you go to the ballot box you don’t have to wear a mask. That screams voter suppression. They know if they can suppress turnout the odds are in their favor. I am deeply concerned there will be people in my district who will stay home because they’re afraid of getting sick. If there are no public resources for voter education, we’re going to fund it out of the campaign.

The documentary captures your relationship with Rep. Lucy McBath while you were both running for office. How has that relationship changed while you’ve both been in Congress?

I adore Lucy. It’s so fascinating that the film captured that. After I won my primary, I had candidates reaching out to me asking for donations and support. I reached out to Lucy, we had a great conversation about the border, immigration, compassion in government, I offered her financial support. And then we ended up serving together on the House Judiciary Committee. That was trial by fire. Some of the biggest bills passed by the House came through our committee—gun violence prevention legislation, the DREAM Act, the Equality Act. We came to know one another very well, become good friends, we love each other very much—and then of course we lived through impeachment together on the Judiciary Committee. There’s a group of us—freshman women on Judiciary—we would regularly get together for dinner, cocktails, our own little text thread, and we love and support each other very much. It’s been incredible to have that kind of moral support and friendship, fellowship, and love, and especially during such tumultuous times.