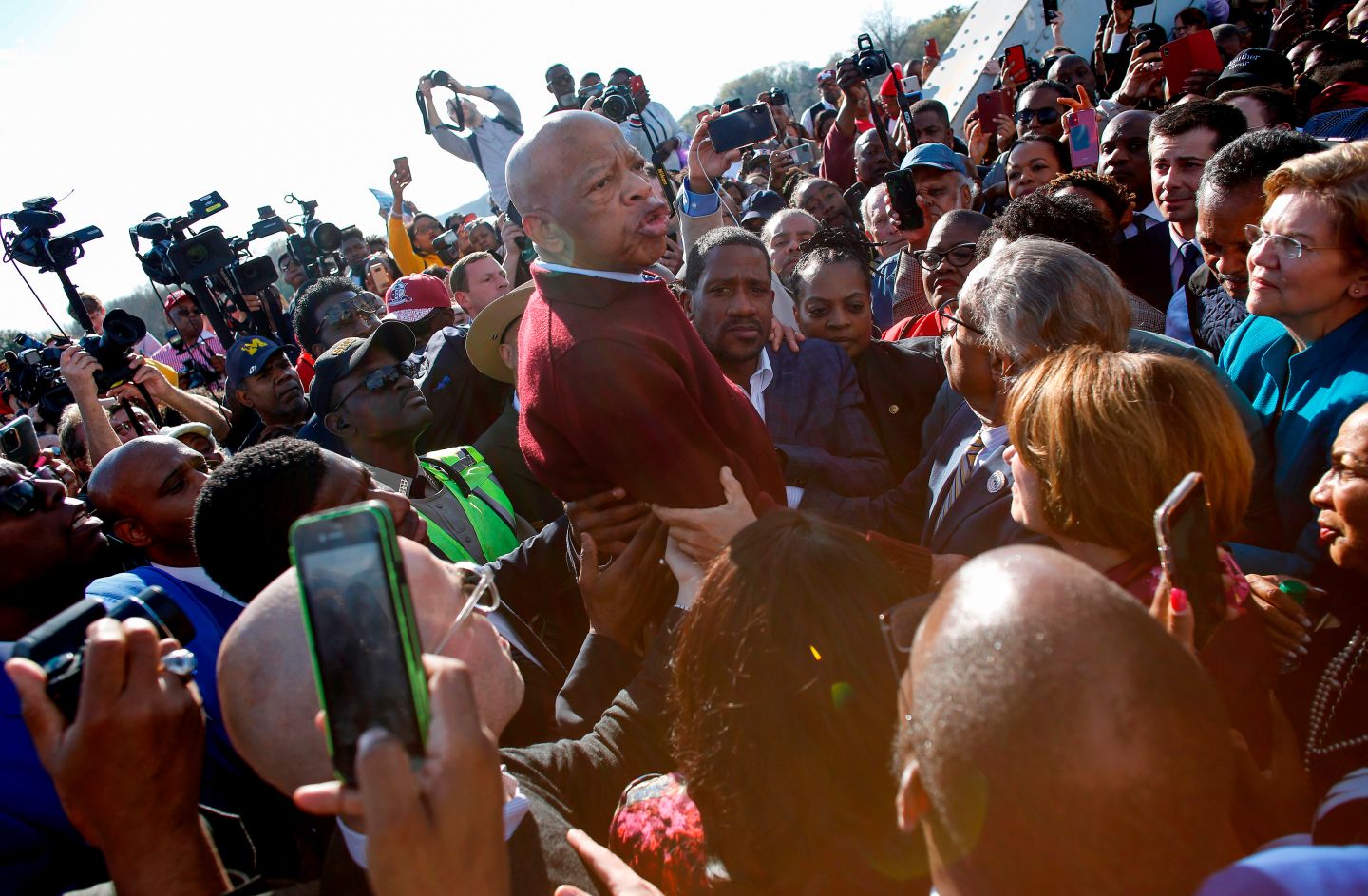 Good morning, Broadsheet readers! RBG is working through cancer (again), today is the Strike for Black Lives, and women who knew John Lewis reflect on his legacy. Have a meaningful Monday.

Lewis, who was a hero to so many, received an outpouring of grief and love from those who looked up to him and knew him. Many Black women were in agreement about what Lewis meant to them: he paved the way for their activism, fights for justice, and success. (President Barack Obama has said the same.)

A notable reflection came from Oprah Winfrey, who said she and Gayle King had spoken to Lewis last week in his final days fighting pancreatic cancer after false reports of his death at the time. “I had a final chance to tell him what I’ve said every time I’ve been in his presence: ‘Thank you for your courage leading the fight for Freedom. My life as it is would not have been possible without you,'” Winfrey said.

Ava DuVernay, who directed the 2014 film Selma in which actor Stephan James portrayed Lewis during the 1965 marches for voting rights, said she would “never forget what you taught me and what you challenged me to be.” DuVernay also shared some insight into Lewis not just as a larger-than-life figure, but as a humble man who was just as willing to share his senses of humor and fun as he was to fight for what’s right. DuVernay shared a video capturing Lewis’s humble appreciation of the March on Washington program Obama displayed in the Oval Office; it’s a wonderful behind-the-scenes moment, similar to the time he cosplayed as his 25-year-old self marching across Edmund Pettus Bridge with a train of children at Comic-Con.

Lewis was such a towering figure that he was a touchstone for many even before his death prompted these tributes. Last week, I interviewed Rep. Pramila Jayapal about her new book, Use the Power You Have: A Brown Woman’s Guide to Politics and Political Change. In that book, Jayapal writes that she is “an unusual elected official, in that I have been arrested three times for leading and participating in civil disobedience.”

When I asked her about that line, she responded: “I’ve had the honor to serve with John Lewis so I don’t feel like getting arrested—’good trouble’ as he calls it—is out of bounds for us as elected officials. I know some people don’t feel comfortable with it, but I feel it’s very appropriate. … If politics is the art of the possible, then it’s our job as activists and organizers, regardless of where we sit, to push the boundaries of what is seen as possible. Because the possible is not static.”

(You can read the rest of that interview here, where Jayapal also discusses the role of the South Asian community in fighting anti-Black racism, the lessons she learned from the matrilineal society her family came from in Kerala, India, and from parenting a non-binary child.)

I’ll leave you with the words of Bernice King, daughter of Dr. Martin Luther King Jr., on the passing of her father’s friend: “When I visited Uncle John last week, I looked in his eyes and said, ‘Well done.’ I told him that I loved him and that we are going to continue to fight. So I must mourn and move at the same time.”

- Get well soon (again), RBG! As you may have heard by now, Supreme Court Justice Ruth Bader Ginsburg is again being treated for cancer; according to a Supreme Court statement the disease is a recurrence of pancreatic cancer that spread to her liver. The 87-year-old justice is "fully able" to continue on the bench, and will continue working while undergoing chemotherapy. CNN

- Strike forward. Today is the Strike for Black Lives, a union-led day of action. Teresa Romero, president of the United Farm Workers of America (and the first Latina immigrant to lead a national U.S. union), writes about the longstanding connection between farm workers and the civil rights movement, going back to the relationship between Dr. Martin Luther King Jr. and Cesar Chavez. Fortune

- Made in America. In an op-ed for Fortune, former U.S. ambassador to the UN Nikki Haley and former Walmart U.S. CEO Bill Simon argue that coronavirus makes the case for bringing manufacturing back stateside. "Not only will this help our country come through this difficult time," they write, "it will protect the American people in future crises." Fortune

MOVERS AND SHAKERS: Pamela Talkin is retiring as the marshal of the Supreme Court and Christine Luchok Fallon is retiring as the court's reporter of decisions; both were the first women to hold their roles. Serta Simmons Bedding hired former Hayneedle CEO Shelley Huff as CEO of Tuft & Needle and EVP of direct to consumer.

- Justice for Breonna. A new lawsuit filed on behalf of Breonna Taylor's family claims that Taylor survived for at least five minutes after police officers shot her five times—but for 20 minutes, she received no medical attention. Officers rushed to assist Sgt. Jonathan Mattingly, one of the officers who fired his weapon; Taylor's boyfriend Kenneth Walker shot Mattingly in the leg after law enforcement entered their home without warning. During those crucial minutes as officers put a tourniquet on Mattingly's leg, no one tried to help Taylor, records show. A spokeswoman for the Louisville police department declined to comment. Louisville Courier-Journal

- In the market. In this piece for Fortune, economist Liliana Gomez Fernandez explains why a boycott of Goya Foods because of the endorsement of President Trump by the company's chief executive is not an example of "cancel culture," as some have claimed," but is instead an example of the free market at work. Gomez Fernandez calls this kind of boycott "alignment culture." Fortune

- One of a kind. Ellen DeGeneres' mantra on her daytime talk show is "be kind." But employees who worked for Ellen say the environment on the set is toxic, from racist microaggressions to the denial of bereavement leave. Employees place most of the blame on executive producers rather than DeGeneres herself. The show's EPs said in a joint statement that they "take all of this very seriously and we realize, as many in the world are learning, that we need to do better." BuzzFeed

Star critic of big tech has side gig working for Amazon, Apple Bloomberg

Desiree Tims wants to be the candidate for this moment BuzzFeed

"I won't just turn the car around. I'm gonna shut it off, kick you out and I'm gonna make you walk home."