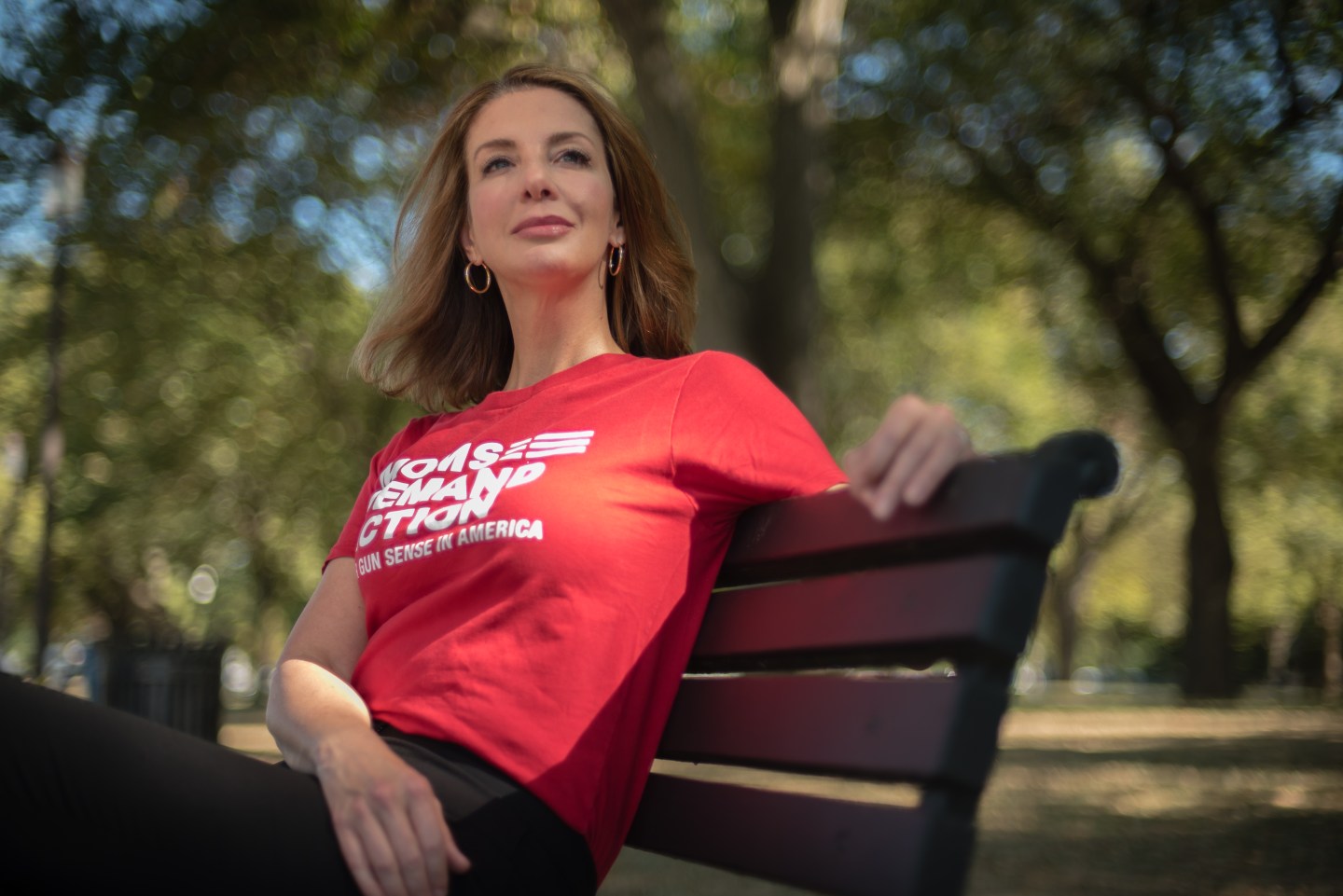 Andre Chung for The Washington Post via Getty Images

Now, her movement counts several hundred thousand members as it responds to the United States’ two most pressing crises: the coronavirus and the fight for racial justice. Gun safety is at the center of both those battles, particularly activism against police brutality. “Police violence is gun violence,” says Watts.

Watts spoke to Fortune about the surge in gun purchases during lockdowns, the path to reopening schools safety, and the longstanding connection between the fight for racial justice and the battle against gun violence. This interview has been edited and condensed for clarity.

Fortune: How has the coronavirus crisis affected the movement against gun violence?

Moms Demand Action founder Shannon Watts: We know that the gun lobby exploits tragedy and national disaster to juice gun sales. We’ve seen them do this all the way back to Hurricane Katrina. Of course, they did it again when the coronavirus crisis hit. We’ve seen a historic number of gun sales over the spring—at least twice as many as were sold in the same time period as last year. We’re also seeing an increase in domestic gun violence, in unintentional shootings, in gun suicides. The reverberations of the gun lobby’s actions will be with us for months and years after the COVID crisis is over.

If you look at the NRA’s Twitter feeds and materials they put out, they have a variety of marketing tools they use where they talk about natural disasters and chaos and how the only thing that will protect you is a gun. It’s very much: the government, the police—they can’t and won’t protect you and you can only protect yourself. There’s a lot of messaging around the need, particularly, to protect yourself from looters. The conversations we’ve been having as a country over the last few months—not just COVID but also police brutality—the NRA has perverted it and made it feed into their narrative that every American needs a gun to protect themselves.

Every country is experiencing the coronavirus crisis. In the midst of it, only America is giving civilians easy access to arsenals and ammunition.

You mentioned domestic gun violence. We’ve heard a lot about the increased risks of domestic violence while families are quarantined together—how does gun violence play into that?

We know that women are isolated with their abusers. We believe there’s a 20% increase in calls to domestic violence hotlines. We expect to see an increase in domestic gun violence. We’ve been working to secure more funding for domestic violence and suicide hotlines in the stimulus packages. It’s incredibly important that domestic abuse victims have help—that they have easy access to help just like, sadly, their abusers have easy access to guns.

Police violence is gun violence and that’s why our movement must be responsive as well. We’re partnering with leaders and organizations who are experts against policing. We’re committed to working with them to address white supremacy and racism at its roots. We are seeing an appetite among lawmakers to push through anti-police brutality legislation.

These up-and-coming generations are more diverse than our nation has ever seen. They’re clearly committed to recreating the country in a way that is more just and equitable. We’ve seen that in gun violence prevention and now we’re seeing it in anti-police brutality.

This is also a women-led movement. Women, and particularly suburban women, who help decide the midterm elections support this issue. The key voting blocs going into November are young people, Black Americans, and women in the suburbs (and the suburbs have become much more diverse since 2010).

When protests against the death of George Floyd and systemic racism started, were you worried about the potential for gun violence at these large gatherings?

Something we have seen, and is truly frightening, is we’re seeing armed insurrectionists show up across the country to silence opposition and threaten the lives of lawmakers—like in Michigan. It was a logical concern that would happen during these protests as well. Every nation struggles with viruses and with racism, but only America gives agitators easy access to arsenals and ammunition. These shooting tragedies are preventable, they’re senseless, but they’re uniquely American. When people show up to protests with guns, and are having a heated back-and-forth—it’s a uniquely American issue where somehow the Second Amendment is being allowed to supersede the First Amendment.

As schools work on plans to reopen—and parents and teachers expect to face a school year unlike any other—what are your concerns related to safety in schools?

If schools open back up in the fall, given the huge influx of gun sales this spring, many of which were sold to new gun owners, I’m very concerned about whether guns are being securely stored in gun owners’ homes.

Even before this crisis 4.6 million American children lived in homes with unsecured guns. We don’t know what that number is now, but I would assume it’s gone up. We know most school shooters get their guns from their homes because they’re unsecured. The best way to address gun violence in schools is before it occurs. I’m really concerned about the fall and what the implication of this increase in gun sales will be for our schools and our communities at large.

Last month, an image went viral of a white couple, Mark and Patricia McCloskey, pointing their guns at peaceful protesters. What did that image say to you?

The idea that you would need to come out of your house and threaten protesters with an AR-15 and a hand gun, clearly brandishing weapons—and it also was pretty clear they didn’t have much gun safety training—it again became a partisan discussion, with pundits on Fox News defending them as righteous. If you were protester walking by the McCloskeys’ house and winding your way to the mayor’s home, it would be terrifying to be held at gunpoint. Yet, no charges have been brought against them. That is not responsible gun ownership. The way they were behaving was the antithesis of a responsible gun owner.

When you’re talking about gun owners, 80% of them in America support stronger gun laws; even 74% of the NRA’s own members do. The McCloskeys represent a small minority of gun extremists. I’m really hopeful all of the gun extremism we’ve seen over the last few months will get the vocal majority of Americans out to the polls to vote the right way on this issue.

We saw it in 2018, again in 2019 in Virginia, and we’re using that same playbook going into November of 2020. We’re spending at least $60 million: $8 million in Texas, $5 million in Arizona, and $5 million in North Carolina so far. That’s because we know Americans, including gun owners, support stronger gun laws and restoring the responsibilities that go along with gun rights.

Looking ahead to November, what are you seeing? Which candidates are you excited about in the anti-gun violence movement?

There are so many gun sense candidates out there who are running on issue of gun safety—making this a priority, a policy platform. That’s a sea change in American politics. Not too long ago, guns was considered the third rail of American politics. Now it’s not just something that candidates no longer run from—they’re actually running on it. We know that it’s getting Americans out to the polls. We need to elect Joe Biden, who we’ve endorsed as a gun sense candidate. We need to flip the Senate. We need to hold the House—including positions like our own former spokeswoman at Moms Demand Action, Rep. Lucy McBath. We also have to keep flipping the makeup of state legislatures. We flipped seven in 2018 and hope to flip more in 2020.

We thought we’d be ringing physical doorbells right now, but we’re still ringing digital doorbells. But our movement was made for this moment. Moms Demand Action was started as a Facebook page. We haven’t missed a beat. We are confident going into November, but certainly not taking anything for granted.