‘Taxpayers deserve to know how their money is being spent’: Demands for PPP transparency heat up 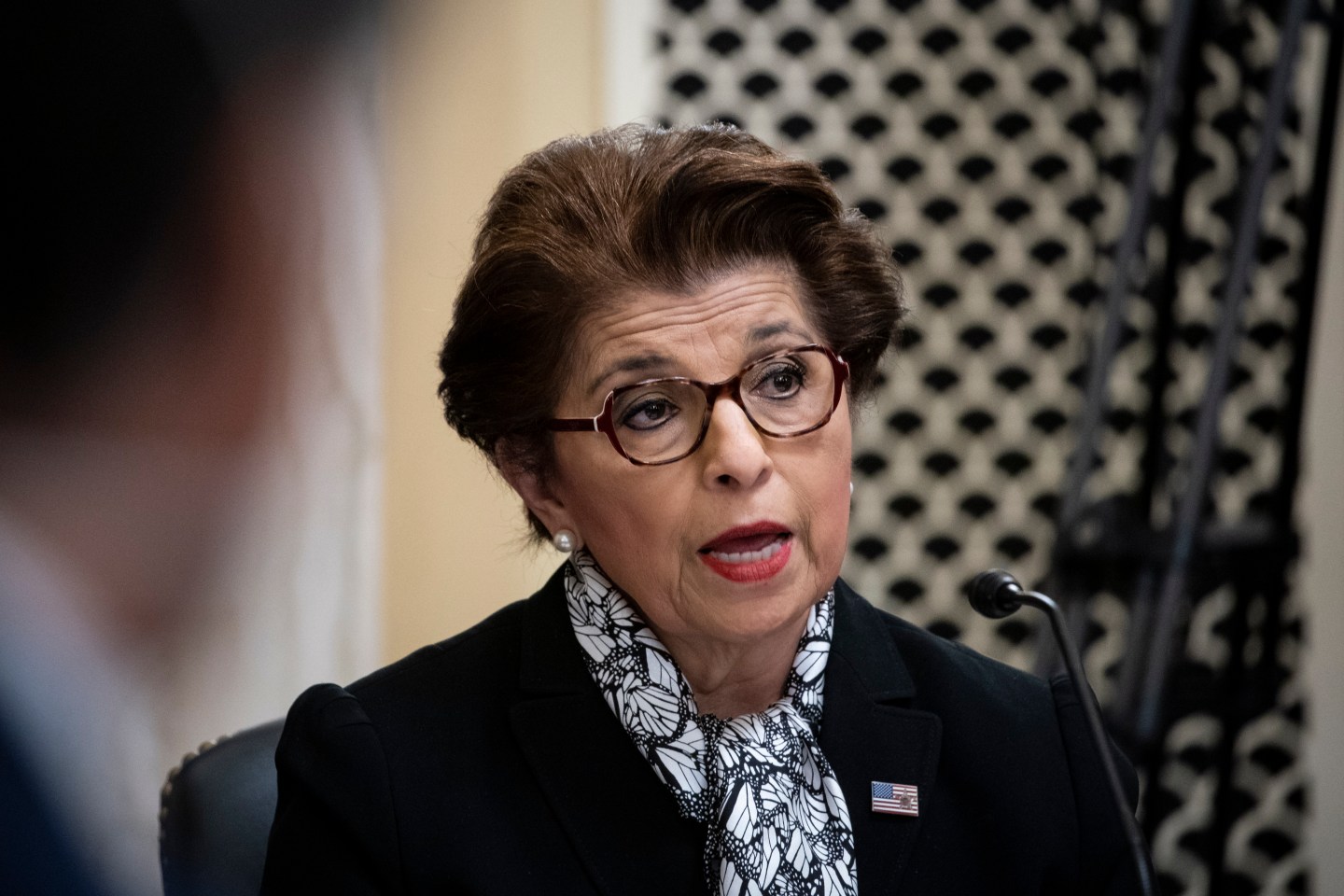 Jovita Carranza, administrator of the U.S. Small Business Administration (SBA), testifies at a Senate Small Business and Entrepreneurship Committee hearing on June 10, 2020 in Washington, DC. The committee is examining the implementation of the CARES Act, which has handed out billions of dollars of government-backed forgivable loans to small-business owners that keep employees on their payroll.
Wire photo: Al-Drago-Pool—Getty Images

Nearly from the outset, transparency has been a major concern for the $670 billion Paycheck Protection Program. And now government agencies, members of Congress, and watchdogs are pushing the Small Business Administration and Treasury to name the nearly 4.6 million PPP loan borrowers.

After just 13 days, funds for the first round of the program (then, some $350 billion) ran out, and the public later came to find out that many of the loans went to large, publicly traded companies and chains. Although Congress has since taken many steps to amend the program—from new rules of who was eligible to receive loans to directing funds to smaller businesses in rural areas—a big question still hasn’t been answered: Who exactly got the loans?

A “violation of the law”

Last week, Treasury Secretary Steve Mnuchin declared in testimony to Congress that names and amounts of borrowers would not be provided, saying they are “proprietary” and in some cases “confidential,” sparking backlash on Capitol Hill.

Now members of Congress and accountability agencies are amping up the pressure on the SBA and Treasury to release names, alleging the administration has blocked government oversight agencies from fulfilling their duties overseeing the SBA and Treasury’s $670 billion taxpayer program.

The Government Accountability Office (GAO), an independent oversight arm tasked with writing a report on how the program has doled out funds by the end of June, has thus far been unable to obtain information from the SBA about loan names and amounts. In a letter Wednesday, five Democratic committee and subcommittee chairs called the SBA’s failure to comply with the GAO’s requests for interviews, documents, and data a “violation of the law” and asked the SBA administrator Jovita Carranza to “immediately comply” with the GAO’s requests. Chuck Young, a spokesperson for the GAO, told Fortune Wednesday the office has not been given a timeline for when it would receive the information from the SBA. A spokesperson for the SBA did not immediately respond to Fortune‘s request for comment.

So far, there have been several attempts to procure the names and loan amounts from the administration, including a bill that failed to pass the House and requests from senators including Sen. Marco Rubio (R-Fla.) and Sen. Ben Cardin (D-Md.) for the SBA to publish further information on the loans. The SBA has provided breakdowns of the average size of loans, industries that received loans, and other broad data, but hasn’t provided individual names and loan amounts, even though the administration has said the data would eventually be released.

Meanwhile, on Monday, seven House Democrats, spearheaded by House Majority Whip James Clyburn, sent letters to the SBA and Treasury (as well as big banks involved in lending for the program) to demand transparency and names of recipients. House Democrats wrote, “Contrary to Secretary Mnuchin’s recent testimony, there is nothing ‘proprietary’ or ‘confidential’ about a business receiving millions of dollars appropriated by Congress, and taxpayers deserve to know how their money is being spent.” A spokesperson for the SBA did not immediately respond to Fortune‘s request for comment.

Additionally, government watchdogs like the Pandemic Response Accountability Committee (PRAC), an independent panel created to oversee the CARES Act, similarly warn of limited access. The inspectors general leading the PRAC warned congressional committees in a letter first obtained by the Washington Post that legal rulings and “ambiguity” in the CARES Act law could block their ability to oversee the implementation of some of its programs, like the PPP.

“We will have PPP loan disclosure”

In a shift in tone from the secretary’s previous testimony to Congress, Mnuchin said on Twitter Monday he “will be having discussions with the Senate [Small Business Committee] and others on a bipartisan basis to strike the appropriate balance for proper oversight” of the PPP loans, and “appropriate protection of small business information.”

But the PPP loan application itself says, “Information about approved loans…will be automatically released” under the Freedom of Information Act, including the name of the borrower and the loan amount. And traditional 7(a) loans through the SBA (the blueprint for the PPP) are not confidential, meaning the names of recipients are made public.

How that naming process goes, however, is still up in the air. Sen. Rubio wrote on Twitter Tuesday, “We will have PPP loan disclosure,” stating that there is “no dispute over larger loan recipients being disclosed,” and that the “only issue still being discussed with administration is how to treat smaller loans to mostly micro-business, sole proprietors & independent contractors.”

Indeed, Sen. Rubio said there are ongoing concerns from some small businesses, and “people who have the data are echoing concerns”—which have included revealing information about loan sizes (payroll is used to calculate the loan size) and how that might impact competition among firms—but “we are working to find ways to disclose that address their concerns,” Rubio said in a tweet Wednesday.

Still, some warn the ambiguity may impede efforts to direct future aid where it’s most needed. “We do not know which companies need the most help because the Trump administration has not released detailed data on the companies that have received PPP loans,” Sen. Cardin said in a statement last week.

Demanding details from the banks

In a similar vein, big banks have also come under fire since the program rolled out, as reports of banks prioritizing some customers over others surfaced early in the first round of funds.

But now, the House Democrats led by Rep. Clyburn are asking for information about loans and lending processes from eight national banks including JPMorgan Chase, Bank of America, Wells Fargo, Citibank, U.S. Bank, and others. In letters sent to each bank, the lawmakers, citing media reports, expressed “significant concerns that the two-tiered system that some banks reportedly developed for wealthy clients may have diverted PPP funds intended for vulnerable small business owners in underserved and rural markets.”

The loans were designed to be “first-come, first-served,” but many noted that because of the lack of initial guidance and the way the program was written, banks would process current lending customers first (which many did), leaving those without lending relationships out in the beginning stages of the program.

As part of the CARES Act, the House members wrote in the letter, the SBA was encouraged to issue guidance to banks on how to “ensure that the processing and disbursement of covered loans prioritizes small business concerns and entities in underserved and rural markets,” but that the SBA and Treasury have thus far failed to issue clear guidance to prioritize loans for underserved communities.

So far, lenders have allocated roughly $512 billion in funds for the program.

Additionally, at least four members of Congress including Rep. Roger Williams of Texas, Rep. Vicky Hartzler of Missouri (both Republicans), Rep. Susie Lee of Nevada, and Rep. Debbie Mucarsel-Powell of Florida (both Democrats) have acknowledged close ties to or have benefited from companies that received PPP loans, Politico first reported, and there are likely others.

Some senators are writing legislation to demand further transparency within Congress’s own ranks.

Sen. Joni Ernst (R-Iowa) said Tuesday she is proposing legislation to “require full disclosure of every member of Congress who may be benefiting from the [Paycheck Protection Program],” stating, “Members of Congress should disclose if they are taking taxpayer money,” she wrote on Twitter.