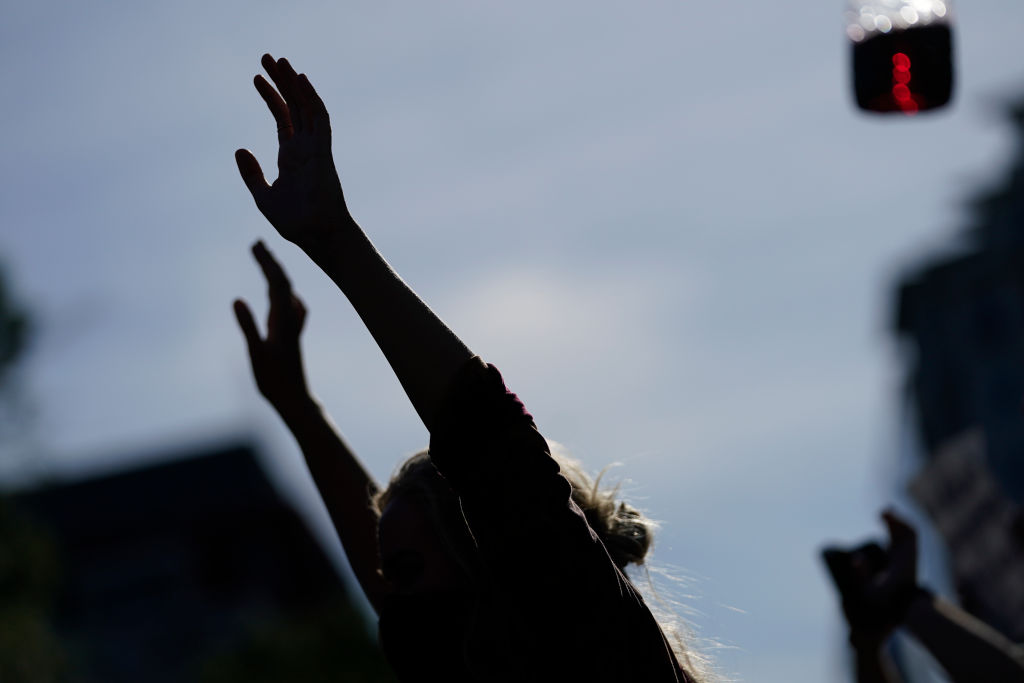 Demonstrators confront law enforcement during a protest on June 1, 2020 in downtown Washington, D.C. The death of George Floyd prompted protests in recent days and moved business executives to express support for the movement in support of black lives and against police brutality.
Drew Angerer/Getty Images

As protests over the killing of an unarmed black man by Minneapolis police spread across the U.S., Mark Mason, one of Wall Street’s most senior black executives, debated whether to weigh in.

People around him kept asking what he thought.

On a conference call last week to honor a group of junior executives inside Citigroup, an employee asked Mason, the bank’s chief financial officer, whether it planned to enter the political fray as it had on issues including gun control and protests by white supremacists. Mason’s wife and children encouraged him to speak up as well.

“It became obvious through the week that people needed to hear from the company,” Mason said in an interview Monday evening. “I wanted to speak out in a way that highlighted the atrocities of this incident, that explained what black Americans are feeling and that gave some way for people to help.”

The blog post he ended up publishing on Citigroup’s website late Friday began by repeating some of Floyd’s last words, “I can’t breathe,” 10 times. It has since drawn hundreds of public comments from bank employees.

“The response has been overwhelming,” Mason said.

The death of George Floyd in Minneapolis and other fatal police encounters now fueling protests nationwide have prompted executives from almost every major bank and investment firm to speak out. And behind the scenes, it’s driving conversations in an industry that wants to be viewed as more socially responsible, even as it struggles to deliver on promises to improve diversity within its ranks.

Executives of color are using the moment and their platform to speak out.

“It’s 2020, and enough is enough. We can no longer be silent,” Thasunda Brown Duckett, chief executive officer of consumer banking at JPMorgan Chase, said in a post on LinkedIn. Like Mason, she’s a rare black American in the top tiers of the U.S. finance industry. “Yes it’s painful, and my tears are real.”

For billionaire Robert Smith, founder of Vista Equity Partners, Floyd’s killing and other recent events—such as the shooting death of Ahmaud Arbery in south Georgia while he was out for a run—forced him to recall learning his uncle was shot dead by a white gas-station attendant after having just received his master’s degree and taking on a new job with the state of Colorado.

“This was almost 50 years ago, and the pain still lingers,” Smith said in a memo to employees. “When I see the face of George Floyd, Ahmaud Arbery, or Christian Cooper, I see myself as a young man; I see the faces of my children; and I am reminded of the many times in my life when I have been judged not by my character, but by my skin color.”

Cynthia Adams, a top lawyer at Jefferies Financial Group, expressed her dismay in a letter to colleagues. Coworkers told her it helped open the door for conversations in the workplace about race and politics. “I continue to feel the pain,” she said in a phone interview Monday. “My main reaction is ongoing grief.”

At many of the biggest U.S. banks, the percentage of black workers and executives has been slipping or stagnant. African-Americans accounted for 13% of JPMorgan’s U.S. employees last year, down from almost 19% before the 2008 financial crisis. At Goldman Sachs, African-Americans accounted for 2.7% of the top ranks last year, little changed from 2013, while black representation among the bank’s total U.S. workforce grew to 6.6% from 4.8%.

The Floyd incident came the same day as another racial flash point that shook Wall Street. Amy Cooper, a white employee at Franklin Templeton, was captured on video calling the police and saying, “There is an African-American man, I am in Central Park, he is recording me, and threatening myself and my dog.” Christian Cooper, a black man, had asked her to put a leash on her cocker spaniel in an area where dogs aren’t allowed to run free.

“Recent events have been absolutely disheartening and gut-wrenching,” Ashok Varadhan, the only nonwhite leader of a major business line at Goldman Sachs, said in an interview. “Whatever we are all doing is not enough,” he said. “We are failing miserably.”

In some cities, protests have included looting, arson, and other property damage. Images on social media show people breaking into and vandalizing JPMorgan, Wells Fargo, and Capital One Financial Corp. branches. Still, members of the financial industry said they don’t want such incidents to distract from the need to hold police accountable.

“They were all black Americans victimized because of their race,” Ken Chenault, chairman of General Catalyst, and other executives from the venture capital firm said in a blog post. “Accountability for their deaths only began after outraged Americans spoke out and took action.”

Some of the comments from bank executives were met with contempt online, where activists questioned whether the lenders would alter practices to help minorities.

And while some workers and customers flooded social media with thanks for the comments made by top bank executives, they also underscored how much more needs to be done.

“I, too, was deeply affected by that video. It made me fear for my black son, my black brothers, and the black fathers,” Racquel Porteous, a Citigroup employee, commented in response to Mason’s blog. “Often you ask the question, will we ever be free?”