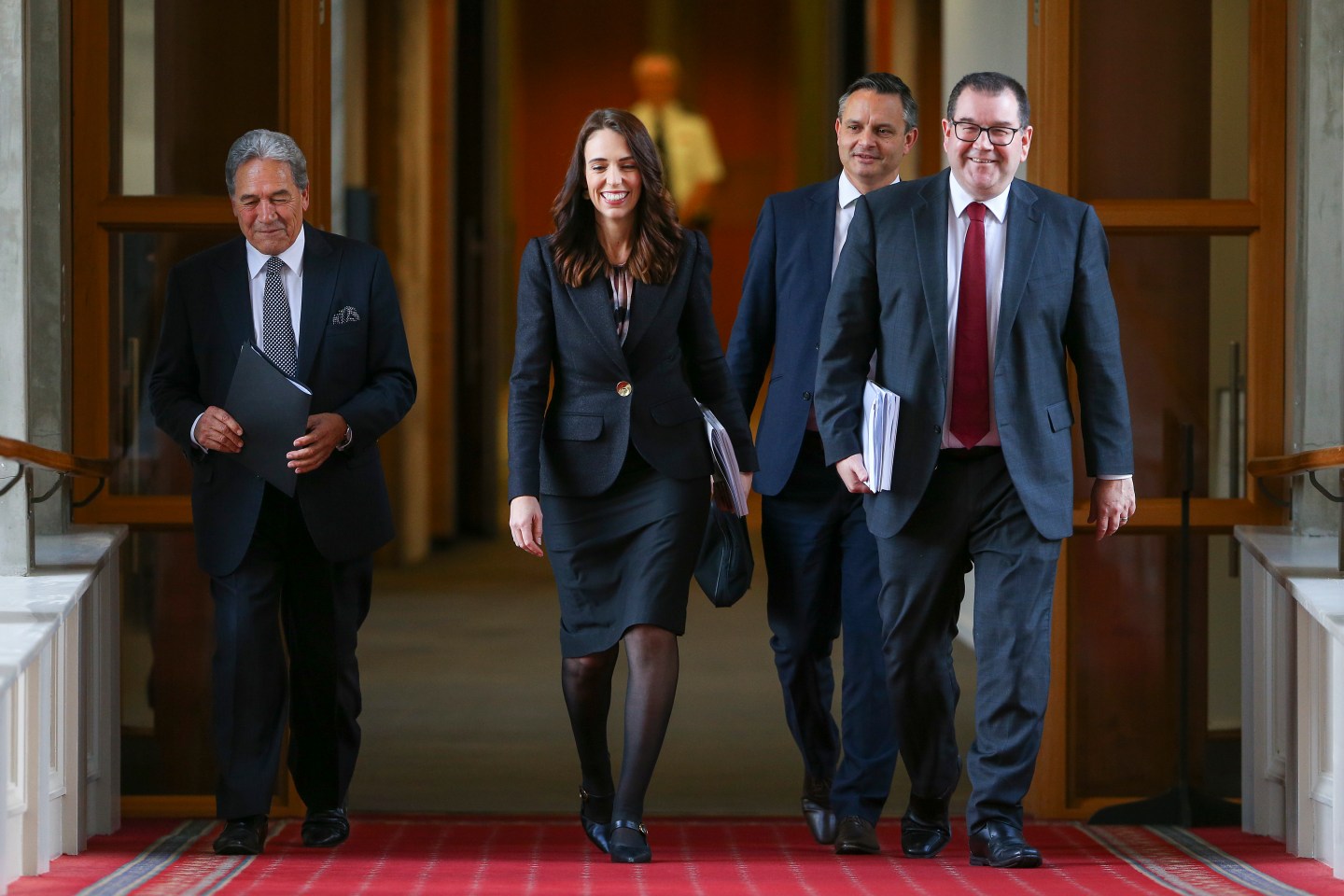 WELLINGTON, NEW ZEALAND - MAY 14: L to R: Deputy Prime Minister Winston Peters, Prime Minister Jacinda Ardern, Greens leader James Shaw and Finance Minister Grant Robertson walk to the house during Budget 2020 delivery day at Parliament May 14, 2020 in Wellington, New Zealand. Budget 2020 is the second budget handed down by Finance Minister Grant Robertson, with a focus on funding to create and retain jobs in the wake of the COVID-19 pandemic. In the single biggest spending package in New Zealand’s history, $50 billion has been allocated to the COVID-19 response and economic recovery plan, with an aim to to save almost 140,000 jobs across the country. The plan includes $3.2 billion for an eight-week extension of the current wage subsidy scheme. (Photo by Hagen Hopkins/Getty Images)
Hagen Hopkins—Getty Images

South Korea, the world’s seventh largest emitter of greenhouse gas, became the first nation to hold a presidential election under the cloud of COVID-19. The April vote was a landslide for the incumbent Democratic Party (DPK), buoyed by its stellar handling of the coronavirus outbreak.

Analysts say the win was an implicit seal of approval for the DPK’s own Green New Deal, proposed in March. The DPK’s proposal—which includes phasing out coal investments, investing in renewables and implementing a carbon tax—could make South Korea the first country in East Asia to commit to net-zero carbon emissions by 2050.

It might be easy to forget with everything else going on, but the U.S. is due a presidential election this year, too. Already, the climate has emerged as a key campaign issue, but the subject has become entangled with the economic pain wrought by the pandemic.

According to the New York Times, senior Republicans are arguing that the current restrictions and imminent recession are previews of life under a Green New Deal—as proposed by Rep. Alexandria Ocasio-Cortez (D–N.Y.) and Sen. Edward Marky (D–Mass.) last year.

The argument supposes that a Green New Deal would take jobs from carbon emitting industries—like airlines, mines, and others currently struggling to adapt to reduced demand in a COVID-19 world—forcing the country into recession.

The objection offers little consideration of how spending on sustainable industries would create jobs that offer longterm economic growth. Investor Agenda, a group that includes CERES and BlackRock, recently warned recovery plans that omit environmental considerations could “expose investors and national economies to escalating financial, health and social risks in the coming years.”

Outside the U.S., other governments are taking keenly to the notion of green recovery schemes, pledging funding that will pull economies out of the coronavirus crisis and mitigate the worst effects of the other ongoing crisis: climate change.

Ministers from over half the European Union member states have called for the European Green Deal—the EU’s general policy for sustainable growth—to be fully incorporated into any pandemic recovery scheme, writing: “We should withstand the temptations of short-term solutions in response to the present crisis that risk locking the EU in a fossil fuel economy for decades to come.”

Today, New Zealand, which has gone three days with zero new cases of COVID-19, allocated $600 million of its $30 billion recovery budget to build “nature-based jobs” in pest control and conservation. It doesn’t seem like much, but the country’s Green Party called the funding “a win.”

It’s worth noting that New Zealand isn’t even among the top 20 emitters of greenhouse gases. The U.S. is the world’s second largest polluter. A global green recovery needs to have the U.S. on board.

The U.S. is on track to produce more electricity from renewable sources than from coal for the first time ever, according to projections from the U.S. Energy Information Agency (EIA). Declining costs of renewables like wind and solar, plus the pandemic-induced dip in energy demands, could help renewables leapfrog coal. New York Times

The head of the International Energy Agency thinks oil demand will remain below pre-pandemic levels for at least a year. BP’s new CEO Bernard Looney says there’s a risk oil demand will never return, as changes implemented to tackle COVID-19—such as a switch to working from home—could outlast the pandemic. “Could it be peak oil? Possible. Possibly. I would not write that off.” Financial Times

As lockdowns decimate energy demand, renewables come out ahead of coal by Katherine Dunn

The coronavirus is driving a mental health crisis. Tech can help tackle it by David Feinberg

The coronavirus pandemic is creating a ‘double double shift’ for women. Employers must help by Sheryl Sandberg and Rachel Thomas

That's how many jobs the U.S. clean energy sector has lost since the virus struck, according to a report by BW Research. Shelter-in-place orders have halted the production of solar panels, electric vehicles and other clean tech, forcing the sector to shed 17% of its workforce. The number of job losses are more than twice the number of roles created since 2017. BW Research expects that figure to rise to 850,000 by the end of June.