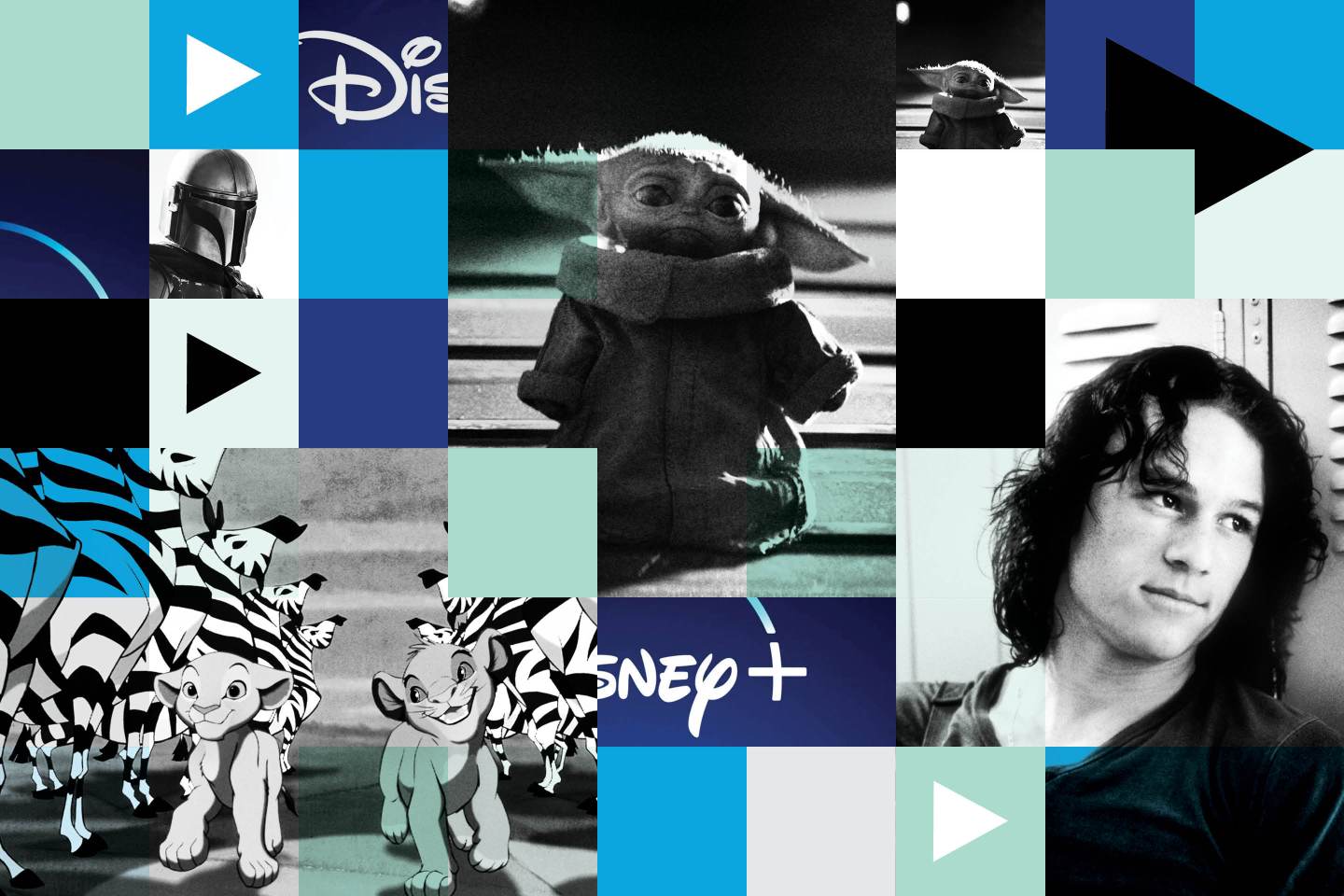 Disney+ is rolling out in Europe just as the coronavirus has caused nations to urge citizens to stay indoors. But it has already spent months racking up subscribers in the United States, thanks to a jam-packed catalog spanning Pixar classics, the Marvel Cinematic Universe, Star Wars, National Geographic documentaries, ’90s animated cartoons, and much more.

With so many options to stream, families surfing Disney+ might find themselves understandably overwhelmed. Fortune’s here to help, breaking down the major services’ offerings into a few distinct recommendations based on whatever mood our current global crisis might have you in (all of which are completely valid). And if nothing in the Mouse’s new House strikes your fancy, here are our Netflix and Amazon Prime guides, for your continued perusing pleasure.

Heath Ledger in the 1999 teen movie “10 Things I Hate About You.”
Buena Vista Pictures/Courtesy Everett Collection

10 Things I Hate About You A romantic-comedy classic you might be surprised to discover on Disney+, this ’90s touchstone featured one of the best non-clown-related performances by the late, great Heath Ledger, as the bad boy tricked into dating a smart-mouthed classmate (Julia Stiles), so that her sister (Larisa Oleynik) can get around their father’s strict dating rules and make out with the new kid (Joseph Gordon-Levitt). Twenty years later, it’s remarkable how smart and fresh its script still feels, piled high as it is with quotable one-liners and endlessly clever turns of phrase.

Meet the Robinsons A whiz-bang animated outing that heads to some surprisingly dark places—as well as a wondrously bright future of flying cars, cookie-baking grandmas, and musical gangster frogs—this 2007 effort came at a time when Disney’s animated output was seen to be running low on imagination, after a few high-profile misses. But even if that hadn’t been the case, this thoroughly hilarious and heartwarming story, not to mention its bedeviled bowler hats, would have been met with open arms.

Who Framed Roger Rabbit Pioneering and peculiar, this Robert Zemeckis–directed classic from 1988 renewed public interest in animation technology while crafting a delightfully skewed noir playground in which its mixture of animated cartoon characters and real actors could trade barbs and blows. Surprisingly, its off-kilter look holds up today; there’s something sneakily surreal yet effortless about its balancing of cartoon antics and the 1940s Hollywood sleuthing that brings private eye Eddie Valiant (Bob Hoskins) into Toontown’s heart of unlikely darkness.

Nala and Simba in the original animated “The Lion King.”

Inside Out Pixar’s most towering achievement, this 2015 animated insta-classic takes audiences inside the mind of an 11-year-old girl named Riley, introducing us to the five basic emotions responsible for informing and influencing behaviors in her everyday life. Those would be Joy (Amy Poehler), Sadness (Phyllis Smith), Anger (Lewis Black), Fear (Bill Hader), and Disgust (Mindy Kaling). Cubicle colleagues in the office of Riley’s brain, all five hover around a control console, eager to help their little human navigate the turbulence of a destabilizing move. More than just a brilliantly imagined tale and a beautifully animated family adventure, Inside Out invents a radically visual language for emotions, gently teaching it in terms children grappling with their many feelings will understand. The doors that open to deeper dialogue between children and the adults around them cannot be undervalued. Inside Out is at once an important public service and a work of true filmmaking wizardry all at once.

Sky High Too many missed this 2005 superhero comedy, but it demands revisiting in the age of the Marvel industrial complex. Refreshingly light on its feet and unironically enamored of comic-book sagas, the Mike Mitchell–directed movie split the difference between high-school comedies (especially Mean Girls and The Breakfast Club) and the save-the-world stakes found in most caped-crusader concoctions. As a result, its breezy, in-on-the-joke tone feels like more of a revelation now than it did then, amid the ongoing glut of too-big-to-fail blockbusters. And its characters—from Steven Strait’s adorably broody Warren Peace to Mary Elizabeth Winstead’s shifty upperclassman Gwen Grayson—are as memorably sub-Hughesian as ever.

The Lion King (1994) Sure, I’m highlighting this one in part as an opportunity to sucker-punch last year’s abysmal live-action remake. Is that petty? Absolutely. But there’s nothing like a soulless cash-grab from the more modern, mega-corporate Disney to remind everyone what a dream factory its animation studio once was. This emotionally potent, exquisitely drawn masterpiece still plays like Shakespeare in the Serengeti. Its songs remain the classics they always were, heartwarming and soul-stirring. And through its traditionally hand-drawn approach to realizing its world, The Lion King brings a measure of expressive, ecstatic humanity to its animal kingdom.

“The Child” and Pedro Pascal as the title character in “The Mandalorian,” which follows the travails of a lone gunfighter in the outer reaches of the galaxy, far from the authority of the New Republic.
Courtesy of Disney+

The Mandalorian The flagship series for Disney+, this surprisingly rich, impressively mounted Star Wars spinoff is a space western on the level that television hasn’t seen since Firefly went off the air. Its masked protagonist offers that perfect shade of Clint Eastwood cool, and its outer-reaches setting grants him an appropriately lawless sandbox to play in, complete with sea slugs and saloon shootouts. But let’s be real: The biggest draw of The Mandalorian (at least out of the gate, in the eight episodes currently available) is the presence of The Child, more commonly known as pop-cultural sensation “Baby Yoda,” particularly precious cargo the titular bounty hunter is tasked with protecting against a legion of former comrades in arms.

Gravity Falls A true mystery box of a kids’ series, Gravity Falls arrived now eight years ago on Disney Channel with little introduction. And across its 40 episodes—initially about the misadventures of 12-year-old twins shipped off to live with their eccentric great-uncle in a haunted Oregon outpost—it gradually revealed itself to be a much richer, smarter, more narratively purposeful tale of hidden worlds and fractured families than anyone could have guessed.

X-Men: The Animated Series Yes, the animation’s somewhat dated, but this ’90s cartoon laid the groundwork for many a serialized small-screen series to come with its uncommonly ambitious storytelling and nuanced treatment of the titular super-team. From season one’s epic saga surrounding the deadly Sentinels program to season two’s deepening of the dynamic between Wolverine and Rogue, X-Men: The Animated Series was one of the first comic-book shows to balance complex story lines with a fully fleshed-out, emotional approach to its characters. And its later-season staging of the Dark Phoenix saga, through which Jean Grey’s cosmic powers began to consume her, stands as the best telling of that arc to date, despite two separate efforts to dramatize it on the big screen.

Narrated by Natalie Portman, Disneynature’s “Dolphin Reef” tells the story of Echo, a young Pacific bottlenose dolphin who seems far more interested in exploring the coral reef and its intriguing inhabitants than learning to survive in it.
Courtesy of Disney+

Onward (April 3) Pixar’s latest opened mere weeks before the spread of the coronavirus led major theater chains across the country to close their doors. Set in a suburban fantasy world where elves and centaurs drive decal-decked vans and slack their way through high school, it may be a slighter entry from the studio that brought you Up and The Incredibles. But even middle-shelf Pixar still has magic to spare.

Dolphin Reef (April 3) Natalie Portman narrates this stunning Disneynature documentary about Echo, a young Pacific bottlenose dolphin filled with curiosity about the coral reef his pod calls home. Exploring his surroundings and bumping up against all manner of sea critters, Echo gradually learns his place in the delicately balanced ecosystem of the reef.

National Treasure (April 30) Nicolas Cage heads up a ragtag team of self-described “treasure protectors” in this 2004 adventure gem, in which the epically named Benjamin Gates (Cage) leads the FBI on a merry chase through American history after, yes, stealing the Declaration of Independence (but only because the bad guys were already going to, see!). One of the more endearingly odd highlights of Cage’s filmography, made at the unlikely peak of his time as a Hollywood leading man, it has aged like fine wine and buried riches. (And if you can’t wait till the end of April, it’s on Netflix until it shifts to Disney+).

—What to watch on Amazon Prime while social distancing during the coronavirus pandemic
—What to watch on Netflix while social distancing during the coronavirus pandemic
—For Jesse Eisenberg, WWII biopic Resistance and sci-fi nightmare Vivarium both hit close to home
—Sobriety is the new black: How musicians are upending the usual narrative surrounding addiction
—MusiCares’s COVID-19 Relief Fund gets all-star help for donations, concerts
Follow Fortune on Flipboard to stay up-to-date on the latest news and analysis.