Can’t afford to buy an apartment? This startup wants to sell you a share of one 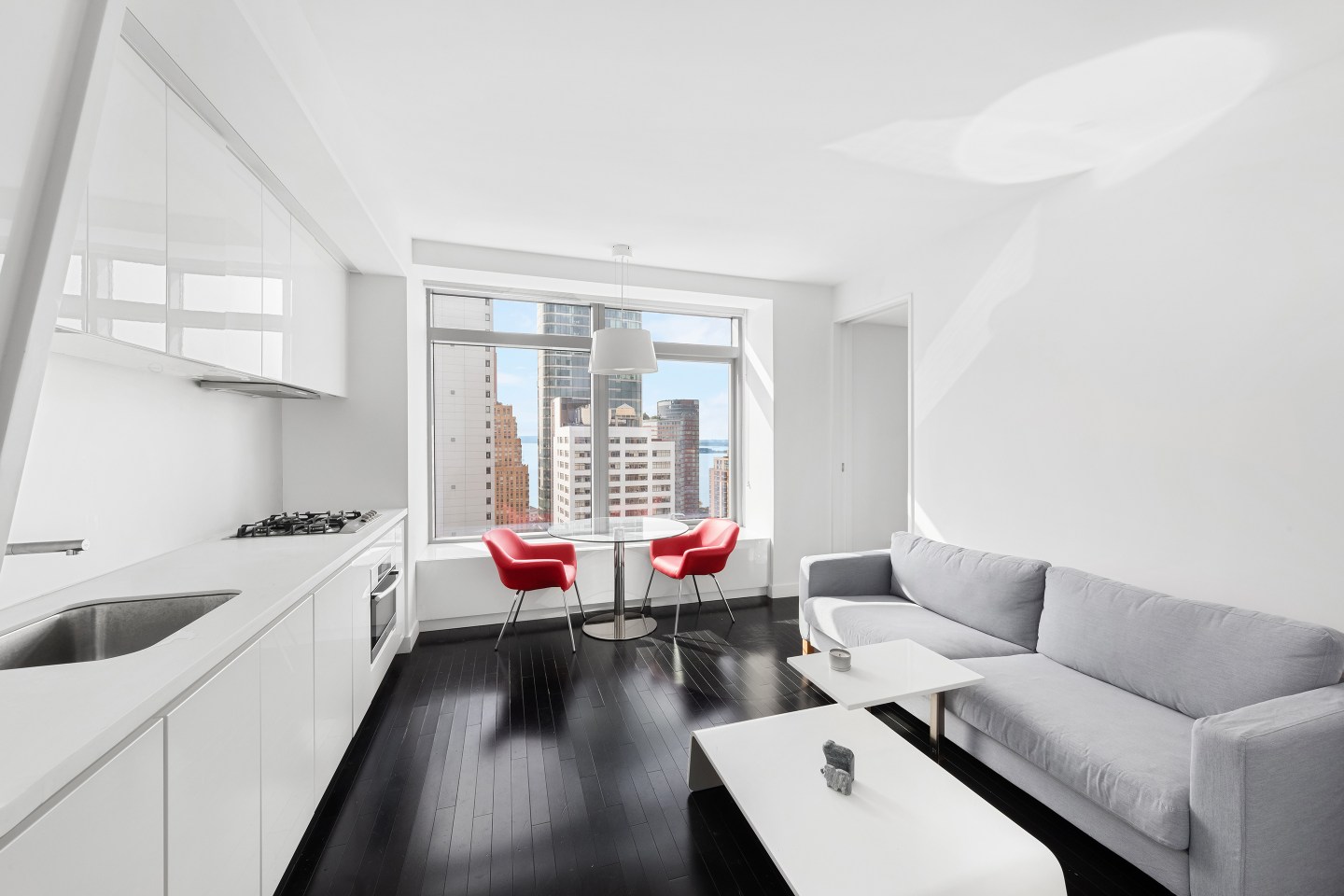 A residence in New York City that an investor can buy a fraction of the property.
Courtesy of Compound

Most New York City dwellers would joke that there’s no way they could afford an entire apartment in the city—perhaps just a fraction of one. Now there’s a company that wants to sell them just that.

Its founder, Janine Yorio, has a hell of a pitch. “I was born to start this company,” she told me from the boarding area of the Fort Lauderdale airport last month, before COVID-19 ground travel to a halt.

Her father worked as a software engineer and her mother as an architect. Yorio’s vision is some kind of meeting point between the two, further defined by her 20-year career in real estate. A couple years back, she wondered if there was a way to get more people on the “ownership ladder”—something that eludes many debt-ridden millennials and Gen Zers, particularly those looking to live in big cities.

“The average price of a condo in Manhattan today is $2 million. So what’s the best, most expeditious path to get on the ownership ladder? You have to start saving for a down payment somehow. How do you make sure the market doesn’t run away from you?” said Yorio. “You participate in the market so that your investment is appreciating at the exact same rate as the market.”

Screenshots of the Compound app, displaying share prices for a Miami home.
Courtesy of Compound

It works like this: The app enables investors to buy a minimum of 10 shares—for typically between $5 and $20 a share—of a specific property. Investors’ money will sit with Compound, accruing returns based on housing market performance, for three to five years. The company will take care of finding tenants and managing the property on owners’ behalf. The end goal, according to Yorio, is to accrue a return big enough to invest in something big—like, say, a home of one’s own. Recently, REITs (real estate investment trusts) have yielded 10.5% annual returns.

Compound and other “proptech” (property tech) platforms come at a time when would-be millennial homebuyers are getting shut out of the housing market. Gen Zers are off to a better start, it seems; they’re projected to overtake millennial homebuyers, partially because they’re more willing to live in cheaper cities. In this, Compound seems to appeal to a slightly older crowd, launching first with medium- to high-end condos in pricey cities such as New York City, San Francisco, Miami, Nashville, and Austin.

But what about its actual value proposition?

First, fractional ownership of real estate assets for investment purposes is not new, said Nils Kok, an economist and associate professor of finance and real estate at Maastricht University, in the Netherlands. In fact, REITs have been around for several decades.

“A conventional REIT is publicly traded, so I can buy and sell shares today,” Kok explained. “I don’t buy into a single asset, but instead I buy into a portfolio of assets.” Private REITs exist, but are usually sold to institutional investors and often require large minimum investments. Compound offers the option to buy into a specific asset, which is one of the ways it differentiates itself. However, it still relies on a REIT structure, without the liquidity of investors being able to instantly sell if necessary. (Right now, investors would have to personally find an interested buyer for their shares if they wanted to exit early.)

There are benefits to investing in a REIT. Sonia Gilbukh, an economist and assistant professor of real estate at CUNY Baruch College, noted that dividend-paying REITs do not pay corporate taxes. Returns on other types of investments are normally taxed as income on both the corporate side and on the investor’s side. “The gains are double-taxed,” explained Gilbukh, which ultimately eats into an investor’s take-home. Capital gains made on dividend-paying REITs, meanwhile, are only taxed once, on the investor’s side—which makes them a very popular investing option.

They may grow still more popular as investors, shaken by the COVID-19 market crash, look for safe places to store their money. REITs are widely considered to be one of the “safest” asset classes, even in a downturn, though property values do tend to rise and fall with the economy, and most economists are currently predicting a recession in the U.S.

When asked to look at Compound’s app-driven micro-investing platform, Gilbukh said almost anything that gets young people participating in the market is a good thing in a capitalist economy. Still, she wondered how much of Compound was a novel approach, and how much was the veneer of marketing; to her, the offering seemed like a REIT in new clothing. “That doesn’t mean there’s nothing there; marketing is so much [about] attracting customers. But I just don’t think they’re going to reshape how this market works,” she said.

One of Compound’s main differentiations—the ability to “choose” a specific property to sink money into—might give an investor a sense of control they don’t have with a REIT portfolio, Gilbukh continued, but at the end of the day investors are still picking from options the company presents to them.

And as for the idea that a real estate investment can help a wannabe homeowner gather enough cash for a down payment? “You could think that about any investment,” said Gilbukh.

Then there’s the other side of real estate investing: speculation.

Speculation in today’s market has shifted from house flipping, to people snapping up new condos to use for short-term vacation rentals. The consequences of speculation include rental-housing shortages, rent inflation, and an increase in no-fault evictions.

Andy Yan, an urban planner and the director of the City Program at British Columbia’s Simon Fraser University, has seen firsthand what speculation can do to a city. It took major taxes on speculation and empty homes to dampen the insanely hot condo boom in his hometown of Vancouver, which is now the second most unaffordable city in the world because of a rabid real-estate feeding frenzy.

“Residential real estate used to be a dowdy, boring type of investment that you bought, and you generally lived in,” said Yan. Not anymore. Short-term rental companies like Airbnb helped push the idea of a home as a lucrative, return-generating asset, leading to a crush in speculation that has destabilized housing prices for owners and renters.

That’s a major concern, considering there are now more renters than homeowners in 42 of the U.S.’s 100 largest cities. According to 2018 figures, 36% of Americans rent—and despite notable increases in the number of high-income renters, the majority of non-owners struggle with affordability.

Leilani Farha, the UN’s special rapporteur on the right to housing, said it’s important to remember that real estate investors make money from rising rents and prices. “Good returns on investments in residential real estate–particularly rental accommodation—requires that rents be raised each year,” she said in an email to Fortune.

Farha posited the larger ethical question triggered by enabling consumers to instantly purchase shares in something as consequential as housing. “When residential real estate is treated as a commodity…investors expect a solid return on investment in a short period of time,” she said. “We need to undo, not reinforce, the idea that housing is a desirable asset class. Gold is a commodity. Housing is not. It’s a human right.” She suggested investment platforms could help the housing situation by supporting construction projects that have genuinely affordable units.

But Compound CEO Yorio is a capitalist at heart. “Look, we’re not going to solve homelessness with this,” she admitted. Still, she maintains that Compound will allow people of more modest means to make money off the real estate market, which, for better or worse, is still generating generous dividends.

Yorio said the core of Compound is bringing “ownership to people who historically have not been able to get on the ownership ladder.” Whether it gets those investors into a home they can actually live in—or leaves them with just a fraction of one—remains an open question.

—Why the extraordinary dollar surge spells more trouble for the global economy
—These estimates of how much COVID-19 will hurt the economy are terrifying
—The NYSE is closed because of the coronavirus. What that means for investors
—How thinking like a golfer can help you ride out market mayhem
—Listen to Leadership Next, a Fortune podcast examining the evolving role of CEOs
—WATCH: The U.S. tax deadline was pushed from April 15 to July 15