The next Great Recession has already begun 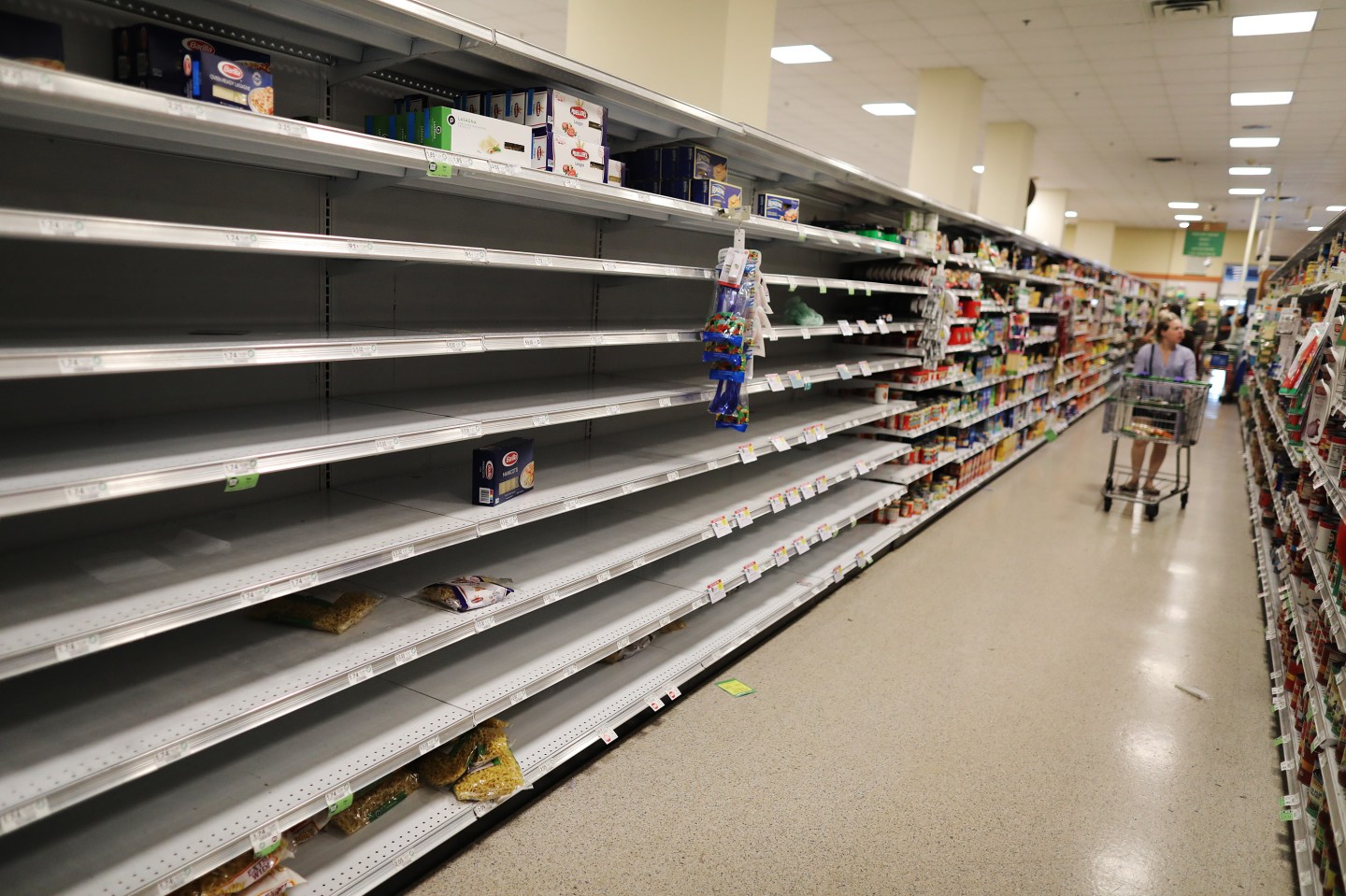 MIAMI, FL - MARCH 14: The pasta shelf is nearly empty in a store as people stock up during the coronavirus crisis on March 14, 2020 in Miami, Florida. Stores around the country have seen a run on essentials as people react to the COVID-19 pandemic. (Photo by Joe Raedle/Getty Images)
Joe Raedle—Getty Images

Remember the 2008 financial crisis? Well, the next Great Recession began this past week, as the U.S. virtually shut down its economy to prevent further spread of COVID-19.

First, the NBA suspended its season, followed in rapid succession by the NHL, the MLS, the MLB, and most recently, the PGA’s cancellation of the 2020 Masters golf tournament. Then Broadway closed down, followed by cancellations at nearly all major venues. Businesses told their employees to work from home. In Minneapolis, the normally-packed Mall of America parking garages are virtually empty. In New York City, Mayor Bill de Blasio just limited all restaurants, cafes, and bars, to takeout and delivery.

President Donald Trump’s Friday declaration of a national emergency seemed almost anti-climactic. Meanwhile, stock exchanges have been indicating a coming recession for two weeks, as stock prices have gyrated wildly, falling 20% until a partial recovery on the heels of the President’s announcement, according to analysis of data for the Dow Jones Industrial Average on Yahoo Finance. After the Federal Reserve’s emergency cut on Tuesday of 50 basis points, or half a percentage point, of interest rates failed to stem declining equity prices, the Fed followed with another cut on Sunday evening. This time it lowered rates to 0% (an additional 100 basis points), alongside pumping $700 billion of liquidity into the economy. In spite of those dramatic moves, the stock market plunged further on Monday as investors questioned whether further rate cuts will stimulate people to buy new homes or automobiles, or companies to increase their capital spending. Who would possibly be signing off on new capital investments right now?

Policy makers should accept the reality that the best way to make this a short, sharp recession is to focus entirely on stopping the spread of COVID-19. The U.S. federal government should ask Americans to voluntarily quarantine themselves in their homes until the peak infection period passes, as many states have already done. This would cause the spread of the disease to end faster and therefore allow a normal resumption of economic activity to occur sooner. This requires a containment strategy wherein most Americans, except essential workers, self-quarantine in their homes. Such a decision will result in major reductions in the U.S. consumer economy, except for online purchases and essential food and pharmaceuticals, but it may prove to be the fastest way to get through the recession.

A V-shaped recession would indicate a sharp downturn for the next several months, followed by rapid growth in early 2021. In this case, the economy would follow a pattern similar to the early 1950s, when the American economy dipped down for 12 months, followed by 12 months of recovery. If the U.S. gets coronavirus under control through swift containment measures, then that offers the greatest probability of a V-shaped economic rebound in 2021.

The Great Recession that started in 2008 followed an L-shape as it took nearly four years for recovery to pre-2008 levels. Drawing out the response to COVID-19 may simply increase the odds that the U.S. plunges into the much more severe L-shaped recession, which lasts a long time with only mediocre growth on the rebound.

Rather than trying to avoid a recession by keeping things running in a pseudo-normal manner and thereby accelerating the spread of coronavirus, the Trump administration should take the bitter medicine now of pushing for self-quarantines. In doing so, it may save the health of the American people and the American economy.

Bill George is senior fellow at Harvard Business School and former chair and CEO of Medtronic. He is also author of the book, Discover Your True North.

—Four lessons from the coronavirus
—Let’s remember what we learned in WWII, as well as in 2008
—Combating coronavirus starts with keeping health workers well
—Coronavirus may finally force businesses to adopt workplaces of the future
—Curing HIV and sickle cell falls short if the most vulnerable populations are left out