Why women in Mexico are planning a nation-wide strike 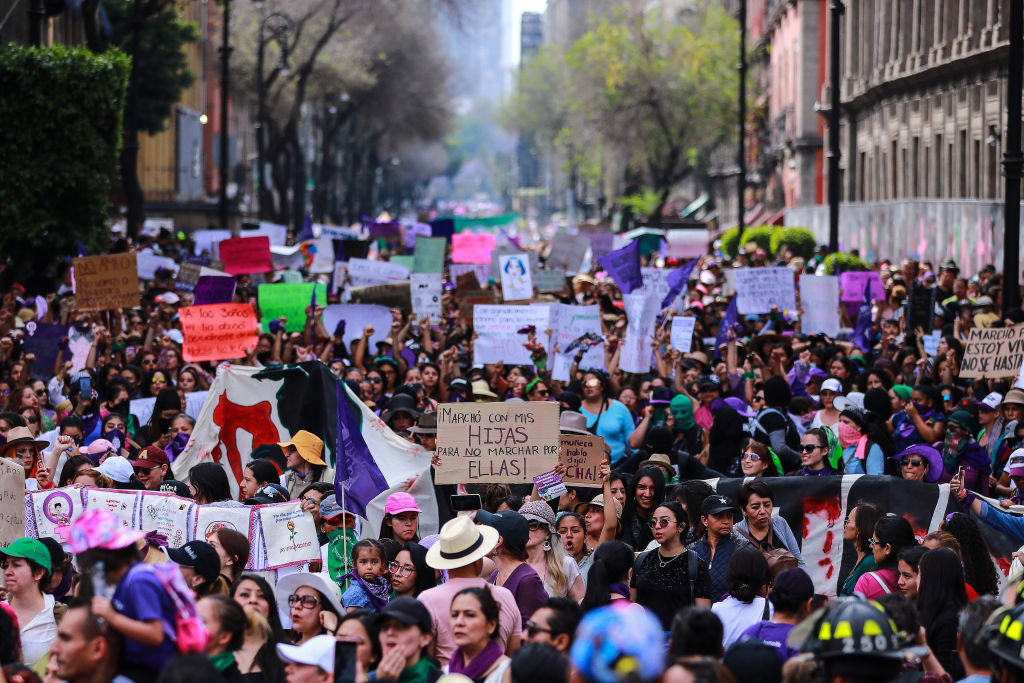 Good morning, Broadsheet readers! Elizabeth Warren flips the switch, we meet a doctor leading the anti-COVID charge, and women in Latin America have had enough. Have a meaningful Monday.

– IWD protests. As The Broadsheet mentioned on Friday, International Women’s Day has its roots in radical movements that saw female workers take to the streets to demand equity.

Women across the world channeled that spirit on IWD yesterday, as tens of thousands publicly demonstrated to press for more labor protections and greater rights.

Some public events were called off because of the coronavirus outbreak, but many went on despite counter-protests and police blockades.

Halting violence against women was the rallying cry of protesters in some Latin American countries, where femicide can be rampant.

In Chile, an estimated 150,000 protesters gathered in the capital of Santiago to call for abortion access and an end to gender-based violence. In Sao Paulo, Brazil, about a thousand women protested right-wing President Jair Bolsonaro as well as violence against women.

The alarming trend of violence against women in Mexico—10 were killed per day last year—is expected to prompt an all-out strike by women there today. The country has 21 million registered female workers and many of them are expected to stay home from work and school in protest. Big employers like Walmart are supporting the action by allowing their female workers to participate.

Overall violence has escalated in Mexico in recent years, but women, more so than men, are vulnerable to it in their own homes. Twenty-five percent of Mexico’s female homicide victims are killed in the home, compared with 10% of male victims, the Washington Post reports. Activists in Mexico also are dissatisfied with what they see as an insensitive response to the crisis from President Andrés Manuel López Obrador, who’s blamed past free-market policies for the uptick in femicide and has accused his political rivals of fueling today’s strike.

The strike could cost Mexico City alone some $300 million.

“We are a generation of women that has woken up,” a Santiago protestor named Valentina Navarro, 21, told Reuters. “We are not afraid to speak out and struggle.”

- Biden booster. California Senator and former presidential hopeful Kamala Harris endorsed Joe Biden for the Democratic nomination on Sunday despite being one of the former vice president's most vocal critics earlier in the primary contest. She said she would “do everything in my power″ to help elect him. Associated Press

- Warren's weekend. The Boston Globe has an inside look at the final days of Sen. Elizabeth Warren's campaign for the Democratic nomination, including a scene in which a reverend delivered a pre-debate rap-style prayer: "Look around see what you see: a lot of old boys who begin with a ‘B.’" Meanwhile, Warren poked fun at herself during a Saturday Night Live cameo, and she filmed an epic "Flip the Switch" video with Kate McKinnon, who impersonates Warren on SNL.

- IWD advice. To mark International Women's Day, Fortune asked 15 top business leaders to name the personality trait that they think has fueled their success. One answer: "A focus on effective communication—and it all starts with the ability to really listen," says Lockheed Martin CEO Marillyn Hewson. Fortune

- Coronavirus gender gap. Chinese researchers have again found that women are more likely to survive the coronavirus than men. But another study reveals a different kind of toll the epidemic is taking: researchers found that female doctors, nurses, clinical assistants and medical students in mainland China outside of Hubei Province, the outbreak epicenter, were more likely to report experiencing anxiety, depression or insomnia during the epidemic. South China Morning Post

MOVERS AND SHAKERS: Wells Fargo’s chairwoman, Elizabeth A. Duke, has resigned. She was expected to face tough questions from Congress this week about the bank's history of consumer abuses. HuffPost editor-in-chief Lydia Polgreen is leaving the website to become head of content at Gimlet Media, a podcast company.

- Doctor is in. Who is Dr. Deborah Birx, an appointee to President Donald Trump's new coronavirus task force? Birx holds the role of ambassador at the State Department for overseeing its global AIDS response; she's spent three decades researching H.I.V. and devising public health strategies to combat it. She's a holdover from the Obama administration, which speaks to her political savvy. “Thank God she’s in charge,” says Katy Talento, a former health policy advisor for Trump. New York Times

- Still behind bars. Saudi Arabia imprisoned a group of female activists in 2018 for campaigning for women's right to drive. Even after the kingdom granted women that right, the group remains detained; they're expected in court again this week. "I think that the best thing to do is to free all these people and to show that, yes, [Saudi Arabia is] changing. And we are freeing them because they didn't do anything wrong," says Lina al-Hathloul, who's sister Loujain is in jail. NPR

- The 'Sabrina Effect.' Women's college basketball is having something of a moment as attendance at games skyrockets at some schools. The trend can be traced, in part, to the popularity of Oregon phenom Sabrina Ionescu; her team now accounts for 58% of all basketball game attendance at the university. Other schools are reporting bumps too. Wall Street Journal

- Face of a movement. This piece profiles Piera Aiello, who was elected to the Italian Parliament in 2018. Aiello campaigned without showing her face—because as a Mafia informant in the 1990s, she lived under the witness protection program. Today, she lives under her own name, with a police escort, representing Sicily and fighting to protect others who speak out against the Mafia. New York Times

It’s among the world’s hardest sled runs. Why weren’t women allowed to use it? New York Times

A 1963 Klan bombing killed her sister and blinded her. Now she wants restitution Washington Post

"[W]e began to see the needle moving when we said that this is smart economics."