Politics with your coffee? These cafés are taking sides 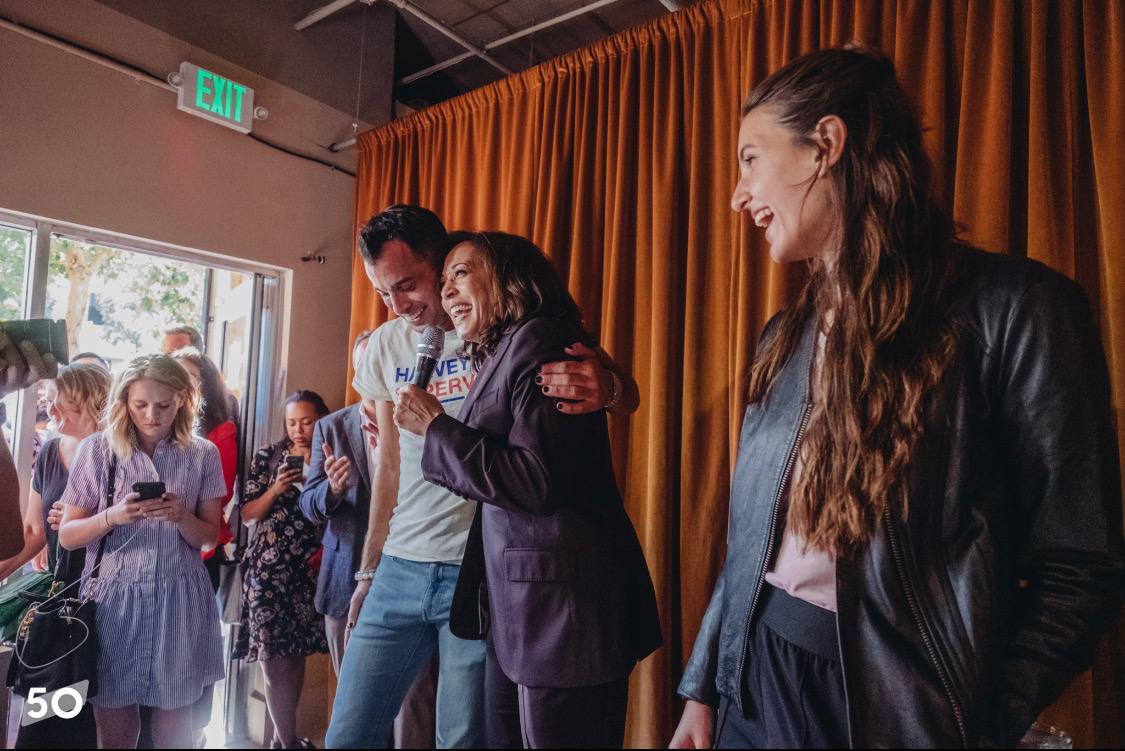 Kamala Harris visits Manny's in San Francisco for a pride fundraiser for her campaign in June 2019.
Photo courtesy of Manny's

These two spots and others around the U.S. have little in common except coffee-loving customers and a penchant for unapologetically partisan advocacy. For centuries, cafés in the U.S. and abroad have been gathering spots for political activists who engage in arguments that can get as heated as the caffeinated drinks poured in their cups.

At the new batch of java spots percolating around the country, however, patrons whose political opinions differ from those of the morning regulars should probably stick to talking about the weather to avoid a confrontation. Reflecting America’s increasing polarization, these cafés are either blue or red, even though the coffee poured is always black.

“I’ve tried to create a physical place where you can become a better informed and more involved citizen,” says Manny’s owner Manny Yekutiel. “Many people want to become civically engaged but don’t know where to go to start. Manny’s aims to be that place.” Thus the large “Election Countdown” LED sign above the café, which occupies a busy corner in San Francisco’s Mission District. The sign displays the number of days, hours, minutes, and seconds before the November election.

There is never an “elephant [Republican] in the room” on Manny’s event-room stage, where only Democrats give talks. Yekutiel acknowledges it’s a “partisan space because San Francisco is a partisan city”—nine percent of San Franciscans voted for Trump—but adds that everyone is welcome. Politically passionate café owners like him must walk a tightrope between supporting certain candidates and causes and the need to not alienate potential customers.

Yekutiel, 30, the son of an Afghan immigrant, was an Obama White House intern who worked for the 2012 Obama and 2016 Clinton campaigns before opening the café. His Democratic Party connections helped bring in the first few candidates; word of mouth did the rest. “I see this space as a campaign except that we’ll keep going from election to election,” he says.

Capacity crowds of up to 200 stand or sink into Manny’s coveted couches and futons at many events. An astounding 550 events—more than one a day—have drawn a total of more than 30,000 people since the café opened on Election Night 2018. They come for the candidate talks, debate watch parties, and author readings (political books are sold along with the mostly vegetarian menu items).

Manny’s would never make it in northwestern Arkansas, where Guns & Grounds has been a favorite of Second Amendment devotees since 2017. A Facebook post by the Bentonville shop reads: “Is your young one ready for the next step up in their firearm collection? We have a Crickett 22lr in the shop! Perfect for a range day with the children!” The February 2020 shop promotion was a raffle for a handgun with all “bazooka” (large) beverage purchasers eligible to win.

Another shop that peddles pistols while pouring Americanos is the Black Rifle Coffee Shop in Orem, Utah, in a county where Hillary Clinton took only 14% of the vote. The coffee counter, which opened in 2018, is in the bull’s-eye center of the Ready Gunner firearms shop. “We have a lot of people come in for everyday carry handguns,” says store/café manager Casey Currey. Others hit the adjacent shooting range. If the coffee doesn’t wake you up, the gunfire will.

No guns are sold at the Trumped Store & Coffee Shop in Show Low, Ariz., where a coffee-counter sign reads “Making Coffee Great Again.” But it sells everything from lattes and brownies to Trump T-shirts, talking pens, teddy bears, sweatpants, and shot glasses. Sales have doubled each year, says co-owner Steven Slaton, who believes it’s America’s only store to exclusively carry Trump-themed merchandise.

When Slaton ran the local Trump campaign out of the storefront in 2016, he couldn’t keep Trump items in stock, so he found local suppliers to keep pace with the demand. After the campaign ended, he just kept selling the “unofficial” merchandise, eventually adding coffee and food.

Merchandise for sale at Guns & Grounds.

The shop has been a lightning rod in the small mountain town even though most residents are white, low-income Republicans who tend to favor Trump. Threatening calls have come in, peaceful protests held, and the shop was vandalized. “We call the police just to harass the protesters,” says Slaton, “and after the break-in, we installed nine cameras.” Far from backing down, the store will host a Second Amendment rally on Memorial Day weekend featuring local Trump-supporting politicians.

The MAGA hats that sell like hotcakes at the Trumped Store are rarely seen inside any of the nine Blue State Coffee locations in New England. Since the first shop (slogan: “Beans to an End”) opened in 2004, enough Fair Trade organic coffee and locally sourced salads have been sold that Blue State has donated more than $1 million to nonprofits including the progressive groups ActBlue and People for the American Way.

On the opposite coast, Resistencia Coffee (slogan: “Coffee for the People”) opened in June 2018 in Seattle’s South Park neighborhood. “It’s a neighborhood of immigrants who have a history of resistance, so combined with the resistance to Trump, the name [‘Resistance’ in English] was a good fit,” says Coté Soerens, the Chilean immigrant who founded the shop. Voter registration drives are hosted there.

“So much of civic life has eroded and moved online, which is a terrible forum for dialogue,” says Soerens. “So we created a space for people to talk face-to-face. People of all kinds feel like it’s their space now. Even Trump supporters come in. We try to stay above the fray.”

Most coffee shops do stay above the fray—even the “partisan” shops—or at least they try. Says Michael Grant, owner of the Black Cow Coffee shops in Croton and Pleasantville, N.Y.: “On Postcard Tuesdays, when customers write to politicians at the center table in Croton, the postcards are addressed to both Democrats and Republicans. We invite everyone to get involved, Trumpers and never-Trumpers alike. But we discourage the bigger state and federal candidates from soliciting votes at the shops because they usually have entourages and can get pretty obnoxious.”

Maybe they should stick to decaf.

—Are we undergoing an industrial revolution or a phase change?
—Twitter’s testing new ways to fight misinformation. Is open-source the answer?
—Meet Trump’s Giuliani-approved power broker—and Melania’s new senior adviser
—Angela Merkel is on her way out. Meet her potential replacements
—How the 2020 election could influence your personal finances