Charleston Restaurant is the most relaxed formal dining experience in Baltimore 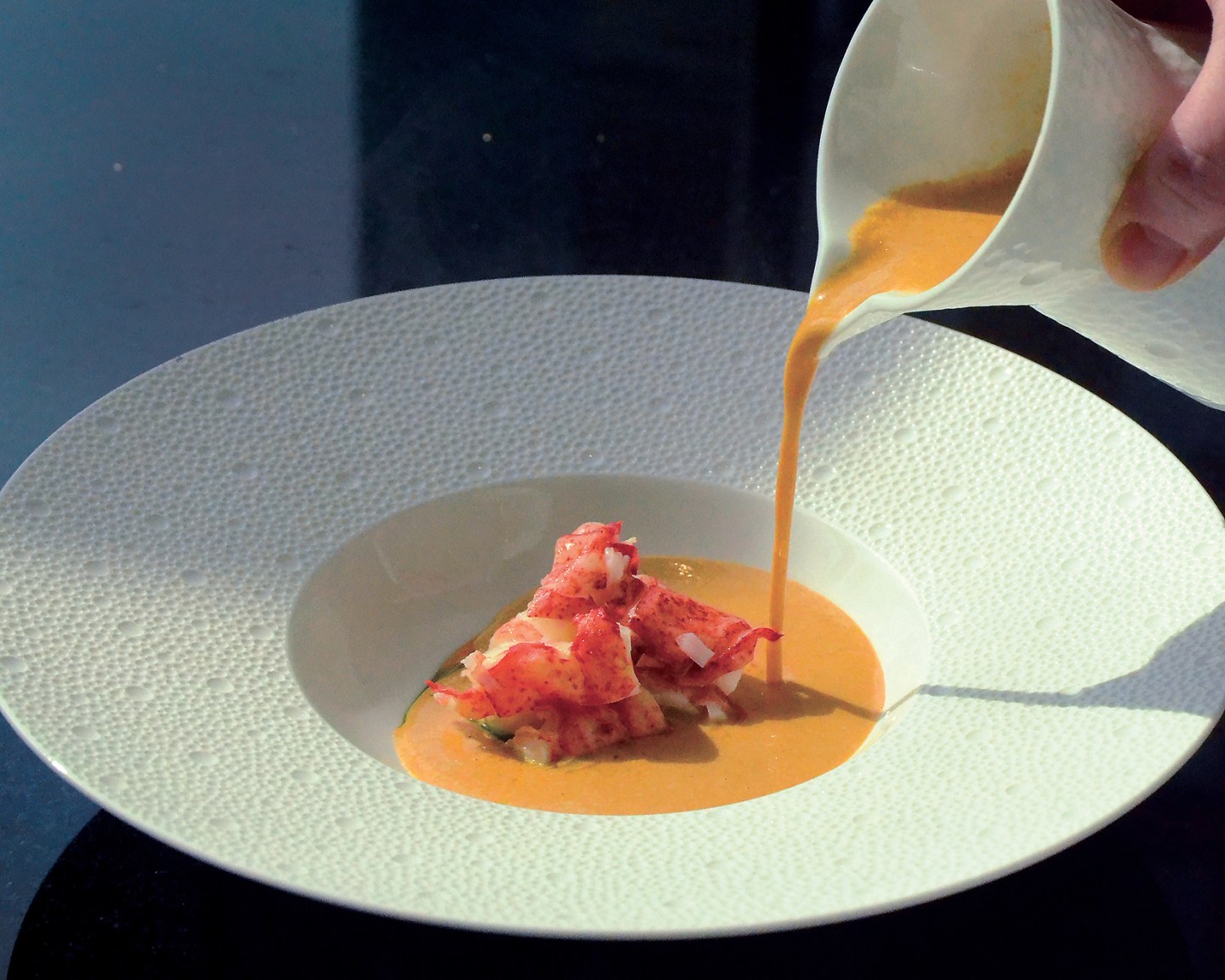 At the end of this month, Cindy Wolf will learn if she’s a nominee for the James Beard Best Chef: Mid-Atlantic award, an honor for which she’s been nominated for six consecutive years but has never won. It seems like a long time to wait, but it’s all relative for Wolf, who’s been at the helm of her restaurant, Charleston, the well-mannered bastion of fine dining in Baltimore’s Harbor East, since Titanic was tops at the box office.

Wolf has called herself the Susan Lucci of the Beards, self-deprecating but also a comment on her, and Charleston’s, staying power. “Neither Tony [Foreman, her business partner] nor I care about a trend,” says Wolf. “We do what we think is the right thing for us and our guests.”

Charleston may be allergic to fads, but if you keep doing the same thing long enough, fashions eventually circle back to you. Which is how the 23-year-old restaurant finds itself at the headwinds of a major industry shift. Since late 2016—I mark the era with the opening of New York’s Le Coucou—restaurants across the country have resumed interest in fine dining and continental cuisine, resurrecting tableside service, pulling white tablecloths out of storage, and feeding millennials prime rib and poached pears as if they were their grandparents out for a night in the city after the war. To wit: While you might expect boomers on business dinners to populate Charleston’s dining room (I did), more than three-quarters of the diners the night I was there appeared to be younger than 40. There are definitely hipper places to dine in Baltimore—natural-wine bar Le Comptoir du Vin and mezcal specialist Clavel come to mind—but the gospel in Charm City still seems to be, If you want a nice night out, you go to Charleston.

The Palm Room for private dining.
Will Napier

Outside Charleston’s clubby bar, where you can order à la carte, Wolf only offers a tasting menu. You choose three courses ($79) to six courses ($124) from a menu of 30 or so dishes that weave together the chef’s affinities from the American Low Country and France, to which she takes field trips at least once a year. The fondness reveals itself in butter sauces and enriched breads, truffles, game, and offal. The first bite to land on my table was an amuse-bouche of onion soup kissed with Madeira, pureed, and capped with a flaky snail shell of puff pastry wound around goat cheese.

Foreman and sommelier Lindsay Willey plan the pairings. One of them may be in the dining room to explain why the lobster soup has been matched with González Byass 30-year amontillado sherry, for example, but neither were present during my dinner—a disappointment since half the fun of a paired menu is learning the intricacies of how wine and food interact. The match was nonetheless spot-on, the sherry’s whiplash acidity and caramelized-walnut flavor balancing the soup’s profound umami. A pink island of butter-poached lobster rose in the center of the puree, tender and sweet but interrupted by a stowaway piece of shell.

Wedges of artichoke heart wore crisp tempura jackets and came with perky basil-lime mayo for dipping and a fat-cutting pour of an Austrian Sauvignon Blanc with notes of pineapple. Chewy on the trunks and crispy around the caps, trumpet mushrooms dovetailed with mellow white truffle powder in a nest of house-made fettuccine so gold the pasta appeared to be made with saffron instead of just eggs. Foreman and Willey tethered it to a lighthearted Massolino Barbera that conjured roasted plum tarts.

Familiar and cleanly executed, these dishes soothe rather than excite. Others might just put you to sleep, like an under-seasoned grilled medallion of venison leg with mashed sweet potatoes and rum-and-cider reduction that tasted like neither. Still others might confound, like the seared foie gras dropped in a lemon-and-artichoke broth. The foie was stringy as a harp and came with a laminated truffle brioche twisted up like a morning bun, but no explanation of how to eat them together. I unwound the pastry and tucked bits of liver into the folds—foie in a blanket? Wolf later explained the bread was for soaking up the broth, but its crisp, flaky exterior repelled rather than absorbed liquid. You can re-create this experience at home by serving a bowl of chicken noodle soup with a croissant.

One upside to the foie was my favorite wine of the pairing: a natural Galician Grenache-Carignan blend as cool and inky as walking barefoot on the beach at midnight. My favorite dish of the tasting, meanwhile, was a classic Wolf has been perfecting for decades: shrimp and grits. Ringed in a luminous beurre blanc, succulent twin Gulf prawns locked heads over creamy, perfectly cooked Anson Mills grits. (Before he became the ambassador of Low Country corn and grains, Glenn Roberts was the manager at the old Silk’s in Charleston, S.C., the restaurant where Wolf did her culinary internship.) A meticulous brunoise of andouille sausage and tasso ham covered the shrimp, whispering smoke and spice into each bite with a Cajun accent.

The cheese cart rolled over after the last savory course. It’s a Cadillac, all mahogany frame and silver hardware with a collection of wedges and wheels beneath the hemispheric plexiglass cover. My server went over each by heart, then sliced me off a piece of Nettle Meadow Kunik, a pungent cow-goat blend from the Adirondacks, plating it with thin crostini and nothing else. “I think fruits and marmalades take away from the cheese,” Wolf says. I prefer to desecrate mine with a little honey, but hey, Charleston is Cindy Wolf’s world, and we’re just living in it. She explains condiments are available on request, which probably should be written down on a menu somewhere so you know it is okay to ask.

The requisite cheese cart.
Will Napier

Throughout the night, Wolf zipped between the gleaming glassed-in kitchen and the dining room, touching both the tables of regulars and strangers like me. She radiates hospitality, a feeling the staff has learned to emulate. Front- and back-of-houses are notably diverse, as the Charleston way of rigorous training and promoting from within has helped counterbalance the barriers that exist to women and people of color in the restaurant industry. “We have the ability to give people opportunities,” Wolf says. “If you want to learn, I don’t care if you have any experience at all, I will teach you.”

When a young food runner fumbled over the ingredients in pastry chef Anne Blanchard’s refreshing dessert (crisp pink grapefruit sorbet, buttery strawberry sablé, lime cream), the senior server standing behind him didn’t swoop in or gape in horror. He let him power through the moment, whispering encouragements like a coach. “Thanks for your patience,” maître d’ Peter Keck said as he stopped by my table. “He just started training tonight.” At that moment, Keck could have rolled his eyes or grimaced or conveyed some other conscious or subconscious signal of contrition or distress. Instead he smiled, seeming proud of the trainee’s effort.

Wolf preparing for dinner service at Charleston.
Will Napier

This is top-down culture. Maybe that’s why employees tend to hang around Charleston’s hallowed halls. A full third of the staff has worked here for more than a decade, including Willey, who started as a server, Keck, and Everardo Florentino, Wolf’s chef de cuisine for the past 23 years. Maybe that’s why, according to a Baltimore magazine profile, when Wolf had cancer and lost her shock of platinum hair, her kitchen staff wore bandannas in solidarity as she worked all through treatment. Maybe that’s why, whether or not Wolf wins a Beard award, to her employees, she’s already a winner. And the feeling is mutual. “I’m delighted by the people that work for us,” she says. “And I’m thankful for every single one of them.”

—The most essential travel apps you need to know about
—One of Bordeaux’s most revered estates is launching a new high-end wine in Napa
—Inside a sleep and wellness hotel that rents out minimalist “cocoons”
—Behind the scenes of the Dalai Lama’s early history with the CIA
—WATCH: Can San Francisco Be Saved?