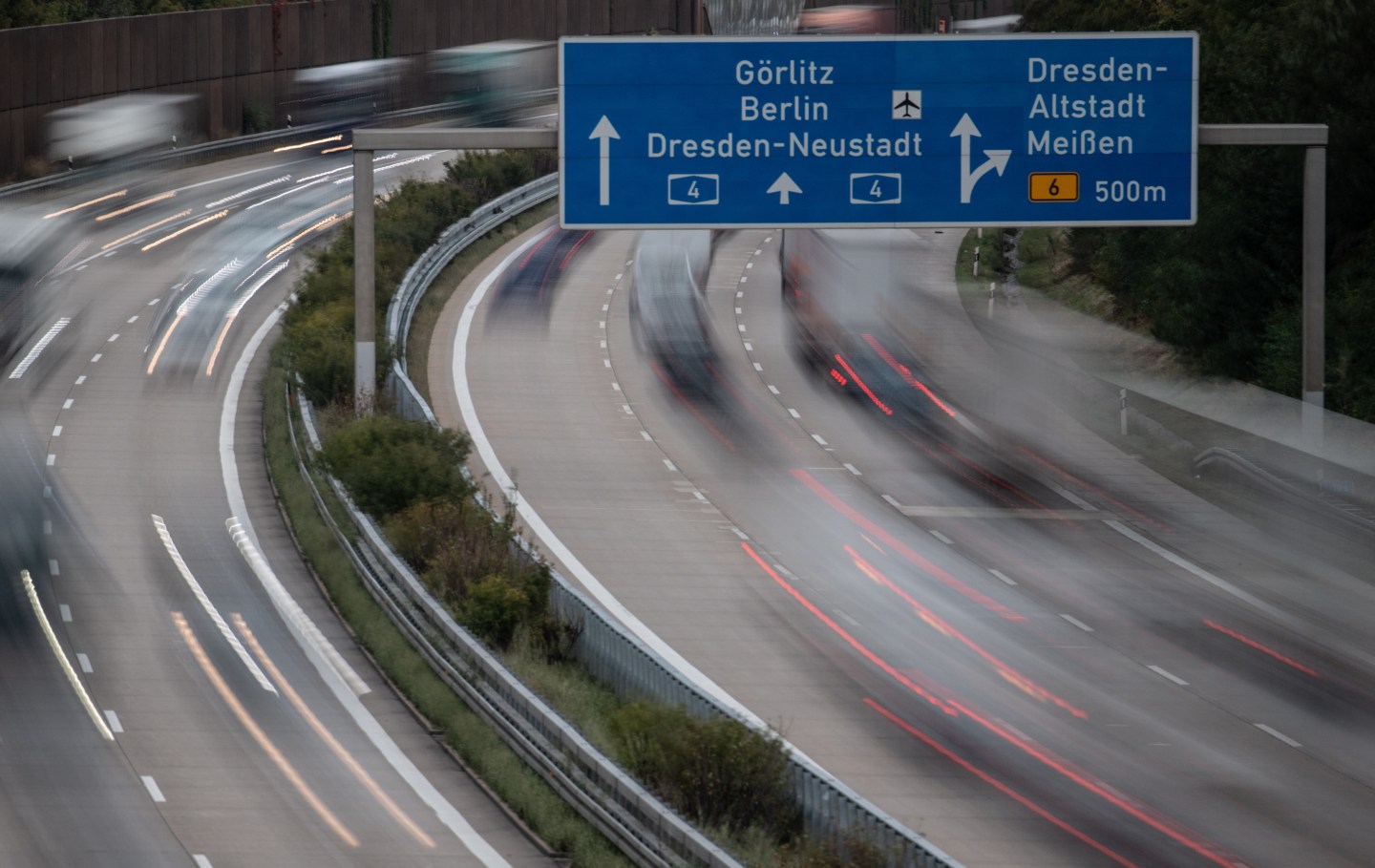 For decades, German lawmakers have debated and rejected imposing a “Tempolimit” on the beloved Autobahn system.

But now Germans’ deeply held right to drive fast is facing its biggest challenge in a generation, sparked by intensifying fears about the environmental and public safety impact of the country’s need-for-speed culture.

Today, a decisive clash seems inevitable, as the Green Party—which supports speed limits on environmental and safety grounds—rises in the run-up to the 2021 elections, and Germany’s storied automakers dig in their heels in opposition.

Germany’s upper house of Parliament last month voted down a 130 km/h (80 mph) speed limit, but that vote likely only offers a temporary stay. In addition to the Greens, which at roughly 20% in the polls, is now the second-most popular party in Germany, the new leadership of the Socialists (SPD), the junior governing partner with Chancellor Angela Merkel’s conservatives, has also taken up the cause.

The German public itself appears to be divided: according to polling company Infratest Dimap, slightly more than half of Germans are in favor of the 130 km/h highway speed limit, a level of support that has stayed relatively constant over the past few years.

But influential German carmakers, who churn out sporty automobiles like Audis, Mercedes, and BMWs, want no part of it, and they have a message for those who hope to finally place a speed limit on the country’s cherished motorways: Slow down.

Mercedes-Benz owner Daimler? “In general we consider it a good idea not to restrict customers, but offer products they want,” a spokesperson said. BMW is “only in favor of speed limits for high-risk sections of road, as long as speed limits are not instead of road expansion or renewal projects.” And Volkswagen dismissed the significance of the proposed changes. Even if a general speed limit were passed, the carmaker says, it “would have more of a symbolic character.”

Automakers in Germany hold significant political sway, particularly among conservatives and in places like Bavaria, BMW’s home region. The CSU, the Bavarian partner with Merkel’s CDU, has fought hard against speed restrictions, helping to defeat a Green Party-backed measure last year in the Bundestag. CSU Transport Minister Andreas Scheuer said at the time that an Autobahn speed limit “defies all common sense.”

Ultimately, Germany’s carmakers and their allies are content to keep producing speedy cars as long as Germans are buying them. “They know their clients. We love to go fast,” said Ulf Poschardt, the editor-in-chief of German newspaper Die Welt and an outspoken voice against a speed limit.

“Our main incentive is safety,” Oliver Krischer, a member of the Bundestag for the Greens and the party’s deputy parliamentary group leader, told me. “Traffic accidents with fatal casualties and injured may be cut in half through a speed limit.”

Though Germany is the only country in Europe without an official highway speed limit, about 30% of the 8,000-mile Autobahn network already has some sort of cap, in many cases due to curvy roads or high levels of traffic. These more treacherous stretches naturally see a higher number of accidents than less busy pedal-to-the-metal zones, a point that many pro-speeding enthusiasts like to cite.

Autobahn advocates also contend that Germany has the safest highways in the world, though new OECD data suggests that Germany doesn’t even rank highly in Europe. According to a recent calculation from Der Spiegel, a speed limit could prevent up to 140 deaths a year (government statistics pegged highway traffic deaths at 409 in 2017). Studies looking at local German states that have imposed speed limits also showed that they resulted in fewer accidents, injuries, and deaths.

Firefighters extinguish vehicles on Autobahn 5 near Karlsruhe after a rear-end collision between a truck and a car, on July 22, 2019.
Uli Deck—Picture Alliance via Getty Images

Environmentally, a speed limit would cause a slight reduction in German carbon emissions, and last year, Germany’s Federal Environment Agency called on the government to introduce the limit as part of a package of green changes. Car companies like Volkswagen, of course, would rather emphasize other kinds of efficiency measures, like digitizing traffic flow. “At Volkswagen, we focus on intelligent, sound solutions rather than bans,” the spokesperson said.

Krischer said that the Green Party nevertheless intends to highlight the issue heading into the next German federal election expected to be held between summer and fall 2021. “Few people truly enjoy driving in areas without a speed limit because cars frequently approach them [going] 180 km/h (112 mph) or more from behind,” he said.

The potential change has faced serious pushback. The speed limit conversation has long been a third rail in domestic politics and, culturally, it’s hard to overstate just how passionately many Germans cling to their turbo-charged freedoms.

The automobile has functioned as a core national symbol for generations (Karl Benz, a German engineer, is credited with inventing the first modern production car in 1885). The Autobahn itself holds a unique sentimental status: The motorway network, first constructed by the Nazi regime, expanded in the 1960s and came to represent Germany’s post-war economic boom.

“The Autobahn is just brilliant,” Die Welt editor-in-chief Poschardt said. “It is our Statue of Liberty. Don’t touch it.”

“The Autobahn is just brilliant,” says Die Welt editor-in-chief Ulf Poschardt. “It is our Statue of Liberty. Don’t touch it.”
Inga Kjer—Photothek/Getty Images

Nowadays, car-enthusiasts flock to Germany to drive on the Autobahn. Even the federal government recommends it as “one of the seven things you must do in Germany.”

“We don’t have something like drag racing in Germany, where you accelerate quickly and that’s fine. In Germany, it’s high speeds over long distances,” said Christopher Neumaier, a historian and professor at the Leibniz Centre for Contemporary History Potsdam.

Now, however, things are changing at the ADAC. A kind of hardcore version of US road-side assistance organization AAA, the ADAC walked back its anti-speed limit stance in January, saying that its members were more or less divided on the issue. The club is now “no longer fundamentally” against the general speed cap, its vice president for traffic told German news agency DPA.

The move marked a major shift for full-throttle car advocates in Germany. “Now that one of the big lobbying groups has disappeared, the interesting question is how the car industry will react,” Neumaier said.

For the time being, automakers refuse to change course. “We reject a general speed limit, as there are no convincing arguments for this. Rather, it is a symbol debate that has been activated time and again for years,” said a spokesperson for the Verband der Automobilindustrie, the German automaker trade group.

Poschardt predicts that the Greens and climate activists will ultimately win out, which he believes will take away much of the joy he derives from driving his Porsche. “The GT in my GT3RS stands for Greta Thunberg, and I hope she will realize that the speed on the Autobahn is not worth fighting against.” (Thunberg has not commented on the issue).

For outside observers and plenty of Germans alike, the lack of a speed limit is one of the more odd and potentially dangerous quirks of the country. The intensity it provokes also tends to draw a comparison to a similarly controversial American freedom.