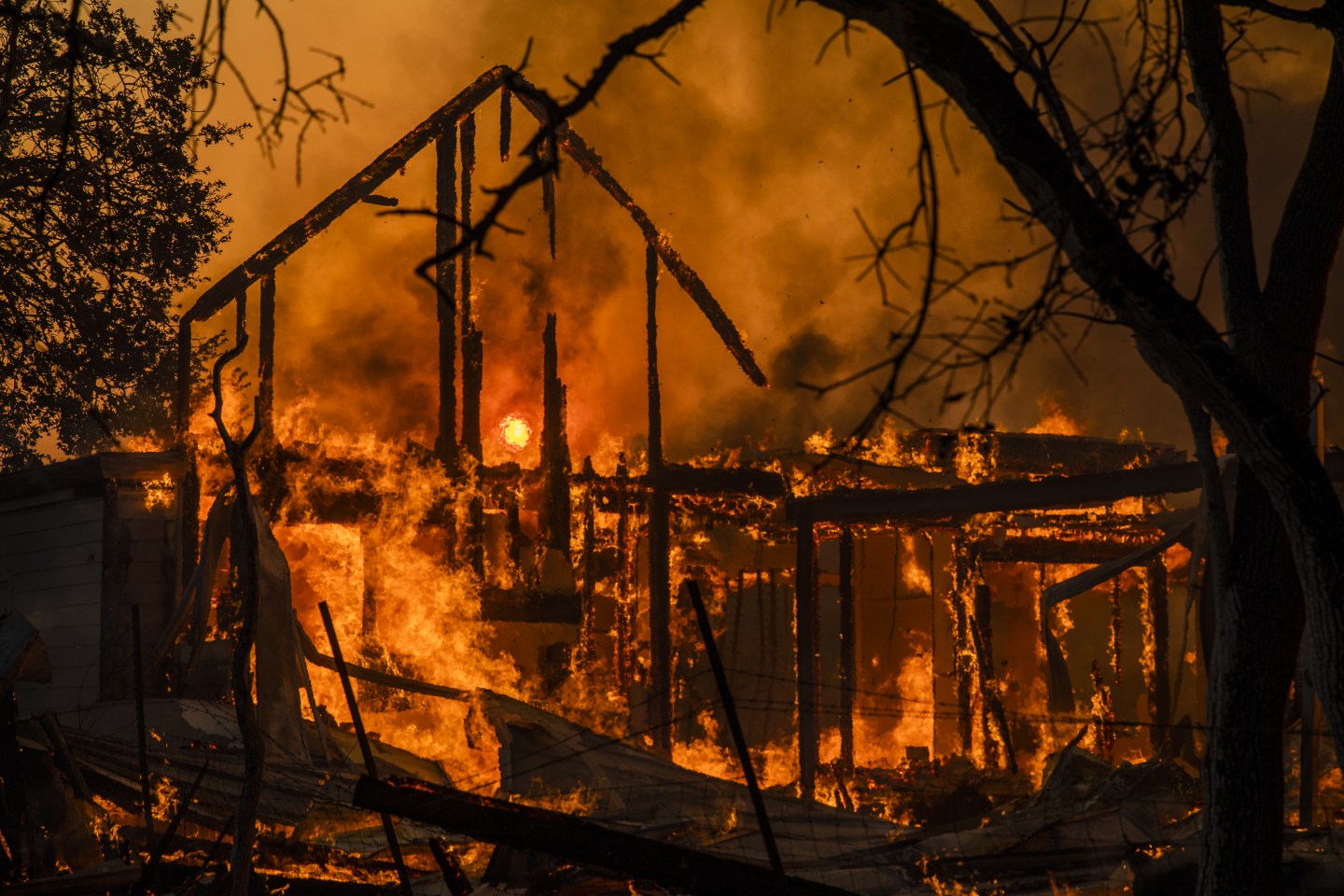 Flames engulf a home as it burns along Highway 128 during the Kincade fire in Healdsburg, California, U.S., on Sunday, Oct. 27, 2019. The wildfire that erupted in California's wine country minutes after a PG&E Corp. power line went down has prompted an expanded evacuation order, as officials warn high winds could drive the blaze toward one of the region's largest towns. Photographer: Phil Pacheco/Bloomberg via Getty Images
Phil Pacheco—Bloomberg/Getty Images

California power regulators on Thursday slapped Pacific Gas & Electric with a $2.1 billion fine for igniting a series of deadly wildfires that landed the beleaguered utility in bankruptcy.

The record penalty imposed in an administrative law judge’s decision boosts a previously agreed upon $1.7 billion settlement announced in December. Several consumer groups had protested the settlement as too lenient in light of PG&E’s destruction, and the California Public Utilities Commission agreed after further review.

PG&E officials said they were disappointed by the increased fine after “working diligently over many months with multiple parties” to reach the previous deal.

“We recognize our fundamental obligation is to operate our system safely and we share the same objectives as the Commission and other state leaders — namely in reducing the risk of future wildfires in our communities,” PG&E spokesman James Noonan said in a statement.

The San Francisco company has already set up a $13.5 billion fund to help those who lost family members, homes and businesses in catastrophic wildfires caused by PG&E’s outdated electrical grid and negligence during 2017 and 2018. The fires killed nearly 130 people and destroyed almost 28,000 homes and other buildings.

More than 81,000 claims have been filed in the bankruptcy case.

The decision will also prevent PG&E from attempting to recover $1.82 billion from its customers, forcing its shareholders to bear the cost instead. The settlement previously had prevented PG&E from recovering $1.63 billion.

As part of the previous settlement, PG&E had projected it would realize $469 million in tax savings. Thursday’s ruling could require the San Francisco company to funnel any tax savings to hold down the prices charged to the 16 million people who rely on the nation’s largest utility for electricity.

Thursday’s rebuke is the latest blow to PG&E, which has been trying to climb out of a huge financial hole left by its liabilities from the fires. The company filed for bankruptcy 13 months ago to seek shelter from more than $50 billion in claimed losses. It is seeking to emerge from bankruptcy by June 30 to qualify for a state wildfire insurance fund.

PG&E has settled those claims by reaching settlements totaling $25.5 billion with the wildfire victims, insurers and some government agencies.

But the company still faces some potentially imposing hurdles, with California Gov. Gavin Newsom threatening a government-led takeover bid if the utility doesn’t make significant reforms. PG&E needs state approval of the plan to qualify for the wildfire insurance fund.

—The Greek economy is roaring back—which could lead to mass evictions
—Trump budget cuts could become a big problem as coronavirus spreads
—Should consumers be wary of Apple’s heartbeat monitoring app?
—One of Bordeaux’s most revered estates is launching a new high-end wine in Napa
—5 reasons coronavirus statistics seem inconsistent