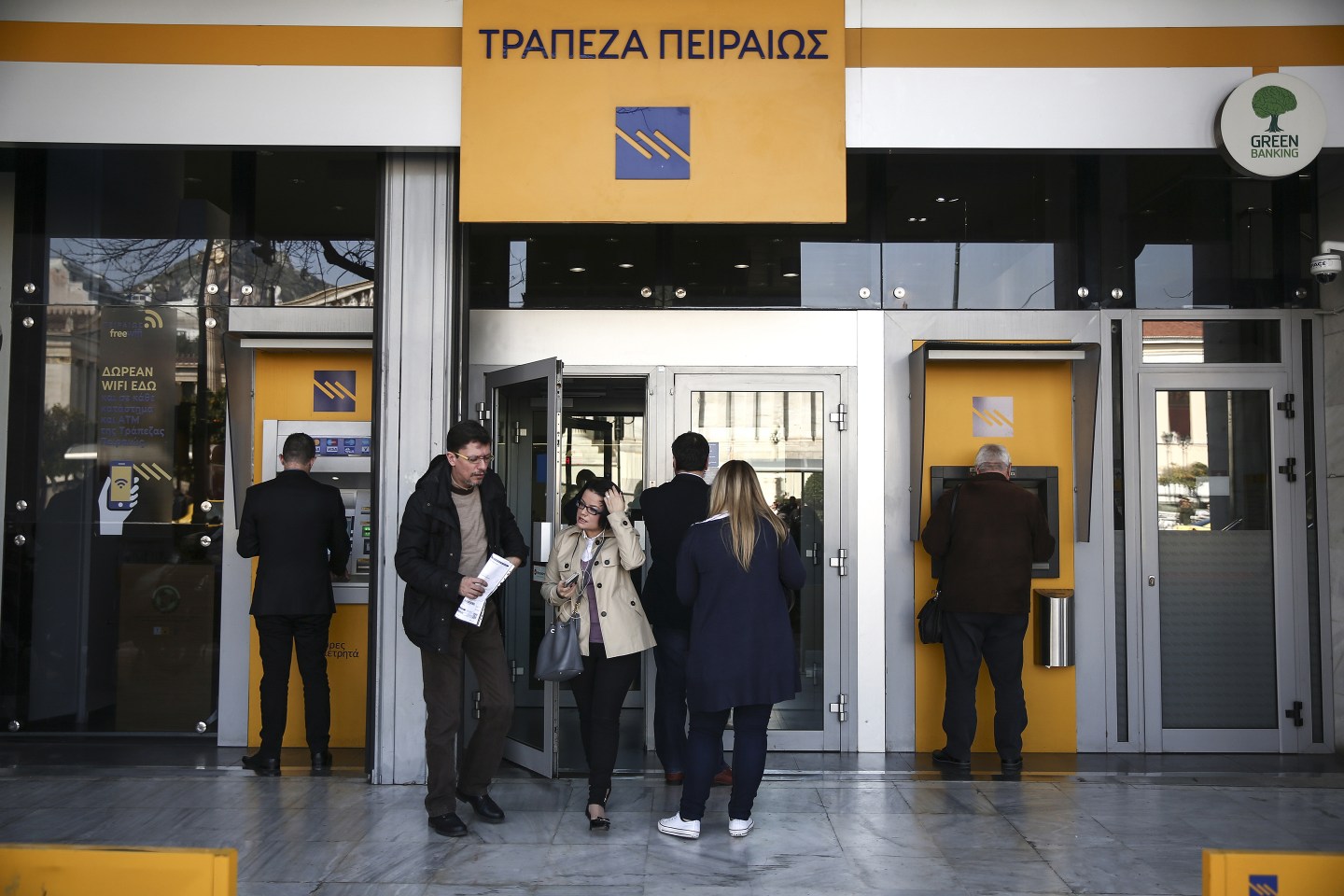 Former tavern owner Stella Kokkinou has been out of work for nearly six months. Last year, she closed her seafood restaurant in southern Athens as a combination of rising rent, growing competition and high taxes put her in the red. She’s managed to square off most of her debts, she says, apart from the money owed on her two-bedroom apartment.

Kokkinou acknowledges she is “severely” behind in her mortgage payments, and is resigned to the fact she’ll lose her home to the bank.

“At this age I thought I would be looking forward to retirement, not worrying about where I will live,” she said.

Kokkinou is one of an estimated 30,000 people in Greece at risk of ending up on the street this year due to unpaid bank debts. She will probably end up moving in with her 40-year-old daughter who lives across town, she says.

Currently, there are some 60,000 properties headed for sale on eauction.gr, the platform on which notaries hold the forced sales. About half of them relate to main residencies, industry officials say.

However, consumer rights group EKPIZO puts the number of people facing the risk of eviction in the coming years at “hundreds of thousands.”

In the years following the country’s bruising financial crisis, the Greek government did everything in its power to protect delinquent citizens from losing their homes—often against the wishes of many of its creditors. But as the economy improves and new politicians take office, those promises are proving harder to keep.

Greek lenders stand to gain the most. They’ve been trying to offload some 70 billion euros of toxic loans festering on their balance sheets since the start of the crisis ten years ago.

This amounts to nearly one in two loans held by Greece’s top four top banks—Piraeus Bank, National Bank of Greece (NBG), Eurobank and Alpha Bank. Credit rating agency Moody’s said that this is the highest ratio of nonperforming exposures (NPEs) in its global rating universe. The average in Europe stands at around 3 percent.

Under pressure from bank regulators, lenders have been busy selling bad debt to loan servicing companies, also referred to as funds.

30 billion euros ($32.5 billion) have already been passed on to loan servicing companies, such as Italy’s doValue and Australia’s Pepper, with the number expected to reach 70 billion euros by the end of the year. (To put that into context, Greece’s nominal GDP last year was 214 billion euros.)

Playing a key role in this shift in sour debt from bank balance sheets to funds is Greece’s new asset protection scheme, dubbed Hercules. Under the plan, state guarantees will be offered on securitized non-performing loans (NPLs) in a move that could help banks get rid of 32 billion euros of bad loans. Full details have yet to be finalized, but the scheme, based on Italy’s GACS plan, is widely expected to get off the ground soon.

Refinance, or lose your home

Funds have been snapping up secured loans for as low as 25 percent of their nominal value. They then call on loan holders to either pay back the money (under more favorable terms), or forfeit their home. Funds target a profit of some 15% on these sorts of deals, according to industry officials.

At this stage, seven in ten loan holders normally agree to a loan restructuring, while the others let the property go to auction.

Because of the cost associated with getting rid of these bad debts on their books, Greek banks have hit the bond markets to raise fresh capital—and the timing couldn’t be better.

Investor appetite for Greek stocks and bonds is at record highs in recent months on renewed confidence in the country, and a Europe-wide bond rally powered by European Central Bank stimulus and dirt-cheap interest rates.

Greek stocks closed 2019 as the best performers in the world, soaring by 43%. That rally was proceeding until this month. Year-to-date, stocks on the Athens bourse are down about 10%, hit by coronavirus outbreak fears.

An economic miracle in the making

But the macro picture looks remarkably strong. Against a backdrop of a slowing growth elsewhere, Greece is far from the weakling of Europe that was on the brink of bankruptcy just a few years ago. This year Greek is tipped to have one the best performing economies in the eurozone with a 2.4 percent growth rate, according to the European Commission.

A booming tourism industry is driving this strong economic performance along with a spike in direct foreign investment, which rose 9.1% in 2018 to 3.3 billion euros, advancing for a third straight year, according to Bank of Greece figures.

Yields on Greek government bonds, meanwhile, have plummeted to below 1%, meaning that investors pay more for U.S. Treasurys that 10-year Greek sovereign bonds.

But behind the impressive headlines, life is getting harder for those falling behind on loan payments.

By the end of April, Greek lawmakers are expected to introduce new insolvency laws. The legislation will close legal loopholes that allow those in default to protect their home through lengthy court proceedings, which can take up to four years.

Not only will the foreclosure procedure be sped up, but the bankruptcy rules will be broadened so that individuals can declare bankruptcy, rather than just businesses. The government sees these measures as a way to meet global standards.

“Protection for the main residence is being brought in line with EU directives on insolvency,” Fotis Kourmoussis, the Finance Ministry’s Special Secretary for Private Debt Management, told Fortune.

But while the new bankruptcy regime may close one loophole for Greece’s pro-investment government, it will likely open another in the form of greater risk Greeks lose their homes in payment disputes.

And, the threat of a political backlash against home auctions is posing a major headache for the ruling conservative New Democracy party. Last week, Finance Minister Christos Staikouras met with representatives from debt servicing companies in a bid to coax them into going easy on home auctions.

Supporters of home auctions point to one an anomaly of Greek personal finance, and one of the banking system’s biggest problems: strategic defaulters—those who are said to have the money to pay but refuse to do so.

As much as one in four bad loans are held by strategic defaulters, (more recent estimates from bank officials place the figure closer to 50 percent).

Greece has long suffered from a poor payment culture. This problem, however, got worse when the previous leftist Syriza government was elected in 2015 on a platform promising that “bankers will not get their hands on any homes.”  This sent a message to many to stop paying back loans. In September 2015, nearly 40% of home mortgages were in the red, versus 32.3 percent, two years earlier, Bank of Greece data shows.

Since then, Greece has decided to bite the bullet. Under enormous pressure from EU banking authorities, the New Democracy administration is giving a higher priority to lowering bad loans than to preventing home repossessions.

That process is gradually picking up pace. Last year, some 18,000 properties were put under the hammer, including holiday homes, business properties and vacant blocks of land. The number of main residences taken from owners numbered less than 10,000, industry officials estimate.

Greek officials point to the country’s unlikely economic turnaround as a sign everyday Greeks have the wherewithal to finally get on top of their finances.

“The payment culture has improved significantly in recent months,” a senior fund official told Fortune. “People have realized that the party is now over.”