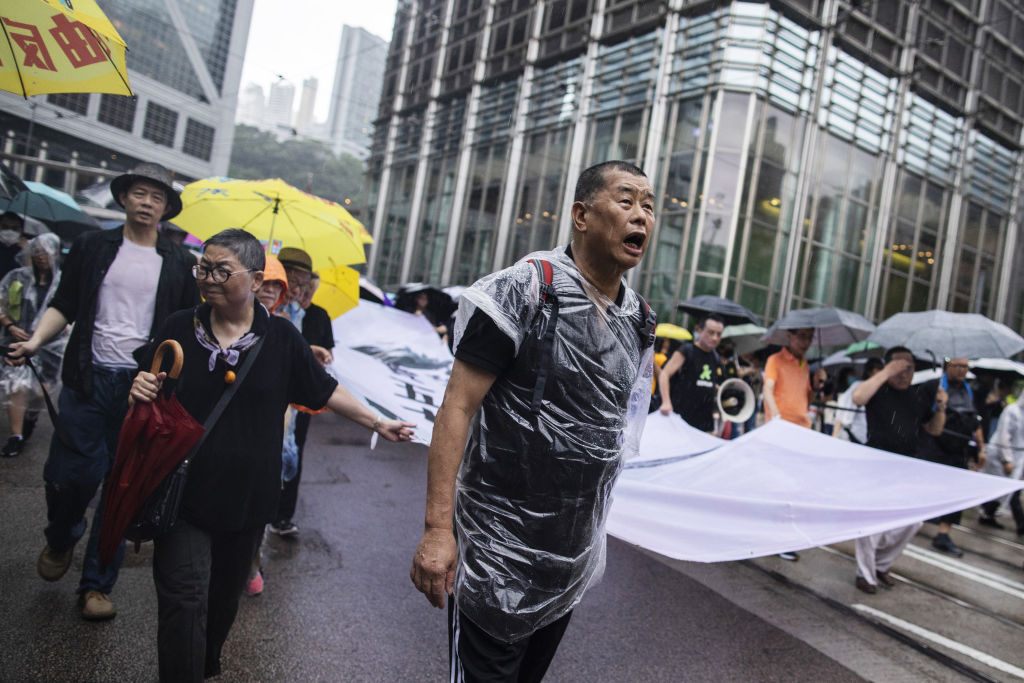 Jimmy Lai, chairman of Next Media Ltd., center, holds a banner as he marches along Queen's Road Central during a protest in the Central district of Hong Kong, China, on Sunday, Aug. 18, 2019. Tens of thousands of Hong Kong protesters defied a torrential downpour as they gathered in the centrally located Victoria Park for the weekends major rally, after two nights of demonstrations ended peacefully and without police firing tear gas. Photographer: Justin Chin/Bloomberg via Getty Images
Justin Chin—Bloomberg/Getty Images

Hong Kong media tycoon Jimmy Lai has been arrested on suspicion of participating in an unlawful assembly last year and intimidating a reporter in 2017.

The arrest was confirmed by Mark Simon, the group director for Lai’s company, Next Digital Ltd., which publishes the Apple Daily newspaper. Two former pro-democracy lawmakers and activists, Lee Cheuk-yan and Yeung Sum, were also arrested on suspicion of unlawful assembly Friday, he said.

“This is ridiculous,” Simon said by phone. Lai was being held in a police station in Kowloon and was waiting to see his lawyer, he said.

The Police Public Relations Branch didn’t immediately respond to a request for comment Friday. The moves were earlier reported by local media including Now TV and Cable TV.

The arrests come amid a lull in protest activity following more than six months of nearly non-stop demonstrations in the former British colony and as the city battles the outbreak of the deadly coronavirus. The Hong Kong police have been going through footage and trying to track down around 300 protesters and suspects, the South China Morning Post newspaper reported Jan 29.

Lai has long championed the city’s pro-democracy movement and has been labeled a traitor by the Chinese government.

Around 10 police officers arrived at Lai’s home in Ho Man Tin in Kowloon at around 7:30 a.m. Friday, according to local newspaper Oriental Daily News. He was arrested in relation to the criminal intimidation of the newspaper’s reporter in 2017 and for unlawful assembly on Aug. 31 last year, the Oriental Daily said, citing unidentified people.

The Oriental Daily had long sought to have Lai prosecuted over the 2017 incident, Simon said.

—Trump budget cuts could become a big problem as coronavirus spreads
—China cracking down on VPNs in coronavirus crisis
—China tries to restart economy as outbreak slows. Is it heading back to work too soon?
—5 reasons coronavirus statistics seem inconsistent
—Coronavirus may be the straw that breaks the back of oil fracking