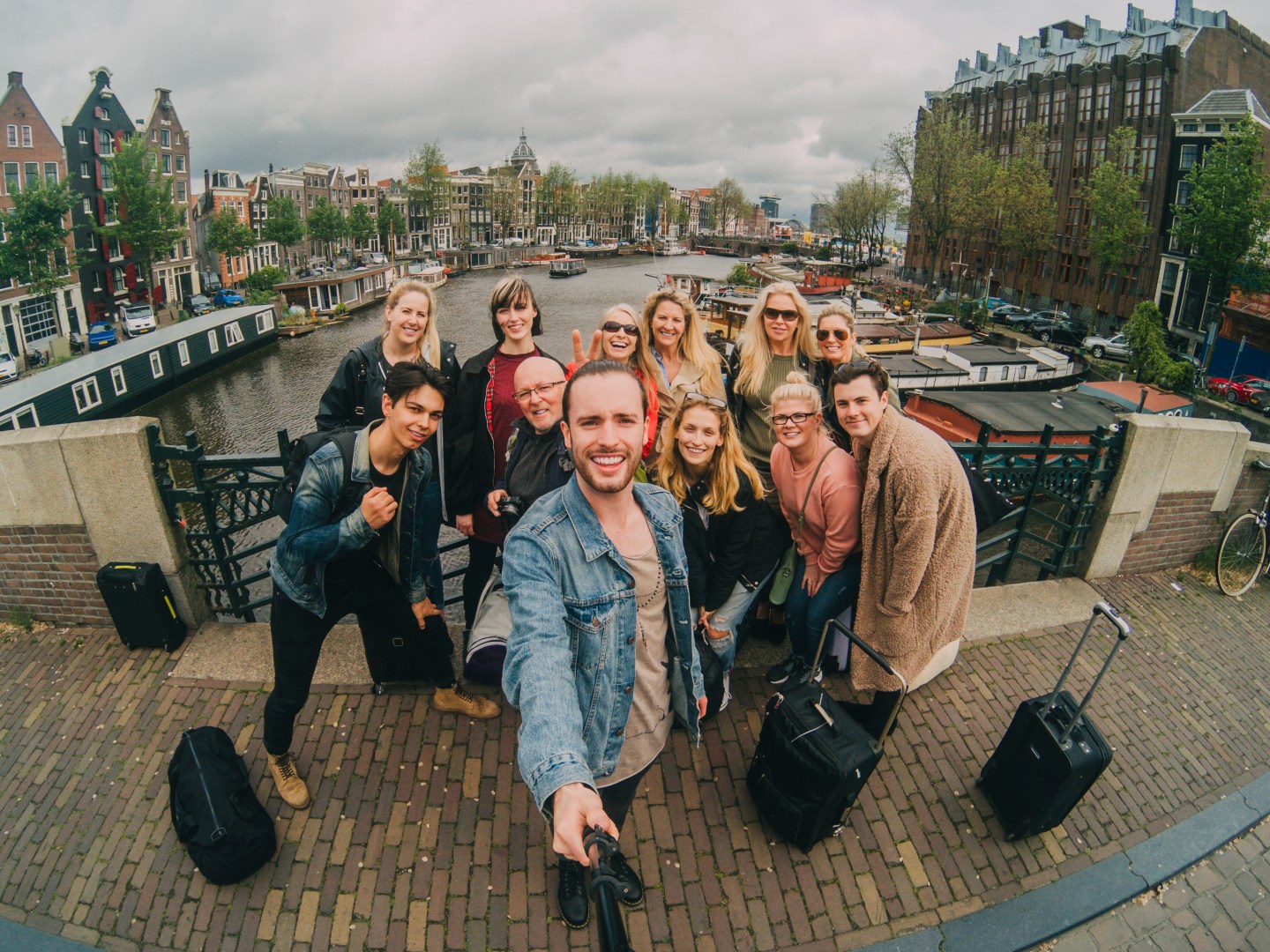 Group of friends taking a Selfie as they stand by the canal in Amsterdam. They are using a Selfie stick and action camera
SolStock/Getty Images

The Amsterdam city government has a new Public Enemy No. 1: rubber duckies.

As any recent visitor to the Dutch capital has witnessed, it’s become virtually impossible to stroll from one of the city’s iconic canals to the next without encountering an army of the tiny yellow waterfowl—kitted out to resemble anyone from King Tut to Madonna—roosting on every surface of the countless tchotchke shops that dominate the city’s center.

Cute as they may be, those ducks—which have become something of a mascot for the Netherlands in tribute to Dutch artist Florentijn Hofman’s famous giant rubber duckie installations—now find themselves in the crosshairs of a city government grappling with a tourism boom that is increasingly disrupting elements of daily life in Amsterdam and stoking a backlash among exasperated residents.

One result: a new zoning crackdown aimed at limiting the number of duck sellers and other souvenir shops clogging the city center. But Amsterdam’s focus is much broader than just adorable plastic doodads. The city government is also targeting tourists’ wallets with a three euro-per-night per person accommodation tax—enacted in January—and just this month voted to ban guided tours of its infamous Red Light District starting in April. That comes after Amsterdam stopped all new hotel construction in big swathes of its center, and amid a push to convince the Dutch national government to pause any increase to the number of short-haul arrivals into Schipol airport until 2023.

The new rules are a response to the steady increase in visitors to the picturesque city: Annual overnight stays climbed by 73% to 19 million between 2005 and 2018. If the trend continues, the city projects that that number could reach 29 million by 2025—quite a sum for a metropolis that’s home to fewer than one million inhabitants. All those tourists have brought plenty of money to the city, certainly, but some say they’ve also brought overcrowding, overwhelmed trams and trains, and a squeezing out of small service businesses that cater to local residents. “Locals can’t find a grocery store or a bakery anywhere,” says a spokesperson for Amsterdam’s deputy mayor Victor Everhardt, who oversees economic affairs.

The question of when tourism turns from boon to bust—and what to do when that tipping point is approaching—is one being asked in many cities across the globe, including several that double as their country’s business hub. In New York, the annual number of visitors has doubled to 66 million in 20 years, while in Barcelona, tourism increased five-fold between 1990 and 2016. Globally, people visited a foreign country 1.4 billion times in 2018, up 6% over the previous year, according to the United Nations World Tourism Organization (UNTWO), which also cites cities like Singapore and Dubai as seeing some of the biggest gains. The primary factors driving the global boom, say tourism experts: a strong economy in many countries, a rise in Chinese travelers, and cheap airfares. (The corona virus currently slamming China is, however, expected to dampen growth this year: on Friday, the International Air Transport Association forecast the first drop in global passenger demand since 2003.)

The surge is tourism is adding up to more stress on cities, many of which are already facing decaying infrastructure, traffic, a lack of housing, and a dozen other issues that only get worse when millions of new people are added to the mix. That’s prompted some governments to look into remedies that could have economic ripples that go well beyond tourism. It’s one thing to zone rubber duckies out of parts of Amsterdam or curb how many rooms Airbnb can list. It’s quite another to halt hotel construction, limit flights, or take other steps that have the potential to limit business travel or other factors linked to economic growth.

For those attuned to that difference, the question becomes: how to manage tourism without killing the golden goose that creates jobs and fills the public coffers. Tourism to New York City generates about $12 billion in tax revenues for the city, state and federal governments, according to NYC & Company, the city’s tourism promotion agency. What’s more, tourism is as big an employer in New York as Wall Street. Globally, tourism and travel are a $9 trillion industry, according to the World Tourism and Travel Council.

While no metropolis has yet entirely cracked the code, there are signs that cities are finding creative new ways to strike a balance. For instance, one report on global cities’ “readiness for tourism growth” praises New York City for its success in getting visitors to explore the world beyond Times Square.

For instance, NYC & Company has worked with merchants on Arthur Avenue in the Bronx, a strip with the highest concentration of Italian-American businesses in the city and the area regarded by many as New York’s true Little Italy, to help them grab a larger slice of the city’s tourism pie. Among the lessons the agency has provided: how to promote their businesses to tour operators and how to best handle large groups.

“You are seeing the emergence of new neighborhood destinations,” says NYC & Company. CEO Fred Dixon, who also cited a spike in visitor interest in neighborhoods like Bushwick, Brooklyn.

For many coastal cities, cruise lines—and the spew of humanity that issues from the docked ships—are a major cause of overcrowding. Dubrovnik, Croatia has tackled the issue by convincing the major cruise lines to stagger dockings over more days, allowing the city to receive the same number of tourists per week, without turning its tiny Old Town into a sardine can when they all try to squeeze through the city walls at the same time. (The mayor has also taken steps to reduce the number of souvenir stands in the city.) The cruise industry, too, seems to see the advantage of such an arrangement.

“We also know our guests will ultimately have a better overall experience on a cruise when welcomed with open arms and real excitement and anticipation by the communities we visit, so it is in our best interest to help find a solution,” says a spokesperson for Carnival Corporation, one of the cruise operators that agreed to this move.

If tourism eventually gets to the point where it begins to damage more cities’ status as business centers, the measures may become more draconian. But thus far, there’s little evidence that that’s in the offing.

Indeed, Amsterdam’s profile as an international hub has only risen: the number of businesses in the city grew 20% between 2013 and 2018, according to city statistics. And New York has continued to boom, with many of the latest round of big hotels being built near its convention center. “New York has always been a crossroads and a place people have always come to for business,” says Dixon. But, he adds, “the infrastructure hasn’t kept pace.”

Last autumn, New York’s city council held public hearings on how to better manage the city’s surging tourism. Local think tank Center for an Urban Future is pro-tourism, with its executive director Jonathan Bowles saying in his hearing testimony that “few things have been as important to (New York’s) economic renaissance.” At the same time, Bowles called on the city to reconsider the way it handles some of the side effects—such as the parked tour buses that agglomerate near Times Square or the sidewalk traffic that gums up popular areas of town—and upgrade services like the public transportation serves the city’s airports.

Such concerns will likely sound familiar to other cities on the tourism hot list—and addressing them is far from easy (or cheap). But ultimately, doing so has the potential to make a metropolis a better for both duckie-buying sightseers and those who call it home. “Our policy is quite clear,” says Amsterdam’s Al. “The city is first a place for residents, and then second a place for visitors.”