What the candidates aren’t telling you: America’s heading for a tax on the middle class 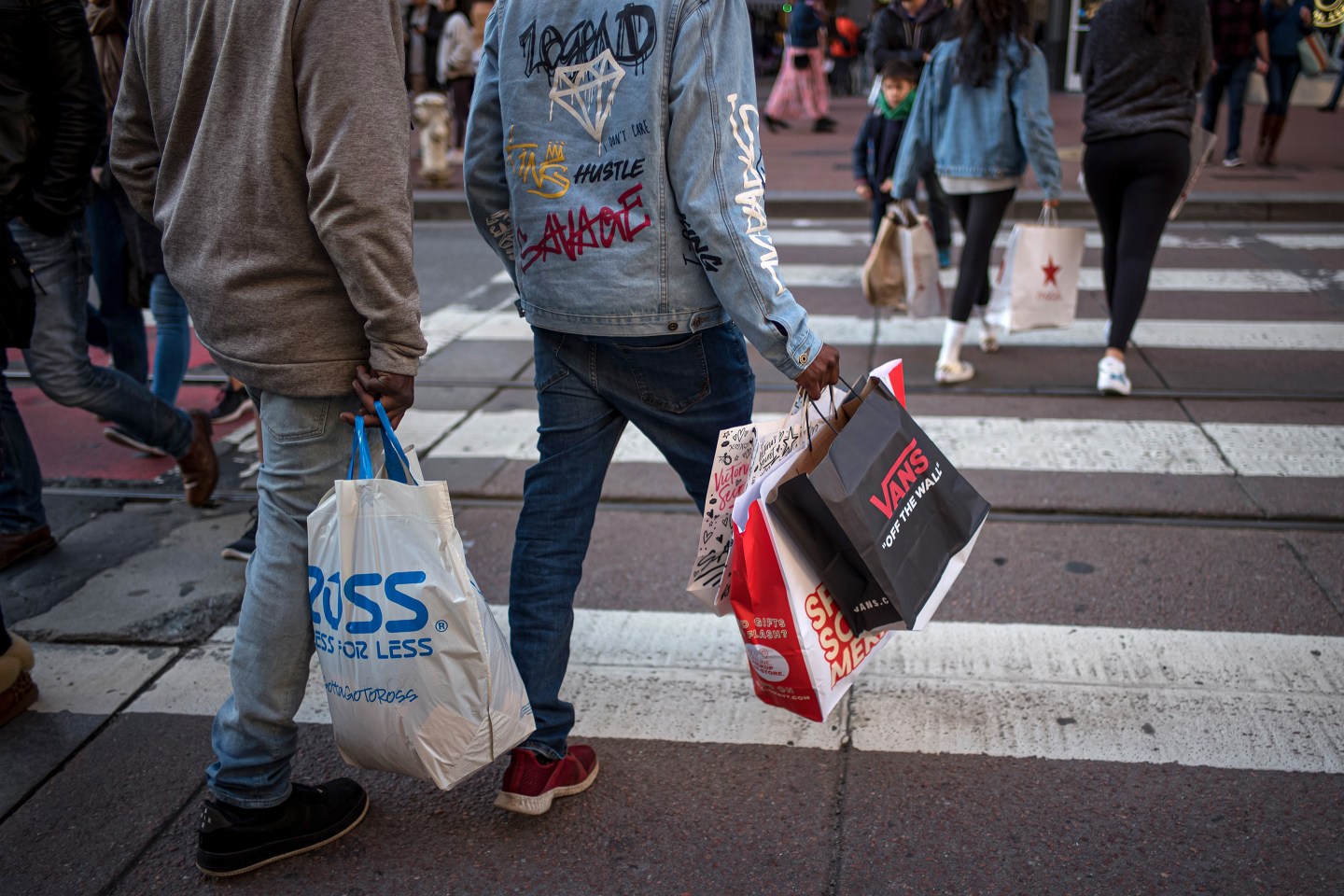 The odds are excellent that middle class Americans will get hit by a giant value-added tax (VAT) in the next decade. The arrival of a VAT would move the U.S. much closer to the fiscal policies of Europe and Asia, whose nations place a lot more of the burden for funding the government on autoworkers, secretaries, nurses, and the rest of the non-affluent. Says Brian Riedl, an expert on fiscal policy at the conservative Manhattan Institute: “If America wants to spend like Europe, and it does, America will have to tax like Europe.”

A VAT is the last thing the candidates vying for the White House want to talk about. The contenders for the Democratic nomination, from Sanders and Warren on the left to Biden and Buttigieg in the center, swear that no goal is more vital than raising living standards for the middle class. For all of them, the idea of tax hike that would shrink take-home pay for the average family is unthinkable. Across the aisle, President Trump is proposing another income tax cut for working families if voters award him a second term.

Although no major politician has proposed a VAT since Senator Ted Cruz (R-Tx) in 2016, the nation’s fiscal future is looking so dire that importing the potent revenue-raiser––a fiscal pillar of every other major economy––is looking inevitable. It isn’t the Democratic candidates’ proposals for new spending that make the VAT a near-certainty. The trajectory of U.S. outlays is so steep that even without costly new programs, a gigantic fresh source of funding will be needed to forestall a crisis. In his recently-released federal budget blueprint for fiscal 2021, Trump proposes no structural reforms to the two entitlements driving the unsustainable trend in spending: Social Security and Medicare. In his State of the Union Address, Trump didn’t mention the dangers of fiscal debt or deficits, the biggest threats to our future prosperity, at all.

Here’s a snapshot of America’s fiscal quagmire a decade from now, as projected by the Congressional Budget Office. I’ve adjusted the CBO forecasts from its “The Budget and Economic Outlook: 2020 to 2030,” released on January 20, with its “alternative” scenario from last August. The CBO is required to base its predictions on current law, so it assumes, for example, that Trump tax cuts won’t be extended when they’re scheduled to sunset in 2026. The alternative budget projects tax reductions and spending increases now in force will be renewed. Since Congress almost always votes to keep existing programs going, the alternative budget is more realistic—and even scarier.

According to the CBO’s alternative forecast, federal spending will jump from $4.45 trillion in 2019 to $7.375 trillion in 2029, driven by an almost 80% rise in outlays for entitlements. Spending would balloon over those 11 years from 22.6% of the GDP to 24%. Although revenues are also projected to grow briskly, the rise of expenses far outstrips dollars collected in taxes, driving the federal deficit from $984 billion last year to $2.156 trillion in 2029. At that point, the U.S. would be borrowing almost 25 cents for every dollar it spends. If the average rate the U.S. pays on its debt rises to just 3%, the annual interest burden would triple to $1 trillion, amounting to 15% of all expenditures.

By 2029, total federal debt would rise to $29.6 trillion, or 104% of national income, compared to last year’s 79%, reaching the highest level since 1946. All added together, the mounting deficits over the next decade total $15.5 trillion.

Keep in mind that these numbers assume no wars, no recessions, no new spending programs, and a continuation of extremely low interest rates. But even in this bluebird future, the size of the deficits pose such a serious threat to our future prosperity that Congress will be forced to choose between a financial catastrophe and radical action.

The new vehicle essential of filling the burgeoning hole is a VAT. At each link in the chain of production for cars or toys, manufacturers pay a cash duty to the government based on their profit. This duty is reimbursed by the supplier they sell to, thus gradually driving up the costs by the amount of tax. The VAT is folded into the price at the checkout counter. So consumers pay the full tax, just as they pay sales taxes. But VATs operating differently than sales tax, because it’s manufacturers, not retailers like a corner grocery or toy store, that send the cash to the government. Since manufacturers and other businesses are audited regularly, they aren’t likely to cut corners. That minimizes fraud, and makes the VAT a powerful tool for collecting revenue.

Raising the VAT typically provokes little political resistance because the increases are included into the total price shown on sales receipts, and not broken out as a separate item like sales taxes, they aren’t obvious to consumers.

Of the 36 OECD members, the U.S. is the only nation without a VAT. It’s rarely been proposed by American politicians. They typically fear that voters will bristle at what’s widely perceived an enabler of big spending in Europe. During the 2016 presidential campaign, Ted Cruz championed a 19% VAT that would raise sufficient funds to eliminate all payroll, corporate, and estate taxes, and install a flat federal income tax of 10%. Even though Cruz’s VAT was designed to simplify America’s Byzantine tax system by replacing a welter of levies, his proposal fell flat.

America will soon be consumed by a debate on how to escape a looming fiscal crisis, and the VAT will be the central topic. America will get over its aversion to a VAT for a simple reason: It has to. The VAT––probably in tandem with rising payroll taxes––is the only revenue-generator mighty enough to fill the burgeoning budget hole.

To put the U.S. on firm fiscal footing, a reasonable goal is achieving a balanced budget by 2029. It’s clear that the political class has little interest in taming entitlements, so all of the shortfall would need to be filled exclusively by new revenue. To get there, the U.S. would have to raise an additional $15.5 trillion in taxes, the amount equal to total deficits from 2020 through 2029. Taxing the rich won’t get us anywhere close. According to Riedl’s calculations, raising the top income tax rate to 70%, imposing a 6% wealth tax, 50% duties on capital gains and 77% on estates, would garner between $4 and $8 trillion over ten years, meaning that the maximum number would reach around half the total required.

It’s important to note that all other OECD nations rely for most of their revenue on two broad-based levies that draw heavily from the middle class, the VAT, and payroll taxes. The U.S. is much more reliant on income tax, which contributes 50% of all revenue. That’s why America’s tax system is by far the world’s most progressive, measured in the oversized share of taxes contributed by high-earners and the wealthy. But the lack of a VAT, and relatively light burden of payroll taxes, leaves lots of room for the U.S. to tap the masses that are by far the top revenue-generators across the globe.

Assume that the U.S. goes with a levy that’s broad based—the broader the base, the lower the rate needed to raise the same number of trillions. The CBO estimates that a VAT excluding only rents, education, and health care costs reimbursed by the government raises $384 billion for each point imposed over ten years. Getting to $15.5 trillion would require a VAT of 40%.

Obviously, a VAT remotely that size won’t happen. The U.K., France, Spain, and Italy all have VATs in the low to mid 20s. But marrying a VAT and a much higher payroll tax could raise the full $15.5 billion, while putting the U.S. in the fiscal mainstream of OECD nations. Today, the U.S. rate supporting Medicare, Medicaid, and Social Security stands at 15.3%, an exceptionally low number compared to almost all other OECD nations.

Like the VAT, payroll taxes are a redoubtable tool for amassing revenue because so many people pay them, and in most countries, pay a lot of them. The CBO estimates that in the U.S., a one point increase raises $900 billion. If the U.S. chose to collect half the $15.5 billion from launching a VAT, and the other half from lifting the payroll tax, it could raise the full amount, and balance the budget, with a VAT of 20%, and a payroll tax increase of 8.5 points to 23.8%.

The shift towards this twin solution could take either a long or a short route. In the long scenario, the U.S. enacts no big new spending plans, and we don’t suffer a major recession in the next few years. Half of the 73 million baby boomers are already retired, the the rest will go on Social Security over the next decade. The political will to reduce benefits is already weak and will only get feebler as boomers advance into their 70s. Congress is likely to work around the edges by, for example, paring some low priority spending, raising rates for high earners, and reducing military spending.

But those efforts will do little to shrink the swelling shortfalls. “It’s hard to imagine the prospect of $2 trillion deficits not spooking the financial market and voters,” says Riedl. “Rates could spike and the stock market sell off, sparking a recession.” Congress would declare that an upheaval is needed to prevent a crisis, and the only way to save the prevent a meltdown is grabbing the VAT-payroll tax lifeline.

The timeframe shortens if Congress and a new administration secure an agenda of big new spending. For example, both Bernie Sanders and Elizabeth Warren are championing Medicare For All blueprints that would require more than $30 trillion in new funding over the next decade, twice the total deficits already projected. Leaving aside both candidates’ additional plans in green energy and universal pre-k child care, the health care initiatives alone would drive annual deficits way over the $2 trillion danger mark as soon as they’re enacted.

Then, the crisis would lurk around the corner, not down the road. Congress would move swiftly to pay for the new spending piled on top of today’s trillion-dollar shortfalls the only way they can be paid for: by imposing a VAT and a payroll tax hike. And those burdens would be much bigger than the 20% VAT and 8 point payroll tax increases needed to cover the $15.5 billion deficit, since future deficits would be twice that size.

A few years ago, this writer invented the term “HENRYs” as an acronym for “High-Earners Not Rich Yet.” It refers to families that earn from $250,000 to $500,000 a year, whose burden from taxes, mortgages, and saving for their kids’ private colleges is so heavy that although they’re affluent, they’ll probably never be able to put enough aside to become truly rich.

America’s budget crisis has inspired me to coin a new name for the folks who are going to be hit by tomorrow’s huge tax increases. They’re the “MITTs,” the Middle Income Tax Targets. They’ll be the new ATMs because, as the legendary robber Willie Sutton used to say about banks, they’re where the money is. The tragedy is that if no major changes are implemented, the big VAT and payroll taxes the MITTs will be paying won’t be invested in making their lives better, but in funding the healthcare and retirement benefits for the Baby Boomers. These days, the HENRYs might better be called the HENRIs, a Gallic-sounding take meaning high-earners, not rich indefinitely. The MITTs will have a lot in common with European workers in the years to come. They just don’t know it yet.