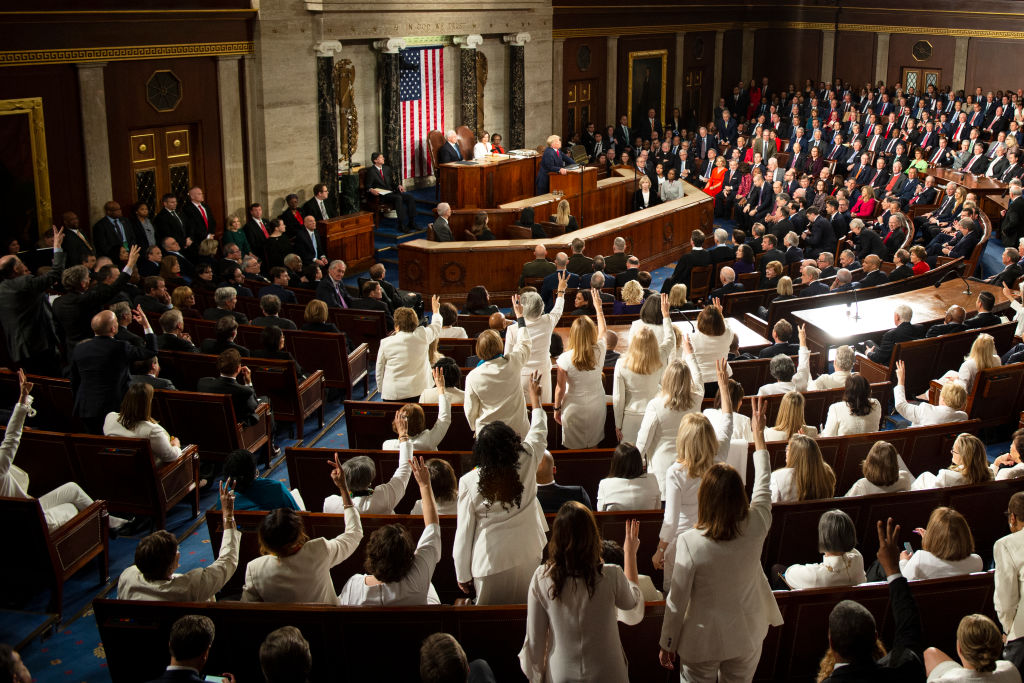 UNITED STATES - FEBRUARY 4: House Democrats chant HR3 and hold up their hands with three fingers extended, a reference to a bill introduced by the late Rep. Elijah E. Cummings, D-Md., on prescription drug prices, after President Donald Trump calls for a bill to lower drug prices as he delivers his State of the Union Address to a joint session of Congress in the Capitol on Tuesday, Feb. 4, 2020. (Photo by Caroline Brehman/CQ-Roll Call, Inc via Getty Images)
Caroline Brehman—CQ-Roll Call, Inc/Getty Images

Good morning, Broadsheet readers! Britain is up in arms about an MP’s wardrobe, Glossier tries to trademark its pink bubble wrap, and Trump endorsed paid family leave during the State of the Union—and got a muted response. Have a terrific Thursday.

– Paid leave limbo. Amid the protests and Nancy Pelosi’s paper-tearing, it was easy to miss another notable moment at Tuesday’s State of the Union speech: Donald Trump becoming the first Republican president to ever call for paid family leave during the annual address.

But the policy idea—long popular with Democrats and opposed by Republicans wary of additional government spending—got little applause from the left.

The New York Times‘ Claire Cain Miller explains the muted response to the bipartisan legislation: “It does not provide a new source of funding to pay parents during leave; instead, they borrow from their future selves. It covers only leaves for babies or newly adopted children under 6; it does not cover care for sick family members or to take care of personal medical problems. And it does not guarantee that a person’s job is protected when taking the leave.”

Advocates of the measure characterize it as a starting point; a compromise. For one, it gets around Republicans’ opposition to new taxes, making it politically-viable in a divided Congress. But critics say it doesn’t ease parents’ financial burden, it just reallocates it to another era of their child’s life. Democrats, for their part, are pushing the Family Act that’s modeled after a government-run paid leave scheme already enacted in eight states. It’s funded by an increased payroll tax on employees and employers.

Both parties are inclined to pass a federal paid leave bill considering the policy’s popularity with the vast majority of Americans (though they—like lawmakers—haven’t reached consensus on how to pay for it.)

It’s worth noting that while the U.S. spins its wheels on paid leave, Finland on Wednesday extended its already generous (by American standards) policy. New parents will each get nearly seven months of paid leave, up from four months for moms and two months for dads. Single parents will get both parents’ allotment: 14 months. The policy is designed to be gender-neutral and is aimed at improving Finland’s declining birth rate.

Finland’s women-led government, helmed by 34-year-old Prime Minister Sanna Marin, pursued the reform despite its additional $110 million cost. Said Social Affairs Minister Anna-Kaisa Pekonen: “The reform will support all kinds of families and ensure equal leaves for children regardless of the form of the family.”

- The Collins/Murkowski effect. The Senate voted to acquit President Trump on both articles of impeachment yesterday. The two GOP women often eyed as potential swing votes—Sens. Susan Collins and Lisa Murkowski—both ended up voting not guilty. (Sen. Mitt Romney turned out to be the lone Republican defector.) This piece puts Collins's and Murkowski's decisions in the context of their votes during Brett Kavanaugh's confirmation hearing: Slate

- Bakkt to the future. Before she was appointed to her seat, Sen. Kelly Loeffler was the CEO of the fintech company Bakkt. Now that startup is launching a new product that will allow consumers to group together rewards and loyalty accounts and spend those points as dollars. Loeffler's husband Jeff Sprecher, CEO of Intercontinental Exchange which backs Bakkt, talks to Fortune about the big goals of his wife's former company. Fortune

- A personal decision. Charlotte Sullivan writes about her wrenching decision to have an abortion in part because of her and her husband's lack of access to paid family leave. Sullivan was employed at a liberal arts college but hadn't been working at the school long enough to qualify for its parental leave policy; her husband worked at a grocery store with no leave. She writes about the choice here: Guardian

- Producing parity. As the Oscars continue to snub female directors, female producers are actually having a pretty good year. Eight of nine best picture nominees have at least one female producer—the most since the Academy starting nominating 10 films in the category a decade ago. The producers whose movies are among this year's top picks include Kwak Sin Ae from Parasite, Amy Pascal from Little Women, Jane Rosenthal and Emma Tillinger Koskoff from The Irishman, and many more. LA Times

- Tax season. The island of Jersey, in the English Channel, until this week had a law on the books that prevented a married woman from filing taxes on her own or talking to tax preparers without her husband's permission. Lawmakers finally voted to scrap the rule, which had some other strange consequences too; in same-sex couples, the younger spouse was considered the "wife" and the older the "husband" to decide who was allowed to control the couple's taxes. Guardian

- Trademark pink. If you've ever bought anything from Glossier, you'll probably recognize its trademark pink bubble wrap pouches. Emily Weiss's brand is now trying to actually trademark those bags—but is running into a fight with the U.S. Patent and Trademark Office. The office says the packaging is "functional" rather than "aesthetic," which would disqualify it from a trademark. Glossier is trying to prove that the specific shade of pink makes this particular bubble wrap part of its brand. Fast Company

- Cold shoulder. Today's British Parliament drama involves MP Tracy Brabin, who wore an off-the-shoulder top inside of Parliament. She wore the outfit while commenting on the prime minister's recent treatment of journalists, and responded to criticism of its appropriateness with: "I'm not a slag, hungover, a tart, about to breastfeed, a slapper, drunk [or] just been banged over a wheelie bin. ... Who knew people could get so emotional over a shoulder[?]" Guardian

"When you have somebody whose persona is bigger than the part, you got to make it right for me. Or why have me?"

-Fran Drescher on starring in the new NBC sitcom Indebted