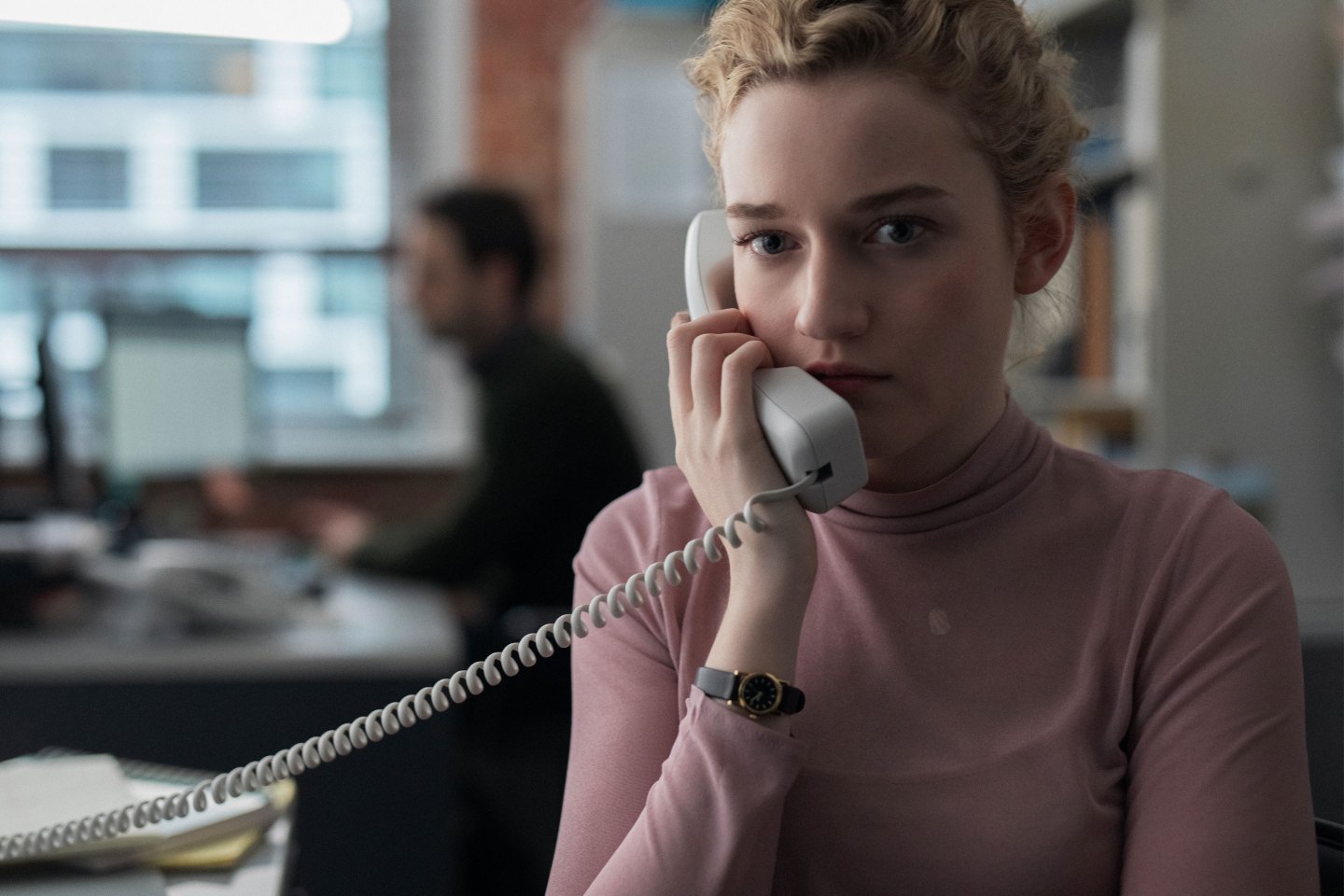 Two years after the Harvey Weinstein story originally broke, The Assistant is the first truly significant movie about the scandal, despite never once mentioning him by name.

Australian writer-director Kitty Green’s film (now in theaters) is a fictional look at the kinds of toxic workplace cultures that enabled Weinstein and others like him, across decades, to exploit their standing as Hollywood power players to abuse, harass, and assault women.

Unsettling and understated, it focuses on Jane (Julia Garner, of TV’s Ozark) a low-level employee at a production company who grows increasingly uncomfortable with the predatory behavior of one top executive, who’s never seen. Over the course of a single workday, Jane makes coffee, fields phone calls, organizes work trips, and cleans unseemly stains off the executive’s couch, approaching each of these duties with an uneasy acquiescence. But when a young woman shows up claiming to have been offered a job at the office, Jane’s concerns that her boss may be acting inappropriately toward the new arrival reach a fever pitch.

To Green, who spoke to Fortune by phone around the film’s premiere at the Sundance Film Festival, The Assistant’s protagonist and mundane, day-in-the-life structure were selected in order to emphasize the normalized ways in which workplace predators can often turn their office spaces into hunting grounds—and to show how their coworkers, male and female, can grow accustomed to such abuses.

“We’re all complicit in some way, as a part of this system that really hurts and sidelines women,” says Green. “We need to interrogate our behaviors and the structures we’re a part of.”

Writer-director Kitty Green on the set of “The Assistant.” She says there are “ways to be thoughtful and sensitive around speaking about misconduct.”
Ty Johnson—Bleecker Street

Green—whose previous films have included the incendiary true-crime doc Casting JonBenet—brought a documentarian’s eye for sobering detail to The Assistant. The character of Jane, as played by Garner, undergoes a subtle transformation during the film, the emotional and physical demands of her job gradually leading her shoulders to stoop and her morale to collapse. Despite this, the actions she takes throughout her workday feel numbingly repetitious, from arranging hotels for the executive’s guests to stay in to intercepting angry calls from his suspicious wife.

“I was focused on the most ordinary stories as opposed to the extraordinary,” explains Green. “When you’re talking to people whose bosses have a lot of power and money, you end up with crazy tales, but I was looking for things transferable to any workplace globally.

“I was also looking for concrete examples of something systemic and cultural, which can be often hard to pin down,” she adds. “I thought if I could focus on glances, gestures, and looks, these tiny moments that can really affect someone’s self-confidence or really rattle somebody while often going unnoticed by everyone else. I thought if I could place the audience squarely in Jane’s shoes, they’d experience that and emotionally identify with her.”

Green’s goal with The Assistant was not just to shed a light on sexual predators, she says. “I was interested in addressing broader issues of systemic gender imbalances, and the way men have a very toxic culture that keeps women out of power,” she explains.

In The Assistant, Jane is often tasked with cleaning and organizing, as well as looking after children whose parents have stopped by the office. During one key scene, when a child’s antics distract a male assistant (Noah Robbins), he glares at Jane, silently demanding she be the one to intervene. Eventually, she complies.

“I was definitely interested in gendered division of labor,” says Green, adding that she wanted to flesh out “the idea that women are often being given the tasks like caregiving duties, looking after children, and getting coffee, while the men get to stay on phone calls, sit in on meetings, and get quickly promoted.”

“These are all things that lead to men being in more positions of power. I was kind of getting at the larger system through these smaller details,” she adds.

In doing research, Green interviewed office employees in her native Australia and the United Kingdom, as well as in New York and Los Angeles. She did speak with former employees at The Weinstein Company and Miramax about their experiences working under disgraced media mogul Weinstein. But Green is wary of linking the predatory movie executive in her film, who goes unseen throughout, too closely to Weinstein.

“This kind of behavior happens all over the place and isn’t limited to the Weinsteins,” she explained. “It would be reductive to imply only one organization is where this goes on.”

Crucial to this perspective is a scene in which Jane arranges a meeting with an HR rep played by Succession’s Matthew Macfadyen. After initially seeming receptive to her concerns about the executive’s behavior, he dismantles Jane’s case before her eyes.

Garner (left) and Green, who says, “I thought if I could place the audience squarely in Jane’s shoes, they’d experience that and emotionally identify with her.”
Ty Johnson—Bleecker Street

“I’d been told by a lot of people that HR departments are there to protect companies, not employees,” explains Green, who devoted 12 pages of her lean script to that scene. “I wanted that to be very clear. I wanted to look into gaslighting and this idea he could convince her that her argument doesn’t make sense, how he could poke holes in what she came in with so she ended up confused about her own thoughts.”

Despite this, the HR rep character never shifts into outright villainy. “There are easy ways to write it where he gets angry,” says Green. “I thought it’d be more insidious if he was calm and coherent, with a clear argument.”

The Assistant is the second movie within the past few months to look at power abuses in the media industry. The first, Bombshell, opened in late December and took a stylish, slightly comedic approach to depicting the ouster of Roger Ailes from Fox News, precipitated by allegations of sexual harassment from employees there, among them anchors Megyn Kelly and Gretchen Carlson.

Bombshell was met with mixed reviews, with many questioning its arched-eyebrow tone and slick execution; that the film was written and directed by men—The Big Short’s Charles Randolph penned the script, with Jay Roach (Trumbo) behind the camera—soon became a particular point of contention in critics’ circles.

Green admits she was “disappointed” by that film’s approach.

“I’m not going to say men can’t make those movies, but I do think the creators of Bombshell had their eyes on a more sensationalist narrative and missed the larger structures at play,” she says. “They missed a lot, in telling that story. I wonder if that is because they’re men, so they’re less aware of these broader cultural problems.”

As the subject of the male gaze comes up, Green notes that her muted approach to The Assistant is a perspective she settled on after thinking seriously about how power dynamics and sexual abuse have been historically depicted on-screen.

“I knew what I wanted to do was not show any kind of assault,” she says. “I knew we’d seen enough of that, and as women, we’re fed up with seeing that depicted on-screen. There are ways to be creative about how you talk about these issues, ways to be thoughtful and sensitive around speaking about misconduct.”

—Oz Perkins on Gretel & Hansel, feminist fairy tales, and suggestive triangles
—In the age of Twitter, seconds-long streaming delays can make or break live entertainment
—American Factory directors on capturing what “globalization looks like on a human scale”
—In the Dark podcast host Madeleine Baran on Curtis Flowers’ release, season three, and more
—Taika Waititi on Kiwi humor, directing as Hitler, and why kids should see Jojo Rabbit
Follow Fortune on Flipboard to stay up-to-date on the latest news and analysis.