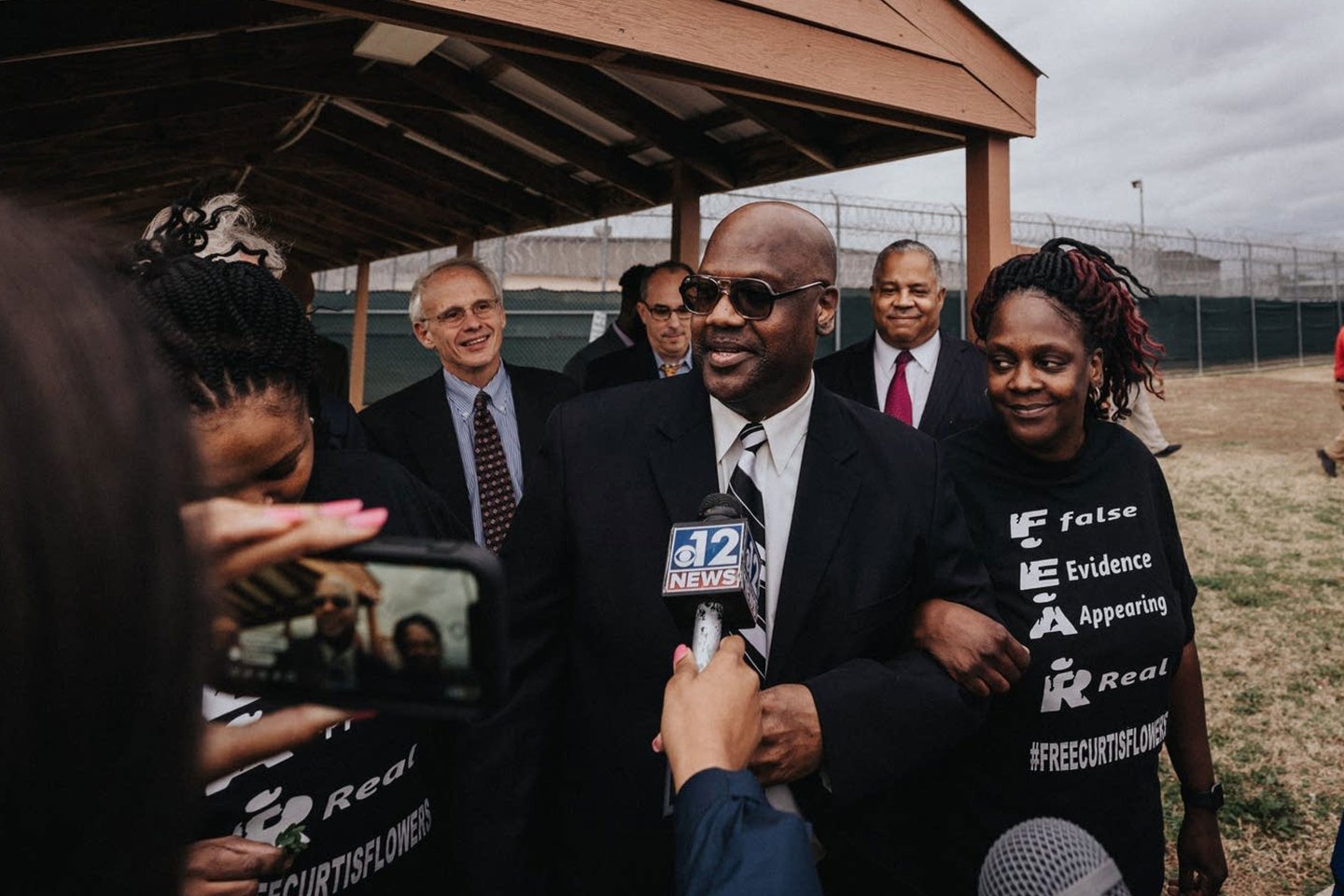 On Dec. 16, 2019, Curtis Flowers was released on bail after spending 23 years imprisoned for a quadruple murder in Winona, Miss., a crime for which he was tried and convicted six separate times. The judge ruled that the evidence against Flowers—whose conviction was overturned by the U.S. Supreme Court over questions of racial bias in jury selection for his sixth trial—wasn’t strong enough to keep him in jail while the state mulled trying him for the seventh time, with a key revelation coming from the podcast In the Dark.

In court that day, the defense played a segment from a 2018 episode of the APM Reports series in which the state’s star witness, Odell Hallmon, told APM’s Samara Freemark that his testimony about Flowers’ confessing to the murders while they were incarcerated together was “a bunch of lies.” Hallmon’s claim, which he said he made in return for favors from the district attorney, was the only piece of direct, not circumstantial, evidence the prosecution had—the key to convincing a jury to send Flowers to death row.

Having the podcast become part of the hearing that got Flowers out of jail that day was a surreal moment for host and lead reporter Madeleine Baran, who was seated in the court’s jury box alongside other reporters.

“We’re so much in work mode, recording audio, so the magnitude of what transpired did not sink in in that moment,” Baran tells Fortune. “I’m not surprised that the defense would want to use the fact that the state’s star witness recanted in a taped interview with us. If the facts had been different, I’m sure the state would have used some of it. I mean, to hear your own voice being played back at you when you’re in the courtroom, that’s strange.”

Hundreds of spectators line up to hear arguments before sunrise at the Supreme Court in Washington, D.C. in the Flowers vs. Mississippi case on March 20, 2019.
Greg Kahn—APM Reports

Afterward, Baran and producer Natalie Jablonski went to the Flowers house for Curtis’s welcome home party and got to talk briefly with the man of the hour. “What was striking was just how normal that gathering was,” Baran says.

“We had been over to that family’s house so many times in the course of our reporting, and it really could have been any other gathering there. It wasn’t like it was some crazy party and everyone was so excited. It was you’re walking into business as usual at the Flowers house. There was [Curtis’s father] Archie Flowers sitting at the table eating some fish, some people in the other room talking, some music is on the background, just normal. But here’s Curtis in the middle of this. It all speaks to just how close that family is. In so many cases when someone goes to prison, regardless of whether they did it or not, it’s really hard to maintain connections to your family.”

Flowers’ release and the subsequent recusal of district attorney Doug Evans, who prosecuted all six of the trials, are the latest developments in the second season of In the Dark, which Baran and her team started reporting on in 2017. After the first season, in which they examined the kidnapping and murder of 11-year-old Minnesota boy Jacob Wetterling and the subsequent failures of law enforcement to find his killer for over 25 years, they received a tip about Flowers’ case and decided to report on it as a means of exploring the power of prosecutors in the United States.

The team moved to Winona and spent a year talking to everyone they possibly could—family members, witnesses, police officers, lawyers, and acquaintances—while scanning around 100,000 pages of legal documents and analyzing data about race and jury selection in Mississippi. The goal was never to exonerate Flowers, Baran says, just to report the story, examine prosecutorial misconduct, and, hopefully, figure out how one person could be tried six times for the same crime. The case going to the Supreme Court and Flowers’ release were possible outcomes, they knew, but certainly not ones they expected so soon.

“Our plan was always to continue to report on it if it got reversed and there was a seventh trial,” says Baran. “When I pictured it in my mind, I guess I pictured the possibility that in 10 years we would still be reporting on this case somehow, just knowing that whenever there is an attempt at an appeal, especially in a case with a serious crime such as quadruple murder, these things take a long time. The fact that he has actually passed through all of those hurdles to the point where he’s out on bail with a conviction overturned is pretty remarkable.”

What’s also remarkable is the fact that, in an era when newsrooms and budgets are being slashed, Baran and her team were given the resources to do this kind of work. In the Dark is produced by American Public Media, which is second only to NPR in U.S. broadcasting public radio stations, meaning that a large portion of its funding comes from donations. “I can say that yes, it is costly to do this,” Baran says, pointing out that they have a five-person team plus an editor, data reporter, and digital team who spend “substantial parts of their year” working on In the Dark. She says it’s important that the podcast includes moments that chronicle the “knocking on doors, scanning documents, and going into semi-abandoned locations looking for files” so the supporters know where their money is going.

“I’m very fortunate to work for a company that has the resources and the commitment to fund this work…You’ve got to be finding out things that powerful people don’t want you to find out and delivering that information to the public. Listeners get that. People want this type of work,” she says. “I would hope that people see the opportunities that podcasting has for serious investigative work, not just because of our reporting. It’s an interesting opportunity to get an audience interested in important stories, complicated stories.”

There will, of course, be more In the Dark, with a third season in the works now. The topic has yet to be announced, so all Baran can say is, “All of our stories will involve a central question. They all involve powerful people engaged in wrongdoing that is significant and harms people.” With Flowers released, a Peabody Award for season one, over 60 million downloads of In the Dark, and story tips from all over the country, Baran says she feels “an expectation that the work will be compelling. And I’m grateful for that expectation because I think it’s born out of a lot of hard work by everyone on the team.”

In the meantime, she’s also prepared to cover any updates in Flowers’ case and hopes to interview him soon, once he’s settled down.

“He left Mississippi the morning after he got out on bail. By all accounts, he’s doing well,” she says. “He celebrated Christmas with his family. It’s kind of hard for any of us to imagine what it would be like to be locked up for 23 years and all of a sudden be out. I mean, just thinking about really basic things that we take for granted: going outside, being in nature, waking up whenever you want, getting to decide what kind of shirt to wear—all of those things are absent when you’re in prison. I don’t know what that would be like. When he came out of jail, he didn’t seem to have a kind of edge to him that you might expect. There didn’t seem to be any bitterness. I’d be curious to talk to him more about what that time in prison looked like for him and how he feels like he changed as a result of it.”

Correction, January 28, 2020: An earlier version of this story misstated that Odell Hallmon spoke with Baran. It has been updated to clarify that he spoke with Samara Freemark.

—The Grammys remain more of the same even amid calls for change
—Taika Waititi on Kiwi humor, directing as Hitler, and why kids should see Jojo Rabbit
—Zombi Child auteur Bertrand Bonello on colonialism, French trap music, and a “cinema of fear”
—Sundance 2020: Hunting for the next indie hit and what it may be worth
—Awkwafina Is Nora From Queens team: Asian-American representation is not a “fad”
Follow Fortune on Flipboard to stay up-to-date on the latest news and analysis.