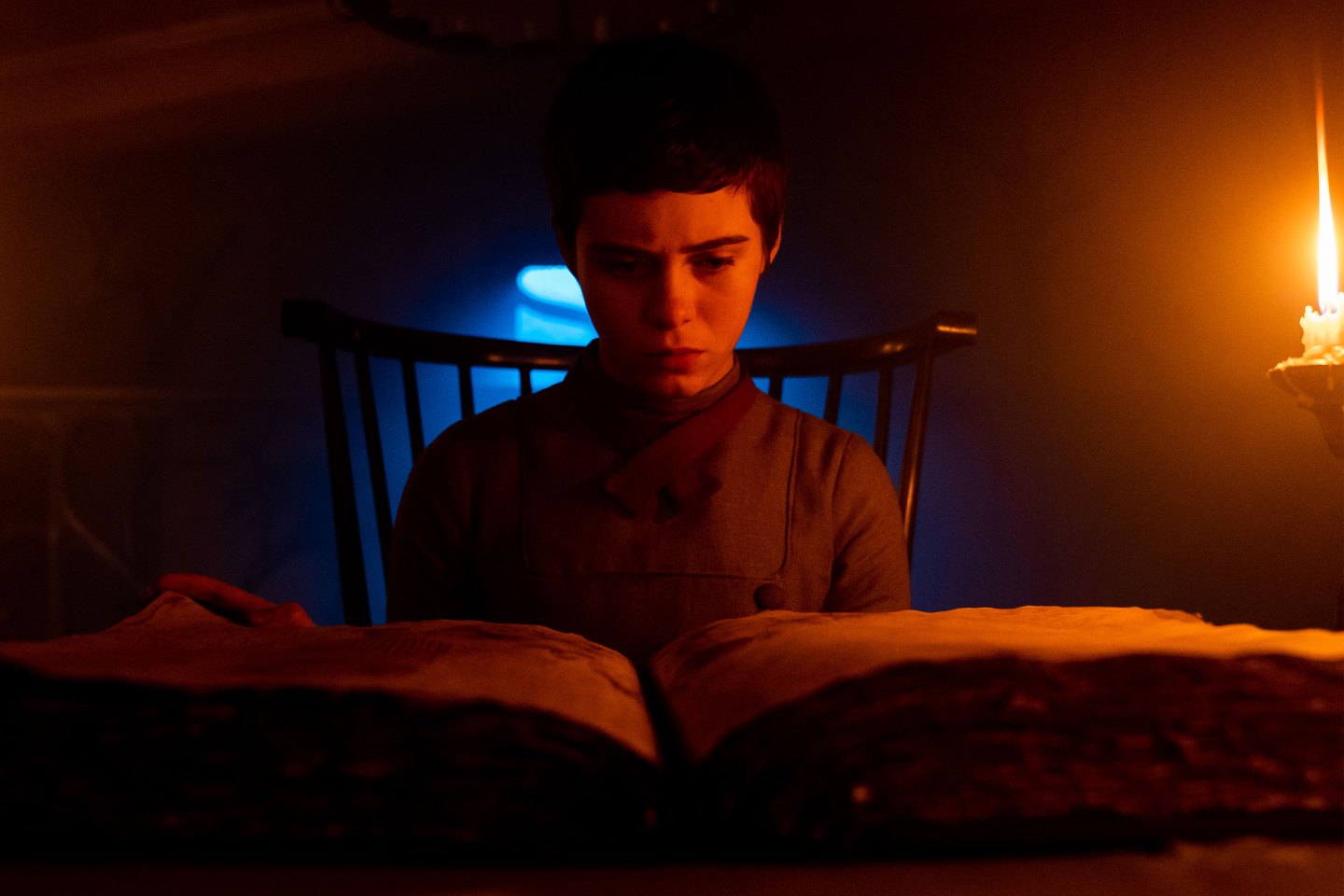 The films of director Osgood “Oz” Perkins are fractured fairy tales—eerie and richly atmospheric examinations of loss and abandonment that exist in a state of heightened unreality.

In 2015, Perkins—the son of Psycho star Anthony Perkins—arrived on the festival circuit with The Blackcoat’s Daughter, a chilling tale set at an upstate New York boarding school that depicted the horrors two Catholic schoolgirls encounter after getting left behind for a weeklong break. His follow-up (officially released first) was Netflix’s I Am the Pretty Thing That Lives in the House, a ghost story in which a nurse struggles to care for an aging, dementia-afflicted horror novelist in her home.

To craft his third film, this week’s Gretel & Hansel, he partnered with the British playwright Rob Hayes (marking Perkins’s first collaboration with a cowriter) and drew from the well of Grimms’ Fairy Tales.

But even with that classic tale of two children lost in the woods at the dark heart of his film, Gretel & Hansel bears Perkins’s trademarks: foreboding atmosphere, Gothic visuals, and a focus on complex female characters—here, Gretel, played by It’s Sophia Lillis, and the witch, played by Alice Krige—finding their way in a dark world.

Gretel & Hansel is your first film based on a pre-existing property. What drew you to it?

That’s what seems to be the most compelling for audiences these days—the alchemical mix of something very familiar with a new lens. That relationship is proving to be really good magic for everybody, whether it’s Todd Phillips, Martin Scorsese, or me. Bringing the old stuff back and polishing it up, giving it a new life. When the script first came to me, what was most appealing to me was that it was the original story. It wasn’t some apologist, revisionist bullshit. There was this honorable bravery that the original screenwriter [Rob Hayes] was employing to say, “Let’s just do the fairy tale—it’s good enough, isn’t it?” And of course it was good enough. It’s been powering people’s fantasies and nightmares for hundreds of years.

Your title swaps the traditional placement of the characters, and your film also focuses more on Gretel, played by Sophia Lillis. But that’s not that surprising to me, given the female protagonists of The Blackcoat’s Daughter and I Am the Pretty Thing That Lives in the House. As a male director, what appeals to you about telling stories from a female perspective?

I don’t want to sound craven about it, but it’s especially useful for me as an author and director to pass everything through a female protagonist. It keeps me in a place of mystery, of wondering, of not fully being able to see clearly what’s happening. It adds a layer of darkness, frankly—and I don’t mean in the negative sense, but in the sense that you can’t see. If I had male protagonists, I wonder if my films would start to feel overly familiar, borderline smug at times. Using a female protagonist keeps me walking on eggshells; it keeps me spry and on my toes, and my willingness to explore is always heightened.

And with Gretel & Hansel, that exploration turns a fairy tale into this feminist coming-of-age story.

Fairy tales are so often instructions on how to live, what you can become. They’re about telling kids, “Look, the world is a lot of things, and some of the things the world is aren’t so great.” There’s the idea that coming of age is really about coming into your relationship with the world. To have a woman put in a situation where she’s tasked to evolve, to find her own power, seems like a really ripe, fertile place to start a story from.

In expanding the original Grimms’ fairy tale as you do, the witch (Alice Krige) has more complex motivations for luring children into her woodland abode. How did you crack that character?

The screenwriter and I insisted from the beginning the witch could not be some cardboard-cutout element standing in for something obliquely defined as evil. For me, I believe the villain is always the star of their own sad story; a villain is just a broken person who’s coping in a destructive way. Looking from the inside out, we wanted to know what her pain was about, what drove her to do all this. Villains who rub their hands and leer… I don’t even know what that is. This witch is luring children, murdering, and eating them. That’s a really painful place to be in. Nobody wants to be doing that, like no heroin addict really wants to be addicted to heroin. We had to find the source of her pain and then build outward. Alice Krige, being such a brilliant actress with careful control of her instrument, is able to bring all that pain into her physicality.

I’m curious how much you as a director think into the psychology of your visuals. Gretel & Hansel, like The Blackcoat’s Daughter and I Am the Pretty Thing, makes such effective use of architecture, with shadowy basements filled with secrets and striking, almost runic structures looming around the characters.

When it comes to this movie specifically, I felt we owed it to contemporary audiences and the original source material to adhere to the basic narrative but then give it our own, personalized feeling, so that it was our world and only our world. One of the charms of fairy tales is that they don’t care what else is going on in the world. There’s no context. It’s just what’s in front of the characters and at hand. We wanted to make a world that was entirely our own. I will say I wouldn’t know how to make a movie in which spaces weren’t vital. It’s like saying it doesn’t matter where you live or walk every day. Our environments are so impactful. When you’re given something as wide-open as the enchanted world of a fairy tale, everything’s essentially possible. We early on decided there was no [established] time [period], country, or context. It gave us the freedom to be expressive and expressionistic, and to harness the fact that not only are fairy tales like that but the horror genre is as well. It’s the genre most without rules and boundaries.

The witch’s house has this geometric, oddly triangular design. Where did that come from?

It’s funny. Triangles come from wherever they come from. (Laughs) That is to say that if you’re lucky and alert, the collective unconscious of the universe will send you messages. David Lynch goes into a lot of details about this in his books, describing how his designs come out of his meditations. It’s all out there, if you look for it and recognize that. The director’s job is to say yes and no to specific things, and to be open to what’s right. The shape of the triangle is this archetypal, elemental, highly suggestive shape, and it means a million things to everybody differently. It’s in step with the mysticism of the occult, of what we understand symbolically but not literally. It’s just this delicious touchstone that everyone has an opinion about. And you introduce that into the unconscious of the movie, thus encouraging everyone’s unconscious to be a part of it.

Your past work was on the independent film circuit but, given how heady some of what you’re talking about here is, what was it like working in a more mainstream studio setting with Orion Pictures and MGM?

I feel like it should have been harder. Or maybe it was harder, for the producers. But it never got to me. The good news was that our taste was good, our imagery was good, and so we were able to get away with a lot of left-of-center stuff. Studios have this mandate to please everybody but often realize that, in the attempt to please everybody, you please nobody. What was gratifying for me with MGM and Orion is that they were willing to go there with all the stuff I wanted to do. They never said, “You can’t do that.” We did some wild stuff. Just the fact that the movie shot in 1.55:1 aspect ratio and is more square than wide, and the fact that a major studio would tolerate that—never mind support or enthusiastically support that—was a real boon. Mine was a vision that was not typical.

You’re held up as part of this new wave of “art horror” directors. What horror movies have influenced you lately?

To be honest, I either avoid the movies made by my contemporaries, because it will almost impact me and throw me off in a weird way. I acknowledge that’s a vulnerability of mine. But I try to watch the oldest-possible movies I can. I’d rather watch the original Cat People or Cronenberg movies. Things that are not current feel much more romantic to me. Then there’s something like Let the Right One In, this beautiful marriage of sadness and horror that strikes me as particularly beautiful. If it was up to me, I’d be making black-and-white horror movies.

—In the age of Twitter, seconds-long streaming delays can make or break live entertainment
—American Factory directors on capturing what “globalization looks like on a human scale”
—In the Dark podcast host Madeleine Baran on Curtis Flowers’ release, season three, and more
—The Grammys remain more of the same even amid calls for change
—Taika Waititi on Kiwi humor, directing as Hitler, and why kids should see Jojo Rabbit
Follow Fortune on Flipboard to stay up-to-date on the latest news and analysis.