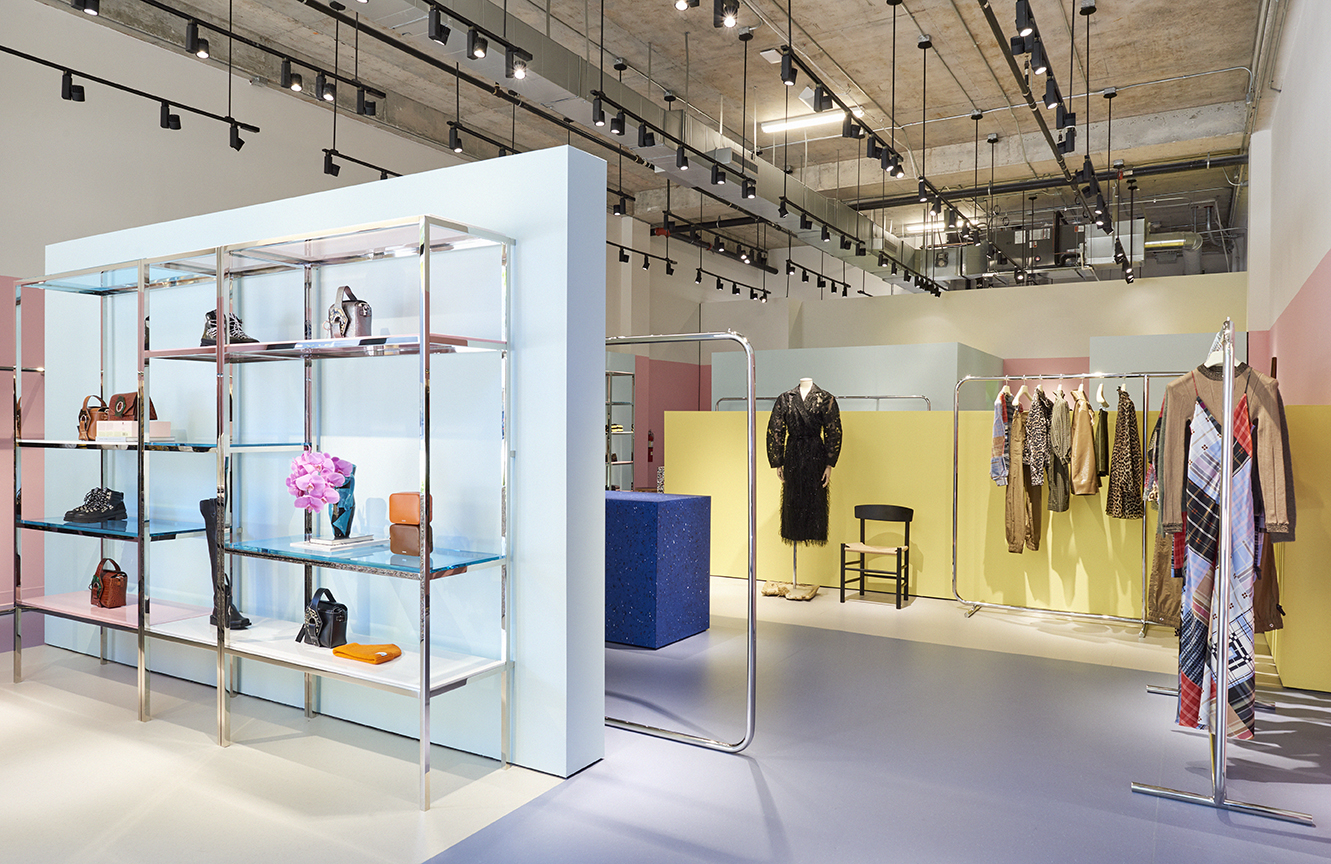 Ganni held its first runway show nearly 10 years ago. It was a hot day on the grounds of a shabby Copenhagen hotel. “It was owned by a flamboyant businessman who had a tennis court in the backyard, so we had the show there,” recalls the brand’s cofounder Nicolaj Reffstrup. “I remember thinking, ‘Oh, my God, this is going to be so embarrassing.’”

As the story goes, people showed up and liked what they saw. That one moment led to a string of moments that have helped turn Ganni into a global fashion phenom, with the likes of Rihanna, Kendall Jenner, and Gigi Hadid wearing the brand and more than 39,000 organic #gannigirl posts on Instagram. In just shy of a decade, the little-known Danish label has opened its first three U.S. stores. New York and L.A. debuted nearly simultaneously in October, and Miami opened during the first week of December, during Art Basel. Over the past three years, the Copenhagen-based company has seen 50% growth in revenue year over year. The company is estimating more than 30% growth from 2018 to 2019, with projected sales of more than $88 million for 2019. It’s also on a secret mission to save the environment, launching an ambitious carbon-neutral capsule collection endorsed by the United Nations.

Breaking the stereotypes of Scandi fashion

The brand, run by husband and wife team Nicolaj and Ditte Reffstrup, initially started with cashmere only and is described by its owners as “design-led with an honest price point” (a sweater or dress may range from $200 to $500, while some items may be as low as $100 and others approach $1,000). It has evolved over time, leaning into its Danish roots by pairing feminine dresses with tennis shoes and moto jackets, and bright florals with animal prints and stripes; it also brings to the fashion industry a refreshing approach to doing business. Nicolaj had spent 10 years in tech and launched a chat-based startup (he quips that he was “was probably $3 billion short and 10 years too early.”) His wife, Ditte, meanwhile, was working as a fashion buyer and began to dream up her own take on Scandinavian fashion. A friend named Frans Truelsen owned a small gallery in Copenhagen and had started a tiny cashmere brand on the side. That was really how Ganni first began. It sparked something in the couple’s fantastically disparate, yet complementary backgrounds and in 2009 the couple took over the business. (Truelsen exited in 2013.) “I just couldn’t see myself reflected in the minimal-androgynous, or bohemian Scandi style that were the two stereotypes of Scandinavian fashion when we started,” says Ditte. “We’re something else—a Scandi 2.0, if you will. We have a heritage that has managed to democratize design without compromising quality or aesthetics.”

As for Nicolaj, he was interested in a fashion company, but with one condition: “I knew most Scandi brands didn’t make it out of the country. This needed to be an international brand.” Kayla Marci, a market analyst at Edited, notes that Ganni is now almost instantly recognizable among the global fashion set. She attributes that to the company’s seemingly effortless word-of-mouth momentum. “What differentiates the brand is their community-driven social strategy,” says Marci. “The brand’s popularity has grown organically via word of mouth and leveraging the #gannigirls. It has its own group of influencers without the brand needing to do any paid partnerships.”

The Danish brand is run by husband and wife team Nicolaj and Ditte Reffstrup.
Courtesy of GANNI

While Nicolaj credits Ditte’s edgy yet whimsical aesthetic as the source of the brand’s resonance with customers, CEO Andrea Baldo is most taken with the way that message is coupled with Nicolaj’s tech background and the context it throws on day-to-day operation. “There is something in the way we operate that makes us faster than others,” says Baldo, who has been with Ganni just one year and whose fashion industry tenure spans brands such as Coccinelle, Diesel, Margiela, and Marni. “We operate in sprints and think digitally. When we start any conversation on any problem or idea, we always look to see if there is a digital patch or hack that can allow us to move faster. We are a fashion brand with a digital mindset. Technology and sustainability are in everything we do.”

Ganni’s beautifully appointed shops seem to have appeared out of nowhere in New York’s SoHo and Miami’s design district. But Nicolaj characterizes the company’s growth as controlled and organic. Investors include the Reffstrups’ friend Frans Truelsen, a gallery owner, and L Catterton, which bought a majority stake of the business in 2017. Consultant and fashion industry pro Julie Gilhart has unofficially worked with the brand off and on since the Reffstrups took the reigns. She’s a close friend of Nicolaj and is most taken by the Reffsttrup’s focus on building a global community beyond the brand. “To be a brand based in Copenhagen has a certain allure right now in fashion,” says Gilhart. “Part of this Copenhagen trend is due to the major influence of Ganni. Ditte and Nicolaj make an interesting duo, considering Ditte’s background in buying and retail and Nicolaj’s experience with tech entrepreneurship, paired with studies in philosophy. They keep a close eye on what is selling and then apply that knowledge to their design process. They were early adopters of social media, using Instagram and strategic micro-influencers as a way to reach a global customer outside of their Scandinavia community.”

The 100-person team at Ganni is constantly taking the pulse on story line, but it’s data that drives decisions such as what markets make sense, what brands the company wants to share shelf space with, what materials make Ganni more sustainable or lessen their environmental footprint. Nicolaj says the Ganni process comes in the form of “scrum and sprint.”

For example, in meetings, every person gets exactly two minutes to talk about something he or she is working on. As issues are identified in these tiny elevator speeches, smaller groups of two or three break off from the meeting to brainstorm and work through the issue. “We make sure we listen to everyone,” says Ditte. “And the best idea wins. Not the right idea from the best person.” Nicolaj credits their ability to hire talent above all else, even if that means looking outside the fashion industry. “There is this principle you have no more than eight people reporting to a manager,” says Nicolaj. “At Google, they’d turn that around and say at least eight people must report to a manager. You can’t micromanage that many people. You’re forced to hire people so talented, they can work independently.”

Of course, there’s something to the confluence of Danish culture and tech roots. “Being in Copenhagen, being dry and direct, there is no overcommunication and a lot of respect for private time,” Baldo says, noting that as a rule no meeting lasts more than 55 minutes. “We move very fast from concept to markup to design to production.” Baldo often jokes about his Italian roots in comparison, sharing that in his first week of work, Nicolaj gifted him a timer. “That was his way of saying, ‘Okay, you have to get accustomed to this.’” It isn’t uncommon, says Baldo, to meet with Ditte about a new idea—say, using a more sustainable fabric—find consensus before the meeting is through, and see that the following day things are already in motion to execute in production.

When it comes to so-called sustainable fashion, Ganni isn’t plastering its ambitious environmental goals on its website or Instagram feed. Instead, it seems a quiet, steady crusade for the brand. It shows up in small ways—the office mushroom farm, fertilized with leftover coffee grounds—but in bigger ways too. The brand has introduced Ganni Repeat, a rental service in Copenhagen. It enables customers to rent an unlimited number of pieces from past and present lines. They’ve also opened Ganni Postmodern, a concept shop in Copenhagen selling one-off samples and pieces from past seasons, and accept donations at their shops of clothing and materials customers no longer want or use in a program called Ganni Garment Take Back. Ganni will then recycle materials and use for new purposes.

The latest effort is Ganni Labs, a project supported by the United Nations, built to create an entirely carbon-neutral clothing capsule. “We see it as a test case to really learn as much as possible about the whole supply chain and find out how we can do things more responsibly,” says Baldo. “Our manifest is to work with some of the most commercial fabrics and styles in the collection, as these represent the bulk of our business, and see how we can improve our production on these, as well as trialing virtual reality showroom experiences: no samples and avatar dressing.” The idea, he says, is just as much about the process of making clothing as it is the end product. Ganni Labs aims to create as little environmental impact as possible in creating this capsule collection and use the process as a learning tool or “test collection” for how fashion may be produced in the future. Ganni also has committed to being completely carbon neutral by 2050.

A lofty goal, for sure. And a very long way from that first tennis court fashion show.

—25 ideas that will shape the 2020s
—USPS could privatize as early as next year
—UPS’s $20 billion bet on e-commerce is paying off
—Airbnb copes with a bad trip on the road to a 2020 IPO
—The Trump administration is targeting anti-Trump Facebook users
Subscribe to Fortune’s forthcoming Bull Sheet for no-nonsense finance news and analysis daily.