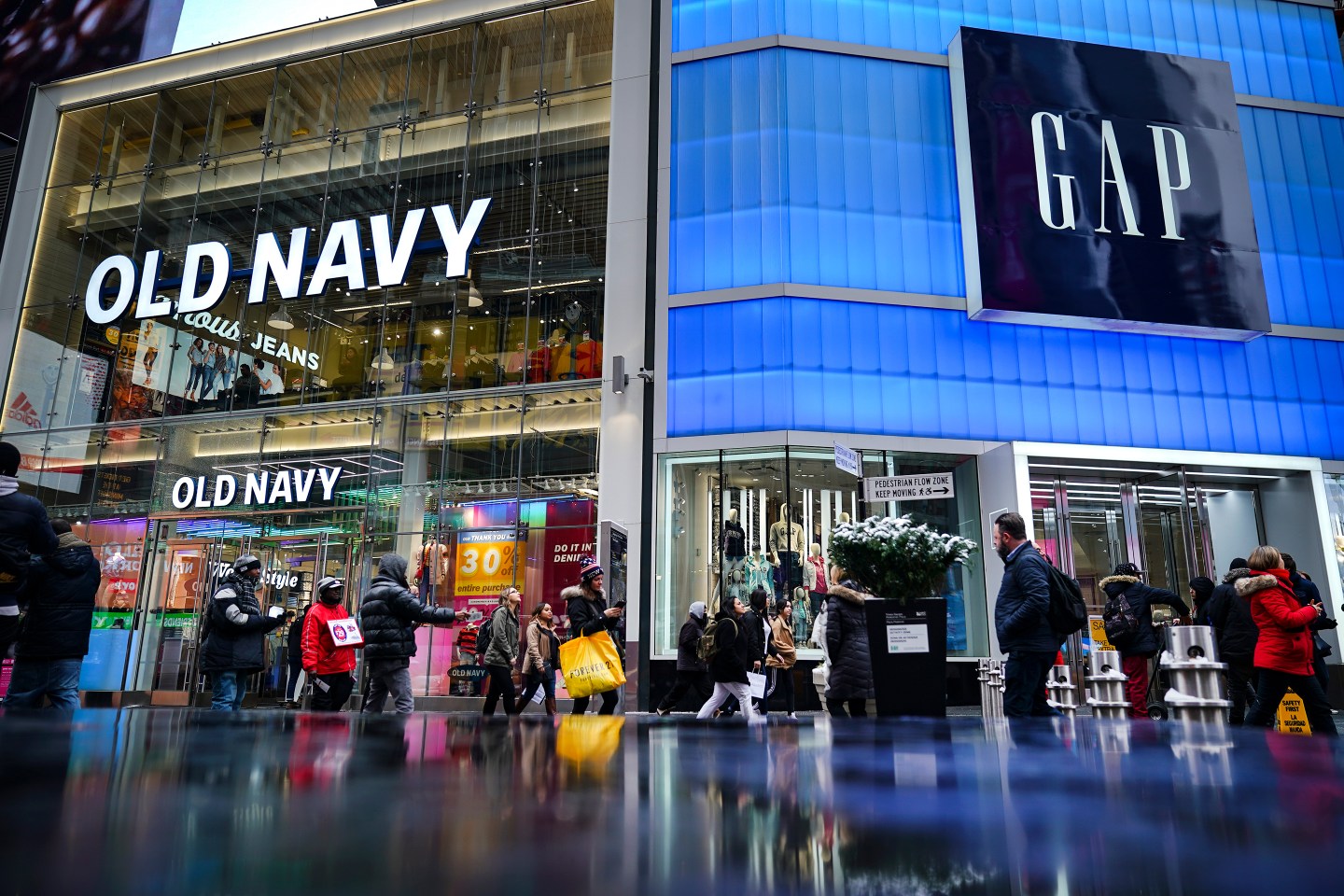 NEW YORK, NY - MARCH 01: Pedestrians walk past Old Navy and GAP stores in Times Square, March 1, 2019 in New York City. On Thursday, Gap Inc. announced plans to separate into two publicly traded companies, spinning off Old Navy into a separate firm as it closes about 230 Gap stores over the next two years. According to Gap Inc., Old Navy will become its own company, and the other company, which has not been named yet, will consist of the Gap brand, Athleta, Banana Republic, Intermix and Hill City. (Photo by Drew Angerer/Getty Images)
Drew Angerer—Getty Images

When Gap Inc. announced last February that it would spin off its massive Old Navy chain, shares rose 19%. But when the troubled apparel company said on Thursday it was calling off that plan, shares also rose.

The stock’s moves reflect just how badly Gap Inc.’s fortunes have deteriorated in the past year: Its flagship brand, Gap, continues to quickly decline; its CEO abruptly exited in November; and Old Navy, its biggest brand and until recently highly successful, is now in a slump. Shares last year rose as high as $31.39, but were trading at $18.03 Thursday before Gap announced its news.

The rationale for the spinoff had been that Old Navy, which generated almost half of Gap Inc.’s $16.6 billion in 2018, would flourish as a separate stock of a booming brand, not weighed down by the poor performances of Gap and Banana Republic. (Gap Inc.’s other bright spot has been Athleta, a Lululemon Athletica competitor it expects will soon hit the $2 billion sales threshold.)

But Old Navy, whose chief executive Sonia Syngal told Fortune last year she thinks the brand can hit $10 billion in sales within a few years and plans to add 1,000 stores, saw its comparable sales fall in each of the first three quarters of 2019 after years of fast growth, hurt by factors such as product misfires and the popularity of Target’s store brands. (Gap has long been a laggard, with only quarter of growth in the past five years.) Gap Inc. will report full fourth-quarter results on Feb. 27.

Gap was founded in 1969 in San Francisco, at first selling jeans from Levi Strauss & Co. and later starting its namesake brand that made it part of American culture. In the 1990s, it created Old Navy as a discount alternative to Gap and turned Banana Republic into the go-to chain for young adults seeking clothes for work and going out.

But more recently, the company has struggled with issues such as declining mall traffic, countless fashion missteps, and operational challenges. Old Navy, with its focus on fun, affordable clothing for the whole family, had for years been the exception, becoming the second largest apparel brand in the country after Nike.

Gap Inc. warned investors in September that the separation would create a one-time expense of between $400 million and $450 million and cost $300 million to $350 million in terms of capital over time as Old Navy built its own infrastructure, such as a technology platform. That, coupled with the poor sales results, made the spinoff seem more and more like expensive financial engineering rather than anything that would improve the brands, increasing the odds that the stocks of Gap Inc. and Old Navy would perform poorly. Wall Street recently had been clamoring for Gap Inc. to pull the plug on the plan.

Robert Fisher, interim CEO and son of Gap Inc.’s founders, said in a statement that “the cost and complexity of splitting into two companies, combined with softer business performance, limited our ability to create appropriate value from separation.”

What’s more, Gap Inc. had said that there would be “dis-synergies” from the split, given how many resources Old Navy and the rest of the company share in terms of buying fabrics, manufacturing facilities, and clout with landlords in negotiating rent.

The about-face, coupled with a number of executive departures (the CEO of Gap brand, Neil Fiske, is leaving the company, Gap said Thursday) and years of failed efforts to turn Gap and Banana Republic around, have created the sense of a distracted company adrift at a time of upheaval in apparel retail.

Still, there was a small glimmer of improvement in Gap’s announcement on Thursday: The company said comparable sales for 2019 would be at the higher end of its forecast, a forecast that nonetheless projected a sales decline. Gap Inc. also said its 2019 adjusted earnings would come in slightly above its previous outlook of $1.70 to $1.75 per share, crediting less discounting than expected at Old Navy during the holidays.

Fisher tried to put on a brave face about Gap Inc.’s 180-degree turn on a deal it had been hyping all last year, saying the preparation work for the spinoff had “shone a bright light on operational inefficiencies and areas for improvement.” He added: “We have learned a lot and intend to operate Gap Inc. in a more rigorous and transformational manner that empowers our growth brands.”

Gap Inc. investors have heard this multiple times before. But now, without a financial maneuver to distract anyone, the company can try to show that this time its pledge will amount to more than empty promises.