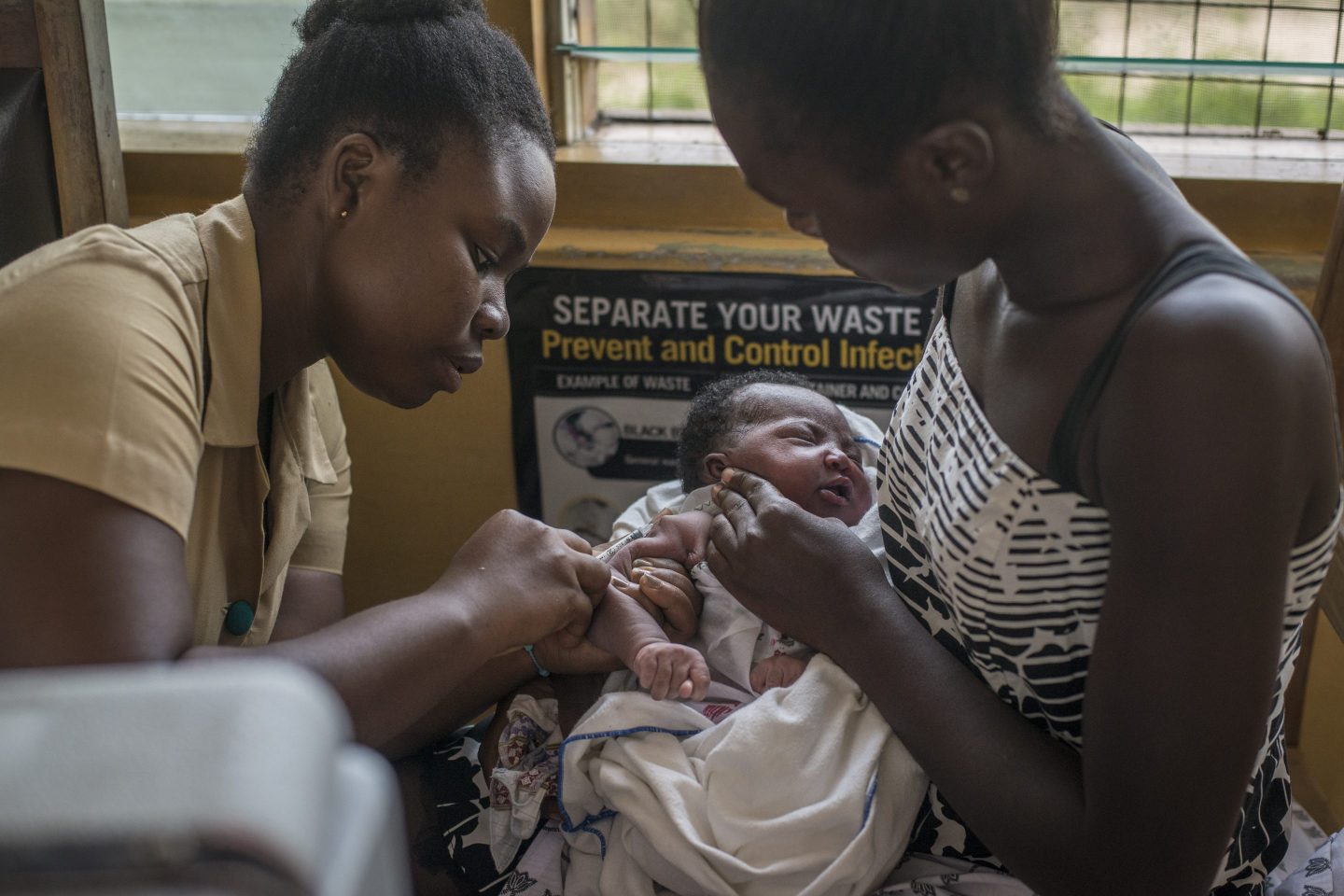 A nurse administers a vaccine to a child at Ewin Polyclinic in Cape Coast on April 30, 2019. - Ewim Polyclinic was the first in Ghana to roll out the Malaria vaccine Mosquirix. After Malawi, Ghana is the second country to launch the vaccine. Known by its lab initials as RTS,S but branded Mosquirix, the vaccine has passed lengthy scientific trials, which found it to be safe and reduced the risk of Malaria by nearly 40 percent. (Photo by CRISTINA ALDEHUELA / AFP) (Photo credit should read CRISTINA ALDEHUELA/AFP via Getty Images)
Cristina Aldehuela—AFP/Getty Images

A pinch in the leg, a squeal, and a trickle of tears. One baby after another in Malawi is getting the first and only vaccine against malaria, one of history’s deadliest and most stubborn of diseases.

The southern African nation is rolling out the shots in an unusual pilot program along with Kenya and Ghana. Unlike established vaccines that offer near-complete protection, this new one is only about 40% effective. But experts say it’s worth a try as progress against malaria stalls: Resistance to treatment is growing and the global drop in cases has leveled off.

With the vaccine, the hope is to help small children through the most dangerous period of their lives. Spread by mosquito bites, malaria kills more than 400,000 people every year, two-thirds of them under 5 and most in Africa.

Seven-month-old Charity Nangware received a shot on a rainy December day at a health clinic in the town of Migowi. She watched curiously as the needle slid into her thigh, then twisted up her face with a howl.

“I’m very excited about this,” said her mother, Esther Gonjani, who herself gets malaria’s aches, chills, and fever at least once a year and loses a week of field work when one of her children is ill. “They explained it wasn’t perfect, but I feel secure it will relieve the pain.”

There is little escaping malaria—“malungo” in the local Chichewa language—especially during the five-month rainy season. Stagnant puddles, where mosquitoes breed, surround the homes of brick and thatch and line the dirt roads through tea plantations or fields of maize and sugar cane.

In the village of Tomali, the nearest health clinic is a two-hour bike ride away. The longer it takes to get care, the more dangerous malaria can be. Teams from the clinic offer basic medical care during visits once or twice a month, bringing the malaria shot and other vaccines in portable coolers.

Treating malaria takes up a good portion of their time during the rainy season, according to Daisy Chikonde, a local health worker.

“If this vaccine works, it will reduce the burden,” she said.

When she heard about the vaccine, Ephrem said her first thought was “protection is here.” Health workers explained, however, that the vaccine is not meant to replace antimalarial drugs or the insecticide-treated bed net she unfolds every night as the sun sets and mosquitoes rise from the shadows.

“We even take our evening meals inside the net to avoid mosquitoes,” she said.

It took three decades of research to develop the new vaccine, which works against the most common and deadly of the five parasite species that cause malaria. The parasite’s complex life cycle is a huge challenge. It changes forms in different stages of infection and is far harder to target than germs.

“We don’t have any vaccines against parasites in routine use. This is uncharted territory,” said Ashley Birkett, who directs PATH’s Malaria Vaccine Initiative, a nonprofit that helped drugmaker GlaxoSmithKline develop the shot, brand-named Mosquirix.

The bite of an infected mosquito sends immature parasites called sporozoites into the bloodstream. If they reach the liver, they’ll mature and multiply before spewing back into the blood to cause malaria’s debilitating symptoms. At that point, treatment requires medicines that kill the parasites.

Mosquirix uses a piece of the parasite—a protein found only on sporozoites’ surface—in hopes of blocking the liver stage of infection. When a vaccinated child is bitten, the immune system should recognize the parasite and start making antibodies against it.

Scientists also are searching for next-generation alternatives. In the pipeline is an experimental vaccine made of whole malaria parasites dissected from mosquitoes’ salivary glands but weakened so they won’t make people sick. Sanaria Inc. has been testing its vaccine in adults, and is planning a large, late-stage study in Equatorial Guinea’s Bioko Island.

And the U.S. National Institutes of Health soon will start initial tests of whether injecting people periodically with lab-made antibodies, rather than depending on the immune system to make them, could offer temporary protection during malaria season. Think of them as “potentially short-term vaccines,” NIH’s Dr. Robert Seder told a recent meeting of the American Society of Tropical Medicine and Hygiene.

For now, only babies in parts of Malawi, Kenya, and Ghana are eligible for the Mosquirix vaccine. After the vaccine was approved in 2015, the World Health Organization said it first wanted a pilot roll-out to see how well it worked in a few countries—in real-world conditions—before recommending that the vaccine be given more widely across Africa.

“Everyone is looking forward to getting it,” said Temwa Mzengeza, who oversees Malawi’s vaccine programs. Those eager for the shots include her husband, whom she had to stop from trying to get them, she said.

Mzengeza used to come down with malaria several times a year until she started following her own advice to sleep under a net every night. Unlike many other kinds of infections, people can get malaria repeatedly, building up only a partial immunity.

In the pilot program that began last year, 360,000 children in the three countries are meant to be vaccinated annually. The first dose is given at about age 5 months and the final, fourth booster near the child’s second birthday.

Experts say it is too early to know how well the vaccine is working. They’re watching for malaria deaths, severe infections, and cases of meningitis, something reported during studies but not definitively linked to the vaccine.

“To do something completely new for malaria is exciting,” said researcher Don Mathanga, who is leading the evaluation in Malawi.

The rainy season has brought new challenges, making some rural roads impassable and complicating efforts to track down children due for a shot. So far in Malawi, the first dose reached about half of the children targeted, about 35,000. That dropped to 26,000 for the second dose and 20,000 for the third.

That’s not surprising for a new vaccine, Mzengeza said. “It will pick up with time.”

At the health clinic in Migowi in Malawi’s southern highlands, workers see signs of hope. Henry Kadzuwa explains the vaccine to mothers waiting at the clinic. He said there was a drop in malaria cases to 40 in the first five months of the program, compared to 78 in the same period in 2018.

Even though he wishes his 3-year-old daughter, Angel, could receive the vaccine, “it’s protecting my community. It also makes my work easier,” Kadzuwa said. The Migowi area has one of the country’s highest rates of malaria, and a worn paper register in the clinic’s laboratory lists scores of cases.

At the clinic, Agnes Ngubale said she had malaria several years ago and wants to protect her 6-month-old daughter, Lydia, from the disease.

And she has memorized the time for Lydia’s second dose: “Next month, same date.”

—25 ideas that will shape the 2020s
—Why it’s time for a futures market in health care
—What we can learn from the man who tried to sell the Eiffel Tower—twice
—Food-delivery services feeling pressure to finally turn a profit
—Disney is ready to roll out new ‘Star Wars’ sagas as one story ends
Subscribe to Fortune’s forthcoming Bull Sheet for no-nonsense finance news and analysis daily.