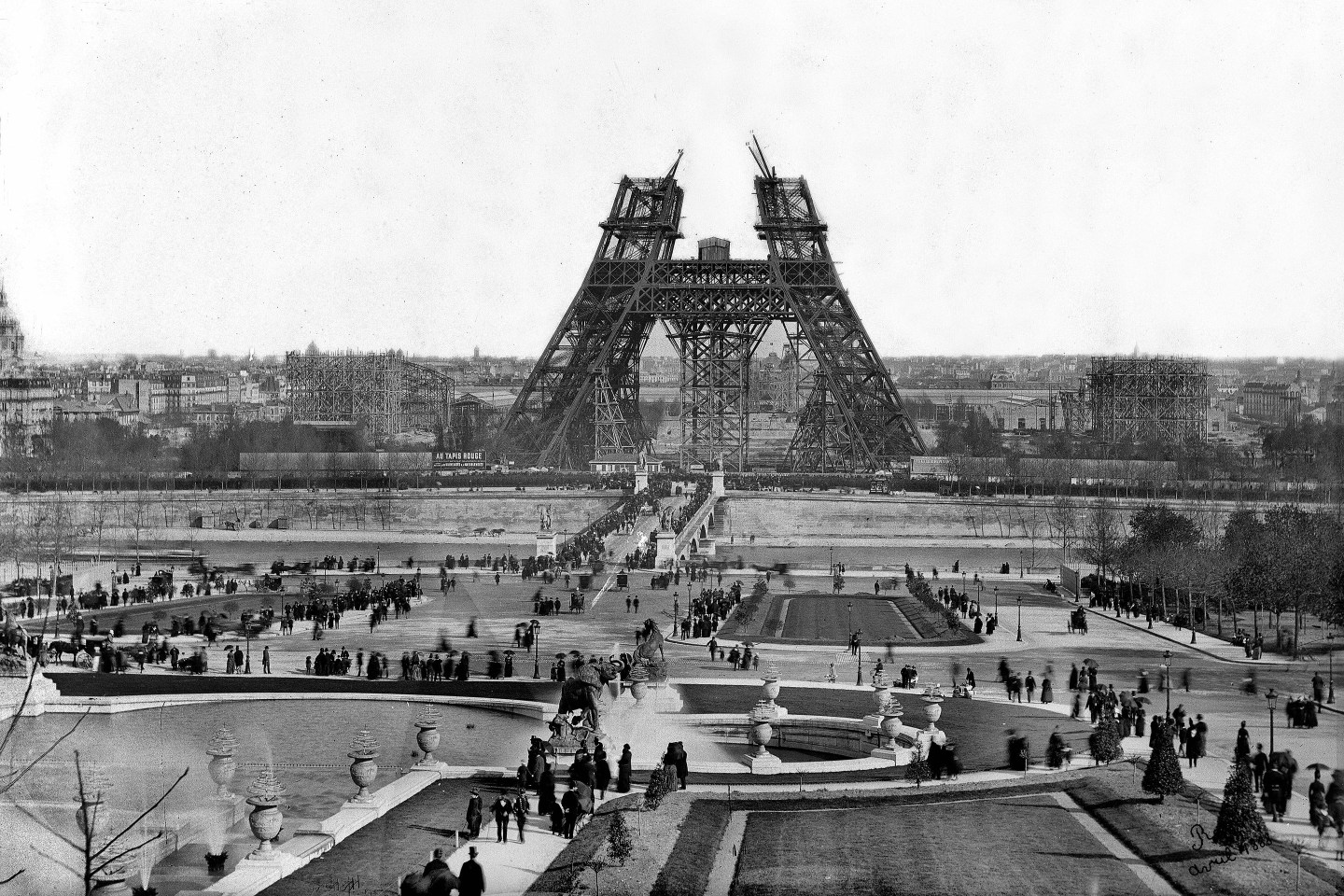 The Eiffel Tower is one of the most recognizable and well-trafficked monuments in the world. It’s estimated that each year more than 6 million visitors wait in long lines to experience this gorgeous landmark. It may be hard to believe, but when it was built the tower was subject to ridicule and was only supposed to stand for 20 years before being disassembled.

Gustave Eiffel designed his namesake tower for the 1889 World’s Fair in Paris. No one had ever built a structure so tall before, so the fact that it was erected in just over two years is a technical feat that was unparalleled at the time. Naysayers told Eiffel the tower would be impossible to build. The wind would make it too dangerous for people to ascend to such heights, and the government wasn’t keen on spending an estimated $1 million on the project. Eiffel’s contract stipulated that the tower would be allowed to stand for 20 years to be able to earn enough of a profit to make it worthwhile, at which point the erector set–like structure would be taken down piece by piece.

The engineering and construction involved required an incredible amount of precision. The iron plates used to build the tower would have stretched 43 miles long if they were laid end-to-end and called for over 7 million holes to be drilled into them. The iron used to construct the tower weighed over 7,000 tons and required more than 60 tons of paint. Each piece was traced out to be accurate within a tenth of a millimeter. Including the flagpole at the top, the Eiffel Tower reached 1,000 feet in height when it was finished.

Although the tower was more beautiful than most could have imagined, it was initially panned by critics. Many of France’s leading artists and intellectuals derided the tower, calling it “a truly tragic streetlamp” and an “iron gymnasium apparatus, incomplete, confused, and deformed.” The Americans and Brits weren’t fans either, mostly because they were jealous. The New York Times called it “an abomination and eyesore.” Editors at the Times of London referred to it as a “monstrous erection in the middle of the noble public buildings of Paris.” Americans didn’t appreciate how the Eiffel Tower surpassed the Washington Monument as the tallest man-made structure at that time. Once it was completed even the most ardent critics eventually came around to the fact that it was a masterpiece, yet the government still wasn’t positive it would keep the structure in place forever. In the years after the tower was built it began to fall into disrepair. It was costing the city a fortune in maintenance and upkeep.

A man by the name of Victor “The Count” Lustig saw this situation as an opportunity to profit from the uncertainty surrounding the future of this magnificent monument. Lustig decided he would sell the Eiffel Tower to the highest bidder, not once but twice.

The plan to sell the Eiffel Tower

Lustig was a career con artist who had up to 45 different aliases. No one knows what his real name was or even where he was born. Following a short career as a gambler, Lustig transitioned into full-time scam artistry after getting to know how the wealthy class operated. His main scams centered on counterfeiting money, but he even took notorious gangster Al Capone for $5,000 in a financial fraud involving overgenerous promises of an investment opportunity that didn’t exist. After the authorities were on his trail in the U.S., Lustig went to Paris to pull off his pièce de résistance.

When he arrived, there were many stories in the local papers about the dilapidated state of the famous Eiffel Tower. A light bulb went off in Lustig’s head. He set about creating a fake government role for himself, complete with his own stationery and business cards done up with an official French seal. There was even an official-sounding, yet completely made-up title: “Deputy Director General of the Ministry of Posts and Telegraphs.” He set up shop at the Hôtel de Crillon, a stone palace on the Place de la Concorde. The biggest scrap metal dealers in town were summoned to the luxurious hotel for a secret business proposal.

“Because of engineering faults, costly repairs, and political problems I cannot discuss, the tearing down of the Eiffel Tower has become mandatory,” he reportedly told this group in a quiet hotel room. The Count then shocked the small group of metal dealers by announcing the Eiffel Tower would be sold to the highest bidder. Many at the table were in disbelief, but Lustig assured them if the government was able to turn a profit on the deal, it would minimize the protests from citizens. There were 2.5 million rivets used in its construction. The 1,000-foot-tall structure contains more than 7,000 metric tons of iron, along with 2.5 million rivets that hold it together, so these scrap metal dealers could calculate the sale of this amount of metal would net a fortune for those who tore it down and sold off the parts. To make the process more believable, the dealers were even taken on a tour of the monument to give them a better sense of the scale of the operation.

Bids were due by the next morning along with the promise of complete secrecy from those involved. Lustig told his marks the government didn’t want word to get out for fear of a public outcry against tearing it down. Although he took bids from all interested parties, the patsy was picked out well in advance. Andre Poisson was relatively new to the area and trying to make a name for himself. What better way to make a name for yourself than by winning the biggest scrap metal project in the country’s history? A few days later Lustig informed Poisson his offer of 250,000 francs (roughly $1 million today) was in fact the winning bid. Once he learned he had won, Poisson grew wary of the whole operation. So to seal the deal, Lustig demanded a bribe for securing the transaction. Everyone assumed all Parisian government officials were corrupt, so the bribe was the final nail in the coffin to make it seem legit. Poisson was in.

Lustig secured the cash and handed over the “official” paperwork to finalize the sale. After a number of failed attempts to claim possession of the Eiffel Tower, Poisson finally realized he’d been swindled. By this point, Lustig had already fled the country. But a funny thing happened as he awaited a news story about the man who tried to sell the Eiffel Tower—the story never came. Lustig was initially befuddled, but eventually realized Poisson was so embarrassed about being taken advantage of that, to save face, he’d never bothered telling the authorities. Never one to rest on his laurels, Lustig decided to test his good fortune by going back to Paris to try selling the Eiffel Tower a second time! This time he wasn’t quite so lucky. The potential buyer went to the police before handing over the money, and Lustig was forced to flee the country yet again.

Everyone is in sales

Victor Lustig talked people into things because he was a master manipulator with a huge ego. But he also understood people and utilized the soft skills of trust and persuasion as well as anyone. Never one to be shy about his own accomplishments, Lustig even penned a list: the Ten Commandments of the Con. Numbers three and four on the list show how eager he was to get in the good graces of his marks:

Wait for the other person to reveal any political opinions, then agree with them.

Let the other person reveal religious views, then have the same ones.

Trust is a huge component of the sales process because we prefer doing business with likable, trustworthy people. When our ancestors were in small tribes and villages, the people around us were those we trusted the most, so our brains are hardwired to be more comfortable with people who seem trustworthy. Unfortunately, this is a double-edged sword as the people who often seem the most trustworthy are also the ones who possess the ability to take advantage of you.

The business world or financial markets would never function as smoothly as they do if there wasn’t an element of trust involved. Those with good people skills and the ability to sell will almost always have a leg up on the competition because they can use their persuasive powers. However, those powers can be used for good or evil.

This piece was adapted from the book Don’t Fall for It: A Short History of Financial Scams by Ben Carlson.

—Forget policymakers. Greta Thunberg and her allies are targeting CEOs
—Investors see a 2020 recession coming—but think they’ll make money
—The Carlos Ghosn affair: A look inside the motivations of a fugitive CEO
—Laws meant to close down tax havens and shut loopholes could have opposite effect
—What a $1,000 investment in 10 top stocks a decade ago would be worth today
Subscribe to Fortune’s forthcoming Bull Sheet for no-nonsense finance news and analysis daily.