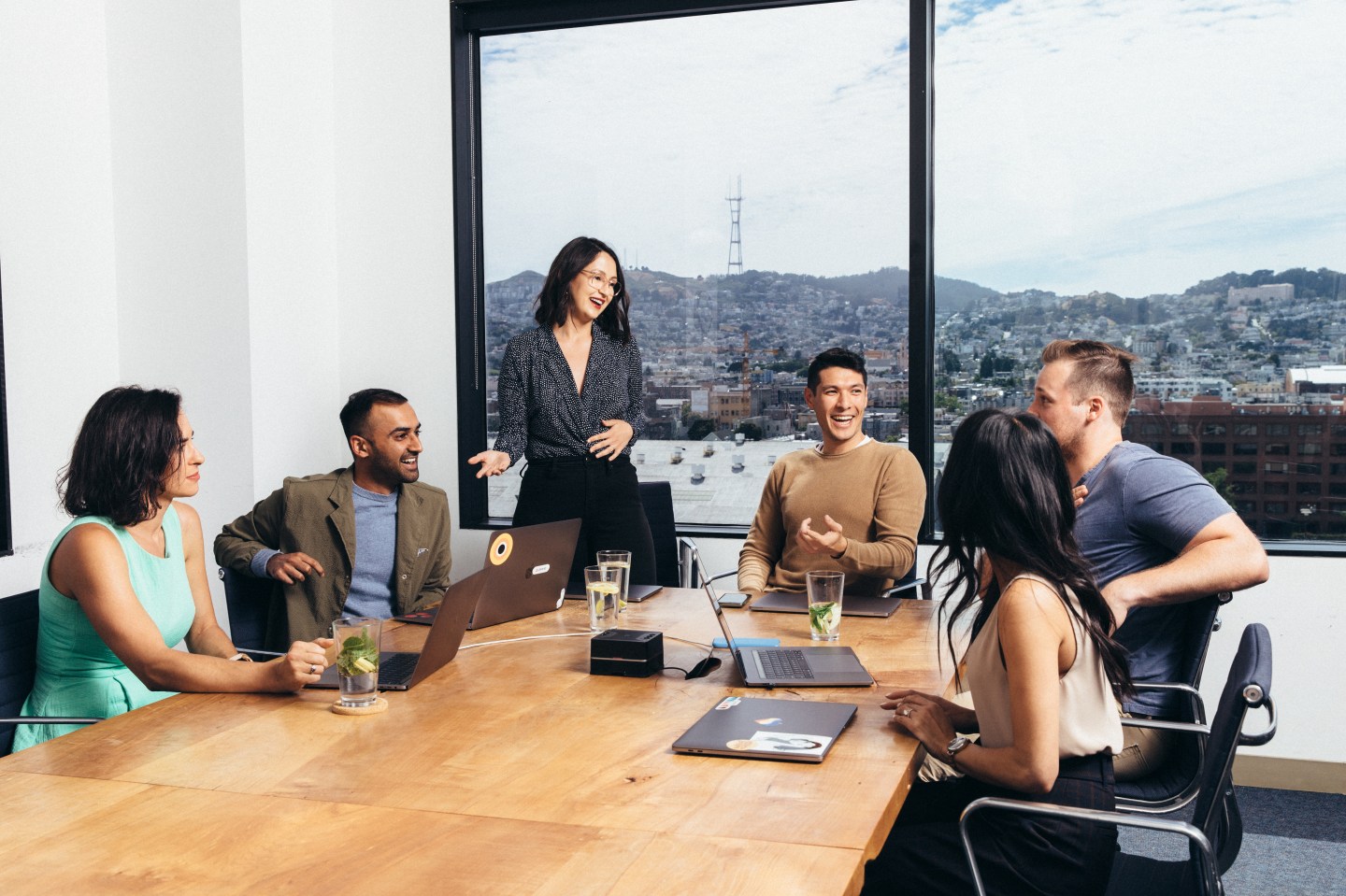 Don’t call it a war for talent.

Call it a quest to attract excellent people who thrive in your culture and want to stay.

Whatever you call it, the Best Workplaces in the San Francisco Bay Area are succeeding. They are recruiting highly skilled, energized employees, who then remain at their jobs even though they easily could hop to other firms amid one of the tightest labor markets in the country today. (See also: The Best Small and Medium Workplaces in the Bay Area.)

Anna Binder, head of people at work management software maker Asana, dislikes the war metaphor when it comes to talent management. Binder says it is overblown and off-base, given that it is always hard to hire the very most talented engineers, marketers, salespeople and other professionals.

Her strategy is to make Asana a place where work matters for each employee, and where every person feels a deep sense of belonging. To these ends, one of Asana’s secret weapons—er, magnetic qualities—is that the company is committed to decentralized decision-making. By giving people at all levels of the company real power over an aspect of the business, it’s easy for employees to see how their work ties into the broader company mission. The distributed approach to authority also allows employees to bring their passions into their professional life.

Binder says Asana’s “areas of responsibility” system makes the company stand out from other fast-growing tech companies where junior staffers may have to wait years before they have the kind of say they enjoy at Asana.

“It’s a huge draw for early-in-career talent,” Binder says. “Particularly in the product-development domain, this is a big deal—to own your corner of the sky.”

Binder says Asana’s turnover overall is about a third less than that at other high-growth companies in the Bay Area, and its “regrettable” attrition is in the single digits.

To determine the 2020 Best Workplaces in the Bay Area, Great Place to Work analyzed anonymous survey feedback from more than 33,000 Bay Area employees. Employees responded to survey questions describing the extent to which their organization creates a Great Place to Work For All — that is, a culture where every employee has a consistently great experience, no matter who they are or what they do for the company. Great Place to Work’s analysis considers an organization’s size, workforce makeup, and what’s typical in their industry and in the Bay Area. The ranking also assesses employees’ daily experiences of innovation, the company’s values, and the effectiveness of their leaders.

Status as a Best Workplace in the Bay Area is a feather in the cap of companies working hard to find and hold on to talent. One of the foremost technology hubs in the world and home to Silicon Valley, the San Francisco Bay Area is experiencing strikingly low unemployment. The jobless rate in San Francisco and San Mateo counties was 1.9 percent in October 2019, down from 2.2 percent the previous year. That 1.9 percent is much lower than the national unemployment rate of 3.3 percent.

Some say a job market this tight makes for fierce battles for talent.

But like Asana’s Anna Binder, Shane Metcalf of employee development software firm 15Five would prefer to kill the talent war talk. It’s not about fighting other firms so much as it is about cultivating an employee experience that people can’t resist, suggests Metcalf, chief culture officer of San Francisco-based 15Five. “We are obsessed with building a powerful culture not only because it produces superior business results and has virtually eliminated undesired attrition, we build a world-class culture so that we can attract world-class talent,” he says.

It seems to be working at 15Five, which now employs about 200 people. In its eight years of operations only five people voluntarily have left the company. Only 2 of those departures were for other jobs, Metcalf says.

Developing the right leadership norms is critical for a strong, attractive culture, Metcalf says. Great Place to Work research has found that the most effective, inclusive leaders—whom we dub For All Leaders—have traits such as humility, the ability to build bonds of trust with and among team members, and a focus on a bigger purpose rather than immediate results. To ensure such leaders, organizations shouldn’t take a hands-off approach, Metcalf says.

“If you rely on the individual managers to lead their teams with emotional intelligence, vulnerability and compassion, you will get some lucky eggs and some rotten eggs,” he says. “You want to create such a strong cultural center of gravity that conveys “This is how we do it here” that it’s easier to identify the leaders who need some coaching on this and the ones who just need a high five for being more like Yoda and less like Superman.”

Metcalf and 15Five aren’t the only ones seeing the Man of Steel as an outdated management role model. More and more organizations are realizing that leaders who come across as invincible, strong and solo heroes are less effective than those willing to show vulnerability, demonstrate care and create psychological safety on their teams.

Asana’s culture requires new hires to have a measure of vulnerability and curiosity, and people typically become more open-minded and growth-oriented once they join the company, Binder says. Still, it can be a culture shock, she says, for newly hired leaders used to cut-throat corporate climates where “every conversation is a territorial fight.”

What is working to hold onto talent at Asana, Binder says, is almost the opposite of combative meetings. It’s a culture, she says, where people give and receive “real” feedback, but “in a safe and loving way.”

In other words, if there is a battle for talent in the San Francisco Bay Area, the Best Workplaces are winning it by making love not war.

View the lists of the best large and best small and medium workplaces in the Bay Area.