The Number of Women in the Senate Hits a New Record 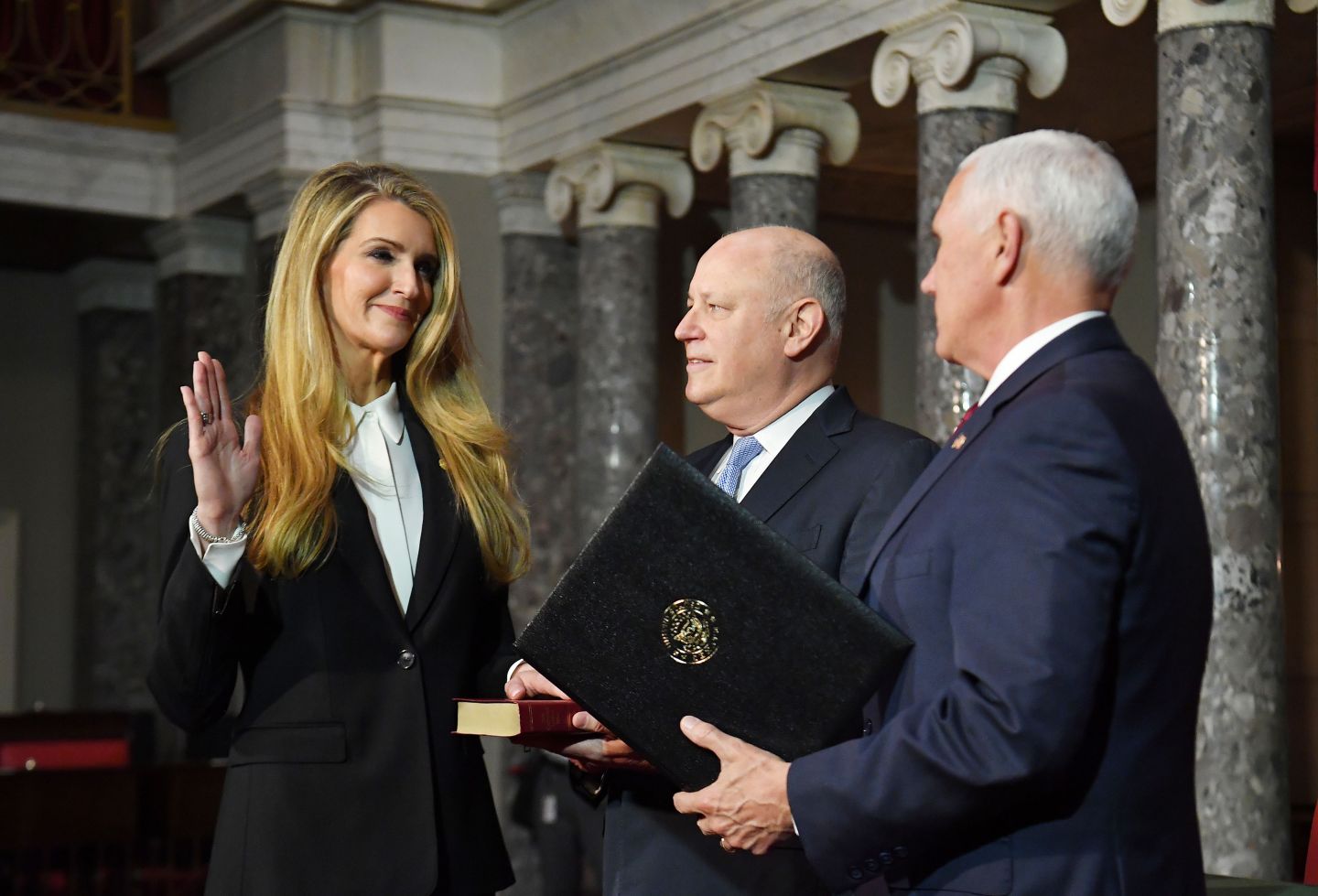 US Vice President Mike Pence (R) conducts the ceremonial swearing-in of US Senator Kelly Loeffler (L), R-GA, as her husband husband Jeffrey Sprecher, CEO of Intercontinental Exchange and Chairman of the New York Stock Exchange looks on, in the Old Senate of the US Capitol in Washington, DC on January 6, 2019. (Photo by MANDEL NGAN / AFP) (Photo by MANDEL NGAN/AFP via Getty Images)
MANDEL NGAN—AFP via Getty Images

Good morning, Broadsheet readers! Payal Kadakia’s ClassPass is a unicorn, the race for Labour leader kicks off, and the number of women in the Senate reaches an historic high. Have a wonderful Wednesday.

- And then there were 26. On Monday evening, Kelly Loeffler was sworn in as Georgia's newest senator. The businesswoman and political neophyte was appointed by the state's governor Brian Kemp (who you may recall from his 2018 race against Stacey Abrams) to fill the seat of retired Republican Sen. Johnny Isakson.

Loeffler's official entry into the Senate didn't get much press—perhaps because she will actually have to run for the seat in November, and will face a tough race if current GOP Rep. Doug Collins decides to throw his hat in the ring. (In tapping Loeffler, Kemp ignored pressure from President Trump to appoint Collins, an administration loyalist, to the seat.)

But there is an aspect to Loeffler's confirmation that's worthy of note: As acknowledged by Sens. Dianne Feinstein (D–Calif.) and Susan Collins (R–Maine), she becomes the 26th woman in the Senate—setting a new record. In a short joint statement, the legislators say: "This is the most women to ever serve in the Senate, and it comes at a time when we need more diverse voices in politics, not fewer.... It took 27 years to go from two women to 26, and we should be able to reach equal representation in the Senate much more quickly. We look forward to that day.”

In addition to helping the body achieve that historic record, Loeffler is also only the second female senator ever to represent her state. The first was Rebecca Latimer Felton, who was sworn in on Nov. 21, 1922, and whose tenure lasted one day. (In an important reminder that not all "firsts" are worthy of celebration, the Washington Post's The Lilly reports that Felton was a white supremacist: Read the full story here.)

Will Loeffler manage to hold on to seat come November? We'll have to wait and see, but regardless, let's hope that after all the votes are tallied, the record she set this week has been broken.

- Going, going, Ghosn. After former Nissan chairman Carlos Ghosn escaped detention in Japan for Lebanon, Japan has issued a warrent for the arrest of Ghosn's wife, Carole Ghosn. She is suspected of lying in sworn testimony about her husband's alleged financial crimes. A spokeswoman for Ghosn said she was allowed to leave that testimony last April without charges and called the warrant "pathetic."  Wall Street Journal

- Class act. Studio fitness platform ClassPass raised a mega $285 million funding round—vaulting the company past a $1 billion valuation and into unicorn territory. It's the latest female-founded startup to reach the milestone, and founder and chairman Payal Kadakia (like Rent the Runway's Jennifer Hyman before her) is nearly nine months pregnant at the time of the news. Fortune

- A CES controversy. Ivanka Trump spoke at the Consumer Electronics Show in Las Vegas yesterday and highlighted the administration's work with tech companies to retrain workers. Her appearance as a keynote speaker at the trade show, which has struggled with diversity, drew scorn from some women in technology. Brianna Wu, a video game developer who is running for Congress in Massachusetts as a Democrat, tweeted that the selection was "a lazy attempt to emulate diversity." Associated Press

- The week in Warren. Sen. Elizabeth Warren debuted a new plan to roll back provisions in a 2005 bankruptcy law that made it harder for consumers to file for bankruptcy. The proposal revives an old fight with Vice President Joe Biden. Warren also got the Vogue treatment this week.

- Ready, set, Labour. The race to choose Labour's new leader and deputy leader in the U.K. formally began on Monday. Rebecca Long Bailey, Lisa Nandy, Jess Phillips, and Emily Thornberry are among the candidates. Read up on their positions here: Guardian

- Reading list/watch list. Stacey Abrams will publish a book next summer about voting rights. (It's not her first book—remember her career as a romance novelist?) And Michelle Obama is heading to IGTV, for a series produced with ATTN on the Instagram platform that will chronicle first-generation college students' freshman years.

- On the road. LGBTQ people often face concerns about safety while traveling. So how does that affect their careers? In a survey, queer women business travelers report dealing with extra research and preparation or worries about work trips that their colleagues don't. The Human Rights Campaign advises companies to consider their employees' needs when assigning or supporting work travel. Vice

The Zora Canon: The 100 greatest books ever written by African American women Zora

The high cost of having a baby in America The Atlantic

"I put everything I have into whatever I’m doing or thinking about at the moment. So it’s not right when people say I’m self-absorbed. I think I’m just absorbed."

-Elizabeth Wurtzel, the author of Prozac Nation. She died at 52 yesterday.