2020 Could Be the Year the Mocktail Goes Mainstream 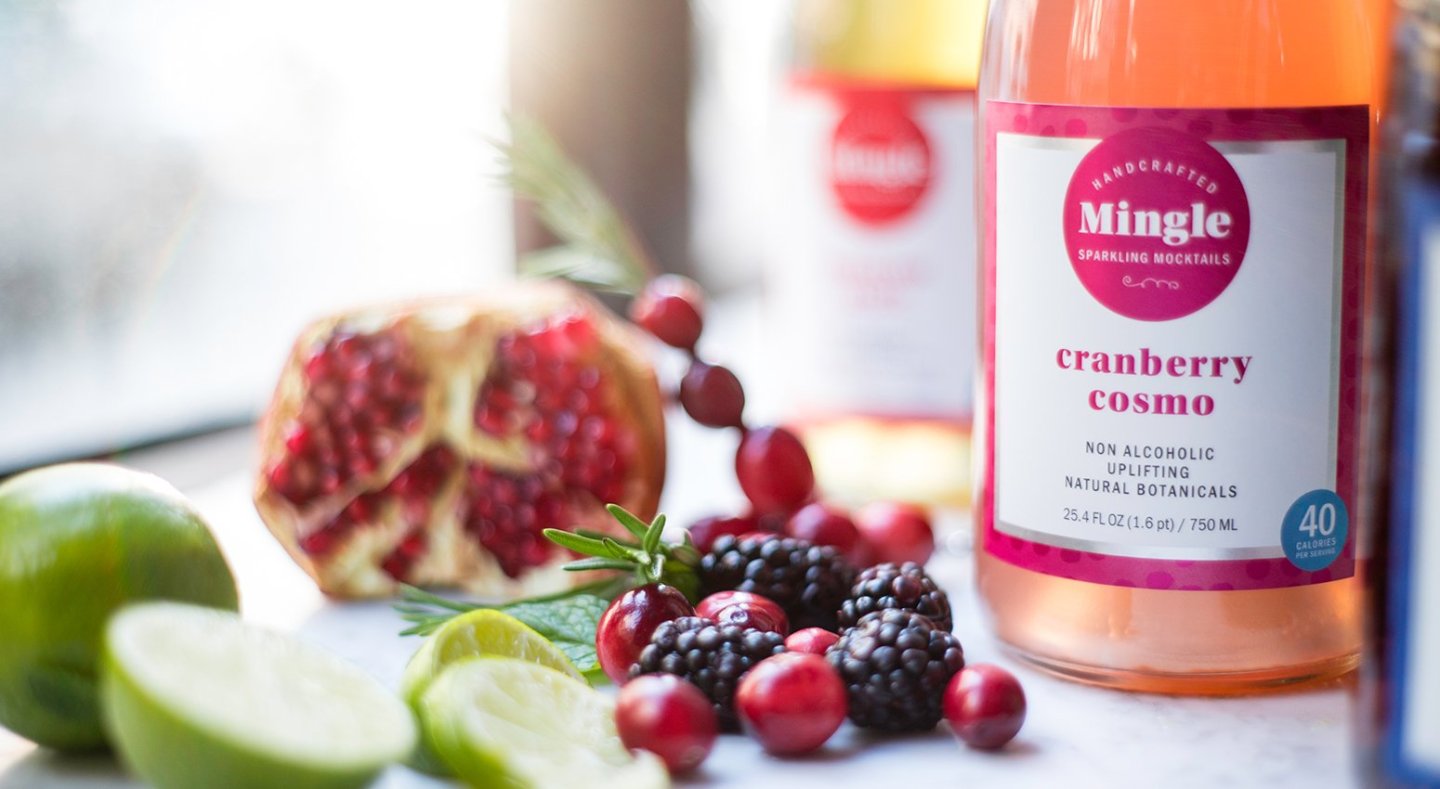 Mingle Mocktails is a Philadelphia-based line of zero-proof, ready-to-drink beverages designed to appeal to cocktail drinkers looking for a fancy beverage without the alcohol.
Mingle

New year, new you, new drinks. After 2019 saw a frenzy of investments, mergers, and acquisitions in the realm of nonalcoholic spirit brands, 2020 could be the year that nonalcoholic drinks earn the same attention (and possibly the same prices) as familiar cocktails on menus at trendy bars and restaurants nationwide.

In 2019, an estimated one in five Americans participated in “Dry January,” a New Year’s resolution spinoff trend in which many casual drinkers give up alcohol for the month of January—likely after overindulging during the holiday season. The movement coined a catchy term, and it’s now about as ubiquitous in diet trend stories as the search for the next big plant-based milk. But it’s going to take more than a month of going dry to impact drinking habits in the long term.

This could be where mocktails (faux cocktails, with all the blends and ingredients familiar to a complex drink, sans alcohol) truly come into play. They look like cocktails, and if made well, they taste like cocktails. And they can be served year-round, making it easier for someone who doesn’t want to drink alcohol (for whatever reason, based on diet, pregnancy, or other health reasons) while socializing.

“Consumer interest in low- and no-alcohol products has been on the rise, particularly over the last year, as part of a larger health and wellness movement,” says Brandy Rand, chief operating officer of the Americas at IWSR Drinks Market Analysis. This trend has been gaining momentum, Rand says, noting analysts have been seeing more cocktail menus dedicate real estate toward “zero proof,” “sans alcohol” or “mocktail” options—but it’s not widespread yet.

The beverage and alcohol market research firm recently conducted bartender interviews and menu analysis across 15 U.S. cities, and one consistent theme was consumer demand for low-sugar, and low- or no-ABV drinks. “This is not quite mainstream, but there is a marked increase, and more bars and restaurants are recognizing the need to innovate,” Rand says. The challenge, she says, is the wide availability and use of no-alcohol substitutes.

Thanks to Diageo’s major acquisition stake last summer, Seedlip might be considered the pinnacle of brands pushing nonalcoholic drinks forward with its “zero-proof” botanical spirits. And Diageo isn’t alone in recognizing the market shifts. “Keeping consumers happy and engaged in your brands means listening to what they want,” Rand notes.

Seedlip founder Ben Branson theorizes that there are four cultural forces driving the movement: Consumers want healthier options; they want quality options; they’re documenting their lives (and their lifestyle choices) on social media; and with today’s work/life balance challenges, we’re just too busy to be hungover.

“Worldwide we are experiencing a paradigm shift in the way we approach drinking, with bigger cultural forces at work that mean the need for quality nonalcoholic options has never been more relevant,” Branson explains. “People are increasingly more mindful of their health and what they consume in terms of food and drink. These societal shifts are forcing a recalibration of our relationship with alcohol; as a result, elevated nonalcoholic options have never been more in demand.”

Outside of big liquor brands, there are a number of startups promising to make mocktails easier to serve than ever.

Perhaps resembling wine more than cocktails, Proteau is a new nonalcoholic aperitif created by cocktail and bar expert John deBary. After nearly a decade of running bars for David Chang’s Momofuku as well as writing, recipe developing, and consulting in the beverage world, deBary says he was inspired to create delicious drinks boasting same level of culinary intrigue as those with alcohol.

For wintertime mocktails, Proteau’s Ludlow Red blends blackberry, violet, black pepper, dandelion, and fig vinegar for a dark and silky sip. For spring and summer, the brand is building on spritzer fervor with the Rivington Spritz, a nonalcoholic take on the Bellini with a blend of strawberry, rhubarb, hibiscus, chamomile, and Champagne vinegar.

Mocktails also offer the potential for drinks that are lower-calorie than your average fruit juice but are also more elevated than sparkling water. Founded in 2018, Mingle Mocktails boasts a lineup of bottled sparkling mocktails, ready to drink immediately after pouring. Each eight-ounce serving contains only 40 calories and is made, Mingle says, with all natural and organic ingredients. And for customers truly looking to replace their cocktails, Mingle has done the marketing homework, with blends such as the Cranberry Cosmo, Blackberry Hibiscus Bellini, Melon Mojito, and a nonalcoholic Moscow Mule.

Founder Laura Taylor says she created Mingle Mocktails after she decided to stop drinking alcohol herself and realized how few options there were for premium zero-proof mocktails at social functions. “I know from firsthand experience that the mocktail movement is taking shape and becoming more mainstream,” Taylor says. “Two or three years ago, people viewed me as an anomaly, wondering why anyone would choose to live life without booze. Now, when I go out to social occasions, I am explaining myself less and less. I’m finding more people are interested and even choosing to take a break from alcohol themselves.”

Founder Laura Taylor created Mingle Mocktails in 2018 after she decided to stop drinking alcohol herself and realized how few options there were for premium zero-proof mocktails at social functions.
Mingle

However, while brands like Proteau, Mingle, and Seedlip enable making mocktails at home easier than ever, what might be the biggest hurdle for pushing nonalcoholic cocktails into the mainstream is getting them onto menus and drink lists at major bars and restaurants. Mocktails do appear on cocktail lists here and there at restaurants in major cities, but they’re more often an afterthought or a pleasant surprise for guests. If you’re looking for a mocktail, usually you’ll need to do some research first before heading out the door.

Taylor replies that the main hurdle would be encouraging business operators and owners to enhance their alcoholic beverage menus with a few zero-proof options to accommodate nondrinkers. “There’s plenty of information supporting the fact that operators can actually generate incremental revenue by adding mocktails to their menus, because people like me would gladly order a zero-proof cocktail at a nice dinner rather than another boring seltzer with lime,” she explains.

At the other end of the spectrum, there are fully fledged mocktail bars sprouting up, boasting entire nonalcoholic drink menus. But these establishments are relegated to just a few cities. And without the alcohol premiums incorporated into the drink costs, it’s going to be extra difficult for these bar managers to justify prices on par with regular cocktails.

“Seedlip created the alcohol-free spirit category, and while we see more products launching, the on-trade is lagging when it comes to developing quality mocktails that mimic a good cocktail,” Rand says. “Consumers are less interested in just a blend of juice and soda—they want the complexity of flavor that comes with a spirit base, not just a mix of modifiers.”

At only four years old, Seedlip already has a presence in 28 markets with 7,500 accounts globally, including 300 Michelin-star restaurants. Yet, in comparison with categories like nonalcoholic beer that are more than 30 years old, the nascent nonalcoholic spirits category, Branson acknowledges, still has some way to go.

“The most difficult aspect of this is the education piece,” Branson says. “Seedlip is pioneering an entirely new category—akin to mobile phones or electric cars—and that’s difficult for people to wrap their heads around initially.”

Proteau launched at restaurants across New York City (including Danny Meyer’s Gramercy Tavern and Chang’s Momofuku Ko) in late 2019, followed by expansion plans to restaurants in Los Angeles. Mingle has been targeting major retailers in the Northeast, including Bed Bath & Beyond, Stop & Shop, and Acme Markets, among others, as well as restaurants and liquor stores in Philadelphia, along the Jersey Shore, and on Long Island, N.Y. Mingle is also working on getting into more retailers—namely Whole Foods, Albertsons, and Publix— in 2020. Consumers across the country can purchase bottles of both Proteau and Mingle online directly from the respective producers or other channels, such as Amazon.

Mocktails might also be able to piggyback on health-minded food trends, finding sweet spots at restaurants that have moved toward plant-based menus. At Caesars Entertainment Las Vegas Resorts, for example, Gordon Ramsay’s Hell’s Kitchen restaurant is expanding both its vegan menu options alongside the debut of a mocktail menu with at least three offerings: an agua fresca made with watermelon, agave nectar, and lime juice; the Banshee Whisper, made with rhubarb puree, simple syrup, and Fever-Tree ginger beer; and a hibiscus sour made with hibiscus tea, lemon, and simple syrup.

And Seedlip may be on its way to being a lifestyle brand of its own. Building off a newsletter and a podcast as well as the bottles, the company is preparing to publish a lavish new book in January (Dry January, no less) with elegant photography and more than 100 nonalcoholic drink recipes crafted by some of the world’s best bartenders. And in May 2019, the company launched its second brand, Æcorn Aperitifs, a range of English grape-based alternatives to wine, which is already seeing traction among sommeliers and wine bars in the U.K. Æcorn is slated to go stateside in the near future.

“People want a high-quality, handcrafted alcohol-free cocktail experience (and are willing to pay for it), Rand says. On-premise operators, she advises, must move beyond drinks like the saccharine Shirley Temple (and even the term “mocktail”) when developing serious no- and low-alcohol cocktail menus with quality ingredients.

“It’s also up to brand owners to develop products and provide education to the trade on how to do this well,” Rand says. “While we see this in more and more craft bars and restaurants, it’s still a small percentage, but definitely expect to see growth over the coming year.”