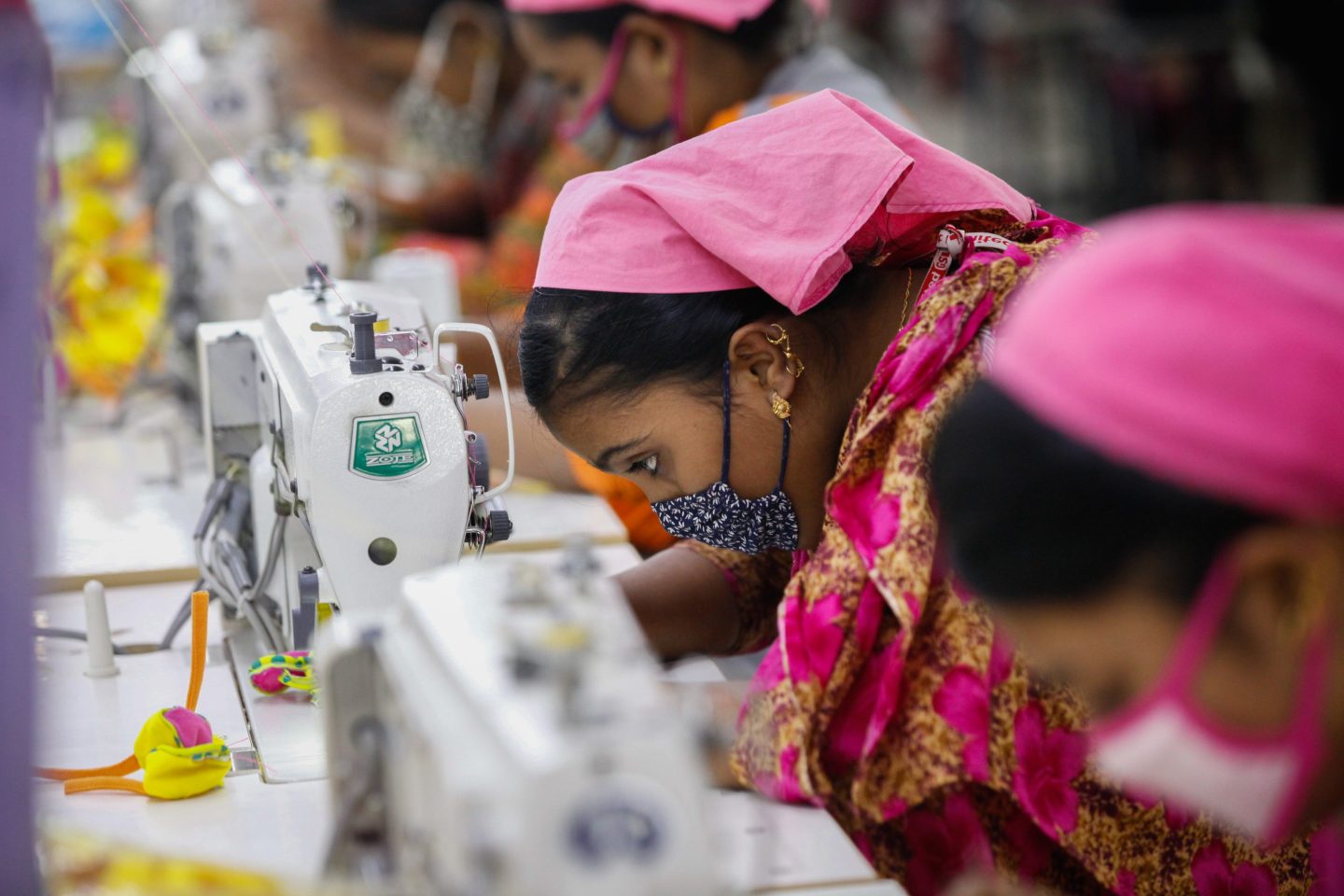 Bangladeshi female workers work at a garments factory in Gazipur outskirts of Dhaka on February 17, 2018. The garment sector has provided employment opportunities to women from the rural areas that previously did not have any opportunity to be part of the formal workforce. This has given women the chance to be financially independent and have a voice in the family because now they contribute financially.However, women workers face problems. Most women come from low income families. Low wage of women workers and their compliance have enabled the industry to compete with the world market.The textile and clothing industries provide the single source of growth in Bangladesh's rapidly developing economy. Exports of textiles and garments are the principal source of foreign exchange earnings. Bangladesh is the world's second-largest apparel exporter of western (fast) fashion brands. Sixty percent of the export contracts of western brands are with European buyers and about forty percent with American buyers. (Photo by Mehedi Hasan/NurPhoto via Getty Images)
Photo by Mehedi Hasan/NurPhoto for Getty Images

Sustainability in fashion is a hot button topic, with retailers large and small racing to prove their green credentials, but the desire for new attire churns and the industry remains one of the world’s largest polluters as climate activists and watchdogs sound alarms.

The industry is the second largest consumer of water and is responsible for 8-10% of global carbon emissions, more than all international flights and maritime shipping combined, according to the United Nations Environment Program.

“So, for example, it would take 13 years to drink the water that is used to make one pair of jeans and one T-shirt,” said Fee Gilfeather, a sustainability expert at the nonprofit OXFAM. “It’s just an incredible amount of environmental resources that are required for making the clothing that we wear.”

Harmful chemicals, global transport of goods, and non-biodegradable packaging add to the environmental cost. The combined impact has put the industry under scrutiny among consumers who want to know where—and how—their clothes are produced. They’re demanding ethical practices and responsible retailing.

Some manufacturers and retailers have found innovative solutions, both large and small.

At the high end of the market, designers are keen to make sustainable fashion synonymous with luxury. In 2015, a sustainability report by Nielsen found that 66% of consumers are willing to pay more for environmentally friendly clothing. At the low, fast fashion end of the industry, promises have been made.

Inditex, the retail giant that owns Zara, H&M, and many other brands, announced a sustainability pledge in July, saying it wants all its clothes to be made from sustainable or recycled fabrics by 2025.

In addition, the global fashion sector addressed climate change by launching the Fashion Industry Charter for Climate Action at the COP24 climate conference in Katowice in December 2018. Leading fashion brands, retailers, supplier organizations, a major shipping company, and global NGO WWF International have agreed to collectively address the climate impact of the industry across sectors. Patricia Espinosa, the executive secretary for UN Climate Change, said the charter comes at a time when “we needed it most.” The charter recognizes the crucial role of fashion as a contributor to greenhouse gas emissions, with multiple opportunities to reduce emissions. It hopes to achieve net zero emissions by 2050 and notes a number of issues: decarbonization of the production phase; selection of climate friendly and sustainable materials; the need for low-carbon transport; and improving consumer dialogue and awareness.

The scale of the charter is vast, but activists are up against behemoths at times.

In Britain, the Environmental Audit Committee reported on the problem earlier this year and found that the U.K. buys more clothes than any other country in Europe, throwing away 1 million tons annually with 300,000 tons (over 661,000,000 pounds) going to incinerators or landfills. The EAC, chaired by Member of Parliament Mary Creagh, concluded that fashion retailers should take responsibility for the clothes they sell. The Committee called for a producer responsibility scheme for textiles, which would add a small amount to the cost of each item, raising money to invest in recycling centers to divert clothing from landfills and incineration. The British government, then led by Prime Minister Theresa May, rejected all the committee’s proposals, much to the dismay of Fashion Revolution, a global movement calling for greater transparency, sustainability and ethics in the fashion industry.

“That set us back 20 years at the very, very least. It is inexcusable and frankly, unforgivable,” said the organization’s creative director and co-founder, Orsola De Castro. “Some of those recommendations, you’d think why would you not take that into consideration? And the reality is that the U.K. government in this occasion has also looked very out of touch because we are seeing quite a lot of policy change happening, for instance, in France. And it seems that them not getting up to speed on this is a terrible thing.”

The industry has other problems as well. It has been accused of unethical labor practices, though the tide began to turn after the Rana Plaza disaster in 2013, when an eight-story building containing a garment factory in Dhaka, Bangledesh, collapsed and killed 1,134 people.

“We’re seeing a huge rise in public demand over not just better products, but better buying habits. And we’re looking at a generation that is applying scrutiny, that is wanting to know that brands are accountable. And obviously transparency has been really on the rise ever since the Rana Plaza disaster,” De Castro said.

But significant change throughout the industry, coupled with mass consumer action, has yet to come, she said.

—UPS’s $20 billion bet on e-commerce is paying off
—How the 2010s changed retail forever
—During the 2010s, consumers made big demands of the apparel industry
—Amazon reveals the biggest sellers and trends of the 2019 holidays
—After a decade of e-commerce, convenience just isn’t enough
Follow Fortune on Flipboard to stay up-to-date on the latest news and analysis.