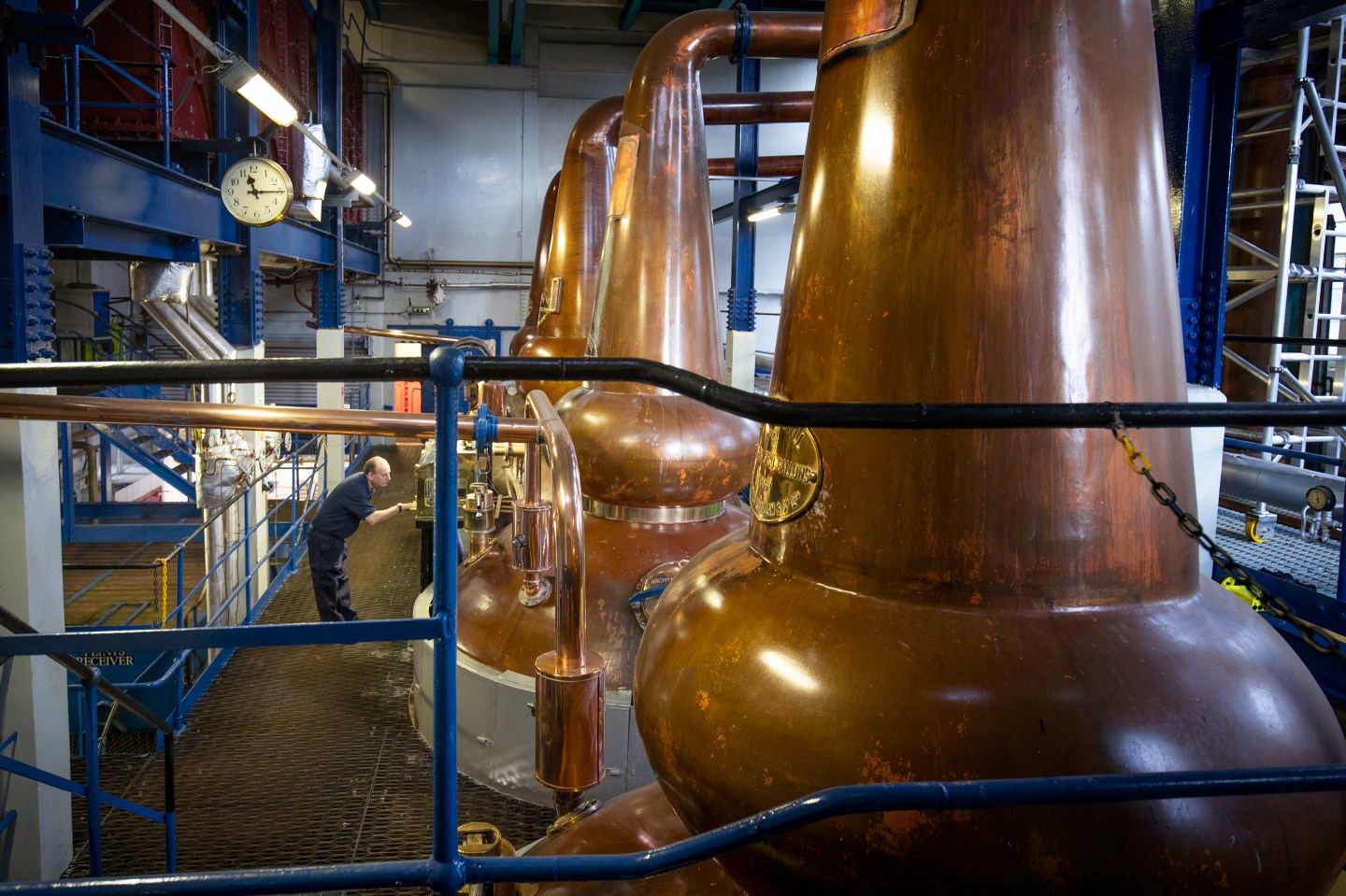 New US Tariffs on whisky. An operator checks the spirit safe in the still room at Deanston Distillery in Doune, where they produce Highland Single Malts. Picture date: Thursday October 17, 2019. Jobs in the Scotch whisky industry may be put at risk and sales could drop by 20% within a year due to new tariffs on exports to the US, it is claimed. See PA story POLITICS Whisky. Photo credit should read: Jane Barlow/PA Wire URN:47414915 (Press Association via AP Images)
Jane Barlow—PA Wire via AP Images

In the wake of the 2008 financial crisis, Dan Garrison, a former tech marketing executive, found himself, like many, without a job. So, also like many, he turned to whiskey.

Except he didn’t just drink the stuff, he made it.

He founded the Garrison Brothers ranch in Hye, Texas, just outside of Austin and began producing his own bourbon. After some trial and error, he found a formula that worked and started racking up accolades and awards from the American Distilling Institute, San Francisco International Wine & Spirits Festival, and more.

Congress passed the Craft Beverage Modernization and Tax Reform Act as part of their larger package of tax cuts. The change lowered the excise tax on distilled spirits from $13.50-per-proof gallon to $2.70 for the first 100,000 gallons of distilled spirits produced by each company. That means the tax paid on each bottle of 40-proof liquor went from $2.14 to $0.43—a pretty stark difference.

The tax rebate helped Garrison grow his company from 11 employees in 2017 to almost 40 today. The savings also allowed him to purchase a 2,000-gallon potstill, quadrupling his production capacity. He hired a sales team and a production team to work nights. He now employs people in Texas, California, New York, and Florida.

But things might not stay so great for Garrison. The tax cuts are set to expire at the end of this year, and with Congress stuck in impeachment gridlock, it seems increasingly unlikely that they’ll be able to pass an unprecedentedly popular, bipartisan bill which would permanently extend the cuts.

On Tuesday morning, Congress members announced that a one-year extension of the reduction would be included in their year-end package. But the package has not yet been passed, and one year doesn’t allow for longterm planning.

“We’re slowly getting into the big leagues, we’re selling almost 10,000 cases a year and that’s when you start to turn a profit in the bourbon business,” he said. “I’ve been waiting to get there for so long…Here we are on the brink of profitability and yet we can’t plan for the future because we have no idea how much we’re going to be paying in taxes next year, it’s very frustrating.”

Jeff Quint, who founded Iowa’s Cedar Ridge Distillery in 2005 said this tax extension is the single most important aspect of his 2020 business plan. He expects to sell about 32,000 proof gallons next year and estimates that with an increase in excise tax, he’ll have to pay an extra $300,000.

“That’s approximately our entire operating margin, so how do you make up for that?” he asked. “You go for anything you can cut, and employment would be a piece of that.”

Tom Lix, the founder of Cleveland Whiskey agreed, “It will make the difference between our first breakeven year or even a small cash-flow positive year and a loss next year if the bill is not renewed,” he said.

Between 2017 and 2018, the first year of cuts, the number of craft distillers in the U.S. grew by about 16% to 1,835 across the country. Small distillers made $3.7 billion in sales, with an annual growth rate of 30%, according to the most recent data obtained by the American Craft Spirits Association in partnership with Park Street and International Wine and Spirits Research.

Margie Lehrman, CEO of the American Craft Spirits Association, ran a survey of the group’s members in mid-December and received about 100 replies. Of those, 100% said that if the tax relief sunsets, it would negatively impact their businesses. Half of all respondents said that they will take action to immediately cut jobs; 15% said they will cut production; 12% will halt any expansion; and 5% will shutter their businesses entirely.

“If these numbers replicate on a national scale, it means that 100 small businesses almost immediately will be forced to close as the first tax payment is due on January 15th,” said Lehrman.

She recalled a painful phone call she had recently with a small distiller whose wife is suffering from cancer.

“He’s spending every ounce of his own personal money on wife’s cancer treatment. He told me that if this tax cut doesn’t continue he’ll also lose his business. I had tears dropping down my face the whole time,” she said. “These aren’t people looking to cut themselves big paychecks, they’re investing their money back into their business. We got caught in the system, we’ve become this political pawn and are being hijacked at this point.”

Distillers are forced to pay excise tax on their goods every two weeks, which means they will be facing their first bill of the year on January 15th. The taxes they pay are based on the number of gallons “removed from bond for consumption or sale” and not based on what they have already sold, explained Lehrman. Distillers will suddenly be responsible for paying up to 400% more in taxes “for something that hasn’t sold and they don’t have the money for yet.”

The bill to permanently extend the tax cut has more than 325 supporters in the House and 75 in Senate, making it clear that at least three-quarters of legislators back it. The tax cut was initially intended to be permanent when it was first introduced in 2015, but was cut back to two years as part of a compromise to get it into the 2017 tax bill.

“When you talk to politicians, they all point you in a different direction,” said Rebecca Harris president and chief distiller at Catoctin Creek, the first legal distillery in Loudoun County, Va., since prohibition.

“They could just pass this bill, it’s so massively supported that they could probably pass it on a voice vote, why isn’t that something that they’re willing to do?” asked Harris, who also serves as a board member of the American Craft Spirits Association. She’ll likely have to delay hiring and expansion plans if the excise tax increases. She’ll also suffer more from the instability and financial hits caused by President Donald Trump’s multiple trade wars and subsequent tariff increases, which had been slightly offset by the tax help.

“We’ve seen Increases in most equipment due to stainless steel tariffs and increases in our own costs due to tariffs on whiskey. If we want to have a meaningful export business in the European Union, we now pretty much have to absorb a 25% price increase because our customers won’t,” she said.

Lix says his company has lost 15% of its revenue due to tariff increases.

“As distillers we have no bailout relief from tariffs,” he explained. “This would really be a double whammy on us, if our tax rates go up it definitely hurts. It’s a shame because with one hand it’s given away and with the other hand it’s taken back.” Garrison said his distributor in the United Kingdom has stopped ordering from his distillery altogether because of the ongoing tariffs.

Distilleries also tend to have an outsized impact on industries around them, as they often pop up as tourist attractions in emerging cities.

“If this doesn’t get done it’ll have a great impact on lots of industries, it will be very devastating for small businesses all around the country,” said Chris Swonger, CEO of the Distilled Spirits Council.

Every job that Brian Treacy, the president of Sagamore Spirits in Baltimore, fills, he said, corresponds to 1.84 jobs outside of his distillery.

“This industry has an incredible multiplier and these things have taken off as being something special in their local communities,” he said. “We do tours here seven days a week and we’re about to head into our busiest time of the year. After people see our attraction, they sleep in hotels in Baltimore, eat out at restaurants and more.” Treacy also partners with local farmers and works with them to provide funding for grains.

Garrison, meanwhile, said that his distillery receives 25,000 tourists every year and that the average spend per visitor is about $79. “That’s magnified for the local economy because they’re staying in local hotels they’re eating at local restaurants, they’re buying craftsmanship goods that are made by local producers,” he added.

“Everything is a tool these days,” said Treacy of the tax extension delay. “Everything is kept in the back pocket for last minute bartering and negotiations and leverage. I mean, that’s kind of what that whole game is about down there [in D.C.] and meanwhile the rest of us sit on the sidelines just hoping it works out for us.”

Still, estimates from the Joint Committee on Taxation found that the majority of the $1.2 billion spent on the cuts went to large distilleries, not small craft spirits outfits. That’s because large distilleries were able to exploit a loophole in the law that allowed them to not only benefit from tax cuts on their first 100,000 gallons but also to “transfers of distilled spirits between producers without payment of tax,” wrote Adam Looney, a senior fellow at Brookings. Large companies then set up shell corporations and transferred spirits to them to receive more of a benefit, he explained.

But even Looney is surprised that the permanent bill has had trouble passing. “Who doesn’t like the idea of a craft brewer getting a break?” he told the New York Times Monday. “It’s an indictment of Congress’s ability to do the basic elements of its job.”

Distillers argue that they just want parity with the tax reductions that wine and beer benefit from, a problem that dates back to prohibition.

“We’re paying four times what wineries pay in taxes,” said Garrison. “The only reason for that is because way back in 1935 after prohibition, distilleries didn’t have anybody at the table so there was no argument to be made and no negotiation to be made at the tax level. It’s a very big frustration.”

“We’re asking for parity to beer and wine,” agreed Treacy. “I don’t think we’re asking for anything outrageous. There are a lot of headwinds in this business, but we’re up for the challenge, actually, we love the challenge. These kinds of tax cuts just help us continue to move forward and make things a little better, actually quite a bit better.”

—How the UN’s climate efforts could change the business world
—The cap and trade market is going global—if politics are put aside
—These tech companies spend the most on lobbying
—Will impeachment be the end for Democratic senators in the 2020 race?
—2020 Crystal Ball: Predictions for the economy, politics, technology, etc.
Get up to speed on your morning commute with Fortune’s CEO Daily newsletter.