Why Costco Is Thriving Even as the U.S.-China Trade War Drags On 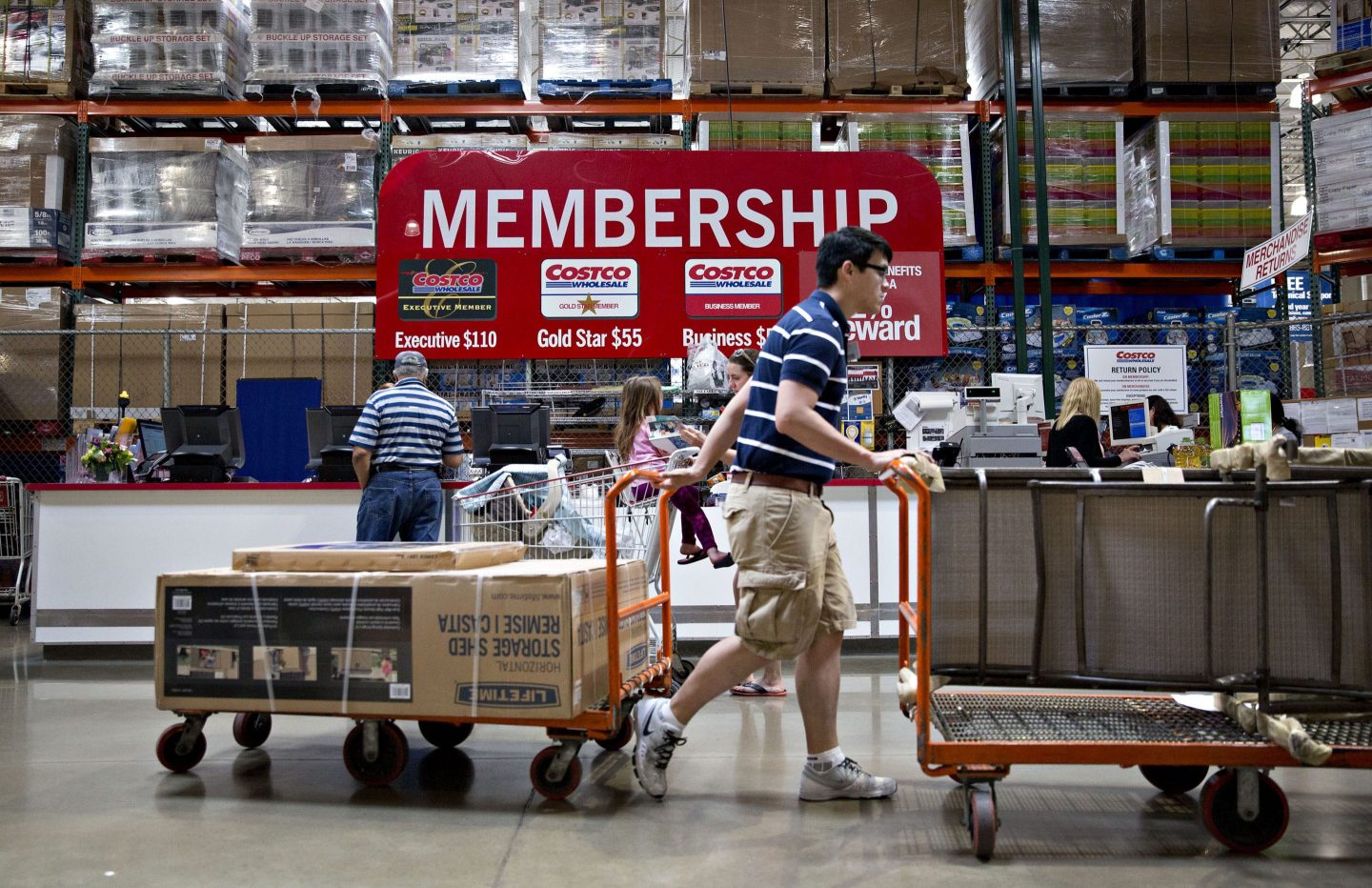 A customer pushes a cart of outdoor items past a membership desk at a Costco Wholesale Corp. store in Naperville, Illinois, U.S., on Monday, May 23, 2016. Costco Wholesale Corp., the largest U.S. warehouse-club chain, is scheduled to report quarterly earnings figures on May 25. Photographer: Daniel Acker/Bloomberg via Getty Images
Daniel Acker—Bloomberg via Getty Images

As trade talks between the U.S. and China drag on, economists and analysts are trying to measure the impact it’s having on consumers and businesses.

A study last month from the National Bureau of Economic Research found that recent rounds of tariffs have affected the prices of U.S. imports, but have yet to be passed on to consumers. Why? “Retailers are absorbing a significant share of the increase in the cost of affected imports by earning lower profit margins on those goods,” the paper said.

Meanwhile, President Trump this week warned that while a trade deal with China was close, he would “substantially” raise tariffs on Chinese goods in the weeks before Christmas. That could hurt retailers during one of their busiest times.

All this sounds like bad news for big-box retailers like Costco, which lure shoppers in by pricing the goods they sell just low enough to earn a slim profit margin. Costco’s business model relies on selling a few products in a broad range of categories, all at a low-low price.

As Costco put it in its most recent annual report, this approach allows it to produce high sales volumes and fast inventory turnover, which “enable us to operate profitably at significantly lower gross margins than most other retailers. We generally sell inventory before we are required to pay for it, even while taking advantage of early payment discounts.”

Costco’s brand relies on this sense that its prices will always be low. So raising prices might help lift its margins, but it could hurt the very thing that keeps more than 90% of its members renewing memberships that cost between $60 and $120 a year. That’s not just a high renewal rate for warehouse clubs, it’s a record for Costco.

But Costco isn’t seeing evidence of a slowdown in sales at its U.S. stores or a decline in its profit margins. Costco’s net sales in the last 12 months grew 8% to $149 billion, while sales in the U.S. stores grew by 9%. Gross margin, meanwhile, held steady at 11.02%, essentially even with the 11.04% margin of the previous year.

Compared with other big-box retailers, Costco has long seen lower profit margins, but they’ve remained stable during the era of higher tariffs. Operating profit margin, which also factors in expenses like marketing and administrative costs, stood at 3.1% last quarter, basically flat with where it stood two years ago. During the same period, Walmart’s operating profit has fallen to 4.2% from 4.5%, while Target’s fell to 5.7% from 6.4%.

“Costco is in a relatively better position to handle rising tariffs due to its large scale, which provides leverage when negotiating with vendors,” Oliver Chen, an analyst at Cowen, said in a recent research note that highlighted the company’s “executional excellence in an increasingly difficult operating environment.”

Costco is working to expand that scale further, opening new stores at a time when many retailers are closing them. In the past four years, the company has opened 63 new stores in the U.S., along with 33 in Canada and other countries that aren’t affected by U.S. tariffs.

In August, Costco opened its first store in China, which was so mobbed on its first day it closed after four hours, CFO Richard Galanti said on an earnings call last month. Sales have “remained strong” in recent months and Costco plans to open more warehouse stores in coming years, he said.

Another buffer the company enjoys on its margins is the membership fees themselves, which make up only 2.4% of revenue but around 70% of its operating earnings, according to Argus Research analyst Christopher Graja. “This revenue stream adds stability to earnings, which stands out in the volatile retail sector,” he said.

Galanti told investors Costco is taking a piecemeal approach to tariffs where it can, passing through the tariff on a handful of big-ticket items, reducing its buying commitments of others, and accelerating shipments before tariffs take effect. The task is easier given that Costco sells a total of 3,800 total items, compared with 120,000 in a Walmart store.

“We are working with suppliers daily,” Galanti said. “We’ve gone to pretty much every supplier on every item to see what we can do to both reduce cost and figure out how to do that.

For now, Costco shareholders believe the company can weather another increase in tariffs as well as rising competition from Walmart, Amazon and others. “Traditional grocery stores are getting smarter and offering discount sizes of key products to keep core shoppers from needing a big-box membership,” says Argus’ Graja.

“The company is not without risks,” Graja said of Costco. “It’s in a low-margin business, and its execution must be close to perfect.” In a tough market for retailers, though, Costco has managed to stay comfortably within its margin of error.

—Malls of tomorrow will be less big box, more lifestyle, and play well with e-commerce too
—With Gap Inc.’s CEO out and sales falling, who will turn the company around?
—Oprah’s favorite high-tech things for 2019
—Walmart Black Friday ad: 8 deals you shouldn’t ignore
—Gift guide: Must-have luxury items for everyone in your life
Follow Fortune on Flipboard to stay up-to-date on the latest news and analysis.