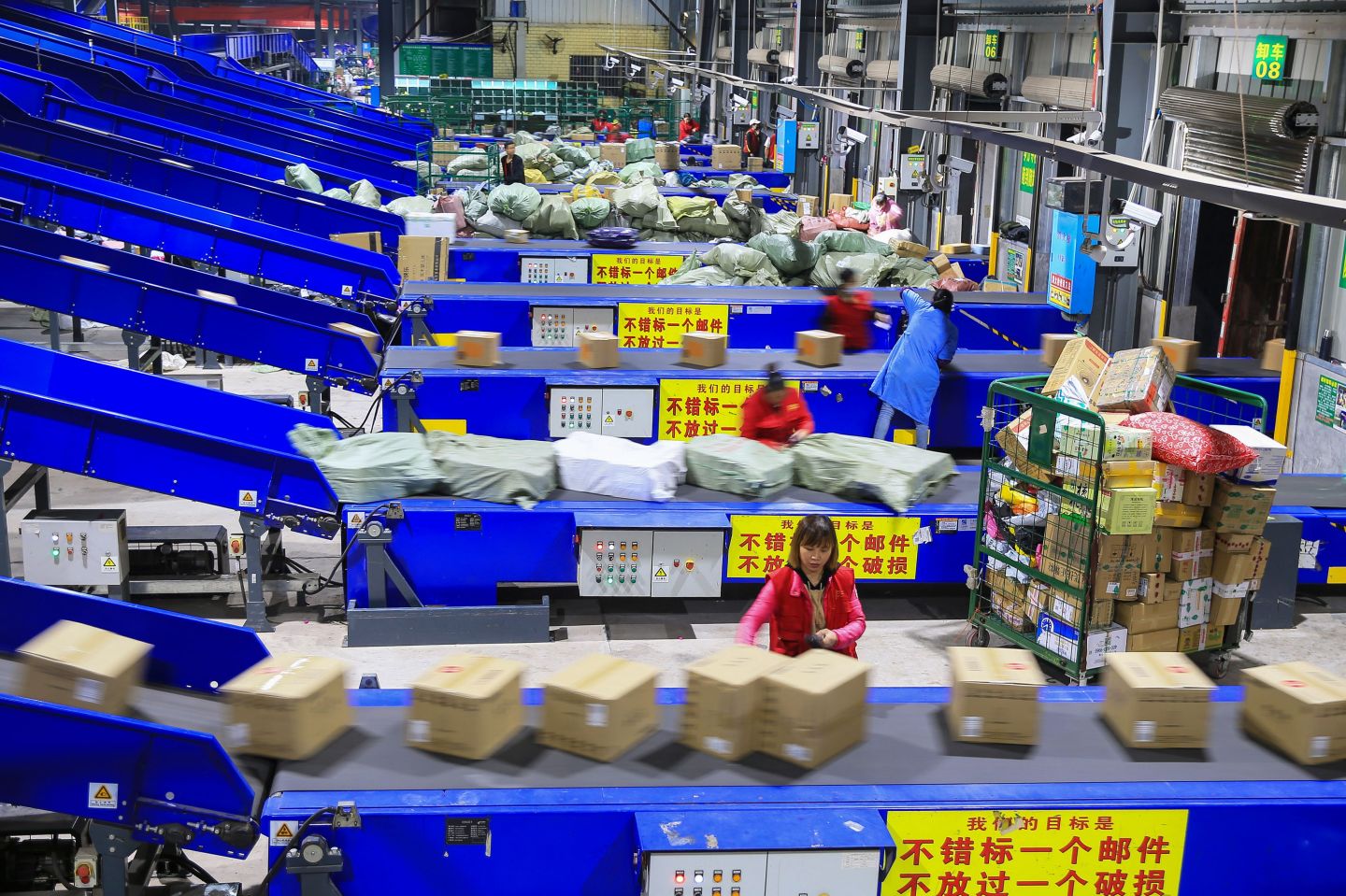 Workers sort out packages at a delivery company a day after "Singles' Day" -- the world's biggest 24-hour shopping event -- in Hengyang in China's central Hunan province early on November 12, 2019. - Chinese shoppers set new records for spending during the annual "Singles' Day" buying spree despite an economic slowdown and worries over the US trade war, with state media calling it a sign of China's rising economic strength. E-commerce giant Alibaba said consumers spent $38.3 billion on its platforms on November 11 during the world's biggest 24-hour shopping event, up 26 percent from the previous all-time high mark set last year. (Photo by STR / AFP) / China OUT (Photo by STR/AFP via Getty Images)
STR/AFP via Getty Images

Chinese conglomerate Alibaba Group Holding Limited will list on the Hong Kong Stock Exchange on Nov. 26 amid an economic recession and social unrest, and aims to raise as much as $13.4 billion in the initial public offering.

According to the draft prospectus for the listing, Alibaba plans to use funding from the Hong Kong IPO to further develop subsidiaries like video platform Youku, food services platform Ele.me, and online travel agency Fliggy.

The funding will also be used to invest more deeply in cloud computing and supply chain management technology and support innovation in new technologies like machine learning.

The Hangzhou-based tech giant started off in e-commerce—with online shopping sites Taobao and Tmall—but has expanded into a wide array of offerings, from mobile payments and cloud computing to food delivery and content platforms.

This will be a secondary listing for Alibaba, which debuted on the New York Stock Exchange in 2014 and raised $25 billion in what remains the largest IPO in history.

The new listing will be Hong Kong’s largest in more than nine years and will provide a boost to a financial market stymied by recession, political instability, and uncertainty around the U.S.-China trade negotiations. It will also make Alibaba shares available to traders in mainland China, where the company is headquartered and where the majority of its business is conducted.

Hong Kong stocks, including the benchmark Hang Seng Index, dropped this week as the months-long protests were marked by violence between demonstrators and police and saw the city’s financial district became the epicenter of unrest, with many office workers joining protests during their lunch breaks.

Alibaba’s $13.4 billion target is slightly lower than the reported $15 billion that Alibaba was expected to raise in Hong Kong before it delayed listing in August, in part because of the protests.

A source with direct knowledge of the matter said that while safety is always a concern, high investor demand for shares in Alibaba made the company confident in its decision to list in Hong Kong, Alibaba founder and former executive chairman Jack Ma’s first choice in 2014.

“When Alibaba Group went public in 2014, we missed out on Hong Kong with regret,” Daniel Zhang, Alibaba’s current executive chairman, said in a letter to staff, the South China Morning Post reported. “During this time of ongoing change, we continue to believe that the future of Hong Kong remains bright.”

Alibaba’s listing plan follows its Nov. 11 Singles’ Day shopping festival, a huge annual shopping promotion that, according to the company’s reports, has raked in more money every year since it began in 2009. This year, the total value of orders processed on that day surpassed $38 billion, breaking last year’s record amidst concerns that China’s slowing economy would hurt consumer spending.

The books for share sales to institutional investors launched on Wednesday in New York and will run for a week.

—Energy companies say the oil glut—and shrinking profits—aren’t over
—Why China’s digital currency is a “wake-up call” for the U.S.
—China’s Singles’ Day sales blew past Black Friday and Cyber Monday —Fintechs TransferWise and GoCardless team up
Catch up with Data Sheet, Fortune’s daily digest on the business of tech.