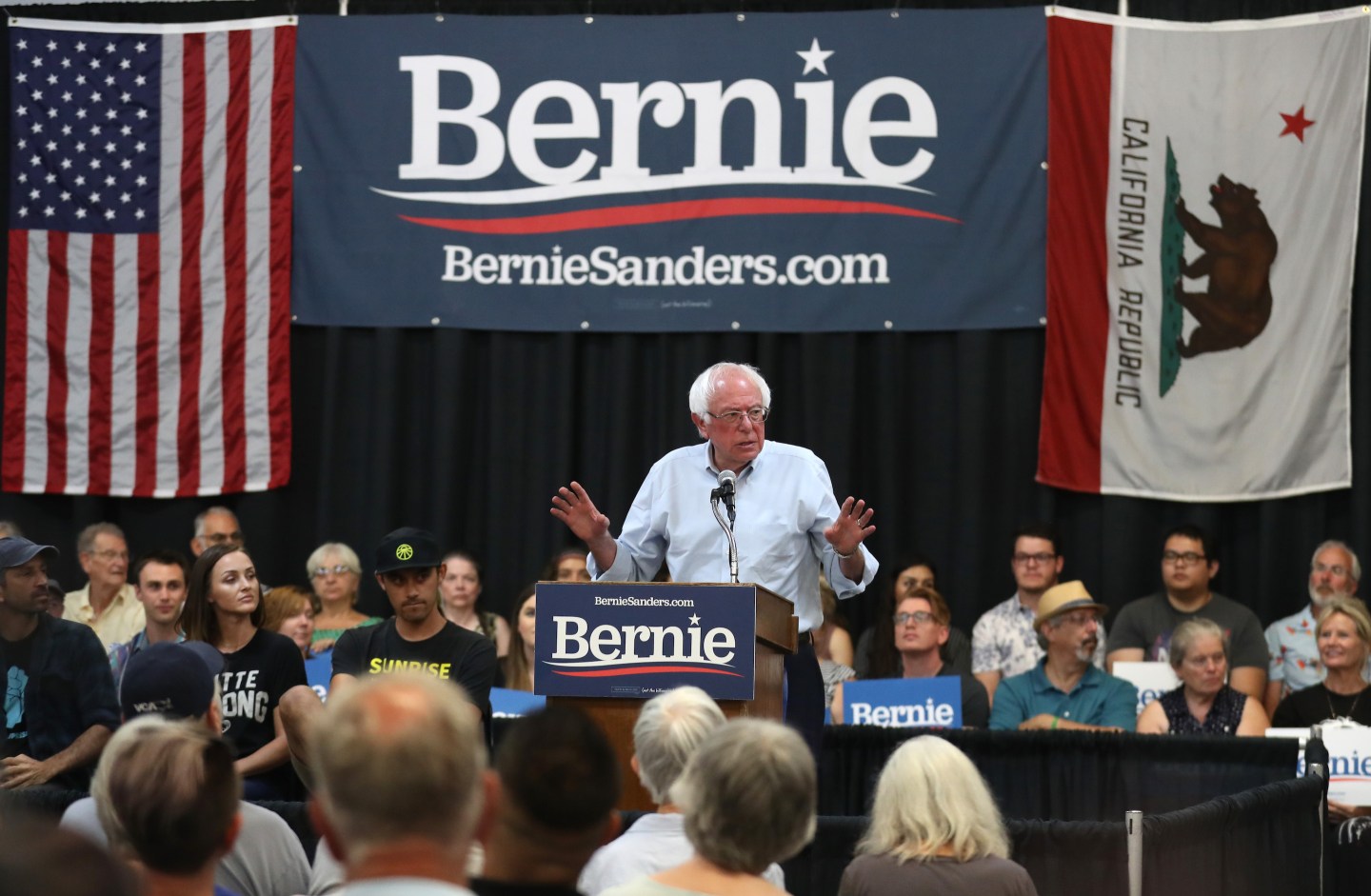 Bernie Sanders is nearly doubling his campaign staff in California, where hundreds of delegates will be up for grabs on March 3.

The campaign said it will have 40 people on the payroll in California and will open its fifth office in the state on Thursday in San Francisco.

“The Bay Area has the highest number of Bernie Sanders volunteers of any city in this country: Our supporters are ready to get out the vote throughout the state of California,” Jane Kim, Sanders’ California political director said in a statement.

California moved up its primary this year to join Super Tuesday, the more than a dozen states that hold primaries. The heavy investment in the state could indicate the Sanders campaign is expecting the race to continue to be heavily contested after the first four early states.

California will send 495 voting delegates to the Democratic National Convention next year, nearly twice as many as any other state. In 2016, Hillary Clinton narrowly outpaced Bernie Sanders in the state’s Democratic primary, claiming 254 delegates to Sanders’ 221.

The staff growth also comes ahead of Sanders’ California swing this week, which will include stops in Fresno and Los Angeles. Sanders will also join most of the Democratic candidates in Long Beach on Saturday at a forum hosted by the California Democratic Party and Unvision.

President Donald Trump fares poorly against Joe Biden and other contenders in Georgia, according to a poll released Wednesday by the Atlanta Journal-Constitution and the University of Georgia’s School of Public and International Affairs.

In a general-election matchup, Biden beats Trump 51% to 43%. Other top 2020 contenders led Trump by smaller margins. Bernie Sanders had a 48% to 44% advantage and Elizabeth Warren bested him 47% to 44%. Pete Buttigieg led over Trump 46% to 43% and Kamala Harris nearly tied with the president, leading 45% to 44%. The poll has a margin of error of plus or minus 3 percentage points and was conducted Oct. 30-Nov. 8.

Georgia has been viewed by both parties to be a competitive state in next year’s election. Regardless of who the Democratic nominee is, the poll found Trump to be a net unfavorable in the state: 54% of Georgia voters disapprove of his record compared to 44% who approve. Independents largely sided with Democrats on Trump’s performance. A majority support the impeachment inquiry and 60% of independents disapprove of the president’s job.

Rep. Tim Ryan, the Ohio Democrat who dropped out of the presidential race last month, has endorsed Joe Biden for president.

Ryan ended his own presidential campaign after polling less than 1%. He sought to position himself as a moderate alternative to President Donald Trump and promised to champion working-class Americans. His district, which includes Youngstown, voted for Hillary Clinton in 2016.

Ryan said Wednesday on MSNBC that the 2020 election is about “stability and healing” and he predicted Biden could win against Trump. “That stability, while not as fancy, flashy, is going to be what people will come around to,” Ryan said.

—How to watch the public impeachment hearings live online without cable
—Which Republicans will likely support Trump in the impeachment hearings
—Are white Democrats turning on presidential candidates due to Latino votes?
—Election security experts worry false fraud claims will disrupt 2020 results
Get up to speed on your morning commute with Fortune’s CEO Daily newsletter.