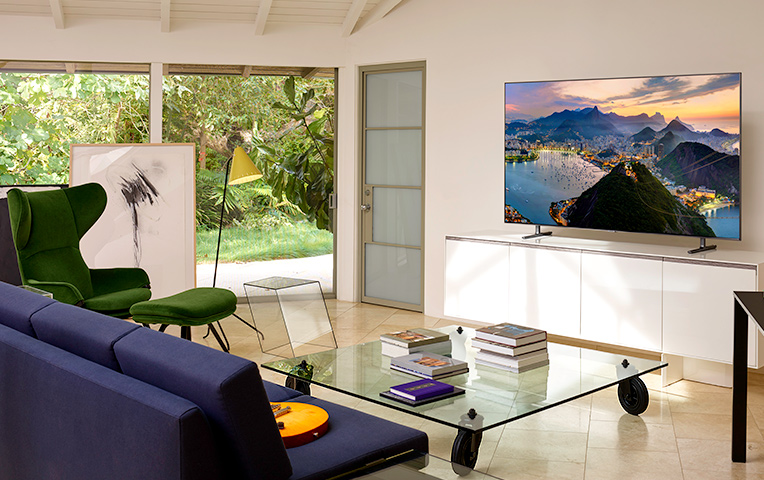 For some people, Netflix and chill is more than an expression—it’s a lifestyle.

The quality of home entertainment options has increasingly made it more appealing to stay home rather than have a night on the town. And with the flood of streaming services currently arriving (and more on the way), dedicated couch potatoes have a plethora of choices.

Whether you’re looking for someone special or just want to spruce up your living room/home theater, there are plenty of ideas, regardless of your budget. Here are a few of our favorites.

Samsung Q80 TV: While Samsung does offer higher-end sets available, the Q80 line is a rock solid, budget friendly choice. It offers an eye-popping array of colors and superior 4K UHD picture performance. Black levels are particularly impressive, due to Samsung’s QLED technology. It effortlessly upscales non-4K content. It’s loaded with smart features and offers apps for most major streaming services. And, when you’re not watching a show or film, it acts as a digital frame, brightening the room with art or becoming nearly invisible, rather than just being a gray rectangle chewing up wall space. It’s the most bang you’ll get for your TV buck today. Suggested retail price: Starts at $1,599.

Riva Concert: This is, first and foremost, an amazing speaker. Riva Audio was founded by music legend Rikki Farr, who has produced and promoted live concerts for everyone from Pink Floyd to Tom Petty—and he was very particular about the device he wanted to craft, resulting in a single speaker that delivers rich, distortion-free stereophonic sound. The Concert, though, also includes Amazon’s Alexa assistant, giving you access to all of its abilities. It’s a one-two punch that puts it ahead of Sonos and other high-end home smart speaker competitors. SRP: $199.

PlayStation 4 Pro: The current console generation is getting long in the tooth—and new systems from Microsoft and Sony will debut next year, so it might seem an odd time to recommend the PlayStation 4 But the catalog of games available right now for the PS4 is extensive and high quality. Developers will continue to support it for years. And it’s a safe bet that retailers will offer some notable discounts on the system this holiday season. SRP: $399.

Disney+ Subscription: You may already have subscriptions to Netflix, Amazon Prime Video and/or Hulu, so why add more? It all comes down to the content libraries. Disney doesn’t just want to become king of the hill among streaming companies, it wants to do so in a hurry and it has an impressive lineup backing it up. The extensive back catalog of Disney and Fox films that will be made available, along with anticipated original programs, such as The Mandalorian and The Imagineering Story, make this worth the gamble. SRP: $70 per year.

Fire TV Stick 4K: While you won’t be able to access every service (hello Apple TV+) with this streaming stick, it will give you access to many, including (of course) Amazon’s Prime Video. It also boasts support for every major HDR video format and the Alexa personal assistant. And it does all of this for $100 less than Apple TV. SRP: $50.

Arcade 1Up Arcade Cabinet: Thanks to digital storefronts and mobile devices, it’s not hard to play classic arcade games these days, but the experience isn’t quite the same when you do so by tapping a screen or using a console controller. Arcade1Up machines bring the quarter-gobbler experience to your home, Some focus on one or two games (like Galaga/Galaxian or Pac Man/Pac Man Plus), while others have a wider array (Rampage/Defender/Joust/Gauntlet), New this year is the Marvel Super Heroes Cabinet, with a trio of Marvel fighting games from Capcom and a Teenage Mutant Ninja Turtles cabinet. SRP: Starts at $299.