Another Wrinkle Emerges in the WeWork Saga 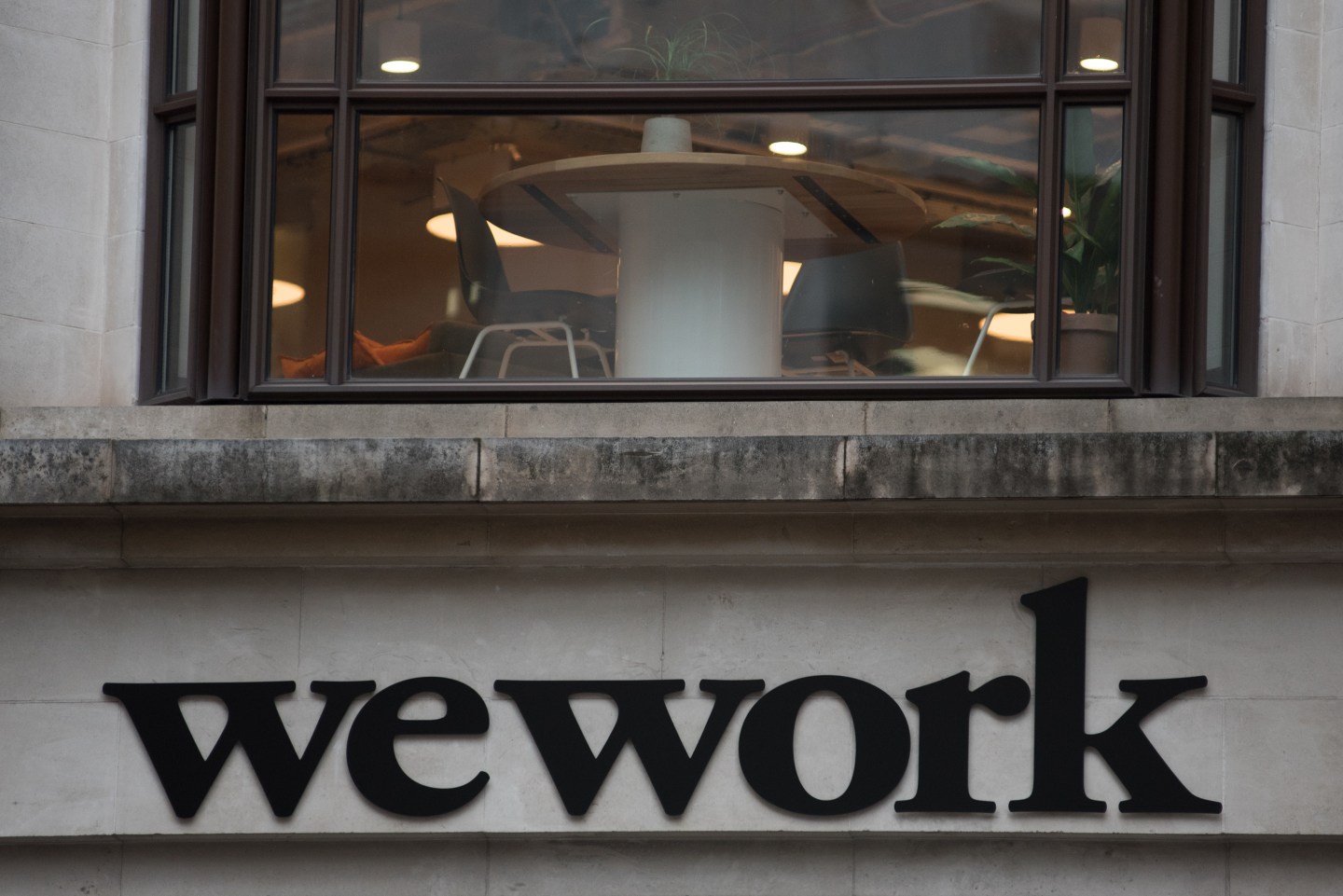 Thanks to a double-down bet by SoftBank, WeWork (which by some accounts was going to run out of money Friday) now has the funds it needs to continue operations. Employees may be outraged at the terms given to founder Adam Neumann, but on the bright side, thousands of planned layoffs have reportedly been postponed due to lack of funds to pay severance.

But for all those that have escaped immediate peril, there are some investors that may have exposure to WeWork’s declining fortunes without realizing it: buyers of the mortgage-backed bonds called commercial mortgage-backed securities, or CMBSs.

During a review of Securities and Exchange Commission filings, Fortune identified at least nine CMBSs issued through banks such as Credit Suisse, Bank of America, and JPMorgan Chase in which at least one of the pooled mortgages was on a building where WeWork leased between 25% and 100% of the available space. Should WeWork cease operations in those buildings, that could be significant income to replace. And the lease income pays the mortgages that fund payments to bondholders.

What are mortgage-backed securities?

In a CMBS, a bank bundles mortgages on a variety of buildings, often from different states, and uses that as collateral for a bond. Initial cash payments from buyers give mortgage holders and banks capital for further investment. The bond buyers get to receive regular payments over a number of years, funded by the mortgage incomes. But all this assumes tenants pay their rent so building owners can make their mortgage payments.

The concept of mortgage-backed securities probably sounds familiar because instruments, based on pooled household mortgages, were a primary driver of the Great Recession. Even though rating agencies had given bonds overall top credit scores, many of them had mortgages taken by people with lower credit scores. As many homeowners began defaulted on their mortgages, the securities that rested on them collapsed.

Nothing suggests that any of the WeWork-occupied buildings that are included in these commercial mortgage pass-through certificates are in danger of not meeting their mortgage payments. But the company’s difficulties do increase risk. Following are a few examples Fortune found.

Buildings depending on WeWork

One example is a nearly $730 million issuance from Credit Suisse of the “Commercial Mortgage Pass-Through Certificates, Series 2017-C8” offered in 2017 through a special-purpose legal entity called “CSAIL 2017-C8 Commercial Mortgage Trust.” The bundle included mortgages on 55 buildings across 24 states. Unlike with many home mortgages, none of the commercial mortgages includes have insurance or a government guarantee of ultimate payment.

One of the eight building mortgages from New York, 85 Broad Street in Manhattan, was 87.1% leased in April 29, 2017 and represented 11.1% of the mortgage pool backing the bond. WeWork leased 26.2% of the total, meaning only 60.9% of the building was leased by other companies.

WeWork paid an annual base rent of $13.4 million, or 30.8% of the total base rent the building received. The lease expiration date was listed as Aug. 31, 2033. Credit Suisse declined to comment.

Banc of America Merrill Lynch Commercial Mortgage—which, despite the deviation in spelling, is associated with Bank of America—combined mortgages on 89 buildings across 30 states in an instrument known as Bank 2017-BNK9. The total bond value on December 6, 2017 was $875.9 million.

One of the mortgages, an 11-story Boston building (the Park Square Property) was 5.7% of the mortgage pool and had an historic occupancy rate of 86.9%. WeWork leased 27.2% of the space through through July 2032—and was subleasing to such companies as Amazon and Liberty Mutual—at an annual rent of $5.5 million, which is 27.7% of the building’s total rental income. Bank of America declined to comment.

Benchmark 2018-B2 Mortgage Trust, a February 2018 $1.3 billion pass-through from JPMorgan Chase Commercial Mortgage Securities, included 67 buildings in 24 states as well as the District of Columbia. WeWork was the only tenant at the included property of 220 Northwest 8th Avenue, Portland, Oregon, and 1.3% of the total mortgage pool. As the document notes, WeWork ran a loss from January 2017 to September 2017 and then opened a second location less than a mile away, causing a decline in revenue and occupancy at the 220 Northwest location.

A second property, the Red Building (2.7% of the total mortgage pool) with the 2017 revenue of $9.3 million—more than double the previous year’s revenue—with WeWork (which has often contracted at above market rates for space) as the largest tenant. JPMorgan said that because it did not originate the mortgage on either the Red Building or 220 Northwest, it declined to comment.

Problems with involved mortgages aren’t theoretical. In October 2018, Wells Fargo Bank and Wilmington Trust, trustees for the Credit Suisse-issued 2017-C8 pass-through and for another related vehicle, sued to foreclose on a $45 million mortgage on one of the properties. Wells Fargo claimed that the company operating the building in question, a condominium and commercial space project, failed to make appropriate payments of common charges (which cover shared building costs including maintenance and taxes), had been involved in multiple lawsuits in violation of the mortgage terms, and failed to maintain common areas, resulting in multiple building violations. As of September 2019, the case was still in litigation.

But the potential danger to building owners of a cutback in or loss of WeWork occupancy varies with the percentage of space the company has leased and the building itself, according to Evi Kokalari-Angelakis, founder of Golden Key Realty Group in Astoria, New York. “The economy is really, really good right now [and] 27% is not a big deal,” she says. “If they take 70% or 80% in one building, that would scare the heck out of me.”

The greatest danger comes where the pool of mortgages is between $300 million and $600 million and a building that might have trouble collecting lease payments represents at least 5% of the total, according to Paul Monsen, a vice president at real estate capital advisers George Smith Partners. “That can have massive impact on the entire bond,” he says. “I would be a lot less concerned about the ones in the upper tiers, $750 million or above.” Complicating matters is that a CMBS may split the pool into different parts, or tranches, with varying risks and rewards. So while a building may not be 5% of the total pool, it could be a larger part of the tranche it backs.

Kokalari-Angelakis notes that, at least in Manhattan, there are large building owners who are familiar with the sublease model and could take over that portion of the business. “In New York City, it’s not a big issue,” she says. “In another city or state, that could be a completely different story.”

—Maven, the company that slashed Sports Illustrated, has had its own share of financial woes
—What Warren Buffett’s move to increase his Bank of America stake says about the health of the economy
—How would you spend a universal basic income? We asked participants around the world—and their answers might surprise you
—Why JPMorgan Chase wants to give more former criminals a second chance
Don’t miss the daily Term Sheet, Fortune’s newsletter on deals and dealmakers.