Donald Trump Jr. on the Hustings: Energizing His Father’s Loyalists 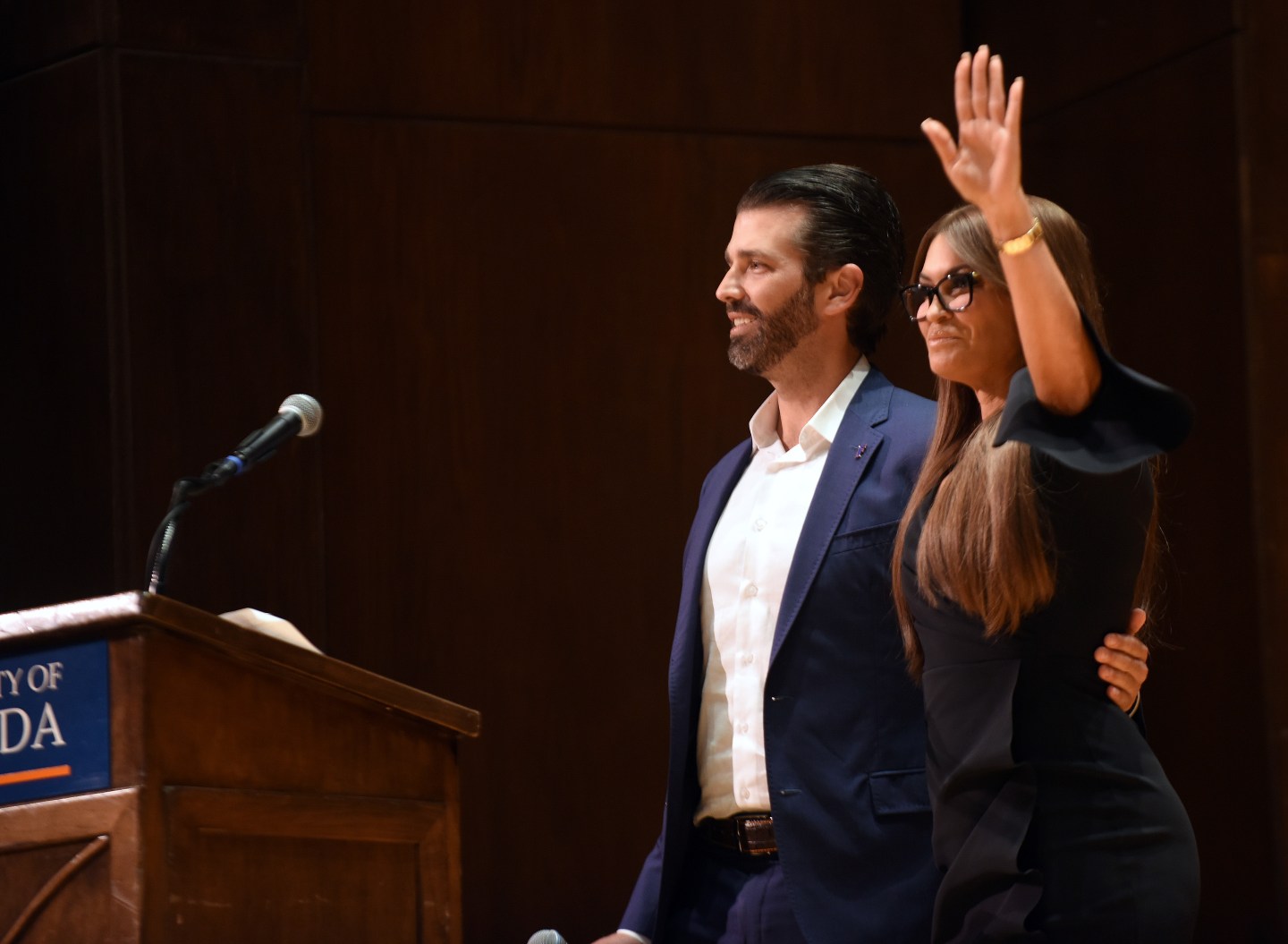 GAINESVILLE, FLORIDA, UNITED STATES - 2019/10/10: Donald Trump, Jr hugs his girlfriend, Kimberly Guilfoyle, before speaking at the University of Florida. The couple was paid $50,000 from student activity fees and tickets were distributed free of charge to students. The event drew hundreds of protesters outside the University Auditorium who objected to what they called a campaign rally. Trump, Jr and Guilfoyle spoke for less than a half hour each and answered a few questions submitted on Twitter. Several protesters were removed from the auditorium during the event. (Photo by Paul Hennessy/SOPA Images/LightRocket via Getty Images)
Paul Hennessy/SOPA Images/LightRocket/Getty Images

The shout of “2024!” from the crowd was unmistakable. It stopped Donald Trump Jr. cold.

President Donald Trump’s eldest son had been in the midst of a humor-laced screed in which he decried Joe Biden as too old and Elizabeth Warren as too liberal and insisted his father’s 2016 campaign was too disorganized to possibly collude with the Russians. As many in the crowd of several hundred laughed, Trump Jr. held a dramatic pause before exclaiming his response:

The son has become the prime warmup act for the father at political rallies, often appearing more than an hour before the president speaks, another bombastic provocateur who revels in the tribal loyalty of the supporters who pack Trump rallies. It is a call to arms to a fawning crowd and Donald Jr. has become a master preacher.

His speeches are laced with the same incendiary, sometimes false rhetoric as his father’s, at times even questioning whether Democrats can call themselves Christians. But in these venues, his word is gospel.

The “2024” call from the audience at a San Antonio convention center room on Tuesday underscored the rising stardom of the president’s eldest son, who has become the swaggering embodiment of the “Make America Great Again” ethos.

By far the presidential scion with the closest connection to conservative voters, Trump Jr. is already key in his father’s reelection effort, especially in deep red Republican districts. But where he was once under the scrutiny of special counsel Robert Mueller, now he is drawing criticism for seemingly hypocritical attacks on another son of a famous politician.

And he doesn’t seem to care at all.

“In 2016, my father said something very serious. He goes: ‘What do you have to lose?’ And he was right,” said Trump Jr, broadening a pitch the president first made to black voters to reach the entire electorate. “So America, you gave him a chance and he has delivered on those promises. Now, what do you have to lose? A lot.”

And then Trump Jr, who was the headliner on this warm October day, gleefully skewered one of the president’s Democratic foes. “Joe Biden, when on the campaign trail, his whole thesis was that government has failed. No s–t, Joe!”

Trump Jr. was one of the campaign’s potent tools in 2016, frequently sent out to small towns and rural areas where the Republican candidate looked to turn out disaffected voters who hadn’t cast ballots in years. An even more aggressive campaign schedule is in the works for 2020.

“He’s the future,” said Annie Davidson, 65, of Alamo Heights. “He’s just like his father and I can’t wait to vote for him someday too.”

By far the most outspoken of his siblings, Trump Jr. has never shied away from a political fight, even when it leads some to question his own sense of self-awareness.

He has been one of the loudest critics of Biden’s son Hunter, suggesting that Hunter Biden only had opportunities in other countries, including Ukraine, because of family connections.

“When you’re the father and your son’s entire career is dependent on that, they own you,” Trump Jr. told Fox News this past week.

Demonstrators protesting a recent appearance by Donald Trump, Jr., campaigning for his father’s reelection, at the University of Florida in Gainesville.
Paul Hennessy/SOPA Images/LightRocket/Getty Images

Some critics could not resist noting that Donald Trump Jr. shares both the first and last names of a man who gave him his high-paying corporate job and elevated his standing during the 2016 presidential campaign. It was the president’s push for Ukraine to investigate the Bidens that prompted House Democrats to launch an impeachment investigation.

“We’re left with a situation where every presidential action is under a cloud of suspicion for corruption, and that suspicion increasingly seems justified,” said Noah Bookbinder, executive director of Citizens for Responsibility and Ethics in Washington.

Trump Jr. has pushed back, suggesting that his criticism of Hunter Biden was not for having a famous father, but rather for trading access to his father’s office to enrich himself. But neither Biden has been charged with wrongdoing.

Hunter Biden told ABC this past week that while his decision to take the job was not unethical, it showed “poor judgment.” But he also made clear that “Trump Jr. is not somebody that I really care about.”

Despite a pledge to cease all new international business once the president took office, the Trump Organization has continued to work on previously struck agreements and profited from the presidency. Congress has called for investigations into foreign officials being steered to stay at the Trump International Hotel in Washington, Air Force crew members spending nights at Trump’s Scotland golf resort, and Vice President Mike Pence lodging at Trump’s Irish golf course, more than an hour from his destination.

Trump Jr.’s eyebrow-raising attacks on another political son came just days after he had to distance himself from a headline-grabbing tempest when it was revealed that he had recently attended a Florida conference for Trump supporters where a parody video was screened that depicted the president killing members of the news media and political opponents.

Trump Jr. said he never saw the video, which aired as part of a three-day conference at the president’s golf club outside Miami. But Trump Jr., who prides himself in his ability to use social media to poke at liberals, was quick to draw an equivalency on Friday. He used Twitter to highlight a Times Square billboard in midtown Manhattan, on which the Portland, Oregon-based clothing company Dhvani portrays the president being hog-tied by a woman clad in its athletic wear.

“Since you had time to thoroughly cover a stupid and tasteless meme seen by 8 people with incredible outrage, I figured you should dedicate the same time and outrage to THIS BILLBOARD IN TIMES SQUARE you hypocrites!” he tweeted. “Unless of course you’re just full of s–t.”

Trump Jr. has long relished posting button-pushing tweets. His Twitter feed has traded in conspiracy theories and hardline messages about immigration and gun control and he has a book on the way that hits the same themes. He once circulated a post that compared Syrian refugees to a bowl of Skittles candy that contained some that “would kill you.”

Trump Jr. declined a request for an interview for this story.

He is unbowed and unapologetic, and his approach appears to mirror his father’s combative defiance toward the controversies that swirl around the White House and the Trump family.

Though he runs the Trump Organization with his brother, Eric, Trump Jr.’s political obligations frequently keep him far from his office on the 25th floor of Trump Tower. The more politically minded of the two brothers, Trump Jr. has embraced his role as a popular emissary for his father, crisscrossing the country on campaign trips, showcasing his relationship with former Fox News host Kim Guilfoyle and headlining Republican fundraisers.

Though he grew up in Manhattan and Florida’s gilded coast, Trump Jr. has established deep ties among rural Republicans and has become an outspoken defender of the Second Amendment. He is viewed by many close to the president as a more logical political heir apparent than his sister, the far more cosmopolitan and refined Ivanka Trump. Where Ivanka Trump, a senior White House aide, has taken to promoting women’s and economic issues while hovering in diplomatic circles at international summits, Trump Jr.’s Instagram feed is filled with hunting and fishing photos.

In 2018, he did more than 70 events for GOP candidates and state parties and will easily eclipse that next year when his father’s name is on the ballot. Those close to him say he may run for office someday, but probably not until after his five children are considerably older.

His front-and-center role for the campaign is a relatively unusual one for recent presidential offspring. Presidents Barack Obama and Bill Clinton had children too young to campaign. While President George H.W. Bush’s adult children, including a future president, were in Washington at times, they did not possess the star presence of Trump Jr.

He has not shied away from the spotlight or criticism, having been battle-hardened by the pressure he faced during special counsel Robert Mueller’s Russia investigation, which looked into a 2016 meeting Trump Jr. had with a Kremlin-connected lawyer seeking damaging information on Hillary Clinton. No charges were brought against him.

On the campaign trail, Trump Jr. derides the impeachment inquiry and credits his father’s business skills for economic gains, declaring in San Antonio: “It’s nice to have someone running the country who has signed the front of a paycheck and not just the back.”

The crowd roared and Guilfoyle applauded. After the rally, the eldest Trump son headlined a big-dollar dinner in Texas and, days later, was barnstorming in West Virginia for more Republican candidates.

There was more talk of, someday, a possible Trump political dynasty.

“I expect Don to be a player in the conservative movement for years and years to come,” said Andrew Surabian, a Republican strategist who advises Trump Jr.

—What Democrats can do if Rudy Giuliani defies congressional subpoena
—Collecting illegal immigrant DNA includes U.S. asylum seekers
—5 lessons history has taught us about impeachment
—Most Americans favor an impeachment inquiry—but are wary of removing Trump, polls find
—How whistleblowers have taken down titans of American business
Follow Fortune on Flipboard to stay up-to-date on the latest news and analysis.