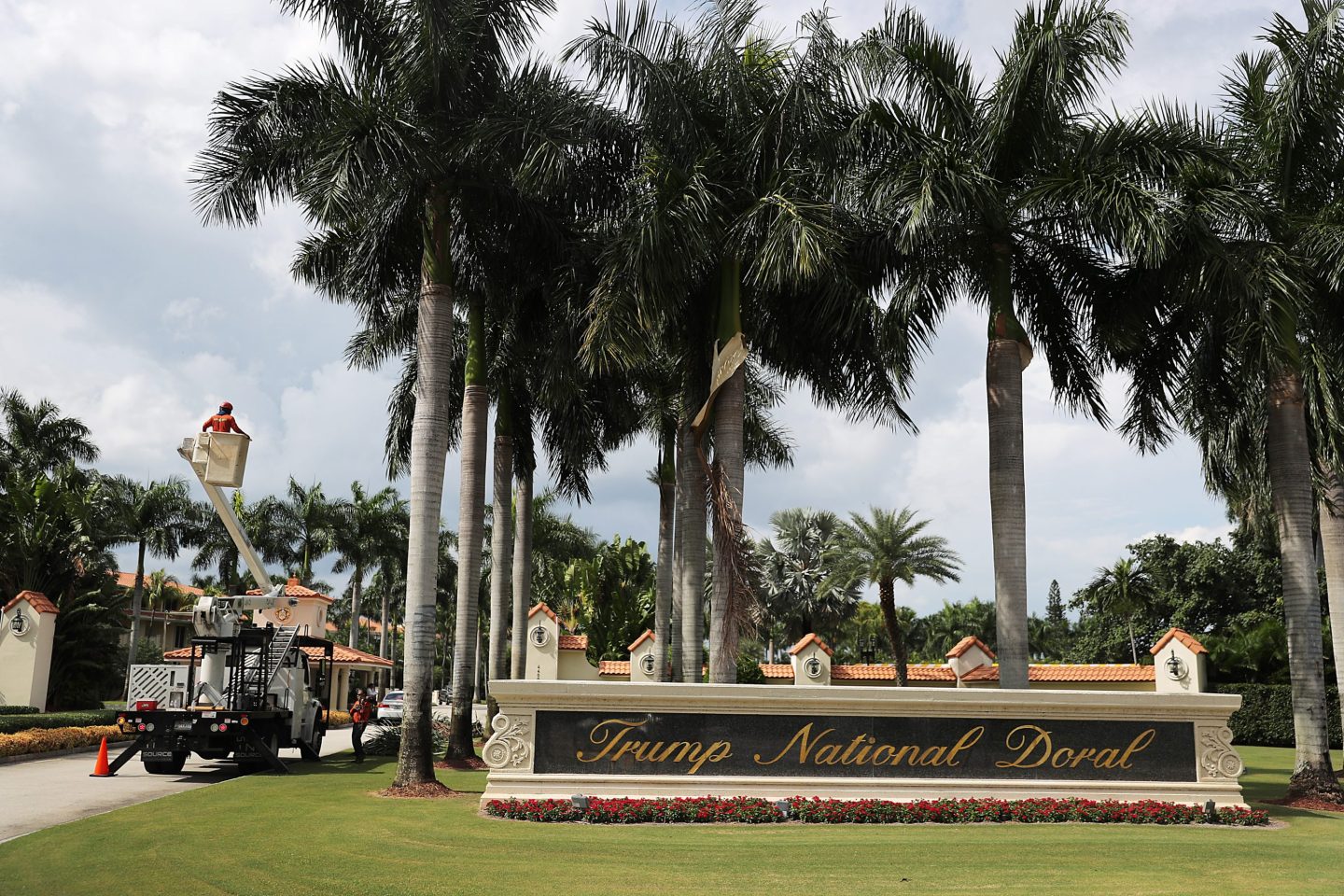 Having first floated the idea of hosting next year’s G7 summit at his Trump National Doral resort in August, President Trump has now pulled the trigger on a move that’s already widely raised questions about a conflict of interest and whether he’s illegally profiting from his office.

After all, the Trump Organization still owns and operates the South Florida golf resort, which it bought out of bankruptcy for $150 million in 2012. And with scores of foreign officials and dignitaries set to flock to Doral in June, the decision has reignited concerns that the president is in violation of the Constitution’s emoluments clause, which prohibits U.S. officials from receiving payments or gifts from foreign governments.

Mick Mulvaney, Trump’s acting chief of staff, appeared to try to preempt such concerns Thursday in announcing that Doral would indeed host the international gathering. He noted that the administration’s vetting process concluded that Doral is “by far and away, the best physical facility for this meeting,” and stressed that Trump would not profit from staging the summit at his own property. In fact, Mulvaney said, Doral would host the G7 “at cost.”

Yet it’s not apparent how the Trump Organization would ensure that it is the case. For instance, Mulvaney didn’t specify whether the company would refuse compensation and opt to pay for the event out of its own pocket. (The most recent G7 summit, held this year in Biarritz, France, reportedly cost French taxpayers north of $40 million—with previous summits in Canada and Italy said to have cost considerably more.)

It’s also unclear why it would choose to go to such lengths, given the extent to which Doral has struggled financially in recent years. In May, the Washington Post reported that the 643-room resort had been hit by declining revenues and profits between 2015 and 2017, with both occupancy and room rates well below competing resorts in its area. The New York Times, meanwhile, reported that Doral actually lost money to the tune of $2.4 million in 2014, the most recent year for which the Times was able to obtain documents specifying the Trump Organization’s profits.

That’s less than ideal, especially considering that the Trump Organization borrowed $125 million from its most prolific creditor, Deutsche Bank, to finance the resort’s acquisition and renovation. Like many of Deutsche Bank’s dealings with Trump, that loan remains shrouded in mystery; it’s unclear how much of the balance on the loan remains outstanding, or when it comes due for repayment. A spokesperson for Deutsche Bank declined to comment on the matter.

In a statement to Fortune, a Trump Organization spokesperson said the company is “excited to have been asked to host the 2020 G7 summit at Trump National Doral,” and described the resort as “a world-class facility with an unrivaled hospitality team.”

While accusations of profiteering are not new to the Trump administration—they continue to be raised about the goings-on at the Trump International Hotel in Washington, D.C., for instance—the move to hold such a high-profile event at one of the president’s own properties is raising eyebrows to an unprecedented extent.

Doral’s recent struggles could very well amplify the scrutiny. With the Trump Organization almost certainly still indebted on an underperforming asset, the revenues that would be generated by the G7 summit, both from the U.S. government and visiting foreign delegations, would likely be a boon to the resort’s shaky bottom line.

And besides the dollars and cents, hosting the G7 would undoubtedly boost Doral’s prestige and reputation—much as the president’s meetings at Mar-a-Lago, with the likes of Japanese prime minister Shinzo Abe and Chinese president Xi Jinping, have helped establish his Palm Beach, Fla., resort as the “Southern White House.”

But with congressional Democrats already kicking up a storm over the decision, it appears hurricane season is in full force at Trump’s Florida property.