Domino’s Delivers a Dilemma to the Supreme Court: A Website Accessibility Case That Could Impact Thousands of Companies 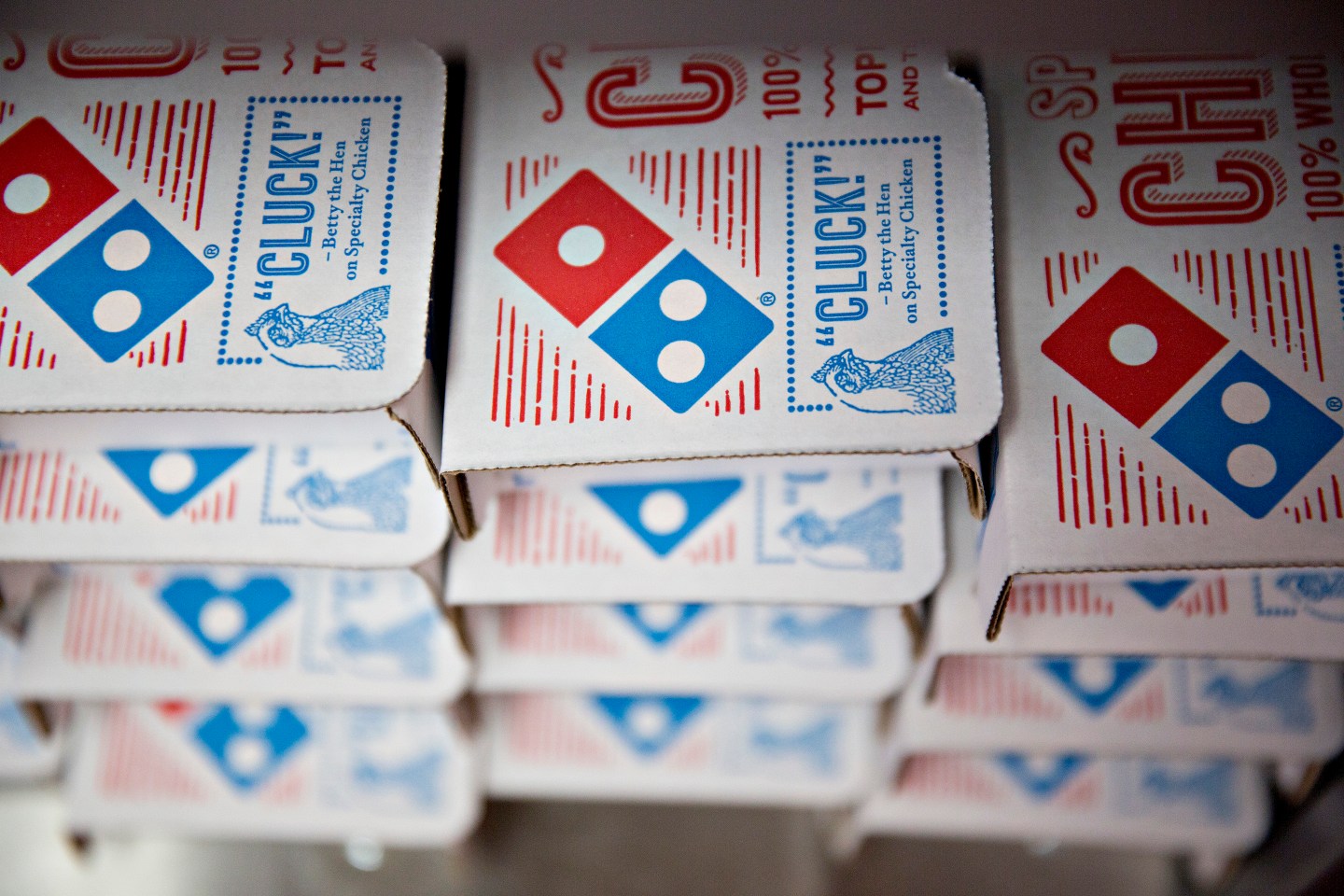 Boxes sit stacked at a Domino's Pizza restaurant in Rantoul, Illinois, U.S., on Thursday, Oct. 8, 2015. Domino's and other retailers want the Supreme Court to sort out ADA rules for blind-access to websites and apps.

Should companies be sued if blind people can’t access their apps and websites? The issue is a matter of civil rights, some claim, but others argue it’s a pretext for lawyers to shake down innocent businesses. Now, the Supreme Court could step in to settle the matter in a case involving Dominos.

Earlier this year, the pizza maker asked the top court to overturn a ruling by California’s 9th Circuit in favor of Guillermo Robles, a blind man who sued Domino’s after he couldn’t use its website or app to order a pizza.

As the Supreme Court decides whether to accept the case—a decision that could come as soon as Monday—tens of thousands of other businesses are watching the outcome closely. In 2018 alone, lawyers filed 2,258 lawsuits involving web access, and the number for this year could be even higher. The cases turn on whether companies are violating the Americans With Disabilities Act if visually impaired people can’t access their web sites.

These cases are just the tip of the iceberg says Angelo Amador of the Restaurant Law Center, which has filed a brief urging the Supreme Court to take up the Domino’s case. Amador says there are many more instances of companies receiving demand letters, and that many agree to pay $10,000 or $20,000 or more to avoid going to court.

Critics such as Amador say the website lawsuits are a new twist on an old hustle in which opportunistic lawyers orchestrate “drive-bys”—sending scouts to look for businesses that violate the ADA by lacking a proper ramp or bathroom rails, and then demanding a few thousand dollars to drop the case. In New York City, one lawyer is facing discipline after filing dozens of lawsuits against small eateries on behalf of wheelchair-bound clients without their knowledge or consent. Many of the same lawyers who have filed “drive-by” cases are also behind the recent surge in website lawsuits.

The business community, says Amador, is especially frustrated over the absences of guidance from the Justice Department in how the ADA’s instructions on accessibility—which were passed in a pre-internet era—should apply to digital properties.

In 2010, the Obama Administration promised to issue rules on how companies should make websites accessible to the disabled. But the rules never materialized and, in 2017, the Trump Administration formally cancelled the process.

This has added to the legal confusion, leading businesses to claim they are doing their best to accommodate blind customers online, but don’t know what standards they have to meet. Indeed, the National Retail Federation, which weighed in to support Domino’s, said in its brief that the Supreme Court’s own website appears to fall short when it comes to accessibility.

In a statement to Fortune, a Domino’s spokesperson touted the company’s development of voice-based ordering tools, like its Amazon Alexa pizza ordering skill, and said it supports federal legislation to create standards for accessible websites and apps.

“Creating a nation-wide standard will eliminate the tsunami of website accessibility litigation that has been filed by plaintiffs’ lawyers exploiting the absence of a standard for their own benefit, and chart a common path in meeting the accessibility needs of the disabled community,” said the spokesperson.

Who can participate in an online world?

Waiting for legislation is unlikely to satisfy visually-impaired people who are confronting an evermore digital world.

“This is about nothing less than whether blind people are able to participate in the society and economy of the 21st century,” says Chris Danielson, public relations director at the National Federation of the Blind.

Danielson says what’s at stake in the Domino’s case goes far beyond whether someone can order pizza. He points out that a growing number of daily activities—from applying for a job to taking a test or contacting a business—often takes place exclusively online. Denying people access to apps and websites, he says, is akin to denying them access to basic products and services.

Danielson’s argument is compelling but also raises the question of just how a business is supposed to make its digital properties accessible. The answer, it turns out, is complicated.

Currently, many blind people rely on computer applications called screen readers that function much like a browser. The tools, which are built into both Mac and Windows computers, as well as iOS and Android, read the code on a website and translate it into speech. Those with limited sight can also elect to have the screen reader project the website content onto a giant background.

An average web developer can easily code basic text to be read by screen reader software. These days, however, most sites contain much more than text—displaying everything from images to drop-down menus to forms to payment screens and so on.

It’s not hard for a developer to ensure all these extra elements can be interpreted by a screen reader—provided the developer is building the site from scratch. But in the case of older websites, which can contain millions of lines of code, the task is much harder.

Danielson likens the task of making blind-readable websites to designing wheelchair accessible buildings. If the building has not been constructed yet, the accessibility features can be drawn into the initial design. Retrofitting an old building, on the other hand, can be complicated and expensive. As a result of such complications, Danielson says companies that provide web-building tools like GoDaddy and SquareSpace should do more to inform their customers about the need to make their sites accessible.

Established companies, meanwhile, can use free automated tools like accessibilityswitchboard.org to see if their site’s code is accessible. Danielson warns, though, that these tools—which are often used by law firms in looking for companies to sue—can produce false positives, saying portions of a website are inaccessible even if they aren’t. He suggests companies approach the National Federation for the Blind or consultants who specialize in web accessibility to get a proper appraisal of their site.

Danielson adds that, while some lawyers have been unscrupulously exploiting the legal uncertainty over the situation, the NFB doesn’t expect companies to ensure their websites are perfect. Instead, the organization wants them to make a good faith effort to allow blind people to use them.

A legal question remains over whether the ADA even applies to websites—and just what companies must do if it does. And how the Supreme Court might respond to this issue is anyone’s guess.

But politically, it’s a bipartisan issue. “Historically, you haven’t been able to place disability rights on a left-right divide,” says Leslie Francis, a law professor at the University of Utah, who has written about the ADA.

She notes the original 1990 ADA law passed with bipartisan support under the first Bush Administration, as did a 2008 law that amended the law by strengthening the rights of the disabled.

Neither of these processes, though, provided guidance on how the ADA should apply to the digital world. As a result, the Domino’s Supreme Court dispute is likely to turn on the language of the original law—namely, whether a rule barring discrimination in “places of public accommodation” covers websites.

For some academics, it’s self-evident that websites should be covered. “As life is becoming more and more online, it seems completely reasonable that the internet should be covered and that people are being discriminated against if they can’t access a website,” says Lauren Edelman of Berkeley Law School.

Domino’s, however, argues that “public accommodation” refers only to physical places, and that any decision to expand the ADA rules to the web should be made by Congress not the courts.

While the Trump Administration could also provide guidance, a spokesperson for the Justice Department declined to comment on whether it will weigh in on the court case, or issue new regulations.

In the event the ADA rules do apply to websites, there’s also a question of how companies could avail themselves of an exception for situations that—in the language of the ADA—create “undue hardship” or would result in a “fundamental alteration” of their business.

According to Francis, the ADA does not require Domino’s to change the products it offers by, for instance, offering vegan or gluten-free pizzas to accommodate those with dietary restrictions. Nor, she says, would a company have to build a website if it didn’t already have one. But modifying an existing site to provide access to the blind very well could be considered a reasonable obligation, she said.

More broadly, lawyers agree that the question of how accessibility laws apply to websites is new legal territory. As for how the Supreme Court would rule if it takes the case, the court’s current make-up is decidedly pro-business, a factor that could favor Dominos. On the other hand, sympathy for business could be tempered by support for disability rights that, historically, has transcended liberal and conservative politics. Currently, the only judge on the court whose views might be predicted, says Francis, is recently-appointed Justice Kavanaugh, whose confirmation drew opposition from groups who declared him hostile to rights for the disabled.

In the meantime, as Dominos and others wait to hear if the Supreme Court will hear the company’s appeal, new website accessibility lawsuits are piling up. Indeed, one research company notes that, in the most targeted industries, such as retail and fast-food, many firms are being targeted more than once.

“Before you hold someone liable, they need to know what regulations you want them to abide by,” says Amador of the Restaurant Law Center. “There’s plenty of detail for the height and steepness of ramps, but nothing for websites.”